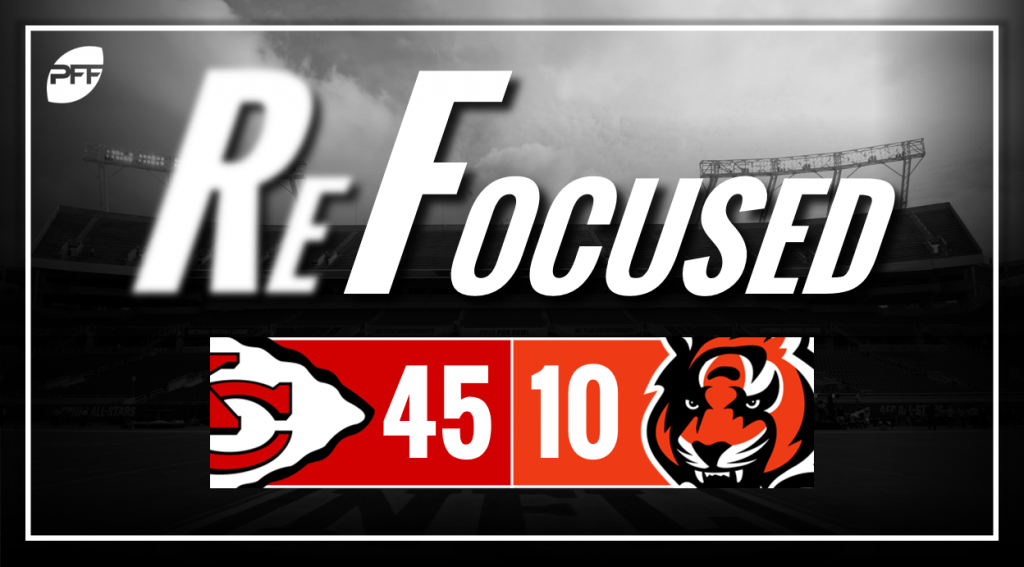 The Chiefs' offense ran wild against the Bengals. The quarterback play by Patrick Mahomes was mostly excellent, throwing for 358 yards and 4 touchdowns. However, he did have one interception and one dropped interception early in the game. Mahomes threw to open windows in the intermediate level off of RPOs with ease. And then took advantage of the speed of his receivers to take the top off the defense.

Kareem Hunt created multiple highlight plays. He broke multiple tackles, the biggest being when he broke a Dre Kirkpatrick tackle, gained another 20 yards and hurdled another defender. He averaged 5.7 yards per carry and added another 55 yards in the passing game.

It was a strong showing for the Chiefs' defense, as they shut out Green in the second half and limited the Bengals to under 250 offensive yards. Steven Nelson shut the door early with a pick-six of Andy Dalton to open up the second half.

The secondary did an admirable job in the second half to limit Green and the Bengals offense, as the likes of Orlando Scandrick and Kendall Fuller held Green to 7 receptions on 14 targets. It was tough to create consistent pressure against Dalton with his quick time to throw, but Chris Jones and Dee Ford were both able to record a sack on the night.

On a night where nothing went right for the Bengals' defense, the secondary took the brunt of the Chiefs' offense. The Bengals had no one who could keep with Tyreek Hill, and when the ball went to a different passing weapon, again the Bengals' defense was found wanting.

One of the few bright spots for the Bengals was Carl Lawson. The former Auburn standout played mostly on third down; however, he was able to use his speed to get some pressure and at least put Mahomes in some trouble.

It was a rough night for Dalton and the Bengals' offense going up against a defense ranked in the bottom half of the NFL. Dalton threw a pick-six among a number of other inaccurate throws and failed to extend his rhythm with A.J. Green into the second half.

Aside from AGreen, Bengals receivers struggled to make an impact, as Tyler Boyd, C.J. Uzomah and Alex Erickson combined for six catches. The ground game never found its legs with the offense falling behind early, and Joe Mixon ran 13 times for 50 yards.

The Chiefs' offense has so many weapons. No receiver gained over 95 yards, yet Mahomes threw for over 350 yards. The Chiefs' offense came at the Bengals in waves, and no matter where the ball went, a Chiefs player beat their coverage or a Chiefs running back broke a tackle.

It was another tough night for Dalton and the Bengals in prime time. The game got away from them quick as they fell behind early. Credit goes to the maligned Chiefs defense, which stepped up and took advantage of Bengals mistakes.