The Houston Texans defeated the Dallas Cowboys, 19-16, in Week 5 of NFL action. 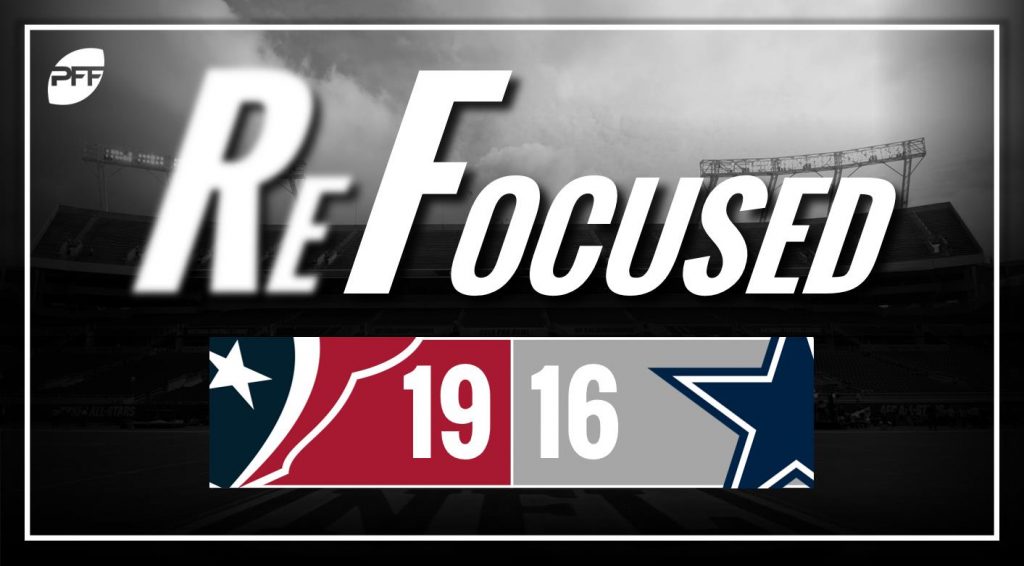 The Texans' defense played great all night, and the secondary should get a lot of the credit. Cowboys receivers had a tough time creating separation, and two pass breakups resulted in interceptions. Kareem Jackson and Johnathan Joseph combined for five passes defensed.

The combination of J.J. Watt and Jadeveon Clowney is a tall task for any offensive line, and the Cowboys had their struggles against the Houston duo. They combined for two tackles for loss and pressured Cowboys' Dak Prescott throughout the night, racking up a combined 1.5 sacks.

After three weeks of 300 yards, against the Cowboys, Texans second-year signal-caller Deshaun Watson kept the streak alive. Facing multiple big hits, Watson managed to find Deandre Hopkins for a first down. After the catch, Hopkins broke three tackles and put the Texans into field goal range to win the game in overtime.

Hopkins was clearly the best player on the field, catching nine passes for 151 yards and also a drawing a defensive pass interference. When Texans needed a big play, he was the one to come up with it.

In a thrilling Sunday night game, Prescott put on a great show. He found himself scrambling on numerooccasionsons and was able to avoid a sack on a few plays, in one circumstance avoiding a sack twice then finding Tavon Austin on a 44-yard pass. He ended up going 18-of-29 for 208 yards, but a less mobile quarterback may have had a tough time keeping his team in the game.

The Cowboys tried feeding thier horse, as running back Ezekiel Elliot carried the ball 20 times. However, holes closed up quickly, and the stout Texans front seven shut down the Dallas ground attack. Elliot finished with 54 yards on 20 carries while also contributing in the passing game, catching seven passes for 30 yards.

With Sean Lee out of the game, Jaylon Smith and rookie Leighton Vander Esch were active in the run game, coming downhill and recording a good number of tackles for a short distance.

While Bryon Jones was unable to contain Hopkins, he managed to force Hopkins to make some very tough contested catches with Jones' hand in between Hopkins and the ball. But when it came to it, Hopkins was just too strong at the catch point.

The highlight will be the Hopkins' catch and run, but he torched the Cowboys' defense all day long, making play after play to extend drives.

Prescott did all he could to keep the Cowboys in the game, but in the end, the Texans combination of Watt and Clowney combined with their secondary proved too much.