The Cincinnati Bengals defeated the Miami Dolphins, 27-17, in Week 5 of NFL action. 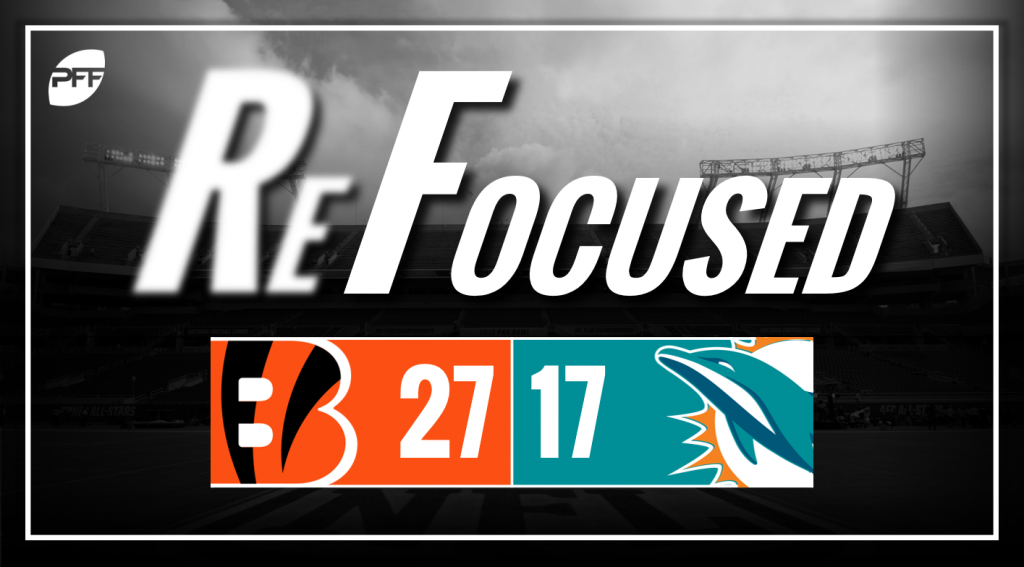 When the Bengals offense needed to make something happen, they often found themselves following a tried-and-true formula for success: line A.J. Green up in the slot against man coverage and let him run a crossing route over the middle. Green consistently got separation over the middle of the field throughout the game, hauling in six of 10 targets with all six of his catches resulting in a Bengals first down.

The Bengals offensive line did a good job at keeping Andy Dalton on his feet in this one, but it wasn't a perfect game in pass protection. When Dolphins pass-rushers opted to use a bull rush to power through Bengals offensive linemen, they were able to get some good push, which compressed the pocket and eliminated the opportunity for Dalton to climb.

Cincinnati's talented defensive line took over in the second half. Geno Atkins was his usual dominant self. Carl Lawson was the primary beneficiary of Laremy Tunsil‘s departure and repeatedly beat the backup late in the game. And, of course, Carlos Dunlap effectively put the game out of reach late with a strip sack that was returned for a score.

William Jackson III bounced back from a rough outing in Atlanta last week, forcing multiple incompletions in the first half and surrendering little in the way of positive plays when he was targeted in coverage.

After holding up well through the first half, the wheels fell off Miami's pass protection in the second half, particularly on the left side once Laremy Tunsil exited the game. Sam Young, who filled in for Tunsil at left tackle, and Ted Larsen were losing, and losing quickly, which gave Ryan Tannehill few clean pockets to work from.

With the pocket collapsing around him, Ryan Tannehill broke under pressure in the fourth quarter. He was unable to push the ball downfield at all, with most of his completions coming on screens or checkdowns behind the line of scrimmage.

Miami's pass-rush woes continued this week as they struggled to get decisive pressure on Andy Dalton. They were still able to get some pressure on Dalton by compressing the pocket, but they struggled as a whole unit when it came to shedding Bengals linemen.

Cincinnati: Cincinnati struggled to score early, but they were still able to find some success at moving the ball, allowing their defense to rest upon the sideline. They were finally able to break through and get into the end zone to start the fourth quarter, and from there, they were able to lean on the defense to finish the job.

Miami:  Geno Atkins & Co. along the Bengals defensive line dominated in the second half, and the poor decisions and turnovers they forced were ultimately the difference in the game.