The Miami Dolphins defeated the Oakland Raiders, 28-20, continuing the third full week of action in the NFL. 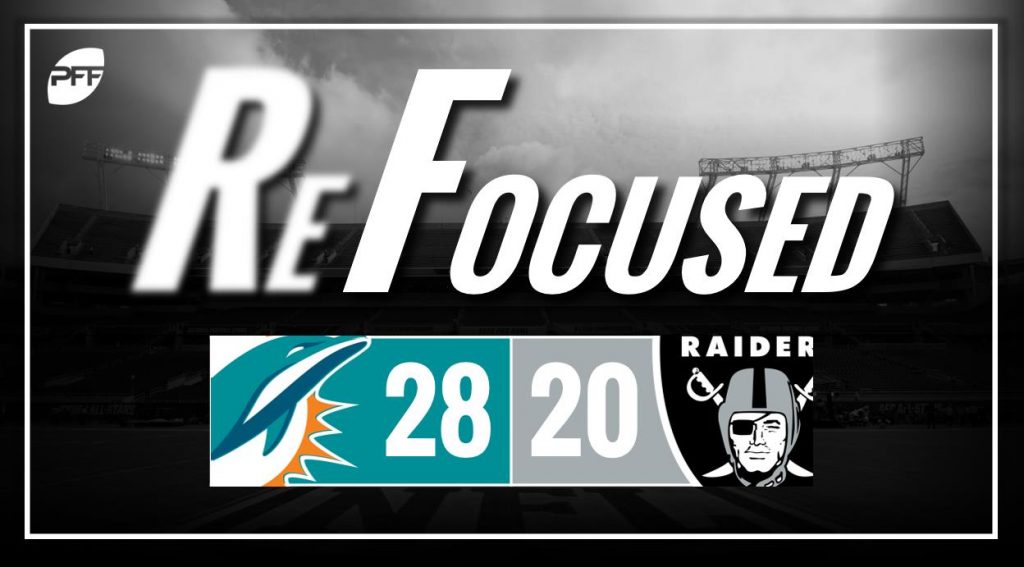 The biggest play of the day for the Dolphins defense was undoubtedly Xavien Howard‘s fourth-quarter interception in the end zone as the Raiders were threatening to take the lead. Howard stayed on top of Martavias Bryant and then high pointed the ball to come away with the interception, which was the turning point of the game.

The weak spot of the Dolphins' defense is likely the linebacking core. Chase Allen, Kiko Alonso and Raekwon McMillan all struggled in run defense, getting picked up too easily at the second level. While not a massive hole at this point, it is certainly an area where improvement is needed.

Ryan Tannehill had his best game of the season on Sunday against the Raiders. His overall numbers will be inflated by a pop pass that went for a long touchdown, but he had a couple of long connections: one to Kenny Stills for a touchdown and another down the sideline to Devante Parker. Those throws, in addition to having no turnover-worthy plays, led to Tannehill's best day of the season.

The biggest highlights of the day came from Miami's small, speedy wide receivers, Albert Wilson and Jakeem Grant. Both were responsible for long touchdown catches, where they utilized their track-like speed. Grant's came on a trick play, where he was lined up in the backfield and the trick play wide receiver pass from Wilson resulted in a busted coverage. Grant's speed took it from there. Wilson's speed broke the game open two plays after Howard's interception, as his 74-yard pop pass put the Dolphins up two scores and all but sealed the Raiders' fate.

Not much went right for the Raiders' offense on Sunday, but one potential positive was the Derek Carr-to-Jordy Nelson connection. Early on, the pair benefitted from a couple of busted coverages, but Nelson was also able to get open up the seam for a huge gain. With Carr still getting used to some of his new receivers, it seems that Nelson may have picked up his trust the quickest.

The once vaunted Raiders' offensive line now looks just ordinary, and the right tackle spot can be added as the second Black Hole for the Raiders. Donald Penn started the game and was noticeably poor. He was replaced early on by TJ Clemmings, who wasn't a huge improvement. With the amount of money being spent on the Raiders' offensive line, it is certainly performing well below expectations.

The Raiders' solid defensive effort will be marred by its busts. Linebackers Tahir Whitehead and Marquel Lee were both responsible for busted assignments on long Dolphin touchdowns that were absolutely brutal plays to give up.

After trading Khalil Mack, the Raiders' pass-rush issues are well noted. A positive to take away from this game was the Radiers having solid pass coverage from their starting corners. Dominique Rodger-Cromartie, Gareon Conley and Leon Hall all had positie impacts on the team, while the biggest plays of the day were at the fault of other units. Without the help of a good pass-rush, the coverage on the outside is certainly one positive takeway from this tough loss.

A tip of the cap goes to Adam Gase, as he utilized his skill players in roles where excelled the most. None of the Dolphin receivers' names pop off the roster sheet, but he is playing exactly to their strengths. This was shown by the long passes to Stills and Parker, while the speed of Grant and Wilson on more exotic plays broke the game open.
Oakland:

Long plays given up by the Raiders will go down as the biggest reason why they lost a very winnable game in Miami. The defense put up a solid overall effort but let up two plays of 50-plus yards and another 34-yard touchdown. The Dolphins did not sustain many long drives, but the Raiders cannot afford to give up these long touchdown and win on the road.