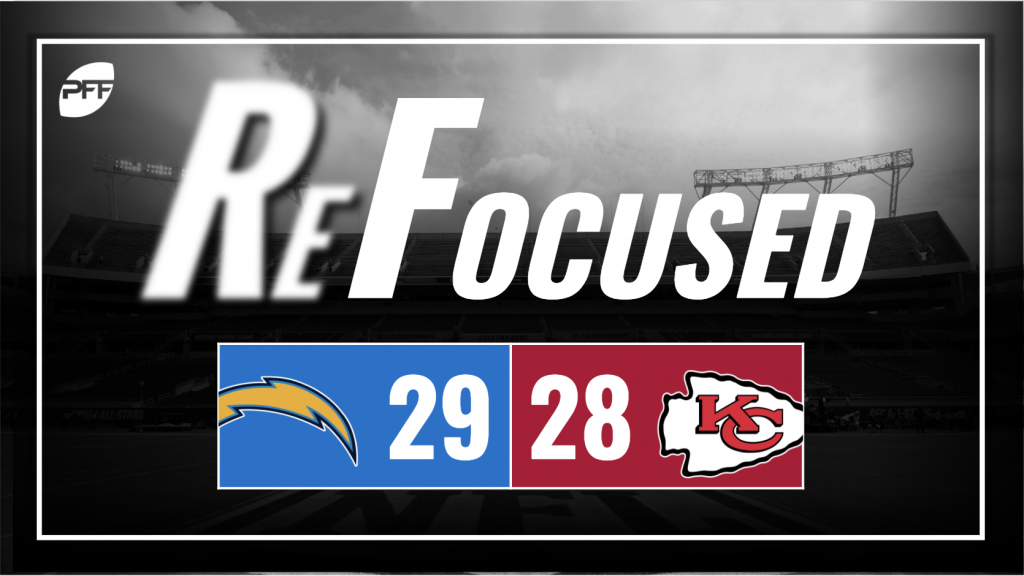 Maybe it wasn't as good of a night as we've come to expect for some of the Chargers' elite players in the secondary, but they did manage to hold Travis Kelce to 61 yards, his third-lowest total of the season.

LA did a pretty good job defending the Chiefs' run-pass option plays, never really giving up any big gains on those. But they did struggle to keep designed screens contained, leading to big plays and points on the scoreboard.

It was a game of many ups and downs for Philip Rivers. His first throw of the night was underthrown and intercepted. He had two more inexplicable throws to defenders on the night, one of which was intercepted in the back of the end zone. In the end, Rivers led his team on two well-managed touchdown drives that won the game for the Chargers. The best throw of the night came on fourth down where he laid it out perfectly for Travis Benjamin with the game on the line.

The Chargers top wide receiver Keenan Allen went down early with a hip injury, and none other than the Chargers 2017 first-round pick Mike Williams stepped up in a big way. Williams caught both of the Chargers receiving touchdowns, ran another in on an end-around and caught the final game-winning two point conversion.

The Chiefs replaced their production at running back against the Chargers. They set Damien Williams up with a few screens, helping him eclipse 100 total yards in the first half on just nine touches. He added two rushing touchdowns in the second half to cap off his night.

It was a pretty good night as usual for Patrick Mahomes. His deep throw to Tyreek Hill in the fourth quarter was excellent but won't show up on the stat sheet with it being dropped in the end zone and the play being nullified anyway, but he did make a few nice deep throws to go along with racking up a bunch of passing yards on screens. He also helped keep the Chargers' pass-rush at bay a bit with snap counts, drawing LA offsides several times.

With all the great play that was happening offensively on Thursday night, it's shocking that an interior defensive lineman may have stood out the most. Chris Jones did just that with an Aaron Donald-like performance. Jones indiscriminately beat the Chargers' offensive line with his pass-rush on more plays to count. Jones was the best player on the field Thursday night.

The Chiefs also got another high-level performance out of another pro-bowler, but it was hard to notice with Jones' dominance. Justin Houston consistently beat up on Chargers' Sam Tevi rushing the passer and had one of his best games of the season.

Rivers overcame early turnovers and constant pressure to deliver two huge drives down the stretch to win the game for the Chargers.

The Chiefs extended their streak of scoring at least 26 points in every game this season, but their defense couldn't make a stop on the final drive of the game to seal the win.