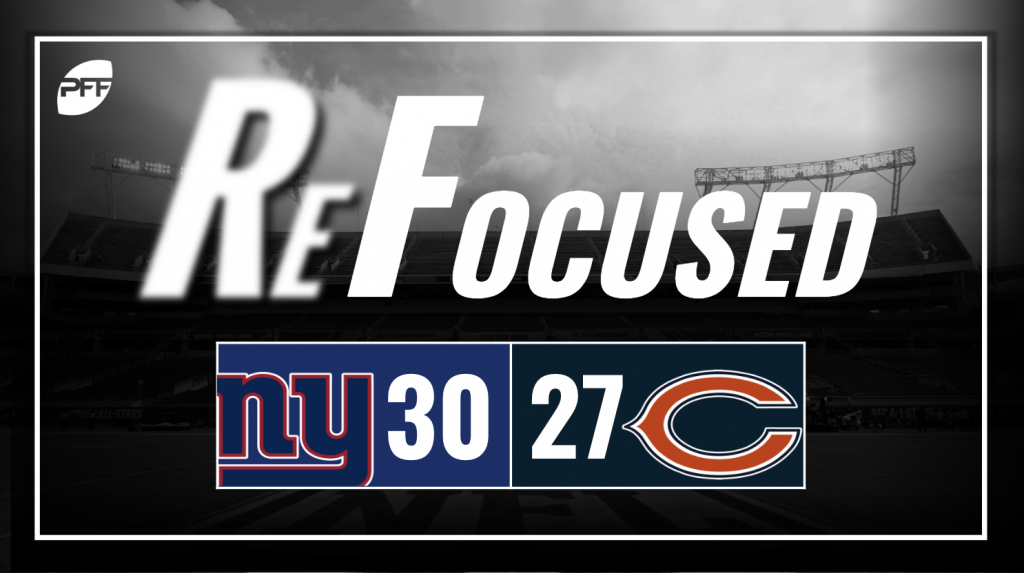 The Giants' pass-rush turned up in a big way against the Bears with huge contributions from multiple players. Olivier Vernon led the way off the edge with relentless pressure allied to multiple sacks and a batted pass in a busy display. B.J. Hill racked up three sacks and multiple pressures while fellow rookie RJ McIntosh made an impact that belied his low snap count in his second career game.

The coverage team wasn't to be outdone by the pass-rush unit either with Alec Ogletree and Janoris Jenkins providing decisive contributions. Ogletree's two interceptions were crucial to establish the lead early in the game, and Jenkins broke up more passes than he allowed to be completed into his coverage, including the final play of the game to clinch the win.

Saquon Barkley continues to turn in not only production but high-quality performances on the ground, showing the kind of patience and discipline following his reads from his OL that some doubted he possessed. Barkley still rips off the big gains, but doing it from within the structure of the run makes him all the more dangerous as a runner.

Odell Beckham Jr. was central to the plot of this game, as he so often is, and ultimately he can write a positive story after his failure to fall on the Bears' onside kick. A receiving touchdown and his second passing touchdown of the season led to that point, but immediately in overtime, he showed his willingness to push the Giants forward, getting a piece of two Bears defensive backs to spring Barkley up the right sideline that set the Giants on course to victory.

Tarik Cohen stole the show through the air, racking up the receiving yards against the Giants' safeties, especially with big plays on wheel routes against Landon Collins — the highlight of his performance as a receiver. His cameo as a passer tied the game but ultimately the Bears came up just shy and it was the third phase of passing that he came up short on that decisive play, surrendering pressure to Ogletree to put Chase Daniel under pressure as he let fly for Taylor Gabriel.

Daniel had an inconsistent showing, ultimately coming up just shy as the Giants' defense made enough plays in coverage against him to thwart the comeback.

Akiem Hicks contributed a full stat sheet against the Giants; a rushing touchdown, a bevy of stops in the run game, a fifth sack of the season and his first batted pass of the season. After a subpar display against the Lions on Thanksgiving, Hicks was back to his best today.

Khalil Mack was just held shy of making that decisive, game-winning impact against the Giants, but after a longer rest off of the Bears' Thanksgiving win, Mack showed he is rounding back to full health. Just the one sack this week, but Mack racked up the pressures against the Giants' offensive tackles and forced Eli Manning to get the ball out quickly to spare further hits and sacks.

The Giants went deep into the bag of tricks to establish their lead and almost threw it away on a botched special teams play. Ultimately, their pass coverage made just enough plays to see the game home.

Mack and Hicks both played well on the defensive side of the ball, but Daniel's play on offense wasn't enough to get the job done.