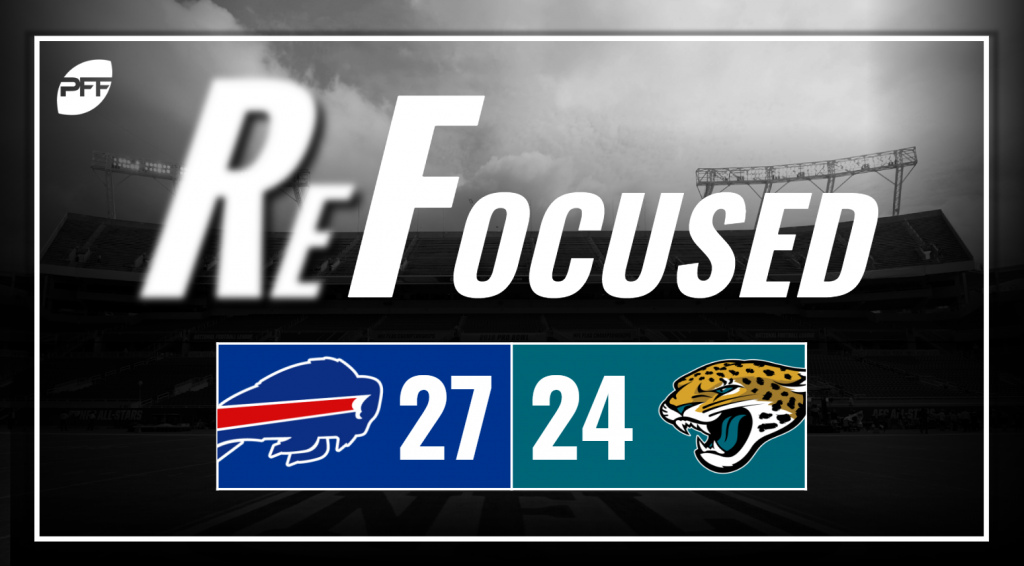 It was a solid day for the big bodies in the middle of the defense for the Buffalo Bills. Kyle Williams and Jordan Phillips took advantage of injuries to the Jaguars interior and won in run defense.

While the Bills couldn't get consistent team effort rushing the passer, Jerry Hughes stood out as the lone effective pass rusher. Hughes won his matchup consistently against backup Ereck Flowers and force Bortles to move up in the pocket.

Josh Allen played his first game back since Week 6 and showed the value that he can provide. Allen threw one of the best passes you will see all season being hit as he released the ball and still getting the ball downfield, which Robert Foster took for a 75-yard touchdown. Outside of that, the ability to move the ball on the ground paid big dividends when he broke for a 45-yard scramble in the fourth quarter to help put the Bills in a position to win the game

The Bills' ground game struggled to get going for another week, as LeSean McCoy averaged just 2.7 yards per carry, and his longest run of the game was a meager seven yards. With the Bills' offense relying on big plays, the Jaguars defense was able to load the box and prevent any rushing lane opening up.

It was not much of a modern offensive game plan from either offense in Buffalo. The Jaguars looked to pound the ball on the ground. Leonard Fournette was effective out of the backfield for the Jaguars for the majority of the day. He got north and south and burst through the line. Fournette was then later thrown out of the game for fighting, marring his solid day.

Since it is 2018, the Jaguars needed to get something out of their quarterback in order to be effective, and they just did not get much out of Blake Bortles at all. While neither of his interceptions was extremely poorly thrown (one was a drop), he was unable to connect on a regular basis with his receivers, only completing 12 passes on the day.

In a losing effort, Calais Campbell showed his pass-rushing skills, as he beat the Buffalo offensive line in multiple ways and lined up either on the outside or in the interior. Even though the Jaguars did not record a sack, they still managed to record a significant amount of pressure.

The Jaguars' secondary held up well against the Bills' offense. The only significant play they allowed was a the75-yard touchdown that Barry Church was beat on. Outside of that play, they only allowed one recpetion over 20 yards and that was to Kelvin Benjamin early in the game.

The Bills needed some big plays to pull out this vicotry, and none was more important than the 75-yarder to Foster. All three of the Bills' touchdown drives had five or fewer plays, as they got chunk plays to put them in position to take the win.

The Jaguars were just unable to produce much of anything throwing the football. 12 completions is just too few to effectively win a game nowadays.