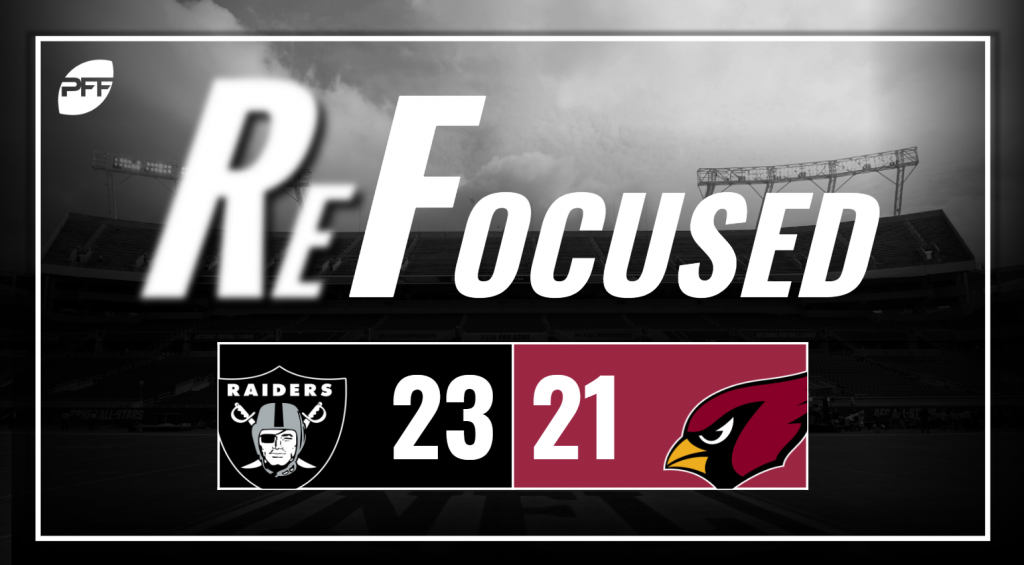 The Raiders only passed the ball when they had to, which was after they fell behind because of continually trying to run the ball ineffectively. Quarterback Derek Carr had an average game but delivered when it mattered most on the final drive of the game highlighted by a big-time throw.

Rookie left tackle Kolton Miller had his hands full against Chandler Jones, as he struggled to block him all game long. It's been a rough year for the former UCLA Bruin, as he's struggled in both pass protection and as a run blocker. Against Jones, it was the run game where he had his problems.

Arizona didn't pass the ball often, but even still, the Raiders did not get much pressure on the quarterback. They had only one sack in the game and didn't knock down Rosen any other time. They continue to struggle to create pressure after trading Khalil Mack and cutting Bruce Irvin and haven't been able to make up for it schematically either.

Defensive tackle P.J. Hall was one of the standouts for the Raiders' defense, as he was one of the few to create record multiple pressures and also made a couple big stops in run defense.

The Cardinals' defense played well enough to win the game. Josh Bynes dropped a sure-fire interception deep with the Raiders backed up against the own end zone that would have sealed the game. On the game-winning drive, the Cardinals called an all-out blitz on 3rd and 10 with Carr throwing a quick out screen to seal the game.

Despite giving up just his second touchdown on the season, Patrick Peterson was lockdown the rest of the game, allowing just three catches for 20 yards and collecting a pass breakup. Peterson once again is grading out as a top-10 cornerback and should receive offseason accolades.

Arizona went run-heavy on offense, with 32 rushes compared to 22 pass plays. David Johnson carried the bulk of the load with 25 runs for 137 yards, both season-highs along with his longest run of the season at 53 yards. He did so behind an average night from the offensive line and other blockers, who weren't giving Johnson any exceptional holes often.

With the running game largely working, Josh Rosen threw the ball 20 times, completing just nine for 136 yards. Even with a couple of interceptions, he did play better than the stats may suggest, with three touchdowns and multiple dropped passes on the night.

It was a back-and-forth game but ultimately decided by Carr hitting Marcel Ateman for a big-time throw on the team's final offensive drive to set up the game-winning field goal.

It looked like the Arizona offense was going to do enough to hold onto a win, but penalties on their final drive eliminated a touchdown that likely would have sealed the game, and instead the drive stalled with enough time for Oakland to drive down the field.