The Jacksonville Jaguars defeated the Tampa Bay Buccaneers on Thursday evening, 25-10 continuing the fourth full week of preseason action in the NFL. 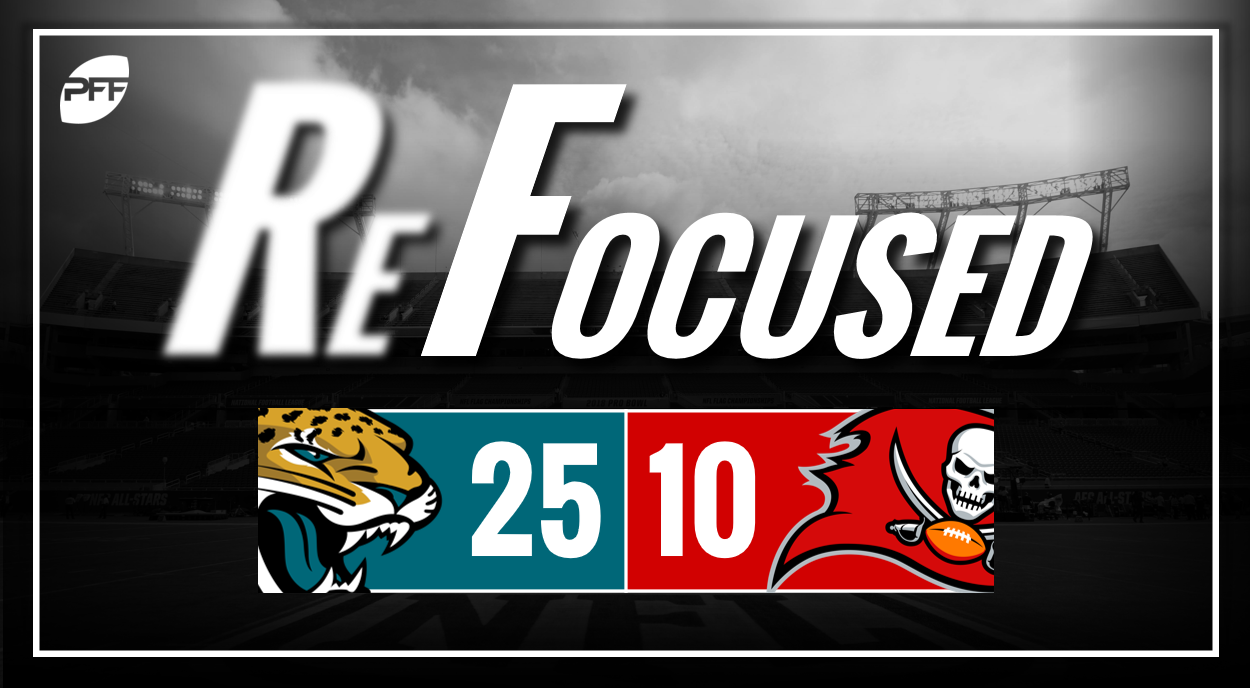 Hunter Dimick had a very productive game in the second half vs Tampa Bay, both against the run and when rushing the quarterback. The most impressive sequence of the night for Dimick came midway through the third quarter when he pressured the quarterback on back-to-back plays. The sheer strength that Dimick has in his upper body makes him difficult to control at the line of scrimmage.

The Bucs tried their best to pick on Jalen Myrick in coverage. Myrick was the most targeted Jaguars defender in this game, and while he struggled at times (allowing a TD when in coverage against Justin Watson), he also made a few impressive plays on the ball as well with a couple pass breakups to his name.

Quarterback Tanner Lee looked good when throwing deep on go routes. In the third quarter, he completed two perfectly placed deep passes to Montay Crockett that went for a combined 70 yards. He had good ball placement on a deep pass in the fourth quarter that was caught out of bounds and threw two other go routes that were incompletions due to incidental contact between the receiver and defensive back.

Undrafted rookie Tony Adams played the entire game at center and showed flashes of both very good and very bad play. He successfully pulled off difficult reach blocks but also had some ugly plays, including a low shotgun snap that caused a fumble and a penalty. If he can clean up sloppy play, the Jags may find a good player in the young rookie.

Ronald Jones was left with very little to work with on the ground as the run blocking in front of him was dreadful to start the game. Alex Cappa was manhandled for much of the first half while lined up at left guard. On the bright side, he looked a bit better in the second half while playing center,  as he demonstrated a couple quality combo blocks with guard Ruben Holcomb.

The consistency of Bernard Reedy was put on display tonight. Reedy gained eight-plus on nearly every target he saw against Jacksonville. Reedy showed strong hands at the catch point and took everything that was given to him by the defense. Reedy was the most reliable offensive performer for the Buccaneers.

Defensive tackle Jerel Worthy was a force against the run on Thursday night. Worthy demonstrated great power and an ability to drive offensive linemen into the backfield. One of his standout plays came late in the first quarter when he drove Jacksonville's right guard into the backfield, which forced the running back to change direction. He then chased the back down and tackled him for a one-yard gain.

Jacksonville: The Bucs' defensive line frequently bullied the Jaguars' offensive line throughout the game, though more so again the run than as pass-rushers. If these players can replicate this level of performance, then, considering that they're backups and will be playing behind the likes of Gerald McCoy, Vinnie Curry and Jason Pierre-Paul, the Bucs look to have excellent talent along the defensive line and perhaps some of the best defensive line depth in the NFL.

Tampa Bay: Jones and the Bucs' offensive line continued to struggle, a sign of worse things to come for an offense in desperate need for a strong rushing attack in 2018.