The Green Bay Packers defeated the Tennessee Titans on Thursday night, 31-17 opening the first full week of preseason action in the NFL. 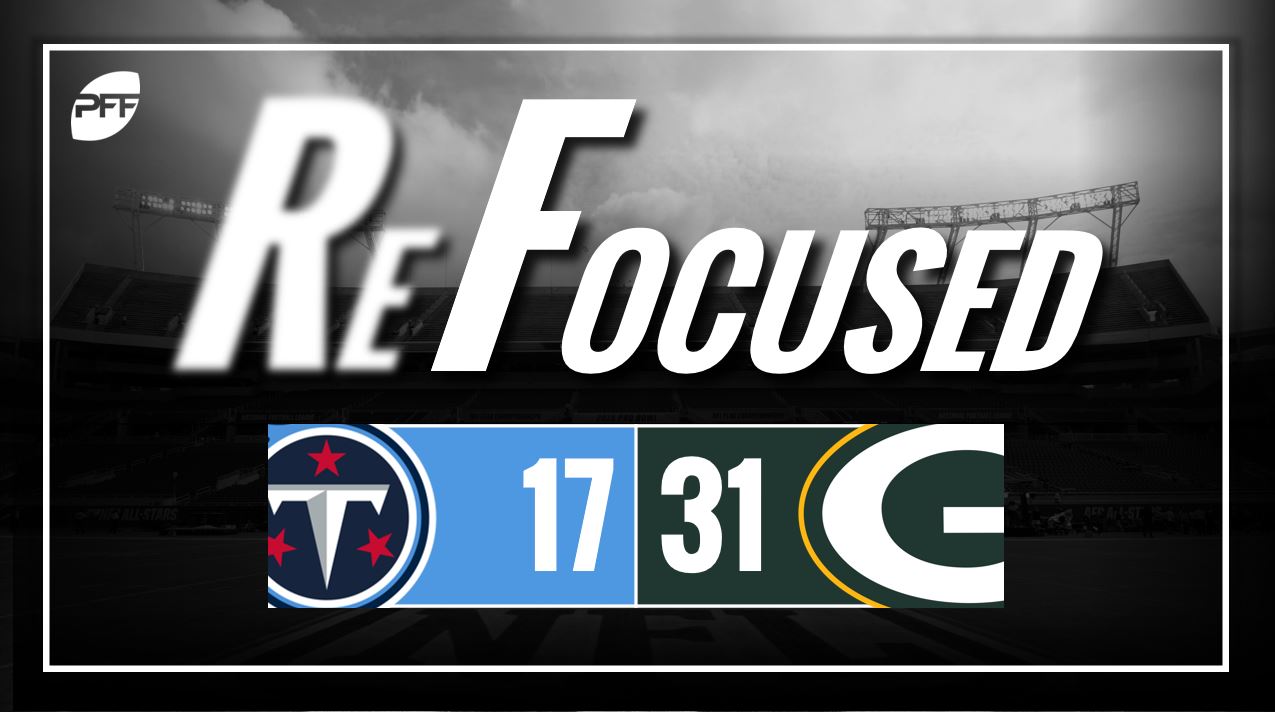 With the Titans' starters playing just the opening drive, they spread the ball around to several rookies. Four different rookie wide receivers had at least one catch for 13 or more yards, led by Devin Ross‘ 31 yards on two catches. Rookie running back Akrum Wadley had a few impressive plays on his team-high 12 touches, but unfortunately he also fumbled the ball once that led to a turnover.

Even while playing against the lower half of the depth chart, rookie QB Luke Falk was fairly unimpressive on the night, despite throwing a touchdown and not turning the ball over. He was off-target on several throws and made a couple catches harder than they needed to be due to less than ideal accuracy.

The Tennessee Titans landed one of the steals of the draft when they selected Harold Landry with the 41st overall pick in the 2018 NFL Draft. Landry, the number 12 player on our final PFF Big Board back in April, wasted no time getting to the quarterback, recording a sack and forced fumble on just his second defensive series as a pro. The former Boston College star would add another quarterback hurry before exiting for the night with 19 snaps played in his debut.

Cornerback LeShaun Sims was by far the most impressive coverage defender for a unit that was picked on all night by Packers’ quarterbacks. Sims recorded two passes breakups, none bigger than his play on a fourth-down end zone fade route at the end of the first half.

Brett Hundley started at quarterback for the Packers and was effective in his limited playing time, leading the offense down the field for a touchdown on the first drive of the game. The highlight of the drive was a 48-yard connection to Davante Adams with free-agent Malcolm Butler in coverage for the Titans.

The Packers’ running game was non-existent for the most part, averaging just 2.8 yards per carry and struggling to make defenders miss. The longest run of the night came late in the fourth quarter when Akeem Judd was able to get out on the edge for an 11-yard gain.

Rookie cornerback Josh Jackson was one of the steals of the draft, but his first NFL outing could have gone better. He was called for a holding penalty while in coverage early in the game, and then had a pretty bad missed tackle against the run later on. That said, he was targeted a couple times where he was also in lock-step with the receiver to tighten down the target window.

Generally, the defense played pretty well against the run, allowing under four yards per carry on the night and didn't miss many tackles. There were times where the Packers' interior defensive linemen were getting moved vertically quite a bit though, particularly Joey Mbu and James Looney, that was making it harder on the linebacking corps to flow and find the ball carrier.

Tennessee: The young receiving corps looked pretty good against Green Bay. They had seven different receivers have at least one first down, and three players with 20-plus yard receptions. Given that neither Falk nor Blaine Gabbert were all that accurate, it was a decent outing up and down the receiver depth chart.

Green Bay: The offense racked up 372 yards through the air despite completing just 25-of-45 passes. The 14.9 average per completion stands out tonight and should have Packers fans hopeful that the unit can continue to create big-plays moving forward.