Beyond providing data for all 32 NFL teams, PFF also supports network broadcasters with game-preview packets that are used to enhance the in-game experience for fans and viewers. This Ravens-Steelers preview features the same information our broadcast partners use for team research and in-game production.

Joe Flacco is coming off a 2017 season in which he targeted ‘go' routes just 27 times, which produced just 190 passing yards. In three games this season, Flacco has already thrown nine passes to ‘go' routes, and he has already amassed 65 passing yards on such throws.

Wide receiver John Brown has started the season as one of Flacco’s favorite targets, especially downfield, where Brown leads the league in targets from passes that traveled 20 or more yards in the air. He already has 139 deep receiving yards, after having 143 over the previous two seasons. 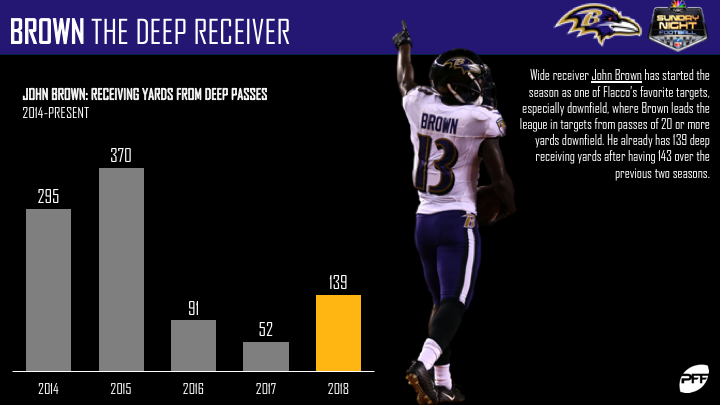 Smith piling up the pressure

Za'Darius Smith has been a menace for opposing offenses so far this season. Through three games, he's already produced 13 quarterback pressures, which is tied for the seventh-most among edge defenders. 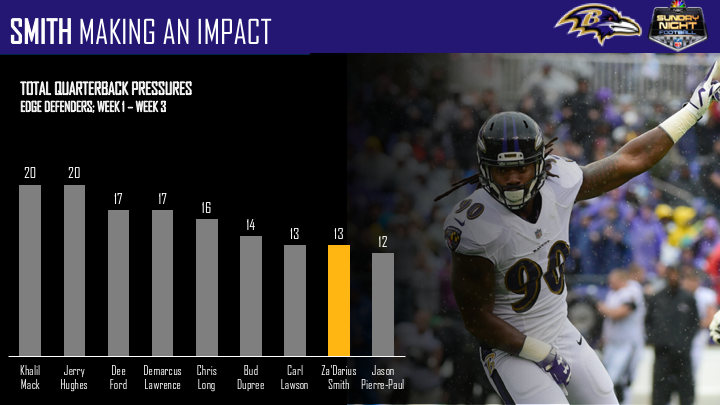 Marlon Humphrey has picked up right where he left off a season ago. Through three games, he's allowed just 0.37 yards per coverage snap, which is the sixth-best mark among cornerbacks.

Juju making noise from the slot

JuJu Smith-Schuster is quickly becoming a vital cog in the Steelers passing attack. Through three weeks, he's spent 87.6% of his snaps in the slot and has produced 280 slot receiving yards, the most among receivers. 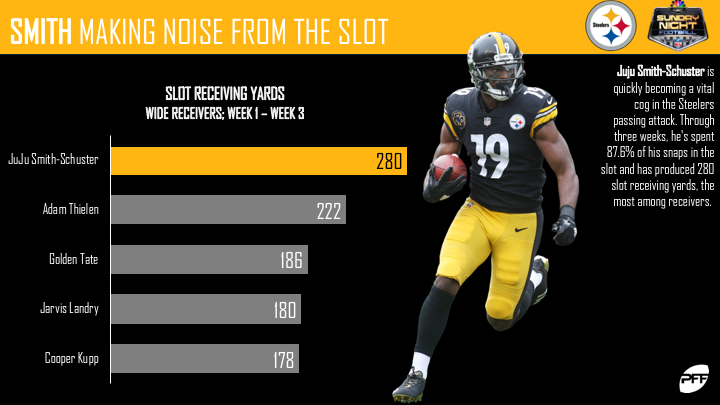 Veteran tackle Alejandro Villanueva has performed exceptionally well in pass-protection so far, and he'll need to keep it up against Baltimore's talented edge-rushers. Through three games, he's allowed just three quarterback pressures on 151 pass-blocking snaps and currently ranks fourth among tackles with a pass-blocking efficiency of 98.3. 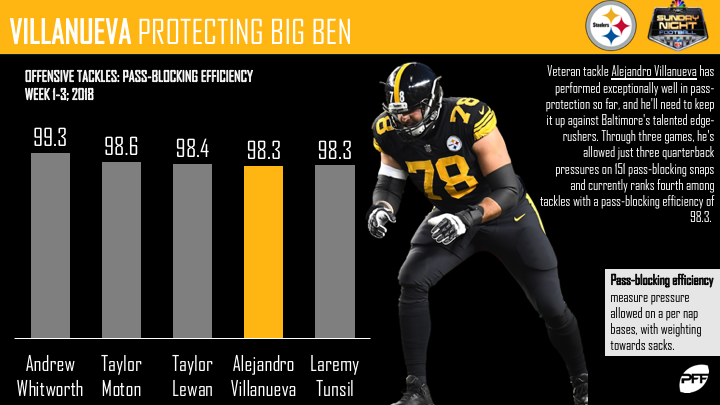 Struggling to defend the deep ball

So far this year, the Steelers defense has allowed 325 yards from deep passes, which is the second-most among defenses this year. Joe Flacco and John Brown should test the Steelers secondary early and often on Sunday night.

Through three weeks, Steelers edge defender Bud Dupree has been a bright spot for the team's defense. He's already tallied 14 total pressures on 121 pass-rushing snaps and will look to add to that total on Sunday night.

PFF Greenline has projections for the spread, moneyline and over/under of the Baltimore Ravens' matchup with the Pittsburgh Steelers. Get its picks here.