The 22nd overall pick of the 2014 draft has been out of the game since a pretty spectacular personal and professional meltdown, but recently threw the ball at Texas A&M’s pro day and then took part in the Spring League, giving NFL personnel a first glimpse of his play on the field since 2015.

The former first-round pick has spoken about his problems while with the Cleveland Browns recently, and while he took responsibility for his failures, he also placed some blame with the organization for not understanding that the red flags he came into the league with were very real. Manziel entered the draft a raw talent, one that at once existed in and thrived outside of the structure of the offense in the SEC. How he translated to the far more rigid confines of an NFL offense was always going to be up for debate and determine his success or failure to some degree.

Manziel’s tendency to play outside of structure continued in the NFL, only it was markedly less successful than it was in college. In 2014-15, he completed just 35.9 percent of his passes when out of the pocket, throwing four picks (with one more dropped) to just three touchdowns, posting a passer rating of just 47.2, 25.0 points lower than his overall career passer rating. That number was about the same amount lower than the average passer rating that NFL quarterbacks managed from outside the pocket in 2017. 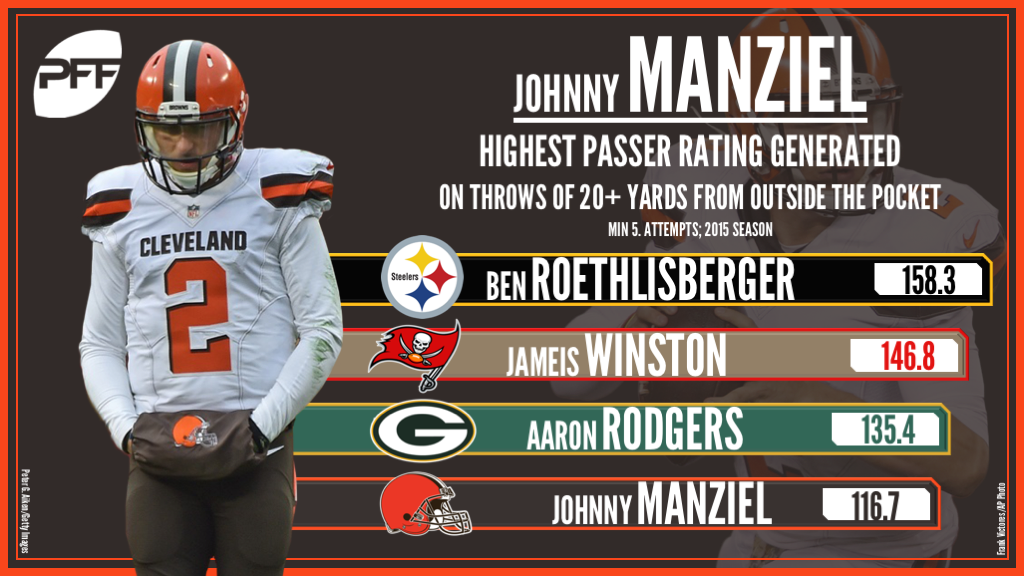 When he actually stayed within the pocket, he was notably better. He completed 62.7 percent of those passes, and his passer rating was 81.5 (though that was buoyed by five dropped interceptions which would have cut the passer rating by 10.0 points had they all been secured by defenders).

None of those numbers are great and grading wise, Manziel struggled badly during his time in the NFL. He had an overall PFF grade of 52.4 as a rookie and then on a larger sample size, a mark of 61.7 in 2015. That grade included a passing grade of just 48.3, which would have ranked 36th this season, just one spot above DeShone Kizer. He dragged his overall grade up thanks to his work rushing the ball, as he scrambled 27 times for 189 yards (7.0 yards per attempt) and broke five tackles to get 78 yards after first contact on those runs.

It isn’t all factory of sadness material with Manziel though, and what makes his comeback intriguing in a quarterback-starved league is the upside. Manziel did have good games during his Browns stint and they flashed a potential that was never reached because he wasn’t working hard enough while he was running his life off the rails personally. He had game grades of 81.9 against the Steelers and 80.6 against the 49ers in 2015. He had a big-time throw rate of 2.9 percent during his time with the Browns, almost exactly the 2017 league average, and he added value with his scrambling ability and success rate. 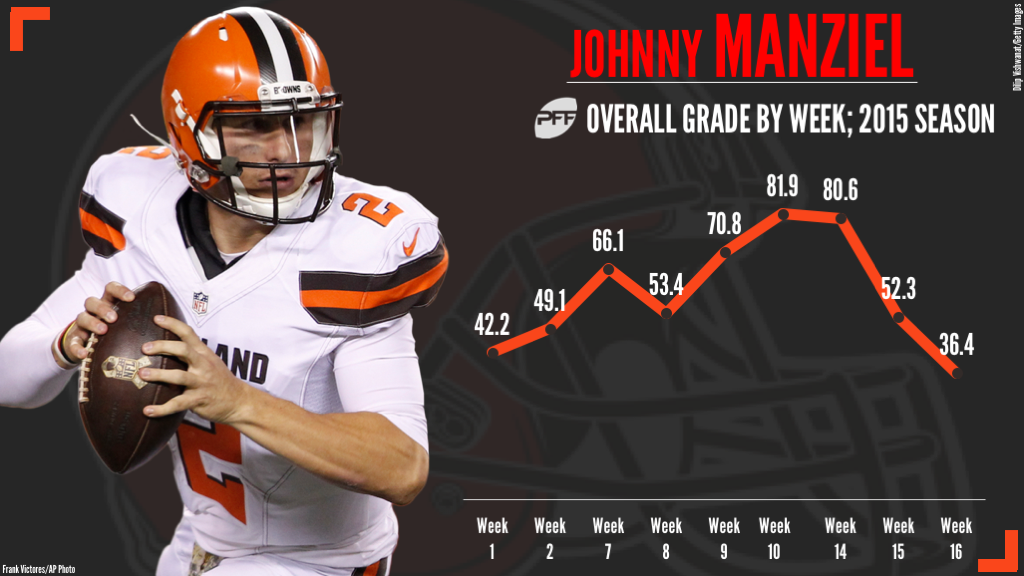 Manziel unquestionably has an NFL-caliber arm and given how his NFL career came to an end, it’s clear that we haven’t seen the best of what he can offer in terms of effort and preparation, so any on-field performance to date represents a floor rather than ceiling to his prospects.

That brings us to his debut performance at the Spring League, in which he completed 9-of-15 pass attempts for 83 yards and a touchdown. Those are the box score numbers, but what was Manziel’s performance actually like and what did it show any NFL scouts or personnel executives?

We actually graded Manziel’s performance and he ended up with an overall PFF grade of 44.1, but how that grade was comprised was interesting. There was a fumble in the pocket as he tried to sidestep pressure, coughing up the football and delivering a body blow to his overall grade. That continues a trend of poor ball security that may have been Manziel’s biggest flaw in the NFL with the Browns. During his time in Cleveland, he had four extremely bad fumble grades, instances that were both hidden bullets to his overall grade and put the ball at risk of turnovers. He had one in this game and another play in which his ball security was questionable but he was ruled down before it came out.

He also threw one disastrous pass late in the game while trying to pull out a victory that should have resulted in a game-ending interception.

He was under pressure on 45.4 percent of his dropbacks in the game, only two of which were clearly his fault, and his passer rating on those plays was 79.2. On third downs, he completed just one pass for 17 yards, took a sack, scrambled short of the markers and threw that previously mentioned disastrous pass.

Overall this was a pretty recognizable Manziel performance, one that looked like he hadn’t spent much time away from the game.

A selection of NFL teams are now gearing up to take potential quarterbacks of the future in the NFL draft in a few weeks. Some have added free agents to address the problem, but inevitably there will be teams entering August and September without a solid answer at the most important position in the game. Manziel was a spectacular draft bust, but he is a player with the talent to achieve something valuable at the NFL level, and the value to be a cheap gamble for a team in need of help.

He is certainly not the only available outside the box option for NFL teams, but his Spring League debut makes him arguably the most topical. Any team without a firm answer at quarterback that satisfies themselves that he has dragged his personal life back into line could be well served to bring Manziel into camp to see what they can realize of his potential, because the tape suggests the same player from the Browns is still there – good and bad.