How all 31 first-round picks have played this preseason

Two weeks of the 2016 NFL preseason are in the books, and most of this year's first-round draft picks have made their professional debuts. While injuries (and a contract dispute, in one circumstance) have kept some rookies sidelined, the first on-field performance for many of these players has given us a small glimpse into their transition from the college game.

While many—if not most—of these rookies will improve as the season progresses, it's certainly worthwhile to take a look at their performance to date.

Despite being the No. 1 overall pick, Jared Goff has looked far from ready to play come Week 1. Against Kansas City, he fumbled the ball twice and essentially sacked himself, tripping on his own lineman on his way out of the pocket. We've seen flashes of his arm talent, but he has a long way to go to produce a successful rookie campaign.

Key stat: Completed just 25 percent of his passes under pressure (3 of 12)

Carson Wentz played 38 snaps during the Eagles' first preseason game, completing 50 percent of his passes, but only one beyond 10 yards of the line of scrimmage before a hit to his ribs sidelined him and kept him out of any further preseason action to date.

In an era of very few holdouts, Joey Bosa’s contract dispute with the San Diego Chargers continues to rumble, and he has yet to step onto the field.

A hamstring injury has kept Ezekiel Elliott on the sideline through two preseason games.

Key stat: Average tackle depth against Tampa Bay was -0.3 yards behind the line of scrimmage

Ramsey saw his first preseason action this past week, playing sixteen snaps against the Buccaneers and showing the kind of monstrous run defense that saw him top PFF’s cornerback grades a year ago at Florida State. He notched two defensive stops in the game, including a tackle for a loss of 6 yards on the play.

So far in the preseason, Stanley has lived up to his billing, standing as the top-graded rookie tackle through two games, and has yet to surrender a single pressure in pass protection.

Key stat: Has yet to record a pressure on 10 pass-rushing snaps.

DeForest Buckner played 19 snaps in his first preseason action, lining up at left end with the 49ers' starters, but suffered a soft tissue injury—not believed to be serious—that has kept him out of action since.

Key stat: No sacks, one hit, and three hurries surrendered

After a poor first game against San Diego, Conklin followed up with a much stronger outing in his second preseason action against the Carolina Panthers, where he kept a clean-sheet in pass protection and flashed the crushing power he possesses in the run game, at one point driving Pro-Bowl DT Kawann Short well off the line at the point of attack.

Floyd has seen a few snaps at other positions, but has lined up at left outside linebacker in Chicago’s 3-4 defense on almost all of his snaps (56 of 66). However, he has yet to distinguish himself with his play, positively or negatively.

Key stat: Allowed three catches on four targets, but only for 17 total yards

Apple played 19 snaps in New York’s first preseason game against Miami, but suffered a lower-leg strain that has kept him out of action since.

Top NFL draft prospects at every position for 2017 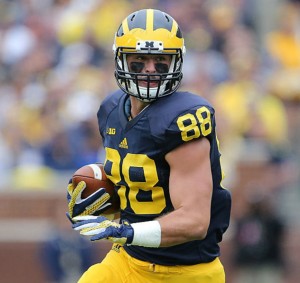 Steve Palazzolo names the five best players at every position, and breaks down their draft stock heading into the 2016 college season.

So far so good for Vernon Hargreaves III, who has seen two outings this preseason and performed well in both. He has been largely playing in the slot, and has the kind of quick-twitch movement skills and the ability to change direction that makes him perfect for that role.

Key stat: One hit, one hurry, and one defensive stop

Another player struck by injury, Sheldon Rankins played 22 snaps in his first preseason game before suffering a broken fibula in practice that will sideline him for six to eight weeks.

The long-term plan is for Tunsil to be the left tackle in Miami, but the short-term goal is to get him on the field at left guard. He began the preseason behind Dallas Thomas at that spot, but has since moved into the starting role. His first action was not good, but he was far better when surrounded by the starters against the Cowboys.

In his first preseason game, Joseph played just nine snaps with the starters, but in his second outing, they were out there longer, and he saw 21 snaps of action. The former Mountaineer has yet to make any big-impact plays, but he has been solid and looked comfortable, avoiding any major mistakes.

A hamstring injury has kept Corey Coleman out of both preseason games so far, but he has been lined up with the starters throughout camp.

Key stat: One sack surrendered, as well as one penalty

Starting both games for the Lions at left tackle, Taylor Decker has seen at least 20 snaps in both preseason games, and while he was beaten for an ugly sack in his first outing, he hasn’t given up any pressure since, though his run blocking took a turn for the worse in the second preseason game.

Key stat: Targeted just once as the primary defender in coverage (resulted in a touchdown)

Neal saw his first preseason action against Cleveland, having missed the first game against Washington, and didn’t have the best debut possible. He got pancaked in the run game and coughed up a touchdown on a double-move in coverage.

Key stat: Has not earned a negative grade for a play yet

Ryan Kelly has looked assured and capable from day one for the Colts, and has earned positive grades in both preseason games so far. In fact, he has yet to earn a negative grade on a single play in 40 snaps.

Shaq Lawson didn’t make it past May before being shut down by shoulder surgery, which will put him out of commission until at least Week 6 of the season.

Lee has played extensive snaps in both preseason games; so far, his grading profile matches his college marks, with a positive coverage grade but below-average run defense grade. He has a sack and hurry on seven pass-rushing snaps, but has also missed two tackles in each game.

Key stat: Average depth of target of 14.7 yards—4 yards higher than any other Houston wide receiver

In his first preseason action, Will Fuller wasn’t called upon much. He saw just one target—which he caught for 4 yards—but his workload ramped up in a big way in the second game. In the meeting with the Saints, he saw eight passes sent his way, catching four of them for 73 yards and a touchdown. He will start for the Texans, and they will be relying on him to take the top off opposing defenses.

Another victim of an early injury, Doctson has been sidelined with an Achilles injury since spring, and there is still no timetable for his return.

Key stat: Has receptions on just 44 percent of the targets thrown his way

The Vikings will be relying on Laquon Treadwell to make a major impact in his first year, but thus far, he has been kept to the second team behind Charles Johnson. Treadwell has caught four passes this preseason, but they all came in the opening game, and he caught none of the four thrown his way in the Vikings' second outing.

A torn pectoral muscle suffered in the first padded practice will limit Jackson’s rookie impact, and the team is still not sure if he will return for any of his first pro season.

A leg injury has kept Burns out of preseason action so far, but at camp he was running with the second-team defense before it occurred, and is now back at practice, so the former Hurricane should see his first live action soon.

Key stat: Completed 71.4 percent of his passes when kept clean in the pocket

The QB competition in Denver is wide open, but in reality, it’s a two-horse race between Trevor Siemian and Mark Sanchez to start on opening day. Paxton Lynch’s role is to get on the field and take over as soon as he can, because he is obviously the team’s future at the position. He has graded well through two games and made a couple of spectacular throws, but there are still clearly flaws to his game that need work.

Key stat: One hurry and one defensive stop

UCLA’s late graduation has seen Clark behind the eight-ball when it comes to his preseason, and he’s currently behind fellow rookie Dean Lowry at defensive end on the Packers' depth chart. Clark has outplayed Lowry so far through two preseason games, though, and will likely assume a starting spot before long.

Key stat: Has yet to be penalized

Currently behind Zane Beadles on the depth chart at left guard, Garnett has played 67 snaps across the two preseason games so far, but has done little to suggest he needs to be starting instead. He has only surrendered one pressure, but has been beaten another couple of times by pass rushers without those plays becoming a pressure because of circumstances outside of Garnett's control (for example, the ball getting out too soon, another lineman tidying up his block, etc.).

A high-ankle sprain has meant that Robert Nkemdiche did not even practice in camp with the team until this past Monday, so he has yet to see the field.

Key stat: Has made two tackles, but missed one.

Given how strong the Panthers are inside, it’s not a huge shock to see Vernon Butler running with the second team so far. In 4o snaps, Butler has been underwhelming, though he was facing first-team players for much of that time, as the Titans left their starters in far longer than the Panthers.

Key stat: Surrendered a penalty and hurry in his first game, but was perfect in pass protection in his second

Germain Ifedi has been lining up as the team’s starting right guard, and while he had a tough time in pass protection against the Chiefs in his first outing, he was far more solid against the Vikings the next week, surrendering no pressure at all that game over his 29 snaps.