Grading all 32 first rounders after Week 9

Week 9 of the NFL regular season schedule has been completed, giving us an even larger sample size to delve into just how each of the 2018 NFL Draft first-round picks has fared in their respective action so far. Some of the 32 first-rounders have not qualified for a grade either based on small snap counts or not playing altogether. On the other hand, some players have jumped out of the screen and have helped strengthen their teams.

Here is how each of the 32 first-round rookies from the 2018 NFL Draft has graded in their first nine weeks: 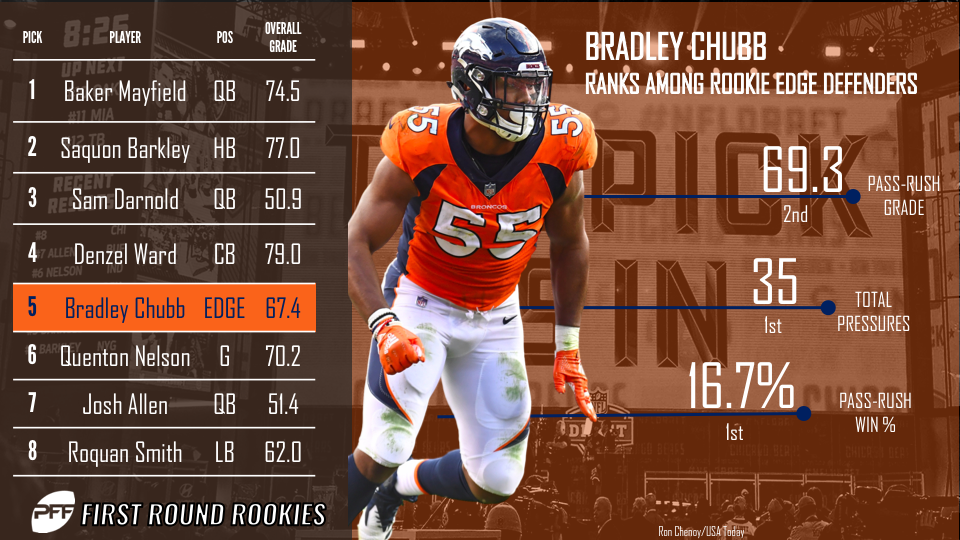 After grading north of 80.0 in his first three appearances, the No. 1 overall pick has hit some rocky waters as of late. From Weeks 6-9, he’s surpassed the 70.0-grade threshold just once, and he’s coming off his two worst games as a pro so far. Week 9 against the Chiefs, Mayfield, as usual, performed well from a clean pocket, completing 24-of-33 attempts for 270 yards and two touchdowns for a passer rating of 117.0 – 11th-best this week. However, Mayfield's downfall came when he faced pressure, as he completed 5-of-9 attempts for 27 yards and an interception, good for a passer rating of just 21.3.

Barkley too was bottled up by the opposing defense and ended his Week 8 game with the lowest single-game grade of his career. Against a stout Washington defense, Barkley was held to just 38 yards on 13 carries, with only 15 of those yards coming after contact. He forced just one missed tackle on the day and averaged just 1.15 yards after contact per attempt, his lowest single-game marks of the season.

Denzel Ward only managed eight snaps in the Browns' Week 9 game before leaving the game with an injury. However, for the most part, Ward has shone in his previous eight games and has allowed a passer rating of just 73.3 on throws into his primary coverage, which ranks 21st among cornerback this year, and he's done that despite being on pace to be the most targeted rookie cornerback in PFF history.

Once again, the Broncos' first-round pick was productive in the pass-rush in his team's Week 9 loss to the Texans, and he racked up three total quarterback pressures on his 19 pass-rush snaps. Through nine weeks of the 2018 season, Chubb has accumulated 35 quarterback pressures, which is the most among rookie edge defenders and tied for the eighth-most among all players at the position.