Grading all 32 first rounders after Week 2

The second full week of the NFL regular season schedule has been completed, giving us a larger sample size to delve into just how each of the 2018 NFL Draft first-round picks has fared in their respective action so far. Some of the 32 first-rounders have not qualified for a grade either based on small snap counts or not playing altogether. On the other hand, some players have jumped out of the screen and helped better the units of their respective teams.

Through Week 2 of the 2018 season, here are how each of the 32 first-round rookies from the 2018 NFL Draft has graded in their first two weeks: 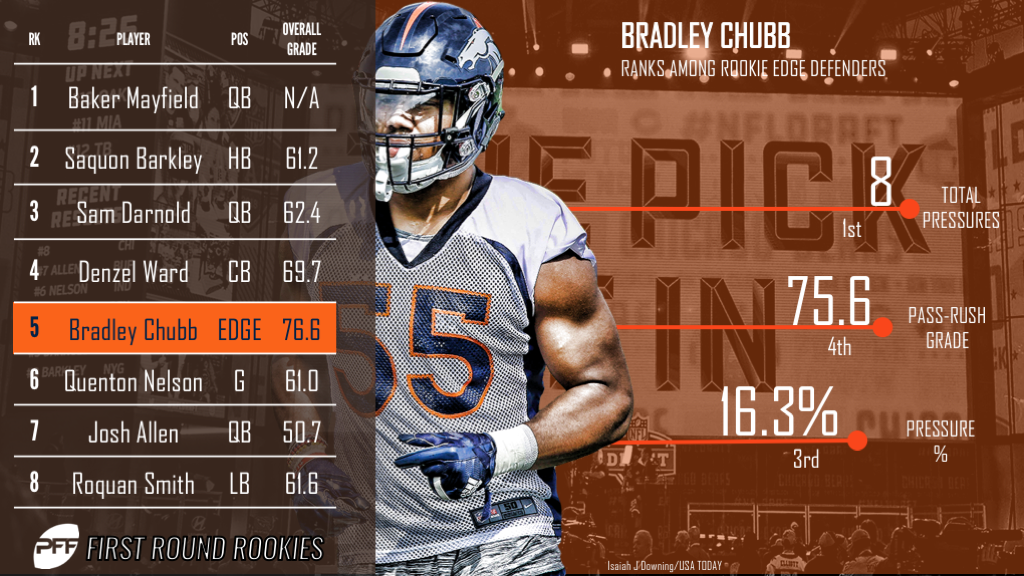 The Browns told us that quarterback Tyrod Taylor would start the season, and so far, they've stuck to their word. Our highest-ranked preseason signal-caller will remain on the bench until Taylor forces the Browns to make a change.

The Giants seem determined to make Barkley the focal point of their offense, and through two weeks, the former Penn State star has racked up 45 offensive touches – which is more than any other player on his team. Barkley has been as good as advertised so far and has averaged a very healthy 4.38 yards after contact per rushing attempt, which is good for third among running backs.

Darnold followed up a decent debut with a relatively poor Week 2 performance. In his second regular-season game as a pro, Darnold posted an adjusted completion of just 70.0 percent, which ranked 24th among players at the position and he also threw two turnover-worthy passes, which has put his total up to three through the first two weeks.

After a superb Week 1 outing, Ward came back down to earth somewhat against the New Orleans Saints, allowing seven receptions from seven targets for 71 yards and one touchdown. Through two games, Ward is still our second-highest graded cornerback in terms of coverage, but his overall defensive grade is being dragged down by his poor tackling, as he's missed four tackles on just 15 attempts.

Through two games, Chubb has played 102 of his team's 122 defensive snaps and has produced eight total quarterback pressures from his 49 snaps as a pass-rusher. As productive as he's been as a pass-rusher, Chubb's best work has come against the run, where he's already tallied four defensive stops – the most among rookie edge defenders.