Grading all 32 first rounders after Week 13

Week 13 of the NFL regular season schedule has been completed, giving us an even larger sample size to delve into just how each of the 2018 NFL Draft first-round picks has fared in their respective action so far. Some of the 32 first-rounders have not qualified for a grade either based on small snap counts or not playing altogether. On the other hand, some players have jumped out of the screen and have helped strengthen their teams.

Here is how each of the 32 first-round rookies from the 2018 NFL Draft has graded in their first 13 weeks: 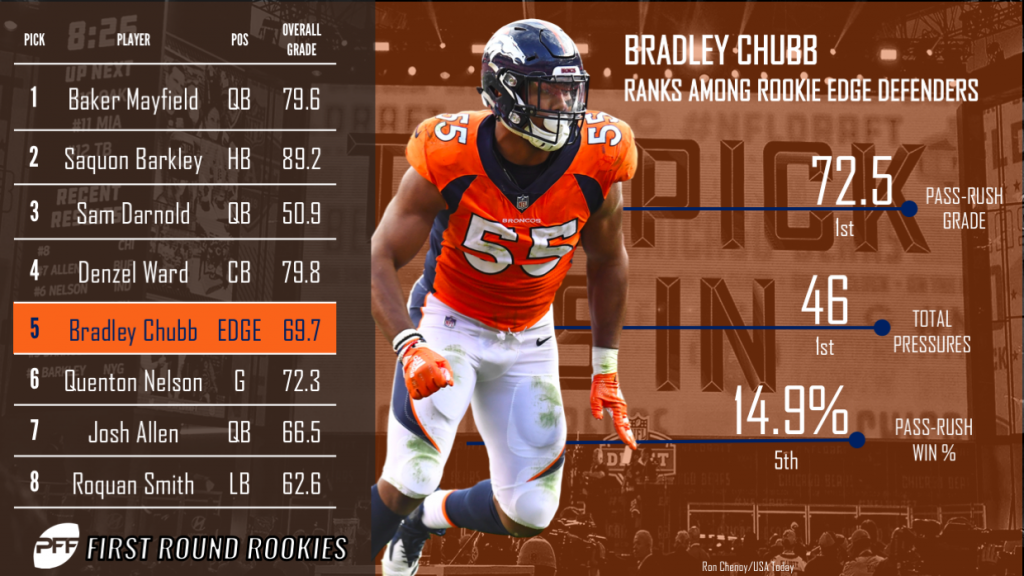 Mayfield struggled in the first half of his Week 13 game, as he threw three turnover-worthy passes, all of which resulted in interceptions. However, he rebounded in the second half, completing 24-of-30 second-half attempts for 351 yards, a touchdown, three big-time throws and most importantly, no turnover-worthy passes. While his first-half showing no will no doubt be a disappointment, fans can take solace in a second-half performance where he fielded a perfect passer rating on his eight attempts under pressure – the best mark among quarterbacks this week.

Barkley has been spectacular over last three weeks, so much so, that he ranks first among all running backs in that span with an elite overall grade of 90.1. In Week 13, Barkley surpassed 100 rushing yards for the third straight week, with 64 of his 125 yards coming after contact. Putting the cherry on top of another tremendous display, he also forced four missed tackles and took four of his carries for 10 or more yards.

As Darnold's Week 6 game showed, the former USC signal-caller is more than capable of delivering exceptional performances under center, but unfortunately for Darnold, the bad performances are vastly outweighing the good ones right now. Darnold had his lowest-graded game to date against the Dolphins in Week 9, completing just 21-of-39 attempts for 229 yards, four interceptions and he threw an incredible six turnover-worthy passes on the afternoon.

Ward's play has been nothing short of inspired this year, and it seemed like Deshaun Watson had taken notice to that prior to the game. After seeing a whopping 16 total targets over his previous two games, Ward was targeted just once in his Week 13 clash and allowed just two yards on the catch. Through 13 weeks, Ward has allowed a passer rating of just 70.0 on throws into his primary coverage – the 11th-best mark among all players at the position.

Chubb was a force to be reckoned with in his team's Week 13 game, and his partnership with Von Miller was ultimately too much for the Bengals to handle. The rookie edge defender produced the best pass-rushing performance of his career and racked up a strip sack, two hits and two hurries from his 33 pass-rushing snaps, en route to an elite pass-rush grade of 90.0 – the best mark of his career to date.