The Cincinnati Bengals were defeated Sunday afternoon by the Pittsburgh Steelers on account of a last-second score by Antonio Brown. While the loss hurt the Bengals in terms of division standings, another wide receiver with roots in Pittsburgh gave the organization and its fan base a reason for hope. Third-year receiver Tyler Boyd shone, posting a stat line of seven catches for 62 yards and two touchdowns and continuing his ascension toward becoming one of the deadliest receiving options in the league.

After parting ways with both Marvin Jones and Mohamed Sanu in the same offseason, the Bengals organization sought to fill a gaping hole at the receiver position. They selected Boyd out of the University of Pittsburgh in the second round with high hopes that he would be able to fill the void vacated by Jones and Sanu. As a rookie, Boyd was touted as a crisp route-runner who could pick apart defenses with his precise footwork but lacked big-play ability. While at Pittsburgh, he broke Larry Fitzgerald’s freshman records for catches, yards and 100-yard games. In his last season at Pitt, Boyd finished the season as our ninth-highest graded draft-eligible wide receiver.

Boyd’s rookie season was a mild success that saw him accumulate 603 yards on 54 catches and one touchdown, but he also dropped three passes, was faulted with three of Andy Dalton’s interceptions and lost a fumble. His grade of just 65.1 ranked 66th out of 89 receivers who saw at least 50 targets in 2016. The following season, Boyd took a step backward and played in just 10 games, starting only one of them and being a healthy scratch for another as he battled some off-the-field issues. In his 10 games, Boyd racked up just 225 yards on 22 receptions for two touchdowns to go along with an overall grade of 62.0, which was tied for 77th among 110 qualifying receivers. 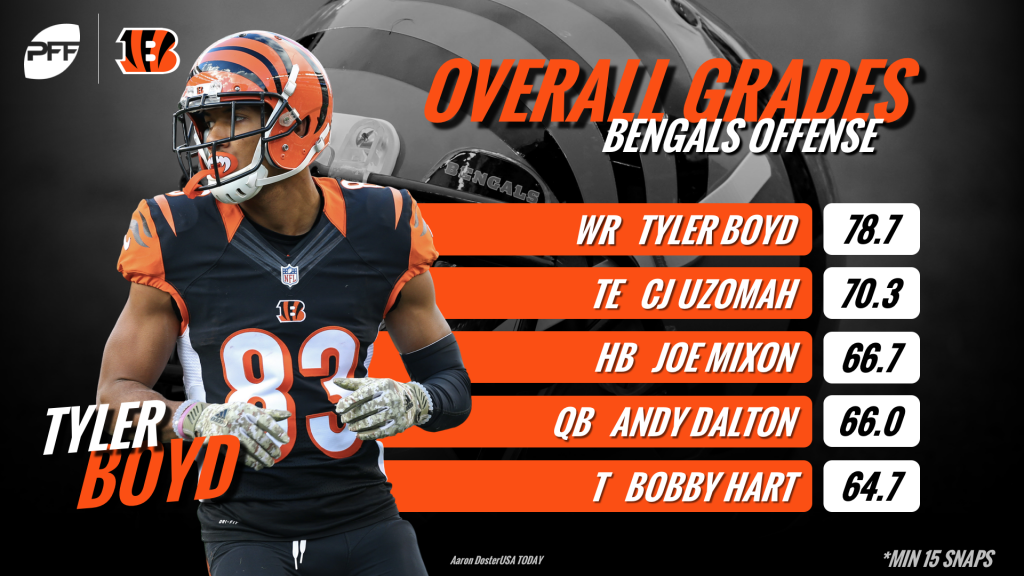 When considering Boyd’s slow start in his first season and apparent regression in his second, his breakout this season becomes all-the-more impressive. To say that Boyd has been a driving force for the Bengals’ offense this year would be an understatement. The third-year receiver currently sits as the highest-graded Bengal on offense, and his overall grade of 83.7 ranks 9th among wide receivers with more than 30 targets this season. He has snagged all 37 of his catchable targets without a single drop and forced as many missed tackles (3) in six weeks as he did his first two seasons. Dalton has also generated a passer rating of 135.4 when targeting Boyd, which ranks third among receivers with 30-plus targets. Add that to the fact that Boyd has averaged 1.80 yards per route run from the slot, which is good for seventh-best among qualifying slot receivers, and it becomes that much easier to see Boyd is giving the Bengals another high-quality option who is making efficient use of his routes opposite A.J. Green.

Boyd hasn’t just emerged as a complementary option to Green, though, as he has established himself as a legitimate weapon on the office — one that Dalton trusts. The former Pittsburgh Panther has seen (and caught) 21 targets on money downs (3rd & 4th down), which is tied for the second-most in the league. Of his 21 money-down targets, 57.1% have gone for first downs, which ties Green for seventh among qualifying wide receivers. One could argue that Dalton is trusting Boyd as much as Green on crucial downs this season, and Boyd has been making the most of his opportunities, as evidenced by his two clutch fourth-down catches to keep the game-winning drive alive in Atlanta. He has demonstrated an ability to consistently move the sticks (his 24 first-down catches is T-eighth among all receivers), and his improved comfortability with Dalton and the offense has translated to him catching more touchdowns in six weeks than he did in his first two seasons.

Boyd is on pace to shatter all of his career highs due in part to extra attention on Green and an increased workload with Tyler Eifert finding himself sidelined again, but one would be remiss to say Boyd hasn’t made tremendous strides in his own right. In his third year, the Bengals wide receiver has really come into his own and made the most of his opportunity, pushing the Bengals' offense toward the top units in the NFL and himself into the conversation for one of the top-10 receiving options in the league.