As decisions loom, Gronk looks to put another stamp on a remarkable career

Super Bowl LIII is offering up plenty of storylines in the lead-up to the season’s biggest event, such as Tom Brady’s ninth Super Bowl appearance and Sean McVay making history as the youngest head coach ever to make the big game. However, as Rob Gronkowski is rumored to be debating his NFL future this offseason, a major narrative is to be determined, as the game could be in jeopardy of losing the greatest tight end to ever to step on the gridiron. 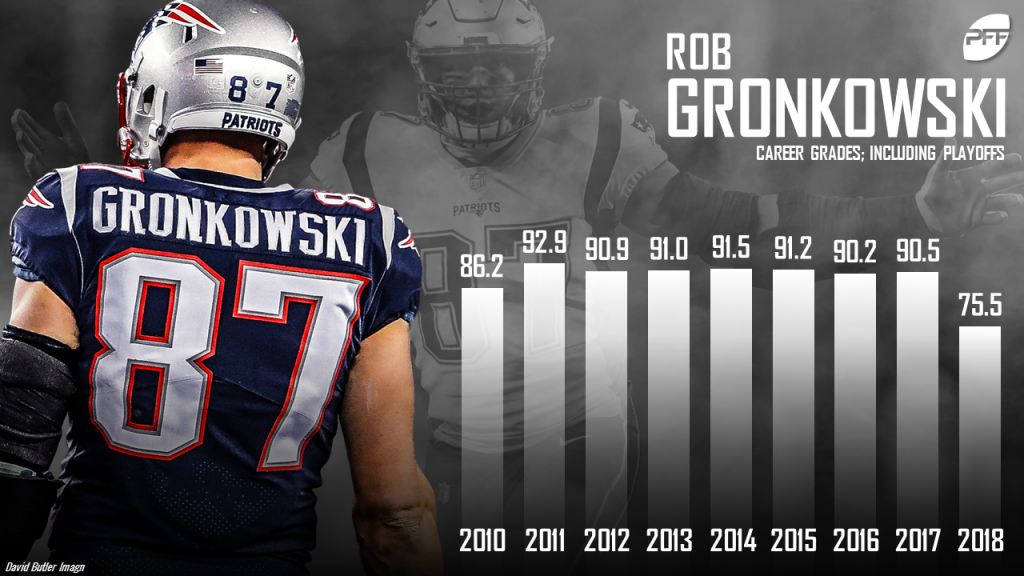 It’s a simple fact that Gronk has dominated when he’s been on the field throughout his career, both as a pass-catcher and a blocker. He’s the only player ever at the position to record seven-straight overall season grades of over 90.0 (2011-2017) in the PFF era. In his nine-year career, Gronkowski has generated a 125.8 passer rating when targeted and has only dropped 42 balls on 880 total targets. His overall grade of 92.9 in 2011 continues to set the standard as the highest grade ever given to a tight end over the course of a full season.

As he’s battled back from a host of injuries, 2018 has been somewhat of a down year by his standards. His 75.5 overall grade, including the postseason, is the worst of his career, but it still ranks inside the top-ten at the position. His 1.73 yards per route run average also lists in the top ten at eighth overall.

En route to the Super Bowl, he delivered a vintage performance in the AFC Championship game in Kansas City. Against the Chiefs, Gronkowski was targeted a game-high 10 times, leading to six receptions for 79 yards. He looked closer to the physical force of previous years than he has for much of this season. He won at the catch point with a contested catch down the sideline, he forced a missed tackle after the catch on a different reception, and he moved the chains in crucial situations. All of that led to his third-highest overall grade of the season at 76.6. 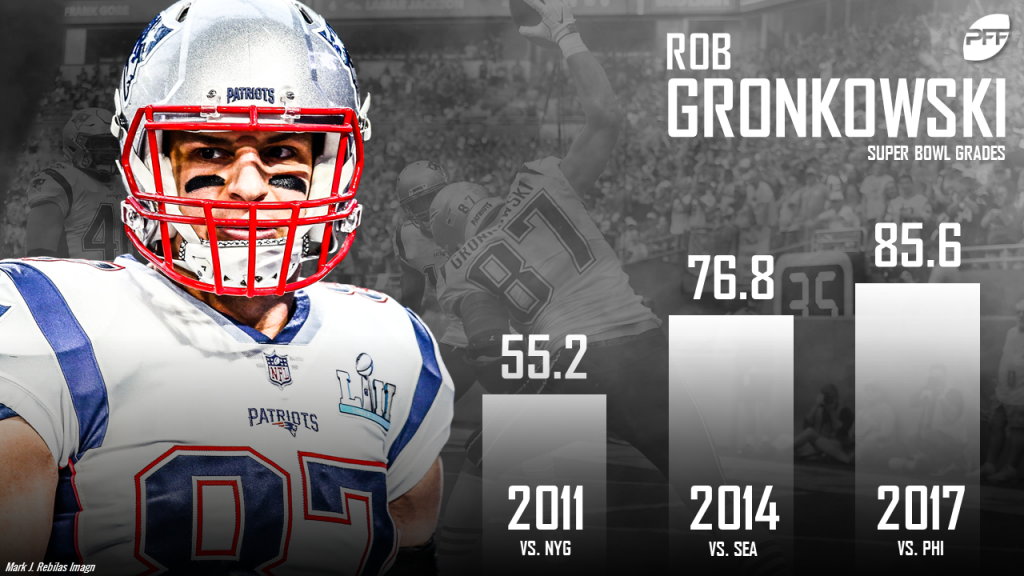 Over his career, Gronk has appeared in three Super Bowls with his most recent against the Eagles being his best from a PFF grade standpoint. He generated a team-high overall grade of 85.6 and an 87.5 receiving grade with nine receptions on 15 targets for 116 yards and two scores. Expect Gronk to make an impact early and often on Sunday versus a Los Angeles Rams’ defense that has been vulnerable against tight ends this season. The Rams allowed the third-most receiving yards (1,075) when opposing teams targeted tight ends in the regular season.

Super Bowl LIII is another chance for us to enjoy the greatness that Gronkowski brings to the field. However, as the grind continues and as the hits continue to add up, there is a chance this may be the last time we see him walk out of the tunnel in a New England Patriots uniform. As he looks to potentially go out on top, adding another Super Bowl ring will further supplant him as the game’s greatest ever at the tight end position.