An introduction to PFF QB Charting

The next level of quarterback analysis is upon us. While the PFF grading system currently adds necessary context to quarterback performance, we're adding a new layer of detail that can further separate quarterbacks on a throw-for-throw basis.

With that, we've started tracking actual ball location for every NFL quarterback and select NFL draft-eligible quarterbacks. Did the QB put the slant route on the front number for optimum yards-after-the-catch opportunity? Did he hit him with an accurate pass on his frame? Did he leave it in a catchable spot, but in a less-than-desireable YAC location? We will answer all of these questions and more with PFF's advanced quarterback analysis.

In addition to ball location, the specific throw type, primary coverage type and level of receiver separation will be added to the mix in order to add even more context to each throw. The last piece we've added is a description of the quarterback's “look” on each play, noting the side of the field where he started his read and whether or not he worked beyond his first look. Those six pieces of data have already proven extremely valuable in our trial runs and there's even more to come down the road as we continue to optimize our quarterback evaluations.

Here are some of the specifics for each category:

[Editor's note: All of this information can be found in the updated version of our QB Annual, available for both PFF Edge and Elite subscribers. Not a member? Sign up now for this and so much more.] 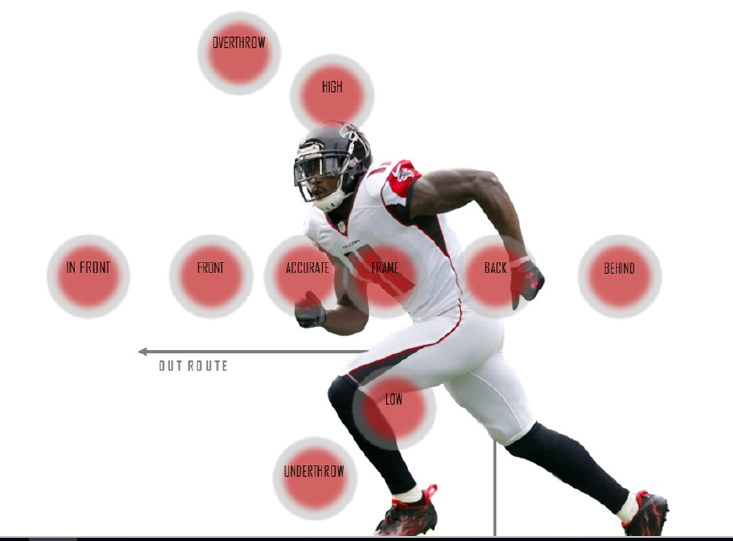 Throw location matters. It may sound intuitive after years of hearing how important it is to hit the slant on a receiver’s front number, but we now have the stats to back it up. Perfect ball location on “expected” throws leads to higher yards after the catch than all other throws. A step below “perfect” is a pass on the receiver’s “frame” which still represents good ball location, it’s just not the most optimal spot. We’ve also seen that passes that are catchable, but in suboptimal location – high, low, front, back – are valuable, but not nearly as valuable as “accurate” passes and yards after the catch take a hit when the receiver has to make an adjustment. We are also careful to add proper context to passes that appear to be off-target but are thrown away from the leverage of the defense. Such passes get an “away from coverage” designation that falls into the proper bucket of accurate passes.

We can then put each pass into accuracy buckets as follows:

Using these three categories puts the 2017 NFL average for accuracy at 56.8 percent and average for “perfect” passes at 16.0 percent.

These passes are all somewhat on the receiver’s frame and in a “catchable” range, but they’re “inaccurate” in at least one of four directions.

The uncatchable bucket includes a number of other categories, including plays made by the defender, but the basic concept is the quarterback is throwing a pass that is uncatchable either due to accuracy or a lack of velocity.

In order to properly give credit and blame where it is due, there are a number of other categories that are charted when a clear accuracy cannot be assigned. From the route being cut off to various types of miscommunications, these results all fall into the “other” category. 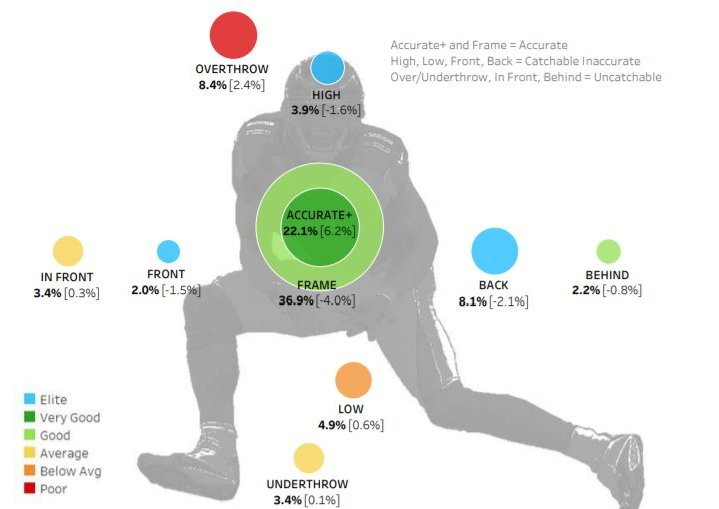 We’ve identified the different style throws a quarterback will make from stick (on a line, receiver facing quarterback), to a lead across the field horizontally, to a lead vertically up the field, to over the shoulder throws and much more.

Keeping this one as objective as possible, we’ve identified the side of the field the quarterback is looking at the top of his drop and whether or not there is one or more receivers to that side. We’ve also identified the plays in which no “read” is made by the quarterback (screen passes, for instance) and labeled them as “scheme.”

If the quarterback throws the ball to the side of his first look, it goes down as a “1,” while coming off that side to a read later in the progression warrants a “2.” We’ll also identify check downs and passes thrown on scramble drills.

While the PFF evaluation does a fine job of properly crediting the quarterback’s role on each play, this new system of play-by-play charting will only enhance those results. Quantifying “real” accuracy on various throw types against different coverages and varying level of separation by the receiver will add a never-before-seen layer of context to each quarterback’s skillset. Every team would love to have a quarterback who puts up a good completion percentage, high yards per attempt and gaudy passer rating, and while those are all great goals for a passing offense, this next-level quarterback charting allows us to further quantify how to best achieve those results and just how much the quarterback, receiver and defense affect those results.