The Mountain West isn’t stacked with superstars like that of a Power 5 conference, but that’s not to say that there isn’t prominent NFL talent hailing from the group of teams. Alexander Mattison is a prime example of this. Last season, the former Boise State running back led all FBS backs with 314 rushing attempts, showcasing his durability across 13 games.

Mattison was not only one of the most talented players in the Mountain West, but he even made an argument for one of the most talented running backs in college football. He attained a first down or touchdown on an impressive 27.8% of his carries this past season which resulted in an 81.2 overall grade that ranked 29th among FBS backs with 300-plus offensive snaps. But the 2018 season wasn't the only season on his highlight tape. When analyzing the previous two seasons, Mattison ranked 19th overall grade (83.1) and 21st in forced missed tackles per attempt.

Despite Mattison’s remarkable production, The Boise State offensive line did him no favors, specifically regarding his yards before contact per attempt average. All told, 121 of his 314 (38.5%) attempts began with negative yards before contact — the fourth-most among all FBS backs.

In fact, Mattison now finds himself in a similar situation in Minnesota, as he gets set to run behind a subpar run-blocking offensive line.

Over the last three seasons, Vikings running backs have been contacted behind the line of scrimmage on 733 of 1,106 rushing attempts (66.3%). In that same timespan, Minnesota’s mark of 1.3 yards before contact ranks 28th in the NFL.

Though an unfortunate situation, Mattison’s abilities in these circumstances were some of the most prolific in college football. In 2018, 46 FBS running backs saw 80-plus rushing attempts that started with contact at or behind the line of scrimmage. Among those 46 backs, Mattison ranked eighth in rushing grade and sixth in missed tackles forced per attempt (0.29) — all despite the fact that he saw the fourth-most such attempts.

Minnesota attempted to fix their offensive line deficiency by drafting Garrett Bradbury in the first round of the draft. Bradbury earned an 84.0 run-blocking grade — second among the 2019 draft class — in his final year at NC State. He will likely replace Vikings’ Pat Elflein, who earned a 44.3 run-block grade across 296 run-blocking snaps a season ago. 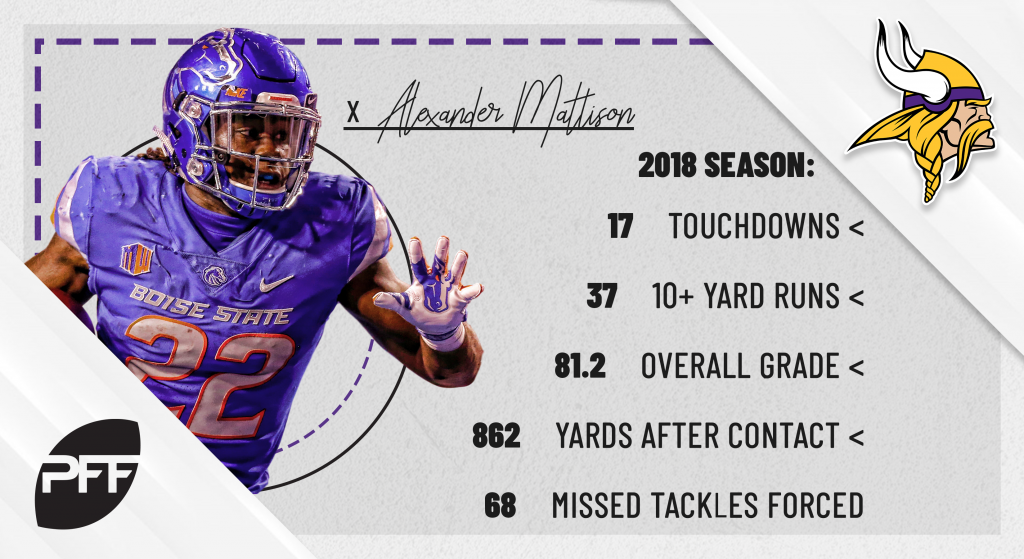 Mattison will likely assume the role of former Minnesota running back Latavius Murray, who saw 49 carries across the final seven weeks of the season behind Dalvin Cook’s 90 carries. Murray forced one missed tackle in that same period which ranked dead last among all offensive players with 25 carries. This metric obviously leads us to believe that Mattison will be much more efficient in the backup role considering his 0.22 forced missed tackle per attempt mark ranked 25th among all FBS backs in 2018.

It is worth noting that offensive-minded Gary Kubiak is now apart of the Vikings’ coaching staff. In 12 seasons as an offensive coordinator, Kubiak’s offenses have ranked top-five in rushing yards nine times. In his last year in the league, Kubiak led the league in outside-zone runs and outside-zone run percentage. Mattison earned a 78.5 when operating in the same run concept which ranked 17th among FBS backs last year.

PFF's fantasy projections, which are made available to all EDGE and ELITE subscribers as part of PFF’s fantasy suite, predict that Mattison will amass 311.6 rushing yards on 79.7 carries as well as secure 2.5 total touchdowns, but given his resounding potential, he could continue to trend upwards as the season approaches.