5 PFF stats you need to know from NFL Week 7

PITTSBURGH, PA - OCTOBER 23: Rob Gronkowski #87 celebrates his 36 yard touchdown reception with James White #28, Danny Amendola #80 and Chris Hogan #15 in the second half during the game at Heinz Field on October 23, 2016 in Pittsburgh, Pennsylvania. (Photo by Joe Sargent/Getty Images)

Week 7 of the NFL season brought with it plenty of surprises and standout performances (both good and bad). Check out the five PFF stats you need to know following Sunday’s games:

1. Tom Brady produced a perfect 158.3 passer rating when throwing to Rob Gronkowski in the Patriots’ win over the Steelers.

Gronk caught all four of the passes thrown his way, recording 93 yards and a touchdown. But that was just one component of his earning an 89.1 grade, best among New England offensive players, as he was also very effective as a run-blocker in this one. In Gronk and Martellus Bennett, the Patriots have two of the three highest-graded tight ends in the NFL this season (Carolina’s Greg Olsen is No. 1), with both players capable of making major impacts in the passing game and in the run game.

That’s five more than the next-best running back (New England’s LeGarrette Blount). His 4.45 yards after contact per rush also led the league, and he currently ranks No. 1 among all NFL backs with an overall grade of 84.1. 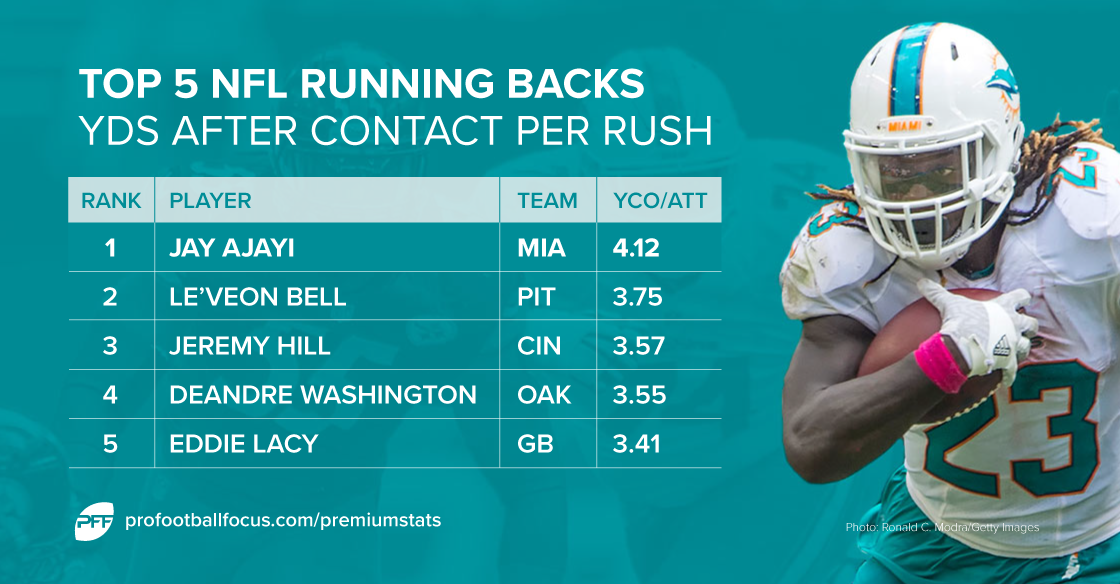 3. Chargers rookie Joey Bosa has earned a pass-rush grade of 86.0 so far this season—second-highest among NFL edge defenders.

That’s after playing just three games after his contract holdout and injuries delayed his NFL debut. Bosa has also recorded the highest pass-rush productivity score in the NFL among all defensive players with at least 50 pass-rushing snaps, notching 20 total QB pressures so far (four sacks, four hits, and 12 hurries).

4. QB Andrew Luck earned an overall grade of 85.8 in the Colts' win over the Titans—the second-highest grade in the league this week behind only Tom Brady (85.9).

That’s fitting, as Luck ranks second in the NFL behind only Brady in our season grades among QBs so far. Luck was excellent throwing the deep ball versus Tennessee, completing five-of-six attempts of 20 or more yards for 126 yards and a touchdown, and was close to perfect when throwing from a clean pocket.

That’s tied for second-most of any pass-rusher in the league this week (Cliff Avril recorded 10 QB pressures in Seattle's tie with Arizona). Graham has earned the second-highest pass-rush grade in the NFL this season among edge defenders, and was one of three Eagles' defensive players to earn an overall grade of 86.0 or better in shutting down the previously undefeated Vikings (safety Malcolm Jenkins and linebacker Jordan Hicks were the other two). Rookie QB Carson Wentz struggled to an overall grade of just 38.6, but the defense was able to lead Philadelphia to a win.