• Browns stars shining bright: The Browns have two of the top players in the NFL in terms of PFF WAR — offensive guards Joel Bitonio and Wyatt Teller.

Last week, the trades that sent WR Robbie Anderson to the Arizona Cardinals and RB Christian McCaffrey to the San Francisco 49ers dominated the NFL news cycle. While it’s too early to say if these moves will make a significant impact, we’ll keep an eye on them, just as we will for the other trades that have been rumored ahead of the Nov. 1 deadline.

After Week 8's debacle in Washington, the Green Bay Packers have now lost three straight, having fallen to the New York Giants and New York Jets beforehand. The Giants and Jets have a combined record of 11-3, but last season they had a combined record of 8-26. The Giants are now 6-1, with all six wins coming down to one possession. Meanwhile, the Seattle Seahawks are in first place in the NFC West but face the Giants in Week 8.

The Carolina Panthers were the only NFC South team to win this week and could rise to first place in the division if they beat the Atlanta Falcons and the Tampa Buccaneers lose to the Baltimore Ravens in Week 8.

The Seahawks lead the NFC West after their 37-23 win over the Los Angeles Chargers and deserved to move up in our rankings. Pete Carroll's squad excelled in all three phases of the game, capitalized on the Chargers' mistakes and prevented a comeback.

Although QB Geno Smith did not have his best game, he still completed 20 of his 27 passes for 210 yards and two touchdowns and is now the fourth-highest-graded quarterback in the NFL.

Running back Kenneth Walker III continues to live up to Offensive Rookie of the Year aspirations after racking up 168 rushing yards and two touchdowns for a season-high 82.4 game grade.

The Buccaneers have now dropped two games in a row and tumble down our rankings.

After trading away star running back Christian McCaffrey, many assumed the Panthers had started to tank. They were 13.5-point underdogs in Week 7, but they limited the Buccaneers to 46 rushing yards and outplayed them on offense en route to a convincing 21-3 win.

Through seven weeks, the Buccaneers have the league's lowest-graded rushing offense (58.8). On top of that, their defense finished 24th among 28 teams in team defense grade in Week 7.

Tom Brady has never finished the first eight games of a season with a sub-.500 record. We’ll see if this record stands after a tough Week 8 matchup against the Ravens.

A blow for the Jets: The New York Jets lost arguably their two best players on offense in RB Breece Hall (0.05 WAR) and G Alijah Vera Tucker (0.077 WAR) for the rest of the season.

A versatile player capable of playing every position on the offensive line, Vera Tucker had generated more WAR than Hall. The Jets just traded for running back James Robinson, so look to see if they bring in an offensive lineman to fill in for another injury on the line.

The Saints are hurting: The New Orleans Saints have the most WAR lost to injury this season, as it feels like they have an entirely different team out there each week. To highlight this, receivers Michael Thomas and Jarvis Landry and CB Marshon Lattimore (who each have WAR values above 0.045) have all missed time.

The tale of two cornerbacks: The Los Angeles Chargers also lost cornerback J.C. Jackson (-0.051 WAR) for the rest of the season, while the Atlanta Falcons consider star corner A.J. Terrell (0.055 WAR) to be week-to-week with a hamstring injury.

Jackson has underperformed heavily and has a negative WAR value, so it might not be the worst thing that he won’t take another snap this season. On the other end of the spectrum, Terrell is the star of the Atlanta defense, and the Bengals tore apart a Falcons’ secondary without Terrell and Casey Hayward Jr. this past week.

Chiefs on the rise: Following a very impressive road victory against the 49ers, the Kansas City Chiefs are one of the biggest jumpers in our PFF Elo rankings. While their ranking stays the same, their number improves after beating a top-10 team pretty convincingly — and it goes to show that you can never count out Andy Reid and the Chiefs.

Seahawks just getting started? The Seahawks also took a big jump. The 14-point road win over the Los Angeles Chargers was imposing, and now they’re favored by 3 points at home against the 5-1 Giants.

A miserable showing in Tampa Bay: One team that saw a big decrease in Elo rating? The Tampa Bay Buccaneers. Losing to the 32nd-ranked team by our ratings will do that, but losing by 18 is even worse. Scoring three points with Mike Evans, Chris Godwin and Russell Gage all active warrants serious questions about this offense. 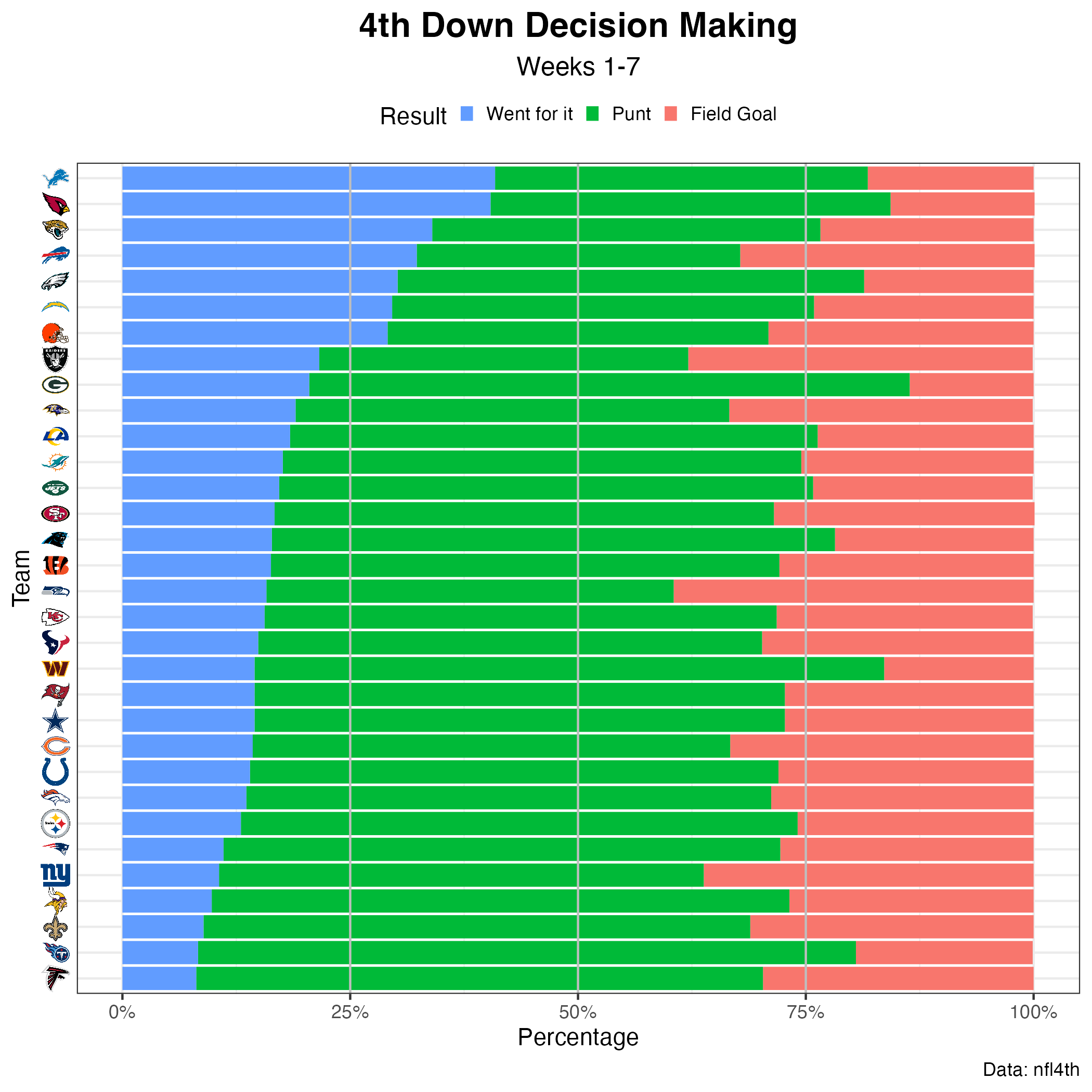 Better lucky than good? The Panthers have rarely gone for it on fourth down this season and converted just one of their three fourth-down attempts against the Bucs this week — due to a penalty on the play.

The Panthers recorded their best team offensive grade (84.4) and EPA per play (0.094) of their season on Sunday, but was this due to a coaching change, or did they take advantage of the Buccaneers' struggling defense? Their defense and special teams have not improved since Matt Rhule’s firing, which is evident in their PFF grades. 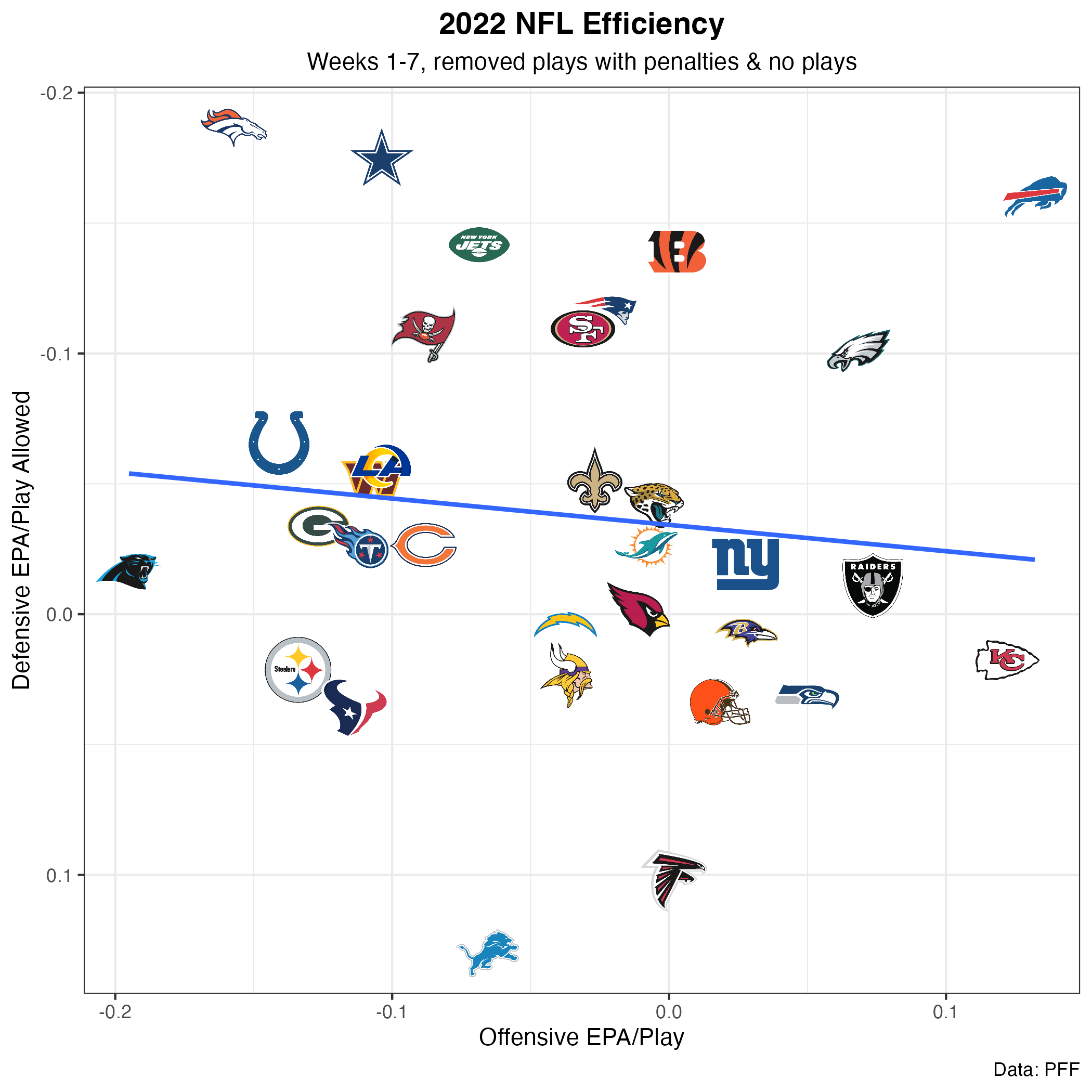 In a class of their own: In a season full of surprising teams and precipitous declines, it is worth highlighting just how dominant the Chiefs and Bills have been from an offensive efficiency standpoint. The two are alone as the best offenses in the NFL (by far).

Reality setting in: Some teams' early season starts are now looking more like noise than signal. While the Detroit Lions got off to a roaring offensive start, they are now a below-average offense only a few weeks later. The Bengals started slow but are now trending toward being more like the explosive offense of last year.

A look at the defense: On the defensive side, the 49ers fell drastically from their spot at No. 1, but then again, what defense doesn’t struggle against Patrick Mahomes? The Broncos now own the top spot, which surely leaves Broncos fans wondering what would be happening had QB Russell Wilson played up to his previous standard.

The dominant Dallas Cowboys defense of last year is proving to be no fluke, even without cornerback Trevon Diggs generating an interception seemingly every week. Dallas' dominant pass rush is generating pressure at the second-best rate in the league (39.7%) and is again leading the charge. 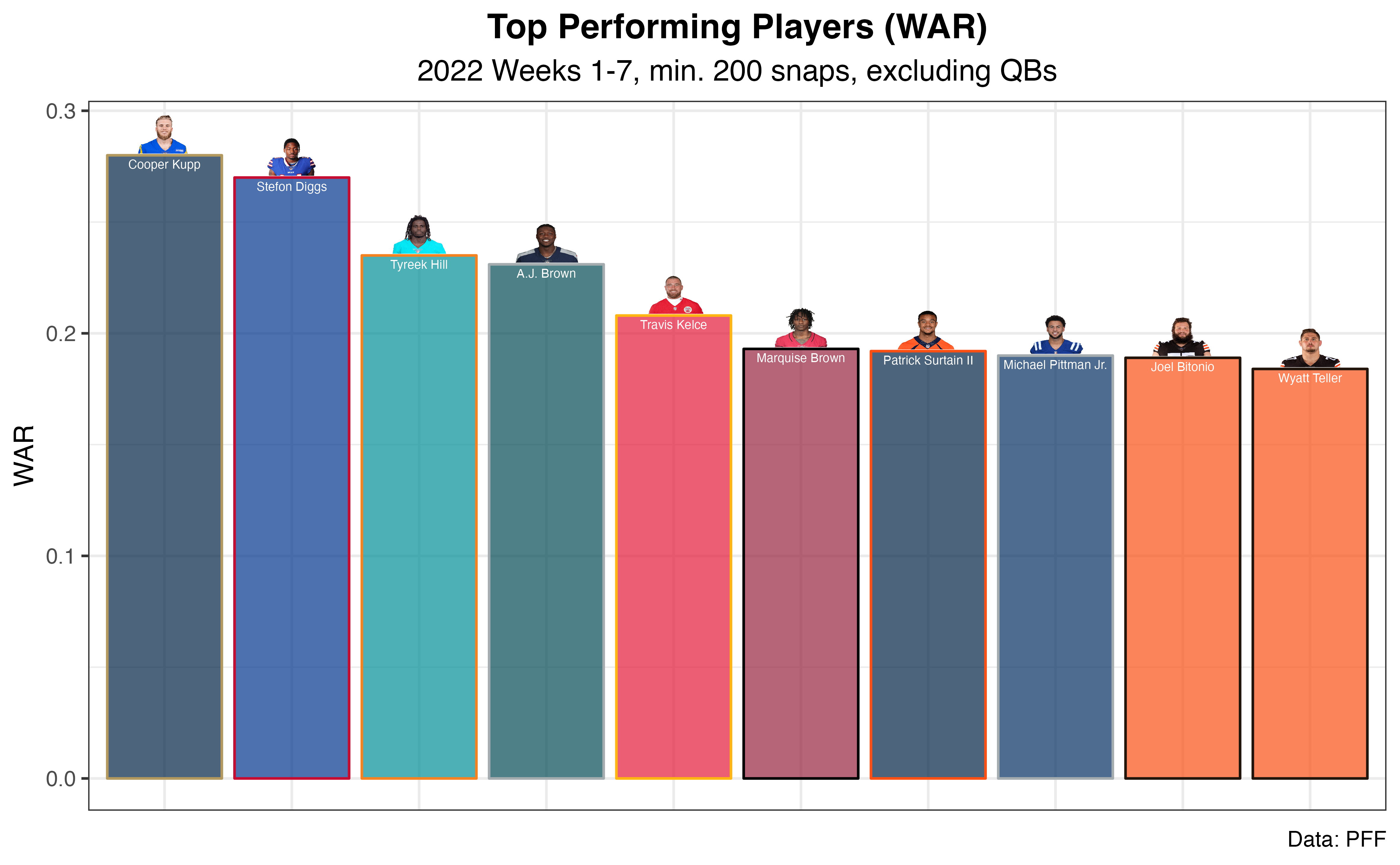 The Browns have two of the top players in the NFL in terms of PFF WAR — offensive guards Joel Bitonio and Wyatt Teller.

Bitonio earned the second-highest single-game grade (93.1) of his career in Week 5 against the Chargers. He allowed only one hurry and was beaten just twice all game in pass protection for a 90.0 grade this week.

After removing penalties and no plays, the Browns have the highest pass-block grade (77.9) among all teams in the NFL this year.

Unsurprisingly, Cooper Kupp, Stefon Diggs and Tyreek Hill are at the top of the league in terms of WAR. They also have the three highest PFF grades for wide receivers this year. Hill has the highest adjusted target percentage (39.4%) by a good margin — the Chiefs miss his presence.