On Sunday Night Football, the Indianapolis Colts shocked the Kansas City Chiefs, and a lot of NFL experts by winning on the road as a 10.5-point underdog (our predictive model gave them an above 80% chance of winning) mainly because they held the best offense of the league to only one touchdown and two field goals for a total of 13 points. Since then, it has been well documented that the Colts surprised the Chiefs with a man-heavy defensive game plan: In 49 passing snaps, the Chiefs faced a Cover 1 defense 34 of the times, and they played against a 2 Man look three other times. Thus, the Colts played man coverage 75.5% of the time, a clear tendency breaker: In the first four weeks of the season, they played Cover 0, Cover 1 or 2 Man less than 20% of the time.

The Chiefs apparently weren’t prepared for the Colts’ gameplan, as they had very little success against man coverage: On 37 dropbacks, Patrick Mahomes was sacked four times and completed only 12-of-32 passes (37.5%) for 186 yards. These dropbacks generated -0.20 EPA per play, and Mahomes earned a 70.2 passing grade. When the Colts played zone coverage, Mahomes was highly successful with a 90.6 passing grade, completing 9-of-10 passes and generating 0.49 EPA per play.

Matt Eberflus, Indianapolis’ defensive coordinator, deserves a lot of credit for winning the chess match against Andy Reid, realizing that the Chiefs' receiving corps might not be prepared to beat man coverage with Tyreek Hill still sidelined with a shoulder injury and Sammy Watkins leaving the game during the first drive. Believe it or not, Sunday was the first regular season game since Mahomes took over as the starter in which the Chiefs were held below the league average of roughly 0.06 EPA per pass play. Every other offense had at least six such games in the same stretch. This poses a natural question: When it comes to stopping the Chiefs’ passing game, has Eberflus found a blueprint that other teams can copy?

To get a first idea, we take a look at Mahomes’ 24 career starts and compare his performance against man and zone coverage in rolling three-game averages. 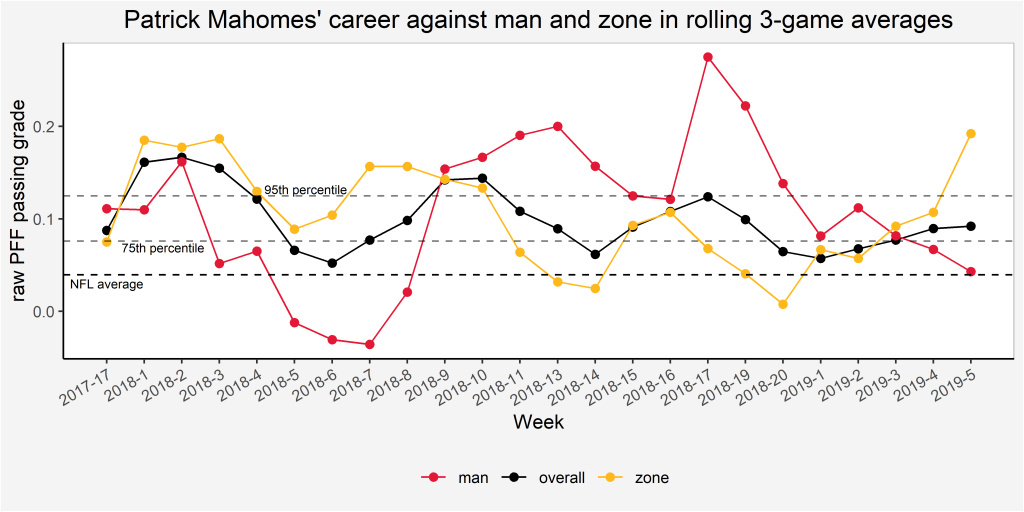 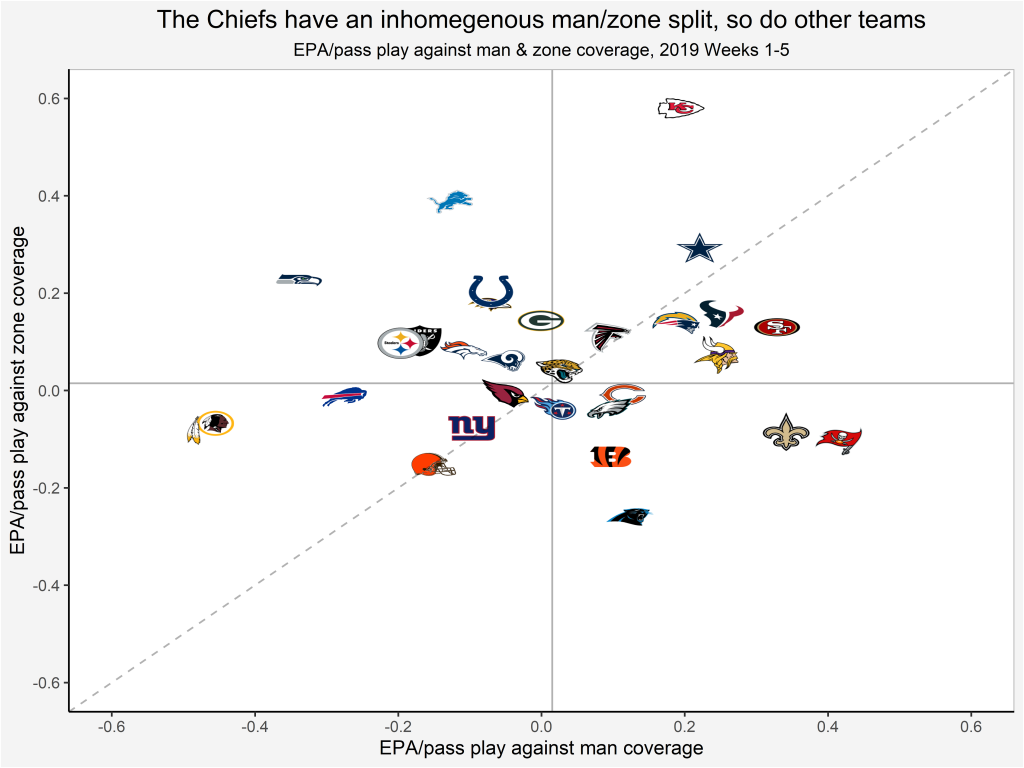 We should note that a lot of this is driven by the Chiefs’ struggles against the Colts: In the first four weeks, they passed for 0.35 EPA per pass play against man coverage, a figure that would rank third in the league. The Chiefs have been outstanding against zone coverage in 2019 and still very good against man coverage, with the exception of the game against Indianapolis.

We also see that the Chiefs’ large discrepancy isn’t unique within the league. For example, the Seahawks have a similar split, ranking fourth against zone coverage but 29th against man coverage. The Buccaneers possess the exact opposite split, they lead the league with 0.41 EPA per pass play against man coverage, but they rank only 27th against zone coverage. The Lions, Saints and Panthers are among other teams with large man/zone splits.

What do these splits mean going forward? To answer that question, we take all of our passing data since 2014 and consider all quarterbacks who had at least 150 dropbacks against both man and zone coverage in a season. For each such quarterback, we take all snaps against man and zone coverage and randomly split them into two halves. We proceed to compute the correlation between the performances (overall, against man or against zone) in the two halves, as measured by EPA/pass play and raw PFF passing grade. 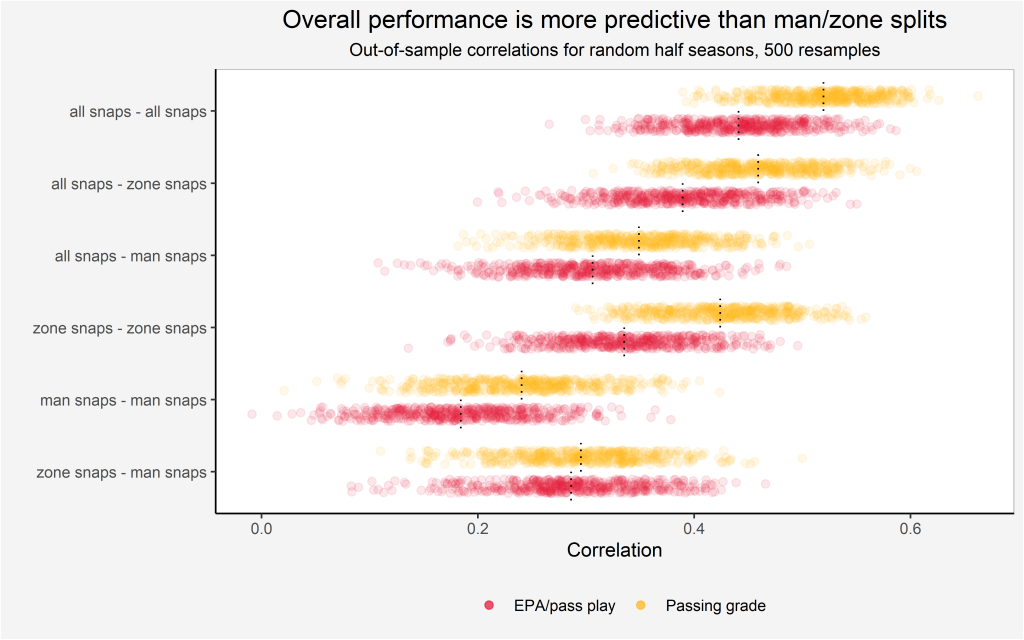 What about the difference between performance against man and zone coverage? If a quarterback or team excels against man coverage, but struggles against zone coverage or vice versa, should we expect this to continue? Given the results above, a negative answer isn’t surprising and that’s exactly what we found. There is basically zero correlation between the difference in one half of the season and the other half of the season.

What does this mean for the Chiefs and their future opponents? Mahomes started his career with a strong stretch against zone coverage but finished 2018 stronger against man coverage. Overall, the Chiefs gained 0.30 EPA per pass play with a 91.8 passing grade against zone and 0.38 EPA/pass play with a 88.0 passing grade against man. Mahomes, his offensive supporting cast and Andy Reid have been excellent against both coverages last year. This and the results from our study suggest that their otherworldly performance against zone coverage and their underwhelming (in terms of their high standards) performance against man coverage in 2019 are both expected to regress towards their overall performance. In other words, we don’t know whether the Chiefs will be better against man or zone coverage going forward and, especially with the prospect of Hill coming back from injury, Chiefs fans don’t have to be concerned that the league has been presented a universal blueprint to stop their offense. Having said that, other teams should certainly study how the Colts were able to slow down Andy Reid and Patrick Mahomes, as the first 23 teams to face them have failed to accomplish just that. Our data, however, suggests there is a lot more to imitating their success than switching to a man-heavy coverage.