More football is never a bad thing. This is an important thing to keep in mind head into the inaugural weekend of the Alliance of America Football league. The football we see on the field isn’t likely to be great, but the league has the potential to be very fun to watch. And just like the NFL, fantasy football makes things even more entertaining.

The problem with this league is where to begin. If you’re trying to start an AAF fantasy football league, you likely won’t have many takers. But that’s fine. Since there are only eight teams in the league, AAF fantasy leagues should really only be six teams. From there, just keep things the same as your NFL leagues with PPR or half-point PPR scoring and standard rosters of 1 QB, 2 RB, 2 WR, 1 TE, and 1 flex. Kickers and defenses are options, and you can probably skip them. Give yourself five or six bench spots and you’re looking at 12 or 13 rounds in your draft.

Of course, the biggest problem you’re going to face isn’t the format, but rather where to host your league. Currently, I’m unaware of any sites who have AAF leagues, so that means you’ll likely have to score it yourself. Welcome to 1994. But the good news is all of this can be done fairly easily in a Google sheet or Excel doc.

But when it comes to drafting players, here’s where things get challenging. If you’ve been around the fantasy block, especially in dynasty leagues, you’re going to recognize a good chunk of the skill position players in this league. However, just because a player has name recognition doesn’t mean that he’s going to be any good. The league didn’t do us any favors either, as there are no team depth charts available in advance of this weekend’s opening games. So the best we can do is use the bits and pieces of information at our disposal around the interwebs to establish AAF fantasy football rankings. 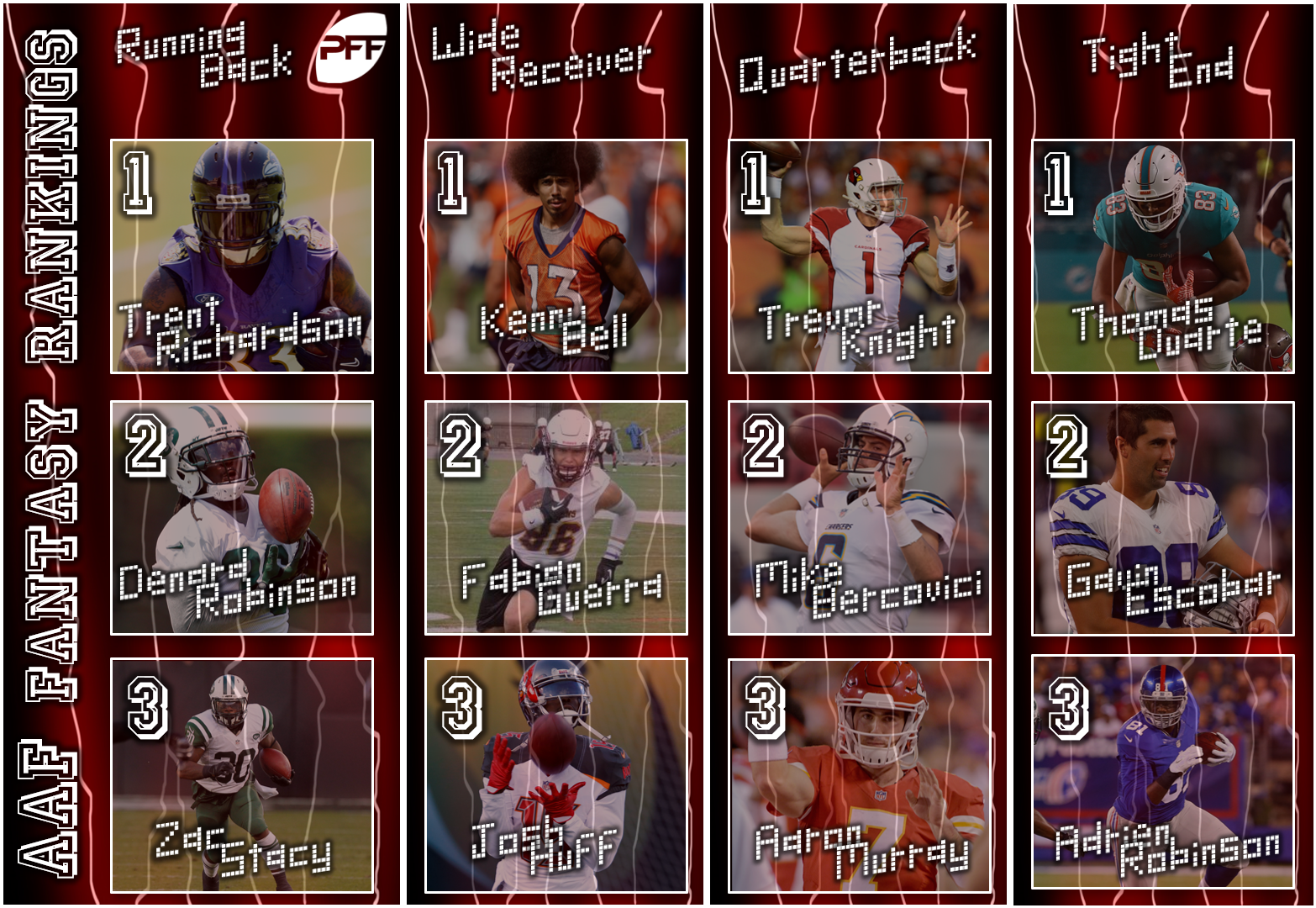 Like with NFL fantasy leagues, running backs should be the priority early in AAF fantasy drafts. Trent Richardson notoriously flamed out of the NFL, but he’s in a good spot to produce and is likely to be the top pick overall. From there, you’ll likely see several former NFL backs come off the board with Denard Robinson, Zac Stacy, Akeem Hunt, and Kenneth Farrow the most likely suspects.

From there, you may not recognize as many names, but a player like Jhurrell Pressley is very appealing.  Pressley has bounced around NFL practice squads, but was also a standout at the college level, averaging 6.9 yards per carry over his 394 rushing attempts at New Mexico. Pressley’s teammate Larry Rose also stands out. He flashed ability as a receiver at the college level with 133 receptions over his four years at New Mexico State.

While names like Matt Asiata and Bishop Sankey might draw some attention in drafts, there are other players who offer more fantasy appeal. Joel Bouagnon is a big-bodied back who notched 600 rushing attempts in his college career at Northern Illinois. D’Ernest Johnson played his college ball at South Florida where he scored a combined 28 touchdowns over four years. Notre Dame fans will recognize Tarean Folston. Though he was banged up for a chunk of his college career, Folston showed promise in his sophomore season when he tallied 1,079 scrimmage yards.

Waiting at quarterback works like gangbusters in one-QB NFL fantasy leagues, but it isn’t likely to be an optimal strategy in AAF leagues. There really isn’t a slam dunk in this bunch, but Trevor Knight stands out as the top option. He’s extremely athletic and posted top performances in nearly every category at the 2017 NFL combine. For fantasy purposes, he may not get a ton done with his arm, but Knight’s ability run bodes well for success.

Unlikely Knight, Bercovici isn’t a threat to rack up yards with his legs, but he did show the ability to put up passing numbers in his senior year at Arizona State. Of course, the major appeal here is if Mike Martz’s offense can be effective in the AAF. Aaron Murray was prolific at the college level and brings a veteran presence that some of the other players at the position don’t have.

Dallas Cowboys fans may remember Dustin Vaughan, who was on the roster back in 2014. He’s intriguing if you miss on the top three options, as is Luis Perez. The Birmingham Iron signal caller is a Division II product who didn’t play quarterback until the college level. He went on to lead Texas A&M-Commerce to the national championship and won the Harlon Hill Trophy as the best player in Division II football for 2017.

Wide receiver isn’t quite loaded up with big names, but there are several who stand out. Kenny Bell was once touted as a deep dynasty stash, but he never materialized with the Bucs. Fabian Guerra played at the Division II level and is known for this catch. Josh Huff had a few cups of coffee at the pro level as a former third-round pick, but his career was derailed after off-field issues.

Mekale McKay never caught on in the NFL, but he has size you can’t teach and comes from a basketball background. Francis Owusu has an extremely light college resume with just 34 catches in four seasons at Stanford, but his size and speed make him an intriguing downfield threat.

A wise man once said that “tight end is brutal for fantasy in the NFL.” Now take that and multiply it by 100 and you have the present state of tight end in the AAF. Thomas Duarte tops the list as an ultra-poor man’s Jordan Reed sans the injury concerns. He’s a move option who racked up 10 touchdowns in his final season at UCLA. Gavin Escobar is more of a traditional tight end, but his five seasons in the NFL should prove very beneficial against AAF competition.

From there, Adrien Robinson caught five balls with the Giants in 2014, Busta Anderson was a seventh-round pick in 2015 who has an awesome name, Garrett Hudson notched 65 catches in three seasons at Richmond, and Scott Orndoff has bounced around several practice squads over the last two years.