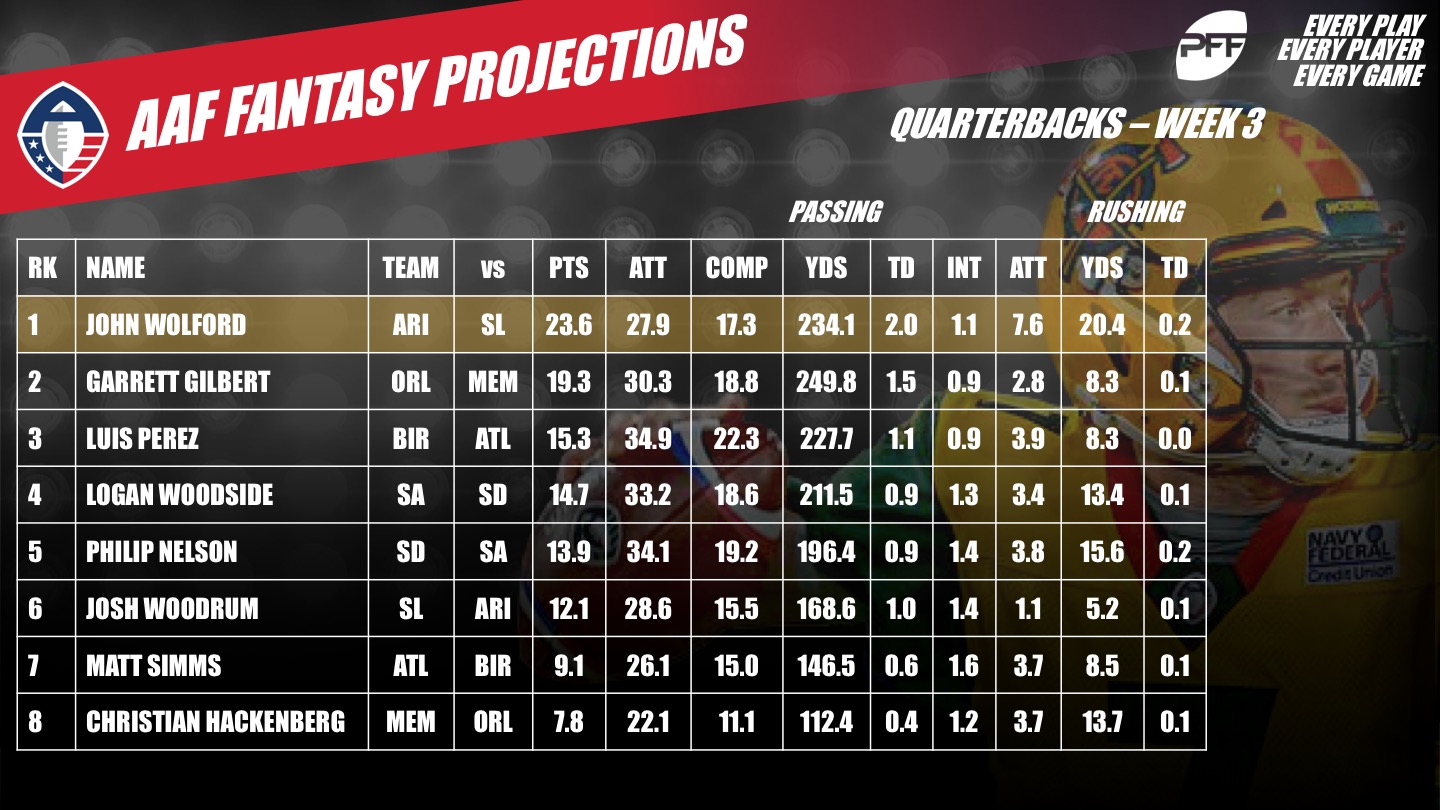 While Garrett Gilbert was the big play last week with the first 300-yard passing performance in AAF history, we actually prefer John Wolford as the top fantasy option. Wolford gets to face a Salt Lake defense that he absolutely torched in Week 1. Gilbert should continue to be productive, though, and he remains squarely in the elite fantasy conversation. From there, things get messy. Perez has yet to throw a touchdown pass, but he’s going up against an Atlanta defense that currently grades out as the league’s worst in coverage. Likewise, Logan Woodside should benefit from going up against the leagues lowest-graded overall unit in the Fleet.

Nothing changes at the top, as Trent Richardson remains firmly entrenched as the top fantasy running back. Richardson is averaging under 2.5 yards per carry, but he’s found the end zone three times and saw heavy using in the passing game last week with six catches on six targets.

From there, things don’t quite look like they did last week. With two weeks of data, we’re started to get a better sense of how teams are using their backfields. Ja’Quan Gardner was the No. 3 overall fantasy scorer in Week 2 thanks to 104 yards and two scores on the ground. Though there’s still a committee in the Fleet backfield with Terrell Watson seeing 14 carries last week, Garner’s upside makes him one of the top options at the position.

Speaking of upside, Kenneth Farrow also flashed playmaking ability in Week 2 both as a runner and as a receiver. Likewise, Zac Stacy is coming off a strong performance with what is currently the most single-game rushing yards by a player in AAF history with 106.

The Salt Lake backfield looks like it’s going to be a tricky one to navigate going forward. Joel Bouagnon was the top fantasy scorer last week, but Branden Oliver actually out-touched Bouagnon 16-12. When in doubt, err toward the volume in fantasy. That being said, Bouagnon should see enough touches to be considered a fringe RB1 play.

Similarly, the Atlanta backfield lacks clarity from a fantasy standpoint. With Denard Robinson inactive last week, it looked like we were going to see a ton of Tarean Folston. Well, we didn’t. Folston had just six rushing attempts, which was two fewer than Lawrence Pittman. And Akrum Wadley came in and racked up eight catches, which led all receivers for the week. So the numbers love Wadley this week, but that’s only if his role continues. Be sure to pay close attention to the very limited information out there on the AAF beat. 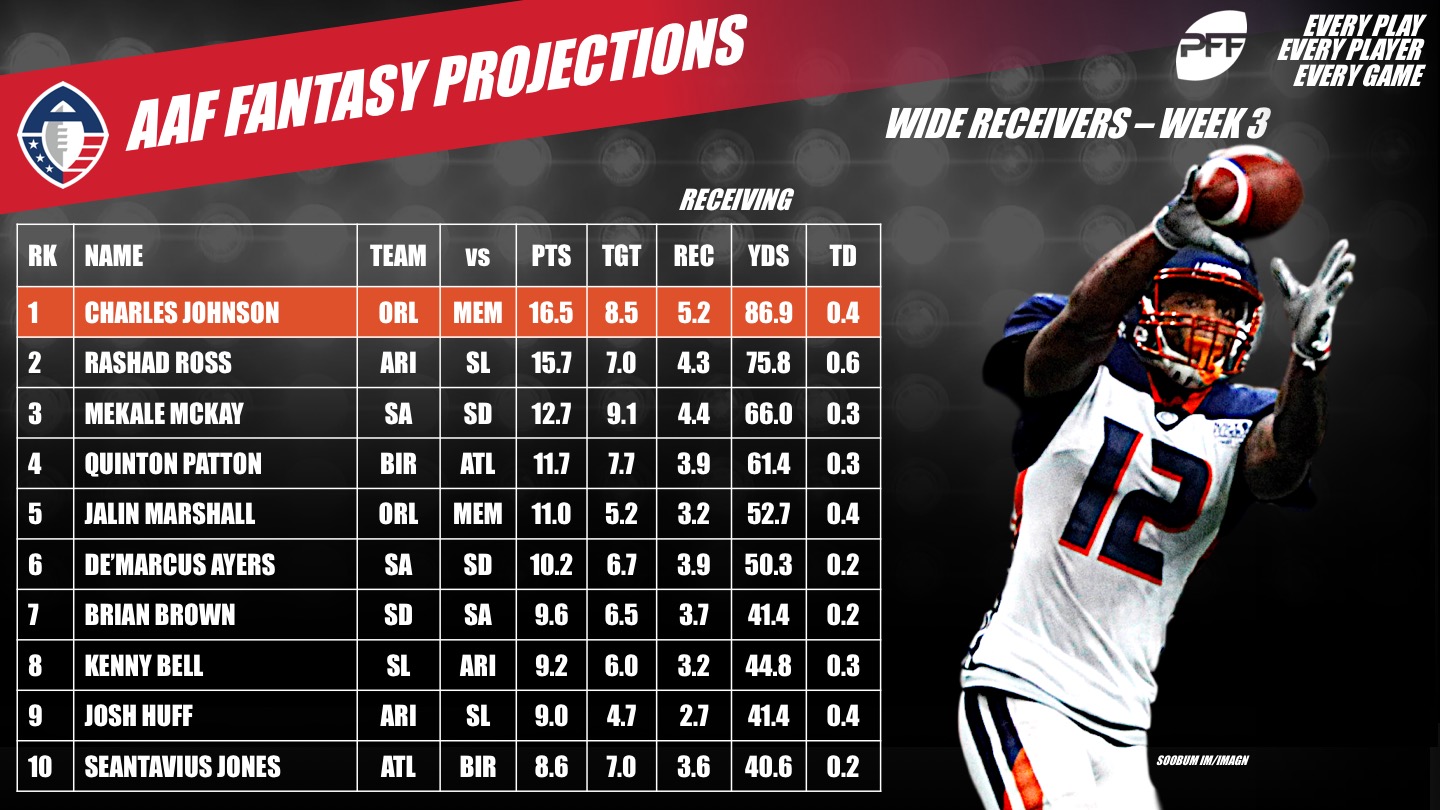 After last week’s monster performance, Charles Johnson is now locked in as the top fantasy wideout, but Rashad Ross is right on his heels. Wide receivers have caught eight touchdowns so far in the AAF. Ross has three of them. Mekale McKay struggled last week with tough coverage coming from Keith Reaser in the Atlanta secondary. He’s a good bet to bounce back with a much more favorable matchup on tap against San Diego. It’s also worth noting that McKay’s teammate De’Marcus Ayers made his AAF debut last week and caught 5-of-8 targets for 80 yards. Ayers is very much in play as a high-volume fantasy option.

Stop me if you’ve heard this one before, but tight end, yeah, it’s brutal. Last week, we didn’t see a single tight end top double-digit fantasy points, and just one player had more than four fantasy points in PPR scoring. So the moral of the story is don’t expect much from the position. Start your top option and pray for a touchdown.