It’s Wednesday and that means it’s time to start making your start and sit decisions for the week. One of the best resources to help you is our flex fantasy football rankings for Week 5 of the NFL season. Remember that rankings change throughout the week, so be sure to check our staff rankings for updates.

2. Todd Gurley, LAR @ SEA (RB2) — The Rams offense is firing on all cylinders, and Gurley is a big reason why.

3. Christian McCaffrey, CAR vs NYG (RB3) — He was a monster before the bye and will pick right up where he left off in this one.

5. Melvin Gordon, LAC vs OAK (RB5) — Gordon has averaged nearly 20 touches per game and was very effective as a runner last week.

6. Michael Thomas, NO vs WAS (WR1) — Shake last week off. Thomas bounces back in a big way against the Redskins.

7. Saquon Barkley, NYG @ CAR (RB6) — Even when Barkley doesn't get it done on the ground he salvages fantasy points as a receiver.

8. Antonio Brown, PIT vs ATL (WR2) — It hasn't been a stellar start for Brown, but he's one of just seven receivers with over a 30% target share through the first four weeks of the season. 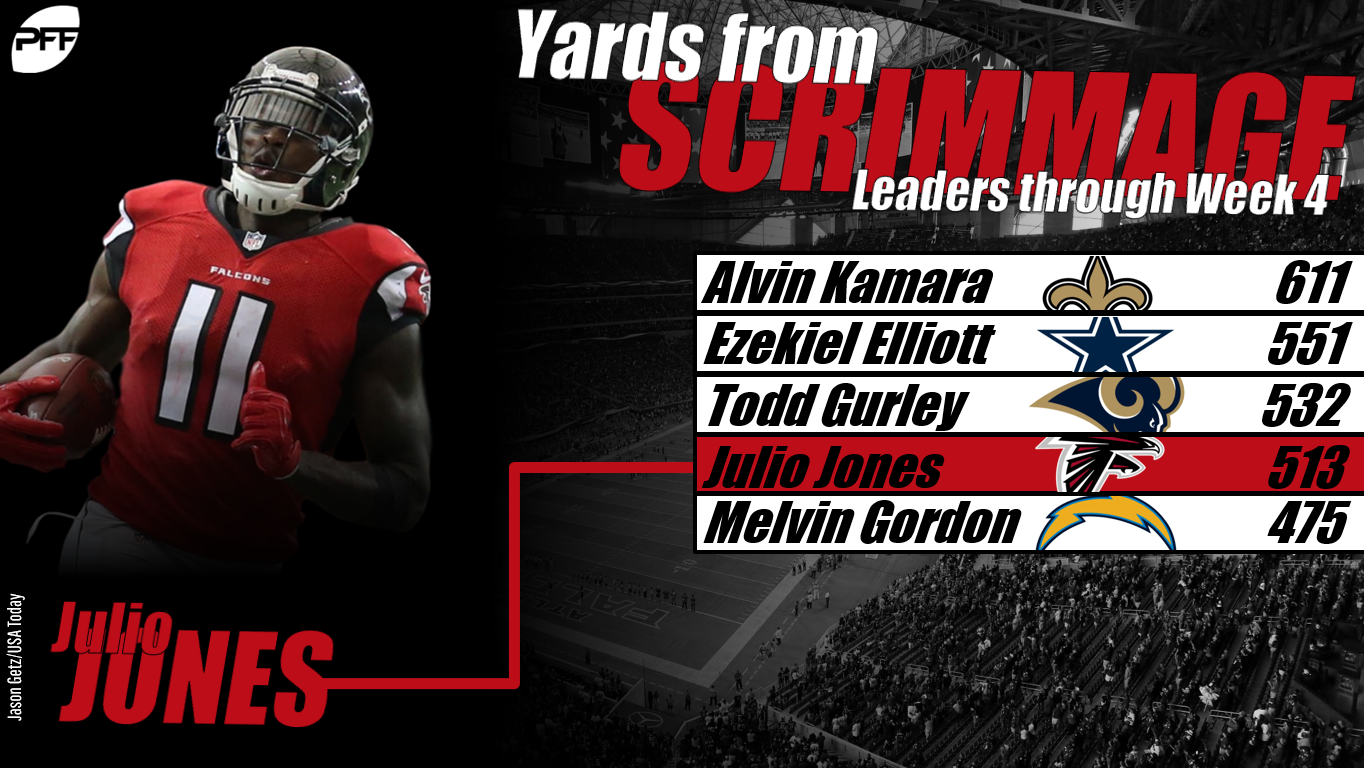 9. Julio Jones, ATL @ PIT (WR3) — Calvin Ridley is scoring all the touchdowns, but Jones is leading the league in receiving yards and is on pace to top 2,000.

11. DeAndre Hopkins, HOU vs DAL (WR4) — He's a target monster and should see even more work if Will Fuller is unable to go.

12. James Conner, PIT vs ATL (RB8) — Conner's days as the feature back could be numbered, but he's a good bet to go off in this favorable matchup.

14. Odell Beckham Jr., NYG @ CAR (WR6) — Okay, so it hasn't been an elite start to the season. But Beckham is still seeing heavy volume and is an every-week WR1.

15. JuJu Smith-Schuster, PIT vs ATL (WR7) — Expect a ton of points in this contest, which means Smith-Schuster should bounce back from last week's somewhat disappointing fantasy line.