What can fantasy owners learn from the type of data we offer at PFF? There are so many premium tools available here that can give you edge in your leagues.

In our latest series, we are taking a look at some of the top fantasy producers over the past three seasons and identify some PFF Signature Stats they excelled in during that period.

In addition, we identify some trends of younger players that have enjoyed similar success in those areas in smaller sample sizes to help identify some potential rising fantasy stars.

We’ve already looked at some factors for success at quarterback and running back. Up next, wide receivers get put into the spotlight. 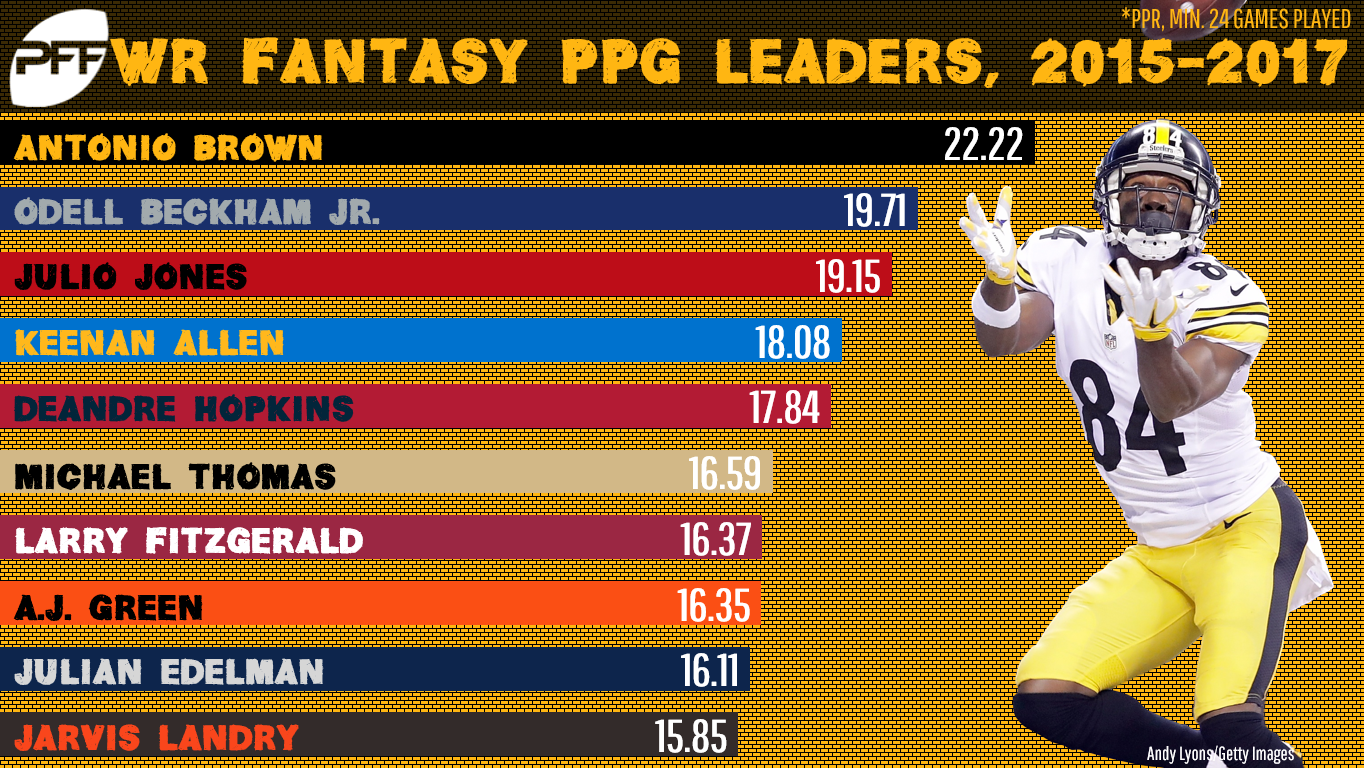 Brown has finished among the top three wide receivers in PPR leagues every season since 2013, including being WR1 three times during that span. Consistency and durability work in his favor. He’s only missed three games during that stretch while averaging 116.4 receptions for 1,569.6 yards and 10.4 touchdowns per season.

Brown has excelled in several statistical categories over time, including his deep passing catch rate. Last season he displayed modest numbers with 27.7 percent of his targets coming on passes 20 yards or more with a catch rate of 32.6 percent. The previous three seasons he placed inside the top five among qualifiers in deep pass catch rate.

Robby Anderson shined with 941 yards and seven touchdowns on 63 catches and 111 targets. Weeks 6-13, only Brown and Marvin Jones Jr. scored more points in standard leagues. His 16.1-yard average depth of target and 10.7 yards per target numbers were elite during that span. For the season, the Jet had a 46.2 percent catch rate on deep ball passes.

Despite finishing third in the NFL with 19 red-zone targets, Jones failed to score in 14 different games last year and finished with three touchdowns. The veteran still finished as WR7 (PPR) and ranked second in receiving yards (1,444).

Fourth-year wide receiver Marquise Goodwin shined during his first season in San Francisco and really clicked late in the season with Jimmy Garoppolo after he took over as the team’s starting quarterback. Goodwin posted a 1.94 YPRR in 2017 and an impressive 17.2 yards per reception.

Thomas was a force during his second season as a pro as he finished seventh in targets (139), third in receptions (104 – Saints’ team record) and sixth in receiving yards (1,245). He was particularly effective in the slot where his 3.63 yards per route run was unmatched as he wound up as WR6 in PPR points last season after a WR7 finish as a rookie.

The Saints’ wideout opened some eyes up as a rookie with 117.5 WR rating (passer rating when targeted) and followed it up with a solid 104.8 mark in 2017. He has emerged as Drew Brees’ safety net and favorite target. That should help him have continued success in the season ahead.

There was plenty for fantasy owners to like from Cooper Kupp as a rookie. His 113.6 WR rating was the best mark by any qualified rookie in 2017. Running 58 percent of his routes from the slot, he averaged a nice 2.02 YPRR.

Fitzgerald has added to his Hall of Fame resume quite nicely over the past few years despite being on the wrong side of 30. He’s been a top 10 WR (PPR) in each of the last three seasons. During that span he’s second in receptions (325), sixth in receiving yards (3,394), and ninth in receiving touchdowns (21).

The sure-handed Fitzgerald had success despite playing with some mediocre quarterbacks. His 3.54 percent drop rate was the sixth best mark among wide receivers with 50 percent or more of their team’s targets in 2017. He placed inside the top 10 here in each of the previous two seasons as well.

During his four-year stint in Miami, Landry became a PPR force, capped off by him finishing as WR4 in 2017. He led the NFL with 112 receptions last season and now has 400 catches through his first four years in the league. That is the most in league history.

Landry has made his living in the slot. Last season 22.4 percent of his targets came from the slot and he delivered a 78.2 percent catch rate registering a league-high 68 receptions from the slot. Only Larry Fitzgerald had more targets in the slot.

JuJu Smith-Schuster reeled in 58 of his 77 targets for 917 yards and seven touchdowns while earning the highest WR grade by a rookie in the PFF era. He led all wide receivers with an impressive 11.9 yards per target and posted an average depth of target for 10.4. Despite not seeing a ton of targets in the slot (36 of 77 targets), he was efficient delivering an impressive 75.0 catch rate when lined up there.