PHILADELPHIA, PA - DECEMBER 26: DeSean Jackson #11 and Jordan Reed #86 of the Washington Redskins react in the game against the Philadelphia Eagles on December 26, 2015 at Lincoln Financial Field in Philadelphia, Pennsylvania. (Photo by Mitchell Leff/Getty Images)

Following a season where Kirk Cousins emerged and “You like that?” became a rallying cry/internet meme, things are looking up in Washington. Jay Gruden’s squad ranked 10th in points per game and 11th in passing yards per game. That’s quite a feat considered where they stood this time last year with Robert Griffin III still projected to be their starting quarterback.

Instead, it was Cousins who opened the season under center, and it wasn’t pretty early on. After the first six weeks of the season, he sat 23rd in fantasy scoring. But something clicked for Cousins around the midpoint of the season, and he went on to finish 10th in fantasy scoring with the league’s best completion percentage (69.8). After Week 6, only Cam Newton, Russell Wilson and Drew Brees had more fantasy points than Cousins.

Of course, the million-dollar – or in Cousin’s case the 20-plus-million-dollar – question is whether he can repeat last season’s success. He’s currently going as the 14th quarterback in drafts, which feels just about right. Despite his impressive stretch run, the sharp move is to view Cousins as a borderline QB1 with the potential to outplay his ADP. 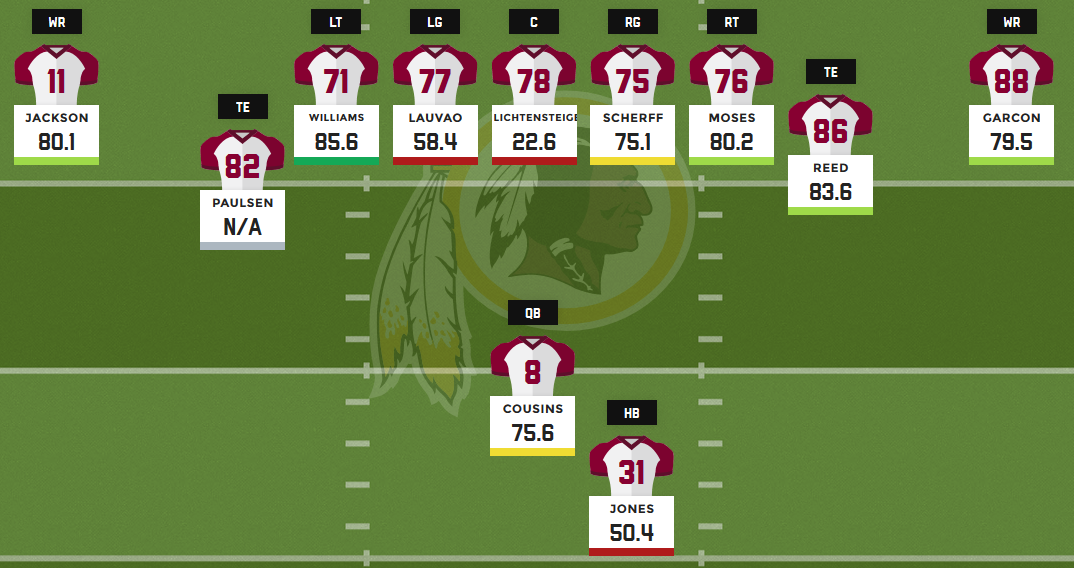 The good news is that Cousins has plenty of weapons to throw to this season. Unlike many teams, Washington’s No. 1 receiver does not play wideout. But to be fair, Jordan Reed is essentially a wide receiver playing tight end. A constant mismatch, Reed led all tight ends in scoring over the last nine weeks of the season and posted a position-high 0.41 fantasy points per opportunity. While Rob Gronkowski is still fantasy’s No. 1 tight end, Reed has a legitimate shot at finishing the year tops at the position.

DeSean Jackson isn’t likely to see heavy target volume in this offense, but he’s always a big play waiting to happen. That’s been his modus operandi throughout his career. In eight professional seasons, Jackson has topped 100 targets just four times. However, he’s consistent among the league leaders in average depth of target. Last year, Jackson was targeted 20-plus yards downfield on 38.6 percent of his targets. Jackson isn’t an ideal PPR option, but his big-play upside works well in standard scoring leagues and best-ball formats.

Rounding out three-receiver sets is likely to be Pierre Garcon and Jamison Crowder, with rookie Josh Doctson also in the mix. Garcon is in the final year of his contract with the team – as is Jackson – but his roster spot appears to be safe. Garcon surprisingly finished last season as a top-36 fantasy receiver, but that’s about his fantasy ceiling. With so many mouths to feed, Garcon simply doesn’t offer any upside and shouldn’t be considered for fantasy purposes.

Likewise, Crowder has a somewhat limited fantasy profile. He did draw praise for his performance in offseason practices, Crowder is still far down in the target pecking order. The presence of Doctson could also limit Crowder’s work. One of the top receivers in this year’s class, Doctson is coming of a massive 2015 campaign, where he was one of the most productive receivers on a per-route basis with 4.07 yards per route run. Doctson might not see a lot of targets in his rookie season, but he is expected to be a red-zone factor and certainly could surface on the DFS radar at points throughout the season.

[If you take Jordan Reed where he's going in drafts, what does that do to the rest of your roster? Check out our PFF Draft Master tool and try a mock draft, complete with offensive line grades, full projections and all the PFF data.]

At running back, Matt Jones sits atop the depth chart. The jury is certainly still out on whether Jones is actually capable of handling feature-back duties, but it appears that’s exactly what he’s going to get on a very thin depth chart. Jones flashed at times last season, but largely struggled in all three phases of the game. He finished the year with an uninspiring 3.4 yards per carry and managed just three runs of 15-plus yards. He also fumbled five times. But Jones is the best of what’s left and appears to be in the driver’s seat for a significant role in this offense. As such, he’s in line for a heavy workload in a potent offense and should be considered a risk-reward RB2.

Chris Thompson will remain the passing-down back, a role in which he posted 1.40 yards per route run last year. But he’s unlikely to see much work as a runner, as he carried the ball just 35 times last season. That means backup duties will come down to two rookies: Keith Marshall and Mack Brown. Marshall is dripping with athleticism, but has a checkered injury history and incomplete college resume. Some even believe that he won’t make the 53-man roster. Whichever player wins the job will be the Jones handcuff to own.

On the defensive side of the ball, there unfortunately isn’t much value to be had along the defensive front in Washington outside of big play leagues where Ryan Kerrigan is an asset. At linebacker, Will Compton is an interesting name who is all but locked in as a starter and has the potential to be an LB3 option. Some of the best IDP value on this team might just come from rookie Su’a Cravens, who enters the league as a hybrid linebacker/safety. He’s likely to have safety eligibility on most fantasy commissioner sites. Cravens will likely play linebacker in nickel situations, which means the potential for strong tackle volume. He’s a candidate to finish as a DB1.