A former two-star recruit with only one offer from the Mid-American Conference’s Eastern Michigan in 2015, Maxx Crosby has never been showered in praise or highly commended of his efforts on a national scale. And that still rings true today as he prepares for the 2019 NFL Scouting Combine buried beneath a list of bigger names.

Crosby, however, has learned to thrive as the underdog.

“I was a guy that nobody really talked and made it to where I’m at right now,” Crosby said in a February interview with Pro Football Focus. “I’m kind of in a similar position, but I’m going to have a chance at the Combine to show all 32 teams how I can move and put all the questions aside.

“I’m not the guy that gets all the glory from the start, but at the end of the day, I’m going to be one of those guys that comes out of this draft class… I just use it as another chip on my shoulder, pure motivation.” 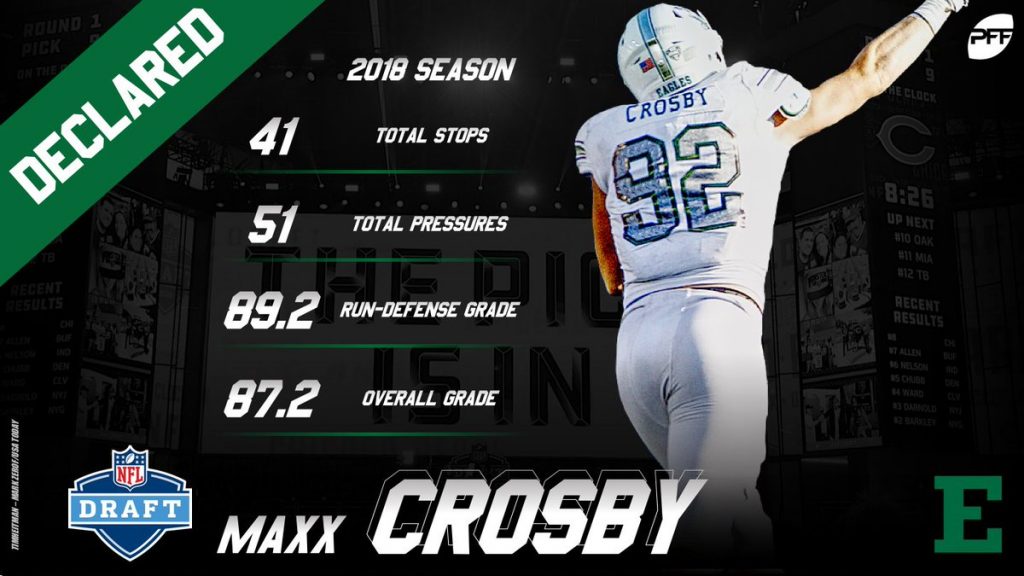 Despite his long, slight frame (6-foot-5, 265 pounds), Crosby thrived in run defense in each of his final two seasons with Eastern Michigan. He was the first to make contact with the ball carrier on 13.7% of his run-defense snaps and recorded an 8.7 run-stop percentage across his redshirt sophomore and junior seasons, ranking 10th and tied for 11th, respectively.

“It’s definitely a mentality, and I love playing against the run,” Crosby said. “A lot of people kind of use my weight as an excuse for me to just be a pass-rusher, but I think if you turn on the tape and watch, I’m super violent at the point of attack and constantly playing in the backfield.”

Crosby’s violence and success aren’t lost in his pursuit for the quarterback, either.

Crosby’s early-down pass-rush percentage also stands out among those at his position, which speaks to his ability to win pass-rush snaps away from known passing downs. His two-year pass-rush win percentage on first and second down (21.8%) ranks third among qualifiers.

“As a pass-rusher, it’s all about having the tackle not know what you’re going to give him,” Crosby said. “I love to mix it up, keep ‘em on their toes the whole game. I believe my hands are definitely a strong point and my get-off definitely helps out a bunch… I’m just an all-around pass-rusher, and I can get the ball out of his hands, as well.”

Of course, Crosby’s significant successes will still be overlooked because he has limited experience against Power 5 competition. He is eager to push scouts back to the tape with his performance at the Combine.

“The first thing [NFL teams] are going to figure out is that I’m a lot more athletic than a lot of people think,” Crosby said. “I feel like I’m going to test super well. I definitely plan on showing everybody that I’m a competitor. I love competition. I’m going to do everything I can to make it a competition and be the best at every single drill.”

Crosby will come to Indianapolis masked by his small-school status and tweener frame, but NFL teams should come away with a much different, more positive impression of him when he leaves.