A statistical sneak peek at the QB class of 2019

Five quarterbacks went in the first round of the 2018 NFL Draft, bringing a new hope to their respective franchises in the process. While those teams are not likely looking ahead to the next crop of draft eligible signal-callers (though maybe some should) there are plenty of teams that will be closely watching the upcoming college football season with the hope that they spot their future franchise quarterback.

Projecting how the quarterback rankings will look in six months is easier said than done. Before the start of last season even the biggest Baker Mayfield supporter (@PFF_STEVE) had Sam Darnold as his No. 1 pick. Perhaps the best example of how much a season can change one's outlook, can be seen by how opinions changed pertaining to the (eventually) much-debated Wyoming quarterback Josh Allen. Allen threw the highest percentage of big-time throws in 2016, before ending up ranking seventh in the class in big-time throw rate in 2017, while his rate of turnover-worthy plays actually increased (ranked 29th of 38 in the class). Additionally, Allen earned the highest grade per snap when under pressure in 2016, a situation that we know is unstable year-to-year at the NFL level, more than double what his grade was on clean dropbacks (a far more stable metric). Unsurprisingly, Allen’s grade when clean stayed relatively stable in 2017 (actually increasing slightly – ranking 14th in the class) while his grade under pressure plummeted to 33rd in the class. Eventual No. 1 pick Baker Mayfield ranked first in the nation in grade from a clean pocket in 2016 and repeated that feat in 2017 en route to the most dominant quarterback season since PFF began grading college football in 2014.

With this previous draft class fresh in our minds, we will use the PFF play-by-play grading along with some of the research we’ve done on ‘NFL throws' (the throws that separate quarterbacks at the NFL level) to take a more nuanced look at some of the quarterbacks who are likely to be at the forefront of the 2019 draft conversation.

What is stable season to season?

While football is a game riddled with small sample sizes and the accompanying noise, there are aspects of the game that offer more predictive power than others. In the inaugural Pro Football Focus Quarterback Annual, we made the case that metrics generated in clean pockets, non-play action passes and passes thrown in 2.5 seconds or less are more stable those earned in pressured pockets, via play action, in 2.6 seconds or more or thrown more than 20 yards downfield. Metrics like adjusted completion percentage are more stable than passer rating, which is more stable than the rates of touchdowns and interceptions. PFF grades (per snap), rates of +0.5/-0.5 throws, rates of positively- and negatively-graded throws and metrics like PACR (developed by Josh Hermsmeyer) are all generally more predictive than even the aforementioned traditional passing metrics on a season-to-season basis, and rates of negatively-graded throws are more stable than rates of positively-graded throws.

While the data is relatively scarce (we have three cohorts of players with college PFF data and subsequent NFL PFF data), the results are so far encouraging in terms of translation from college to pro. A draft that includes five first-round quarterbacks, and a few others that will likely see the field at some point soon, promises to sharpen our ability to quantitatively handicap the transition for future collections of pro prospects.

One question remains, however: how predictive is our college data from one college season to the next?

We took all college quarterbacks with at least 200 passing attempts in consecutive seasons from 2014 – 2017 and measured how stable PFF grades, yards per attempt, average depth of target, PACR, big-time throw and turnover-worthy throw rates were season-to-season.

We found that, much like for NFL quarterbacks, the rate of negatively-graded throws was the most stable among metrics, followed closely by depth of target, rate of positively-graded throws, overall grade per snap, PACR and yards per attempt. Turnover-worthy throw percentage was more stable than big-time throw percentage, but neither of these two were anywhere close to as stable as the first collection of metrics.

As with NFL data, clean-pocket metrics were more stable than those generated from pressure, but the difference in PFF grade generated on the two subsets of throws is not as pronounced for college players as it is for pro players. The same is true for the difference between quicker passes and passes that take longer to throw, and data for passes thrown more than 20 yards downfield is noisier than that for shorter throws. The gap in stability between play-action metrics and non-play-action metrics is bigger than that for pressured/non-pressured and quicker/slower throws.

The last piece of the puzzle is looking at what we’ve been referring to this offseason as “NFL throws,” which are subsets of throw types that add the most value at the NFL level and are the most variable in terms of PFF grades and expected points added. While it’s true that a significant percentage of throws that are made by college quarterbacks do not translate in a meaningful way to the NFL level, looking at how a quarterback grades on the throws that do, is a good start towards properly contextualizing quarterback play from college to pro. All rankings in terms of NFL throws were for players with more than 150 attempts in 2017.

It’s with this context in place that we can go into the 2018 season with a statistically-backed means by which to evaluate and project well-regarded quarterback prospects in an attempt to see who will be the Mayfields, the Allens and the Rosens of the world in 11 months: 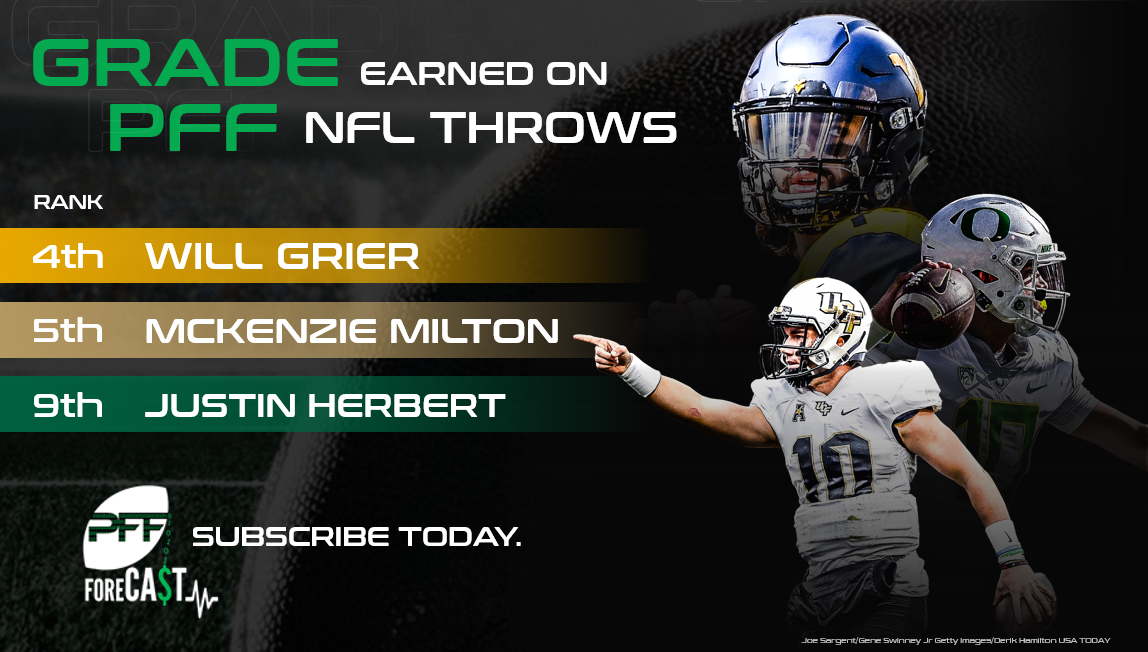 After transferring from Florida and sitting out the entire 2016 season, Grier put on an aerial assault. He finished fourth in the nation in grade per droback behind Mayfield, Rudolph and a player to be discussed shortly while also ranking third in grade from a clean pocket. However, of the top-10 quarterbacks in overall grade per snap, he made the highest rate of negatively-graded throws. Among the recent draft class, only Mayfield bested Grier in grade on non-play action dropbacks while Justin Herbert also barely edged Grier.

Grier’s strong rank in NFL throws has a lot to do with his ability to produce on when targeting receivers at or past the line of scrimmage. On throws at or up to five yards past the line to gain, Grier earned the 10th-highest grade in the nation last season (Rudolph, Mayfield and Rosen were all in the top-five). Grier made his money on the deep passes (20-plus yards downfield), throwing the second-most in the nation (Darnold) and earning the 10th-highest yards per deep pass attempt (15.3).

Much like Mayfield before him, Milton will be dinged not only for his height, but for the perception (reality) that his supporting cast had a lot to do with his success. While Mayfield’s EPA generated on non-NFL throws was first among all college passers in 2017, Milton wasn’t far behind at 12th. As with Mayfield, though, the numbers on throws that matter strongly suggest that he will continue to be an elite college signal-caller in 2018, regardless of whether his stature will keep him from realizing an NFL dream.

Herbert’s 2017 was shortened by injury, but left plenty to be excited about. He earned the second-best grade per dropback from a clean pocket, which was behind only Mayfield (though his yards per clean pocket attempt were nearly three yards shy of Baker). Herbert also did decently well at the most stable of college metrics, negatively-graded throws, ranking 22nd of 138 quarterbacks and first among the group of players discussed in this section. Only Mayfield, Rudolph and Rosen ranked better in negative-throw percentage among players drafted in 2018. Herbert also led the nation in yards per attempt under pressure and ranked 12th in pressure grade per snap, this is a relatively unstable metric not to mention the fact that Herbert was under pressure at the 19th-lowest rate last season. 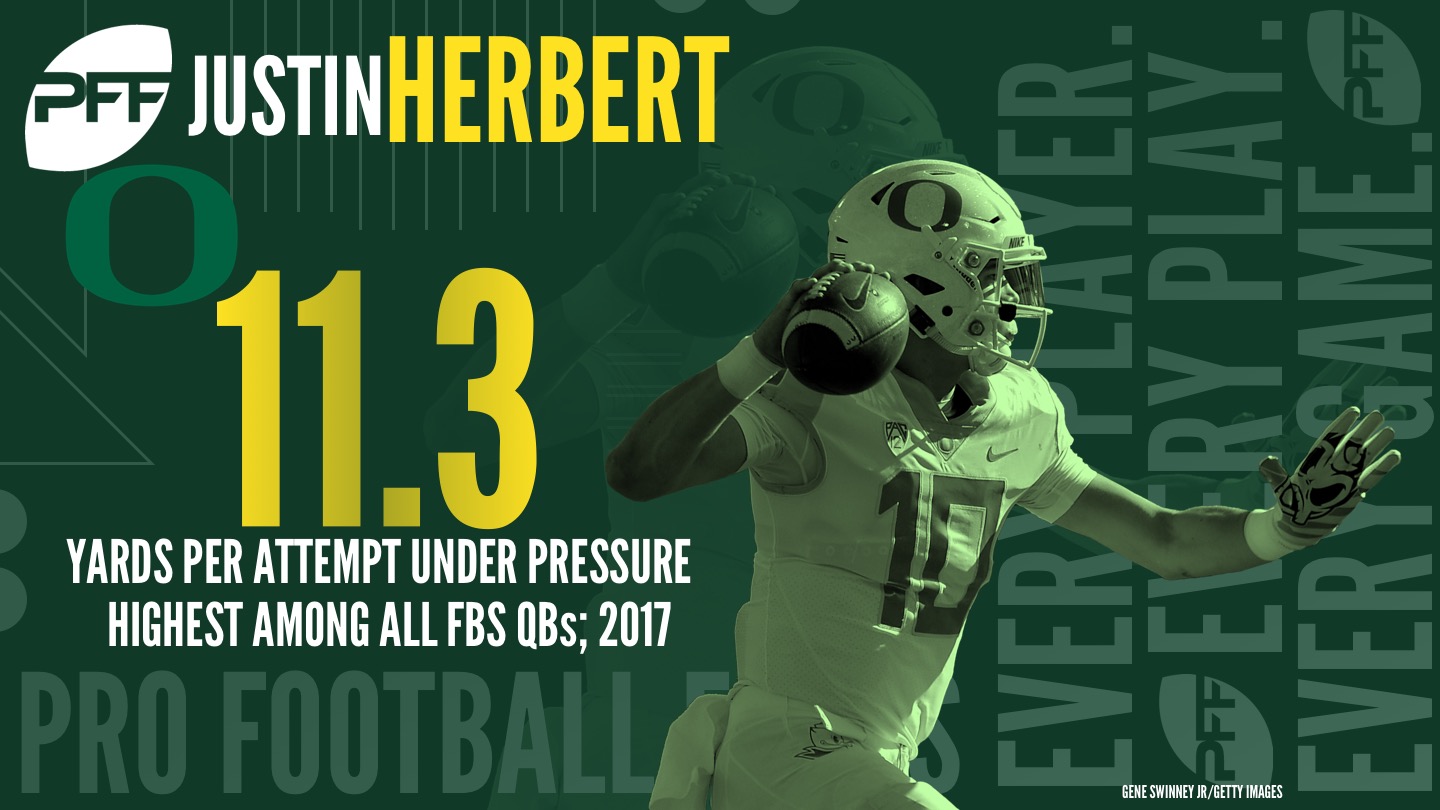 Herbert’s grade on throws at or up to five yards past the line to gain ranked 19th of 131 and his yards per attempt on that subset ranked 12th – backing up his stellar rank on NFL Throws.

Missouri’s Drew Lock gets there in big chunks, generating a top-10 average depth of target in all of college football a season ago (over 11 yards per pass in the air), and converting over 82 percent of air yards into actual passing yards in the process. This penchant for throwing downfield shows up in his lower accuracy values (71.6 percent), but also in his top-five mark for most passing yards on throws more than 20 yards downfield (1,493).

If Lock is going to improve his draft stock, he may need better help from his supporting cast (his EPA generated on non-NFL throws was just 42nd in college football last year) and improved efficacy throwing the shorter passes (he actually generated a negative grade when throwing passes 10 or more yards in the air) that are common place in the NFL. He was fine when throwing quickly (under 2.5 seconds, top 15), suggesting that – at least in rhythm – he has the goods to improve in that area.

Patterson will be in the intense spotlight that comes with being Jim Harbaugh’s quarterback. He has a fairly small sample of throws from which to glean any insight having dropped back less than 500 times in his two seasons at Ole Miss. Patterson ranked 39th in clean pocket grade and 59th in grade under pressure last year. He finished the season ranked 82nd of a 138 quarterbacks in avoiding negatively-graded throws. Patterson ranked 67th on throws to targets at or up to five yards past the line to gain in 2017. He will be looking to improve on a bigger sample in the big house.

Stidham is an interesting case of someone whose PFF grades fell off in his 976 snaps for Auburn in 2017 from his 337 snaps in Baylor in 2015. Some of this can be attributed to running, but he was also simply less accurate, going from an 81.0 adjusted completion percentage in 2015 to a 75.3 mark in 2017. His accuracy percentage when clean, however, was fourth among college passers during his first season with the Tigers, which is a good sign. His drop off from 132.4 to 88.8 in passer rating with and without play action, though, is a sign for concern as he enters 2018.