This week we’re writing about safety prospects — and for good reason. Safety is an important aspect of coverage, which is the most important thing a defense does. Additionally, coverage is a weak-link system, meaning that the problem is solved with numbers more than it is with stars, and the fastest way to solve numbers problems on your roster is through the draft.

Kyle Dugger represents an interesting projection. He is a fifth-year senior out of Division II Lenoir Rhyne. In his year-23 season for the Bears, he earned a 76.7 coverage grade, allowing less than 35 percent of passes into his coverage to be complete, while generating an 81.7 run defense grade.

When stepping up in class, though, Dugger struggled a bit in 45 Senior Bowl snaps, allowing two touchdowns in coverage and only generating one stop, after a week in which he forced two incompletions in coverage during one-on-one drills. He followed up this less-than-stellar performance with an impressive showing in Indianapolis, running a 4.49 in the 40-yard dash and producing a 42-inch vertical jump and 134-inch broad jump.

With all of this conflicting information — his age, level of competition, Senior Bowl struggles and Indianapolis exploits — we turn to our college-to-pro projection system, which takes all of these data points into consideration, to project Dugger as an NFL player.

How Dugger Projects as a Coverage Player

Speed and explosiveness are big components of playing well in coverage. As such, we like Dugger here, as he projects similarly in terms of completion percentage against and playmaker rate (rate of interceptions and pass breakups) as LSU’s Grant Delpit, Minnesota’s Antoine Winfield and Iowa’s Geno Stone, with statistical comps like Ricardo Allen and Eric Reid: 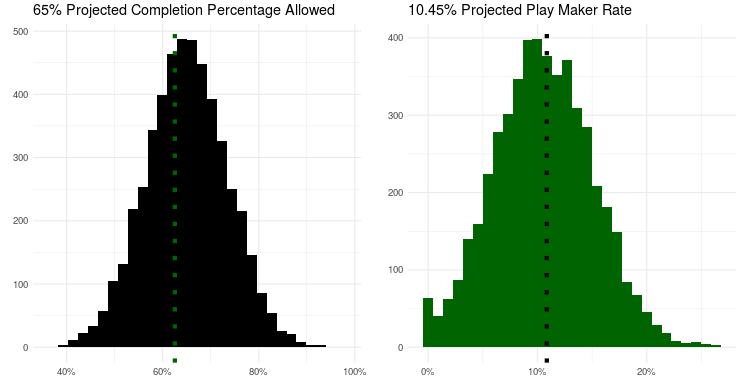 Kyle Dugger’s projected completion percentage allowed and play maker rate during the first five seasons of his career, in the context-free environment.  Vertical dotted lines reflect league median during a player’s first five years at the safety position from 2015-2019.