Far-too-early mock drafts rarely ring true in April, but the sentiment behind PFF Senior Analyst Steve Palazzolo’s picks for the Oakland Raiders in his Mock Draft 2 is right on the money.

Baker, who comes off the board with the Raiders’ fourth overall pick in the mock draft, is currently the highest-graded cornerback in the FBS, as his 91.4 overall grade and 91.6 coverage grade both lead FBS cornerbacks with 200-plus coverage snaps this season. He has allowed receptions on just 15-of-31 targets (48.3%) for 117 yards, seven first downs, zero touchdowns and two interceptions.

Among that same group of FBS cornerbacks, Baker ranks first in forced incompletion percentage (41.9%), sixth in passer rating when targeted (31.3), tied for sixth in yards allowed per coverage snap (0.50) and 19th in first downs allowed per target (22.6%). He has also not missed a single tackle in coverage.

Baker is the best cover cornerback in college football right now and will likely finish his senior season that way. And Oakland couldn’t need him any more than they do now.

When he hasn’t been injured, 2017 first-round pick Gareon Conley has been in and out of Jon Gruden’s doghouse. He’s flashed promise in bursts, but his 66.7 career coverage grade speaks to his inconsistencies and lack of experience. Conley and fourth-round rookie cornerback Nick Nelson, who also hasn’t seen much of the field, are the only two Raiders cornerbacks signed through next season. Calling cornerback a need for Oakland would be an understatement. 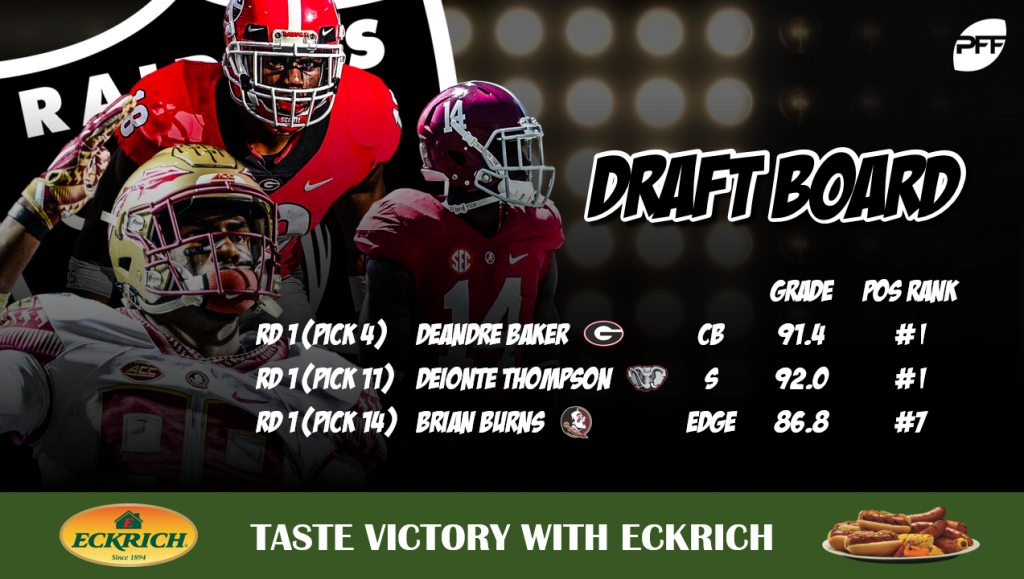 Safety is in a similar boat to cornerback for Oakland, as well. Though the front office has made efforts to beef up the position with 2016 first-round pick Karl Joseph and 2017 second-rounder Obi Melifonwu, neither of the two have kept their heads above water in the NFL.

Enter Thompson who, like Baker, leads all FBS players at his position in overall (92.0) and coverage grade (91.3) this season. His versatility also stands out as the best in college football, as he’s proven more than capable of making an impact at several different positions in college.

Covering slot receivers this season, Thompson has allowed just four receptions from 11 targets for 21 yards, one first down and logged an interception. Among safeties with at least 10 targets when covering the slot, Thompson ranks tied for fourth in forced incompletion percentage (36.4%), fifth in passer rating when targeted (7.0) and fifth in yards allowed per reception (5.3).

Oakland’s current slew of safeties, Reggie Nelson, Marcus Gilchrist, Erik Harris and Joseph, all lack such versatility and of the four veteran defensive backs, Joseph is the only one signed beyond this season, and his name is already tied to trade rumors.

Following the trend, Oakland has invested in pass-rushers in recent offseasons. But Khalil Mack was the only worthwhile investment, and he has been since shipped off to the Chicago Bears. None of the other Raiders draft picks (i.e. Mario Edwards Jr., Justin Ellis, Shilique Calhoun) or offseason acquisitions (i.e. Bruce Irvin) have had sustainable, positive impacts as pass-rushers.

Though Oakland did double-down on pass-rushing talent in 2018, picking Arden Key, P.J. Hall and Maurice Hurst, early returns show that Gruden & Co. are far from done bolstering the position. This leaves Oakland no choice but to pull the trigger on Burns.

The Seminole currently ranks seventh in overall grade (86.8) and pass-rush grade (86.5) among qualifying FBS edge defenders. He also leads all edge defenders in total pressures (51) and tied for fourth in pressure rate (17.2).

The Raiders have fallen into their second rebuild in five years after going 12-4 in 2016, and while much of the blame has been placed on Derek Carr’s shoulders, the team’s defense has done their signal-caller no favors.

Through Week 8 in 2018, the Raiders’ defense ranks last in the NFL in total pressures (56), last in pressure percentage (24.6%) and 29th in passer rating allowed (115.6). In a pass-happy league, Oakland is drawing nothing but frowns on the defensive side of the ball. Blame largely can't be placed on one specific unit but the lack of talent across the board is glaring.