The NFL draft is all about finding value. The more a player can do for a team, the more valuable they find themselves among teams on draft weekend. The following eight players offer tremendous value, as they are good enough at their respective positions to get them ranked on our positional big boards but also offer their prospective new NFL team game-breaking special teams return ability. 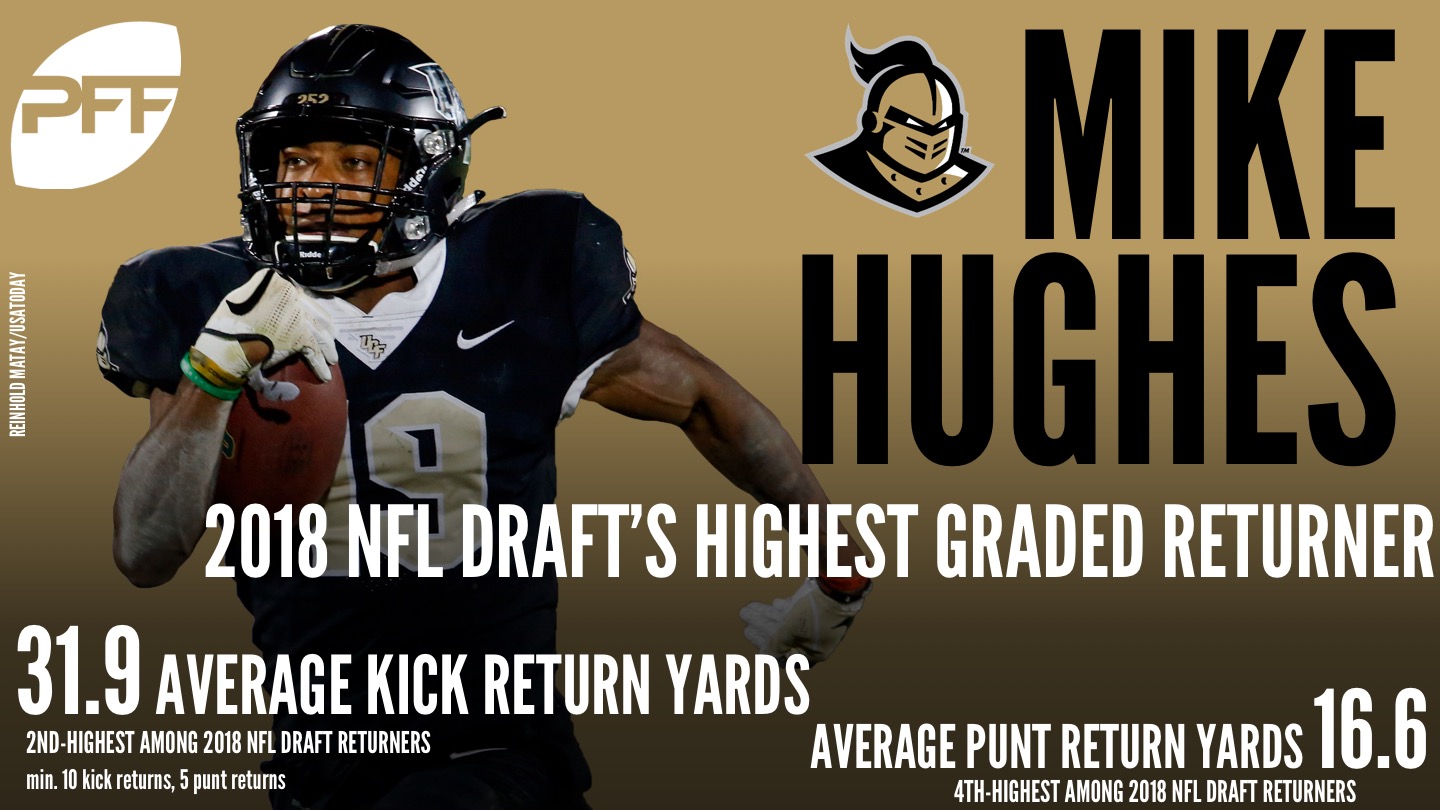 Hughes didn’t have much of a return specialist resume before the 2017 season, as before last year he had only three career kick returns for 63 yards at UNC before transferring to UCF. However, Hughes showed last season that he is deadly both as a kick and punt returner. He had 20 kick returns for 637 yards (31.9 average), two touchdowns, and the highest kick return grade of any player in the draft class. Hughes also had 14 punt returns for 233 yards  (16.6 average) and one touchdown. Hughes will offer his NFL team all of that in addition to his first-round cornerback ability.

Kick return grade ranking: tied for No. 5 in the draft class

A 230-pound man flying downfield returning kicks isn’t a common sight and seeing Barkley do it is a bit reminiscent of Michael “The Burner” Turner coming out of Northern Illinois. The NFL team that drafts Barkley in the first round might not want to use him often on kick returns, but if they do put him back deep, he will be a threat to score on every return. In 2017, he had 15 kick returns for 429 yards (28.6 average) and two touchdowns.

Penny has blistering football speed that makes him a threat to score on any carry, catch or return. He has been one of the more productive kick returners in the country over the past four seasons and has four straight years of positive kick return grades, a career average of 29.7 yards per return and seven career kick return touchdowns, a mark that tied the NCAA record. In 2017, Penny had 17 kick returns for 537 yards (31.6 average) and two touchdowns while he also returned two punts for 70 yards and one touchdown, showing he can help his NFL team in a number of ways.

Phillips is one of the more versatile players in the draft class. He started his career at Western Michigan at wide receiver and after one productive season, moved to defensive back where he had three straight years with positive coverage grades. As a returner, Phillips has four straight seasons of positive grades as a kick returner, two straight as a punt returner and he can change games in an instant. For his career, Phillips averaged 24.8 yards per kick return and had five kick return touchdowns and his career punt return numbers include a 10.3 yard average return and one touchdown. 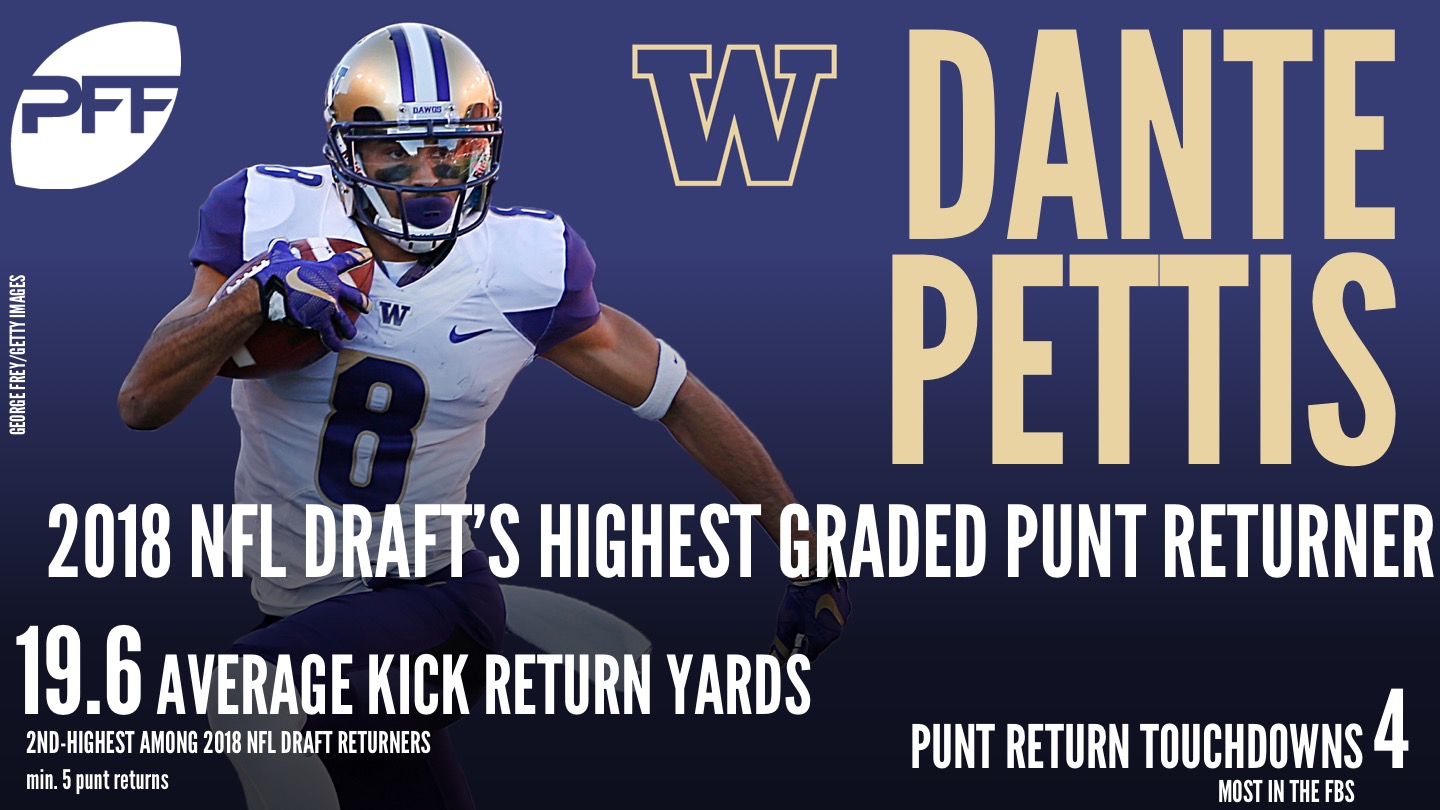 Pettis is one of the most prolific punt returners in college football history and has a NCAA record nine career punt returns for touchdowns. In 2017, Pettis averaged 19.6 yards per punt return, scored four touchdowns and finished with the highest punt return grade in the draft class. Pettis has returned at least one punt return for a touchdown all four years of his career at Washington as he offers speed, elusiveness and big-play ability both on offense and special teams. Returning punts may be the way he makes his biggest impact for his new team initially.

Stroman was a ballhawk in coverage for the Hokies’ defense last season with 13 combined interceptions and passes broken up. He is also a lethal punt returner, with the vision to weave through traffic at full speed and anticipate his path forward. In 2017, Stroman had a 10.6-yard punt return average and two touchdowns to go along with his four career punt return touchdowns. He was only asked to return kicks 23 times in college but averaged 20.2 yards per return.

Kirk is a dynamic athlete who does most of his damage as a slot receiver. However, he can also contribute as a deadly punt and kick returner and he returned both a punt and a kickoff for a touchdown in 2017. Kirk had 37 career punt returns for 824 yards (22.3 average) and six touchdowns, but his return grade was lower this year due to some ball security issues – a fumble against LSU, a muff against South Carolina and a kick return fumble against Alabama – but when he locks the ball away into his hands, he is a deadly returner who can score on any given play.

Punt return grade: tied at No. 63 in draft class

Chark is still a bit raw as a wide receiver but his speed impacts games and shows up on special teams. In 2017, Chark had two punt return touchdowns and an 8.7-yard average per return. His punt return grade would have ranked No. 18 in the draft class but his bowl game performance against Notre Dame, where two muffed punts in the rain caused him to tumble in the rankings. Chark also had a special teams tackle in the Senior Bowl, showing he can contribute as more than just a returner if needed.