TAMPA, FL - JANUARY 2: Defensive back Desmond King #14 of the Iowa Hawkeyes finds room to run on the punt return during the fourth quarter of the Outback Bowl NCAA college football game against the Florida Gators on January 2, 2017 at Raymond James Stadium in Tampa, Florida. (Photo by Brian Blanco/Getty Images)

The PFF Draft Daily will hit on a number of NFL Draft-related topics including recent news, scouting reports, PFF draft takes, and much more on a frequent basis.

Cornerbacks for every team

If your favorite team is looking for defensive help, particularly in the secondary, this is the draft for you. There are many positions that appear to be strong at the top and deep, including running back, tight end and edge defender, but this is a draft in which a secondary can be re-built with the variety of corners and safeties available in the early rounds.

The corners come in all shapes and sizes, from long, press corners like Washington’s Sidney Jones, Clemson’s Cordrea Tankersley and Alabama’s Marlon Humphrey, to playmakers like Florida’s Teez Tabor, to zone corners like Iowa’s Desmond King, to guys who can simply do it all like Ohio State’s Marshon Lattimore. There are plenty of slot options as well, particularly LSU’s Tre’Davious White and Michigan’s Jourdan Lewis, both players who are capable of playing on the outside with the coverage skills to kick inside.

With so much talent at the top, Florida’s Quincy Wilson and West Virginia’s Rasul Douglas may get overlooked, while Miami’s Corn Elder also provides good value beyond the first round.

Here’s a quick glance at the top of the cornerback class based on 2016 grades and stats. 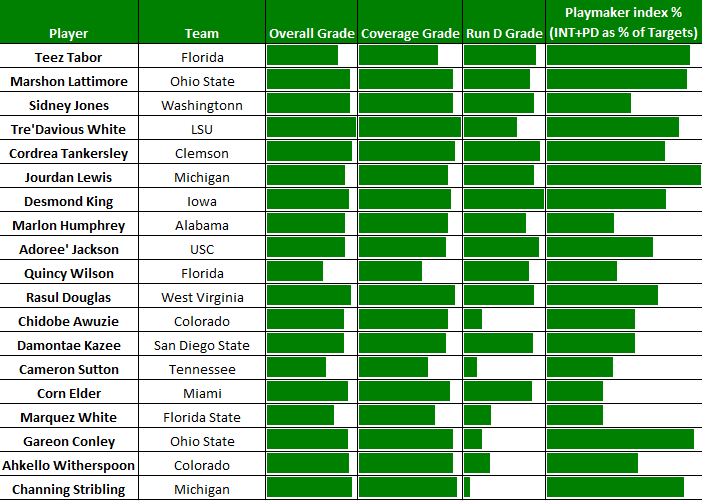 “I can’t believe DeAngelo Brown wasn’t invited to the Combine; he’s better than at least six interior DLs who will be there.”
@PFF_John pic.twitter.com/ne2Wi71tlD

ACC analyst John Breitenbach goes to bat for one of the better interior defensive linemen from the conference in Louisville’s DeAngelo Brown. It’s been three years of consistently strong play up front for Brown as he’s shown stout against the run, handling double teams and finishing plays, while flashing just enough as a pass-rusher. Brown has increased his snap count from 353 in 2014, to 595 in 2015, to 743 last season, all while keeping a solid overall grade in the low-80s. He provides a late-round nose tackle option and he’s one of the better players who was not invited to the NFL Combine. 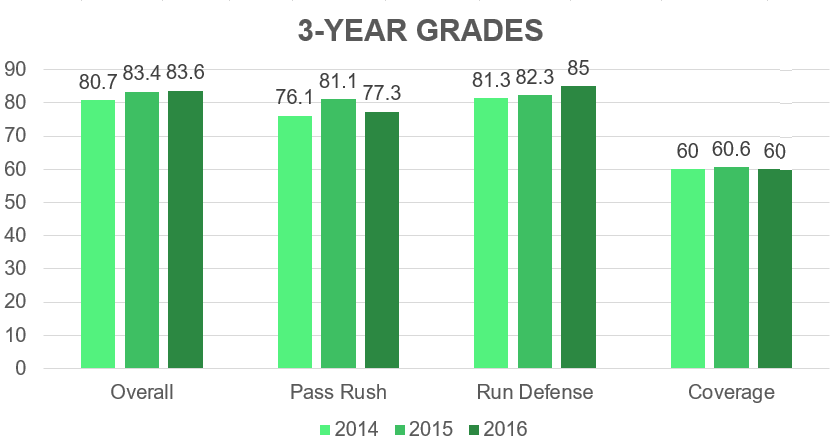 "Anticipates well on timing routes outside the numbers."

Here’s more on Watson and the other top quarterback prospects on PFF’s quarterback podcast, The Big-Time Throwcast:

We have a running document where PFF analysts list their favorite players to watch and analyze during draft season. They’re not necessarily the best players in the draft, but players an analyst believes in more than the hype surround the prospect or perhaps his expected draft position.

Everett is one of the more raw prospects to be entering this year’s draft, having spent his childhood on the basketball court rather than the football field. With that said, for the goodness of everybody who loves football, it's a good thing that he did eventually make his way onto the field, because his talent is undeniable. Even at 6-foot-4 and 240 pounds, Everett is nimble with the ball in his hands and is a nightmare to bring down, his 24 forced missed tackles this season were nine more than any other draft-eligible tight end. He also shows no fear for contact on tape, he's capable of hanging onto catches while taking a big hit and it's not uncommon for a defender to bounce off him while he retains his balance to gain more yardage after the catch. He's got a ways to go with his technique as both a blocker and route-runner, but we're scratching just beneath the surface with Everett right now, with some solid NFL coaching we could be looking at one of the better tight ends in all of football in the not-so-distant future.

This week’s PFF Draft Podcast features an overview of the important drills at the NFL Combine, a review of a top scouting term as well as a new one for your lexicon, and the usual hot take from my partner, Mike Renner. We also dive into two old scouting reports, give our risers and fallers for the week, and the award-winning segment – Nathan Jahnke’s mind-blowing stat of the week – will take the top off the defense in its usual fashion.

There will be more news this week about “PFF Draft Pass” which will feature the most unique NFL Draft insights in the land, including signature stats on the draft class and in-depth player profiles that tap into PFF’s database. Stay tuned for more information!