2022 NFL Draft: What press coverage performance means for Treylon Burks, Drake London and the rest of the WR class

It is true that wide receivers generally face more press coverage in the NFL, though the percentage of routes run against press coverage only jumps to 34% versus 25% for the college teams we track. Cooper Kupp, the NFL Offensive Player of the Year, was pressed on only a quarter of his routes.

While the concerns about the necessity of a top prospect being able to beat press coverage could be overblown, they’re not without merit. Replaceability is as much of a factor in draft value as usage, and a receiver who can beat press coverage is a rarer, necessary component of a successful passing game. It’s not surprising that the most coveted receivers selected in the first round of the NFL draft faced press coverage at a rate 10 percentage points higher than average in college.

Parsing how different usages and success rates against press coverage in college translate into NFL value is difficult, but separating press and “off” coverage routes provides some clarity. While we know some prospects didn’t face a lot of press coverage in college, can they still be successful in the NFL? The answer is yes, but a few other parameters matter just as much as usage, like how efficient a receiver is on press coverage routes and whether they won mostly on contested catches or creating separation.

To that end, I separated press and off coverage stats for all college prospects going back to 2017, when PFF began tracking press coverage for non-targeted receivers. I then divided the prospects into similarity-based groups and looked at how often different groups were favored in the draft, and how much early career value they added according to our PFF wins above replacement (WAR). In this analysis, I’ll focus specifically on wide receiver routes when facing press coverage. My next analysis will look at the same performance measures when facing off coverage.

To group receivers, I used k-means clustering, which allows you to choose the numbers of clusters and then divides the observations into that number of groups based on similarities in different features, in this the following rate stats against press coverage:

Feeding those four metrics over the final college seasons of more than a thousand college players into the k-means algorithm produces the following clusters. 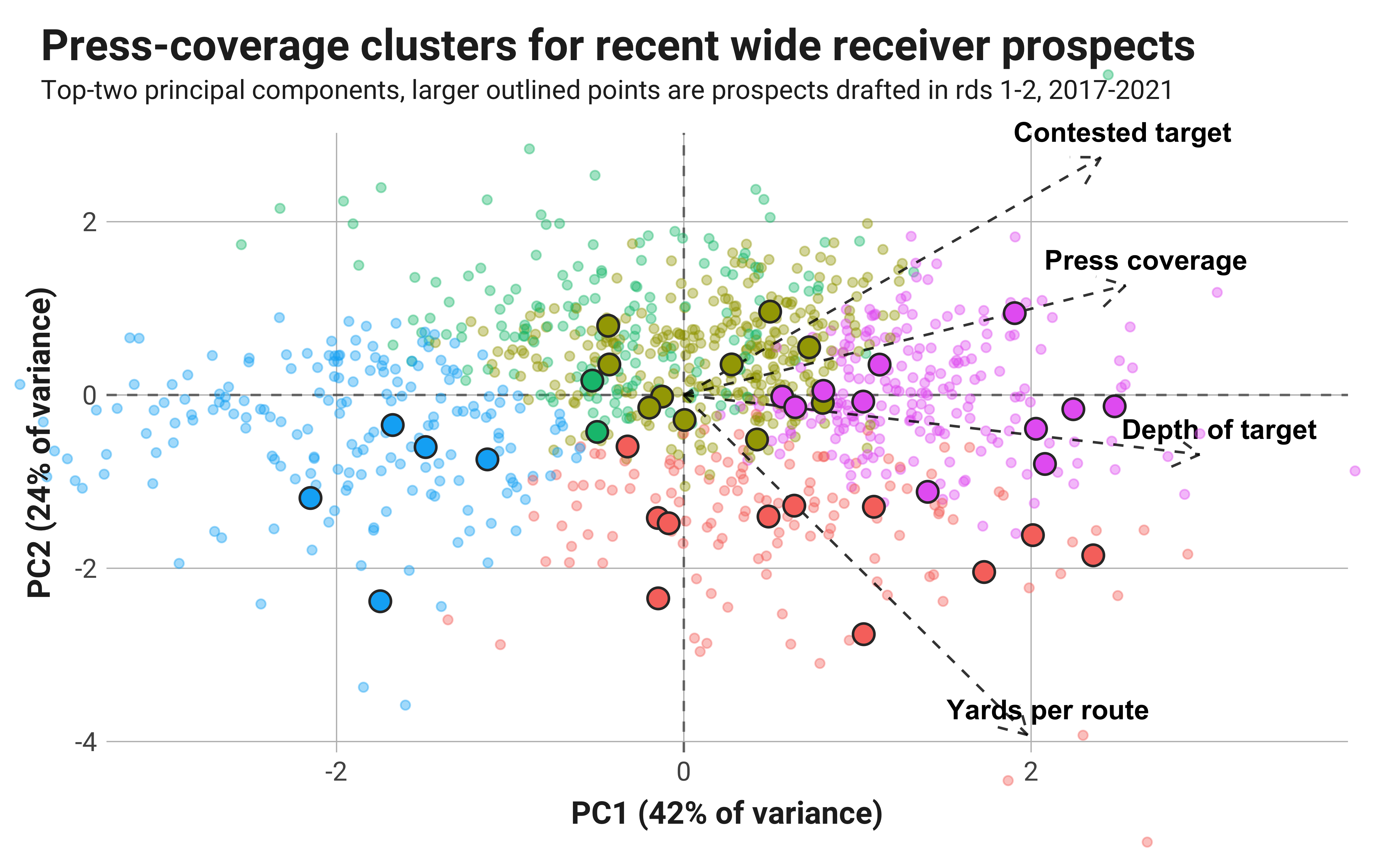 The five clusters are identified by different colors, and the larger data points represent prospects who were selected in the first two rounds of the NFL draft. The axes are the two main principal components used in clustering, which is a fancy way of saying a mix of the different features in the best way possible for differentiation. The additional dashed arrows represent the directionality of each feature in the model — i.e., more efficient receivers against press coverage are further down and to the right. Those with greater average depths of target drift directly right, and those who faced more press coverage generally and had more contested press targets are up and to the right.

While all the traits are somewhat related due to their similar horizontal directionality, the percentage of contested press targets for prospects is more related to how often a receiver is pressed than how efficient they were when pressed according to yards per route run.

Looking at the mean numbers for the five clusters, whose numbers are assigned randomly by algorithm, you get an idea of what types of receivers fall into each cluster.

Cluster 1 is the smallest of the bunch, featuring the highest averages for yards per route run facing press coverage, depth of target and percentage of prospects drafted in the first two rounds. However, it ranks a distant third in how often they faced press coverage. The prospects in Cluster 5 were slightly less efficient on average against press but faced the highest rate of press coverage.

Now that you have an idea of what types of receivers comprise the clusters, let’s look specifically into each one in the order above and inspect the relevant prospects of the 2022 wide receiver draft class to see what the results tell us about their potential for success in the NFL. 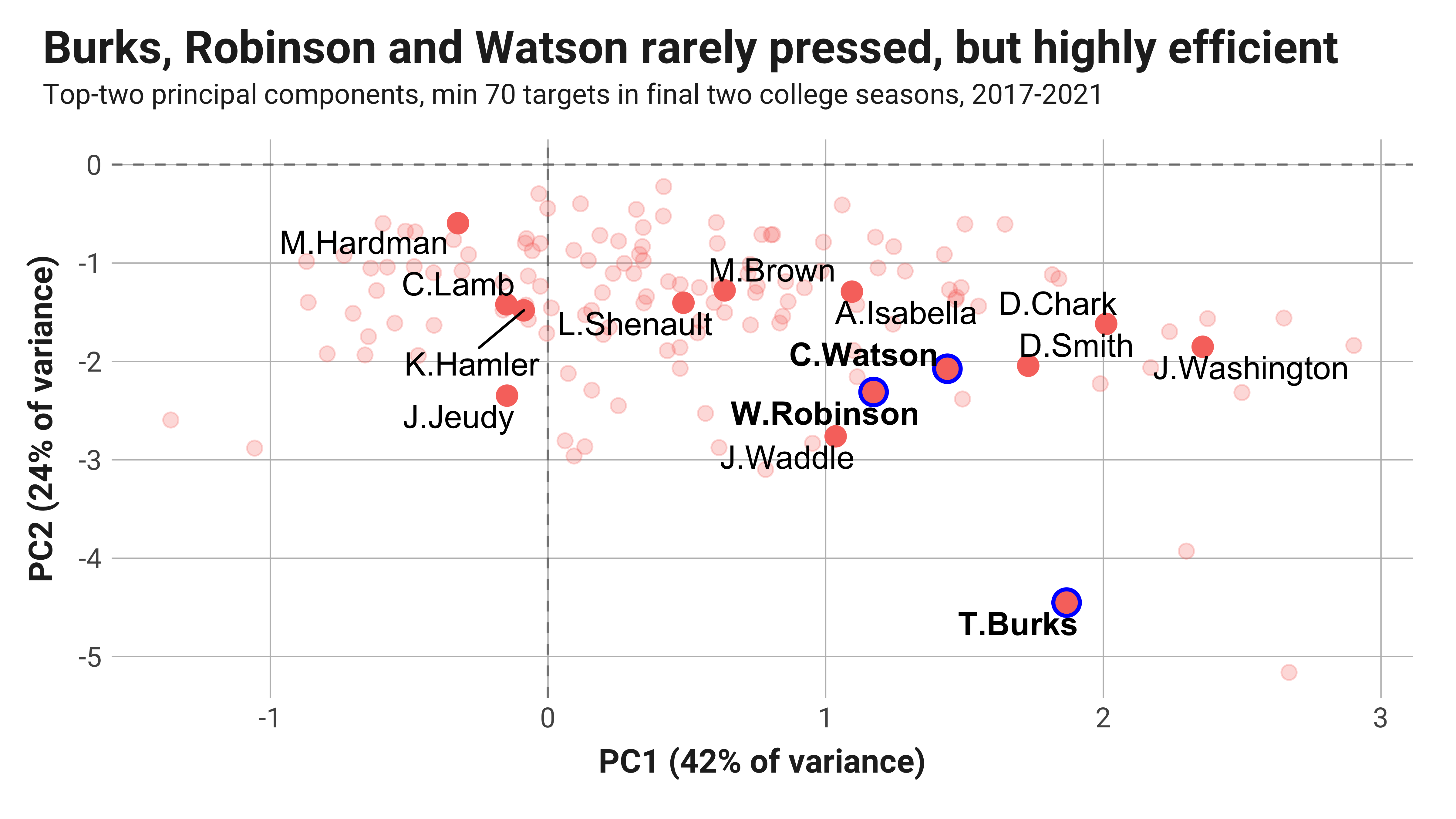