2022 NFL Draft: A look into how NFL teams spent their draft capital

Las Vegas, NV, USA; Michigan defensive end Aidan Hutchinson after being selected as the second overall pick to the Detroit Lions during the first round of the 2022 NFL Draft at the NFL Draft Theater. Mandatory Credit: Kirby Lee-USA TODAY Sports

With the 2022 NFL Draft over, we can finally start our annual review of how things went for all 32 NFL teams. So, in this article, we want to look at how teams allocated draft capital to various positions.

There were some superlatives this year, as 2022 marked the first time in draft history that two cornerbacks were selected inside the top four. The fact that three edge rushers were also selected within the top five is pretty extraordinary, as well.

Naturally, when two positions get picked early, other positions fall. And this was especially true for quarterbacks this year, as teams spent much less on the QB position in 2022 than they have in every year since 2006 — and that includes the weak 2013 QB class.

First of all, let’s look at how the amount of draft capital allocated to each position has changed since 2006. 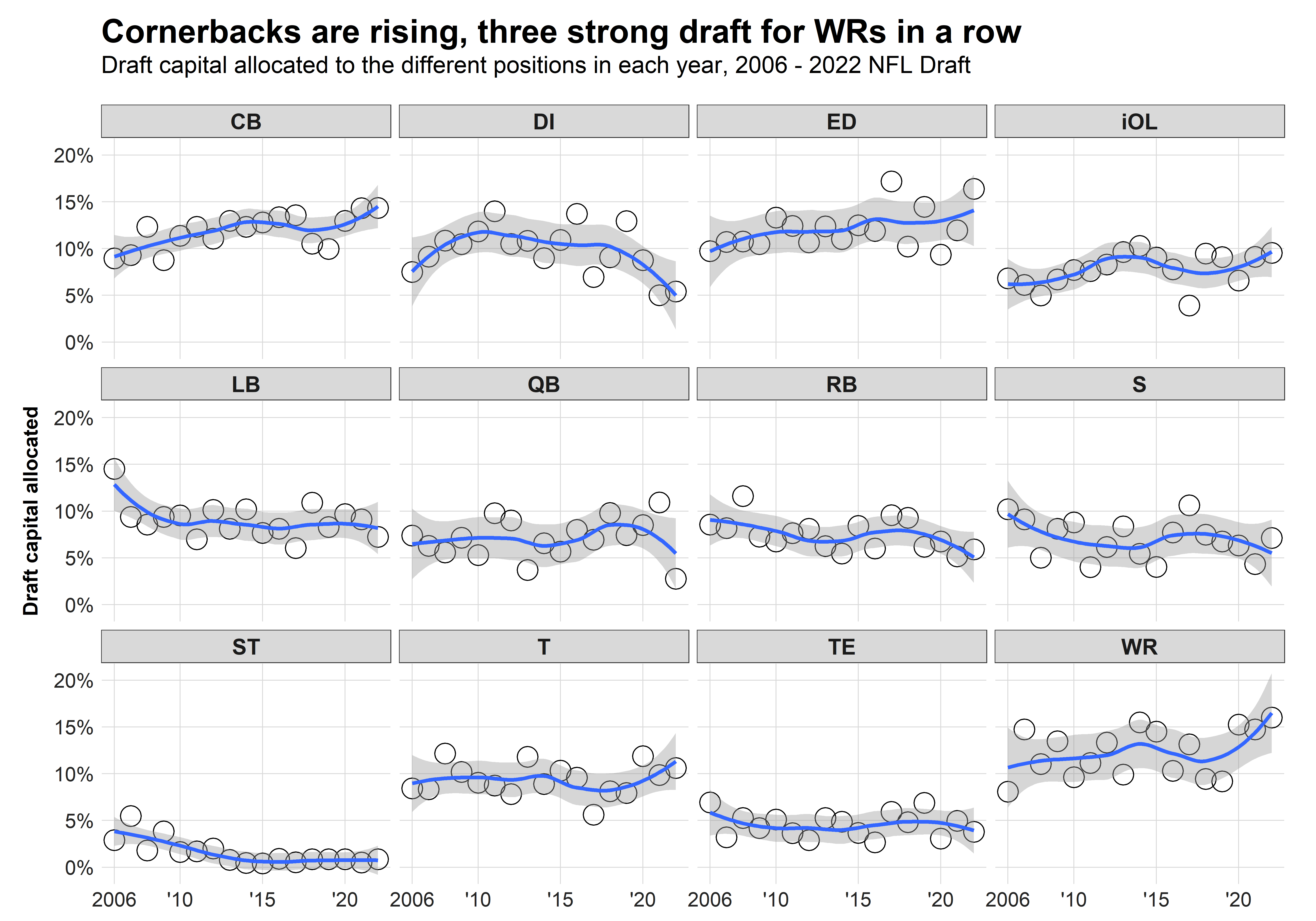 For most positions, there isn’t a strong trend. The variance from year to year is caused by the different strengths of the respective classes, but the increased importance of the cornerback position over the last 15 years certainly sticks out.

Another prevalent trend stems from the last three wide receiver classes, as teams have never spent as much draft capital on WRs in a three-year span as from 2020 through 2022.

Another data point that sticks out is the recent weakness of interior defender classes. The next class will show whether this was an artifact of just the last two years or whether we are seeing a trend.

Let's take a deeper look at when players of each position were drafted this year compared to previous drafts and how they were ranked on Arif Hasan’s consensus big board.

The 2022 quarterback slide has been long discussed by now. The chart below shows us how late they’ve been drafted compared to the consensus big board but also compared to the minimum number of quarterbacks taken in previous drafts. 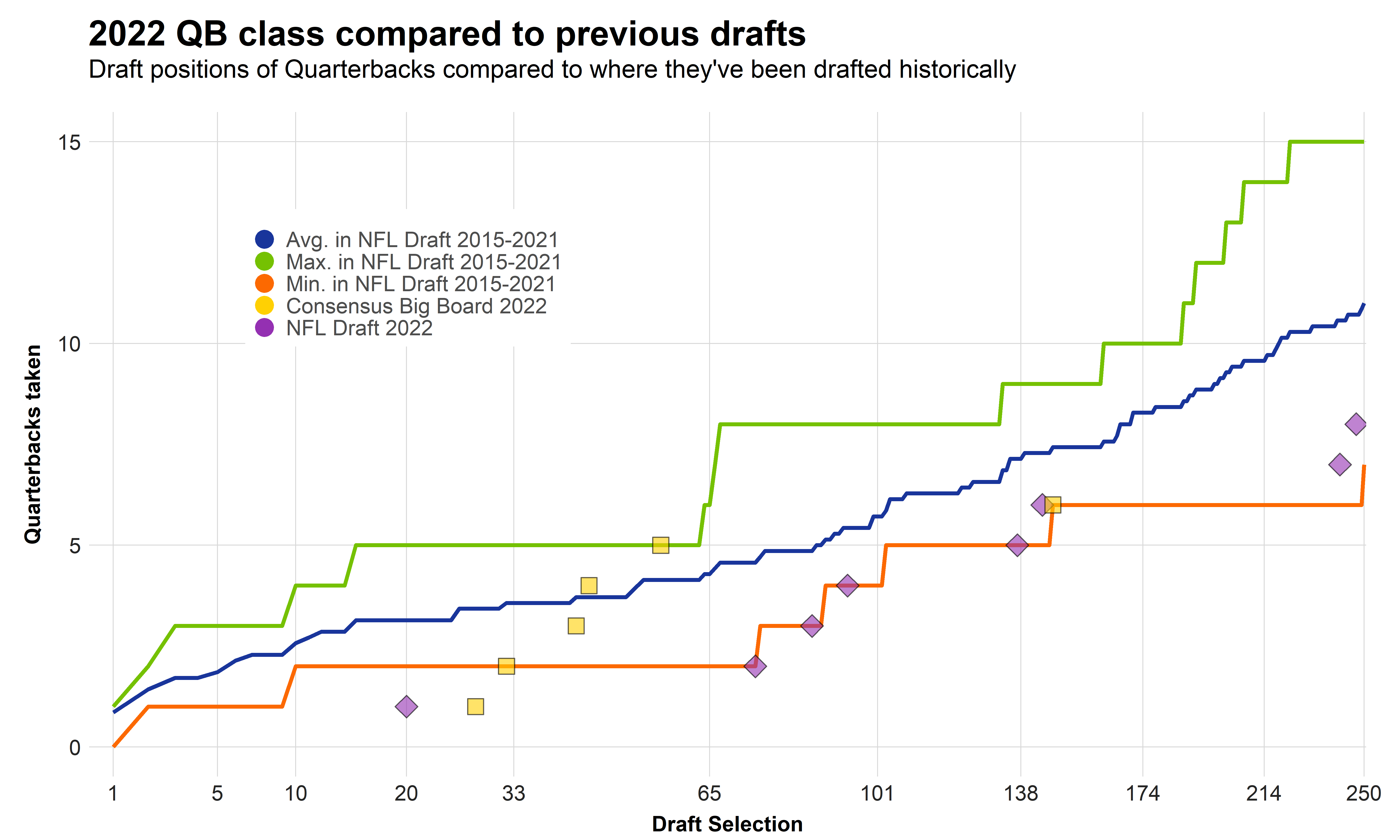 During the draft process, it didn’t look as though teams would draft the receiver position earlier and more often than in recent years, but the run on wideouts on draft day was much greater than we thought. When all was said and done, more receivers were taken in the top 20 and top 60 than in any draft since 2015. 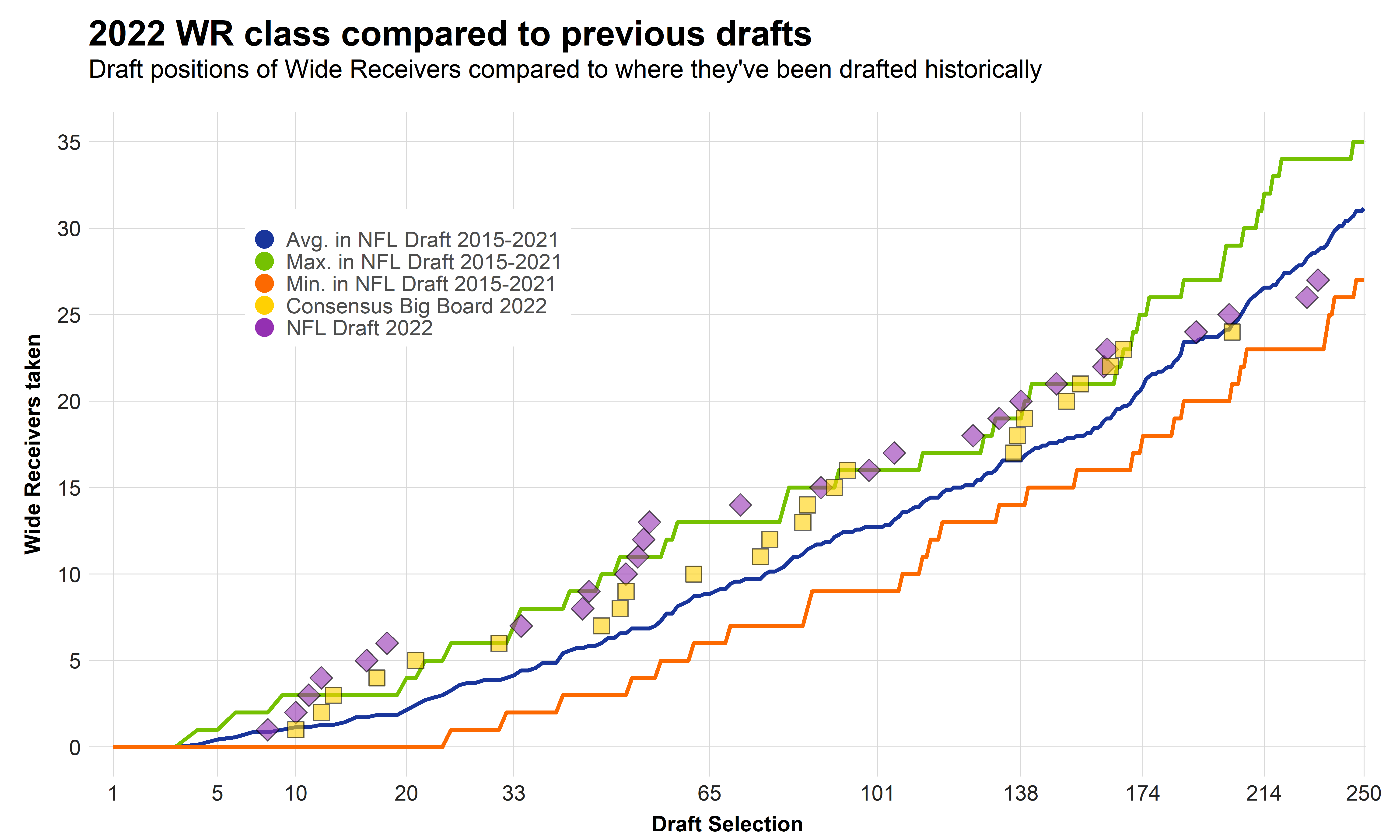 The consensus big board perfectly predicted the selection of the first four running backs. Just a handful of running backs were selected on Day 2, and a huge run on the position followed on Day 3.

Plenty of backs going off the board on Day 3 could become the new norm in the coming years. 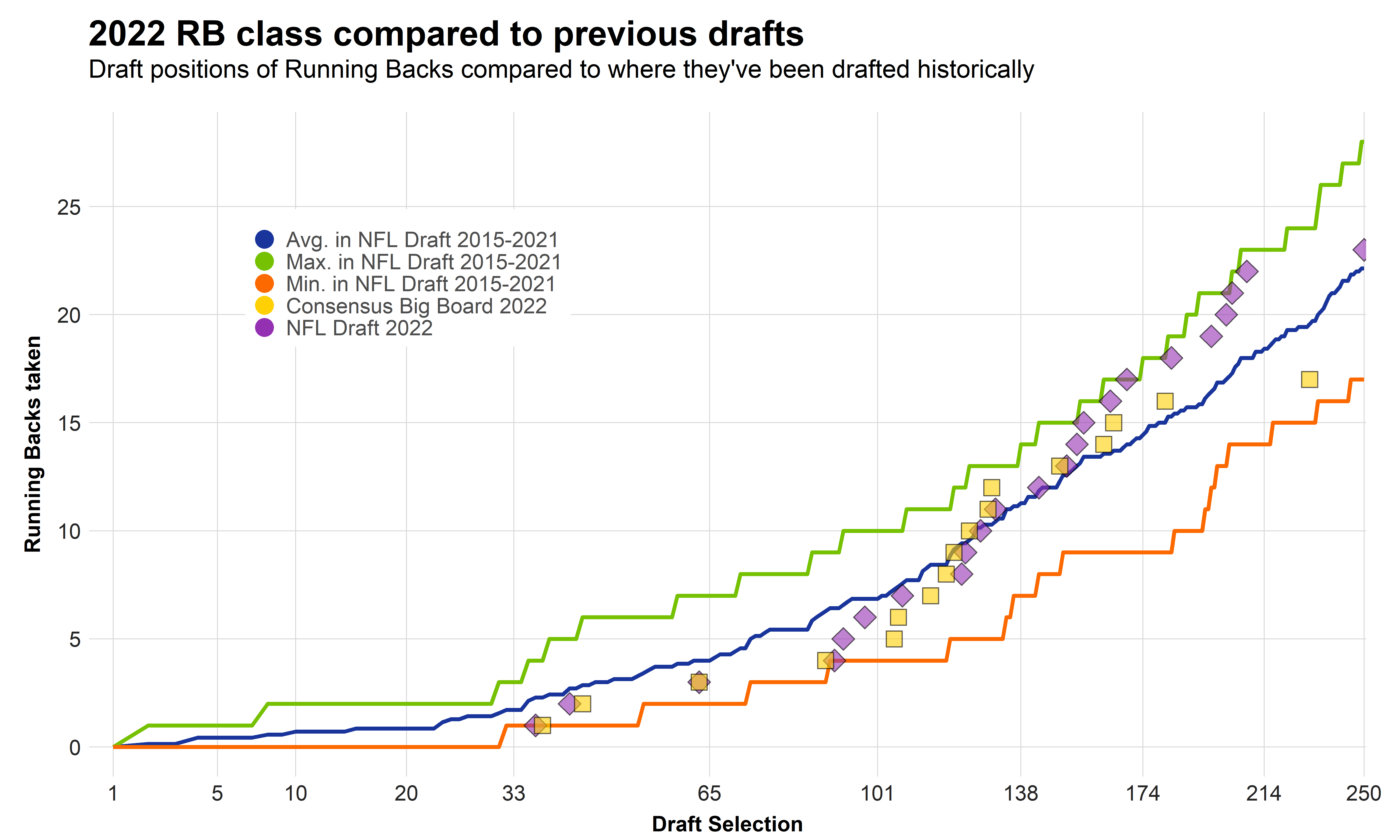 The look into tight ends looks almost the same as for running backs, as the first few selections coincided with the expectation. Teams then targeted the position much more than anticipated on Day 3. 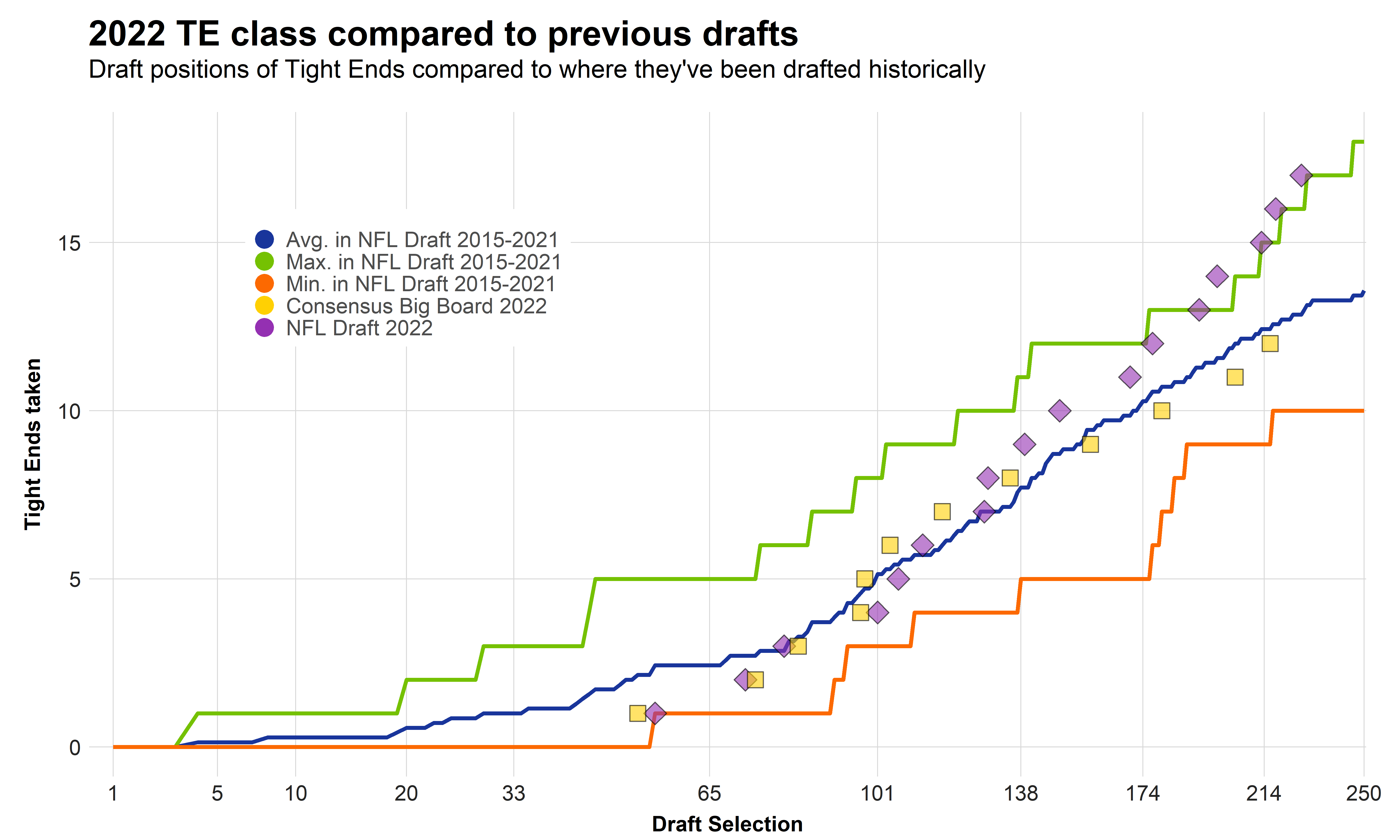 The offensive tackle class was billed as historically good, but not a single player at the position went off the board between the 24th and 69th pick. In terms of draft positions, this was a much more ordinary class than we thought. 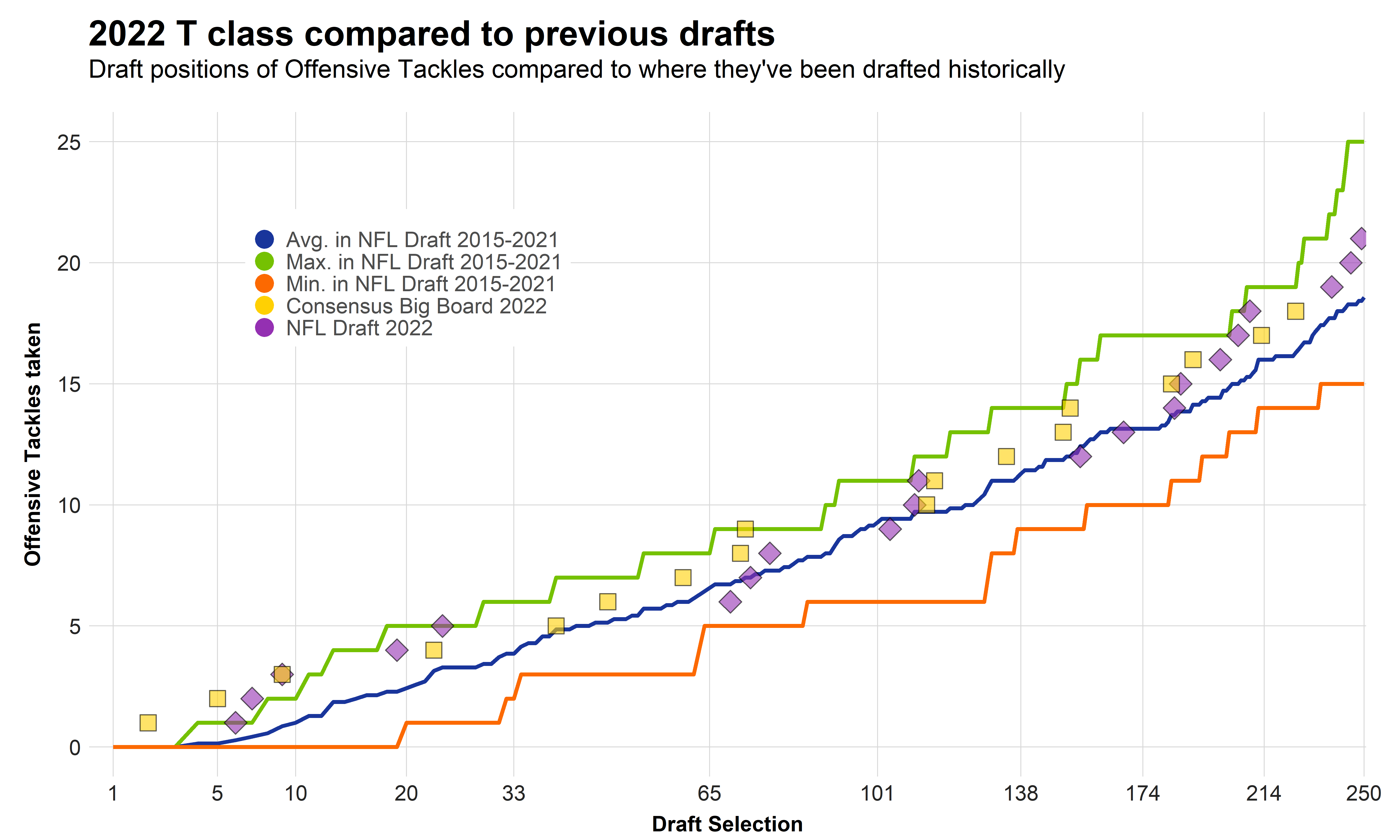 The consensus big board didn’t anticipate the shift from the outside to the interior. 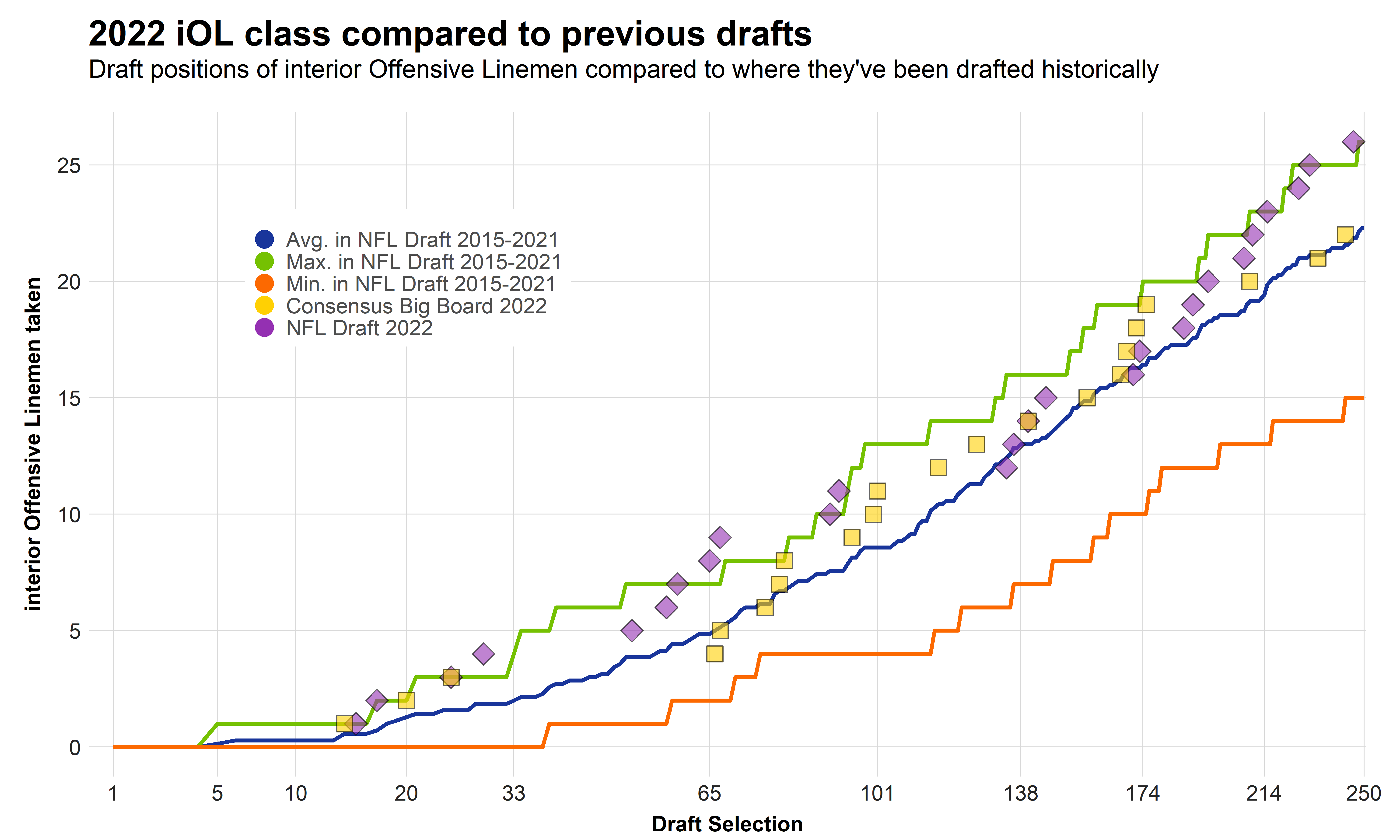 This class of edge rushers was supposed to be very strong, and with the exception of Jermaine Johnson II and George Karlaftis falling to the end of the first round rather than being selected in the middle of the first round, the expectations were met. 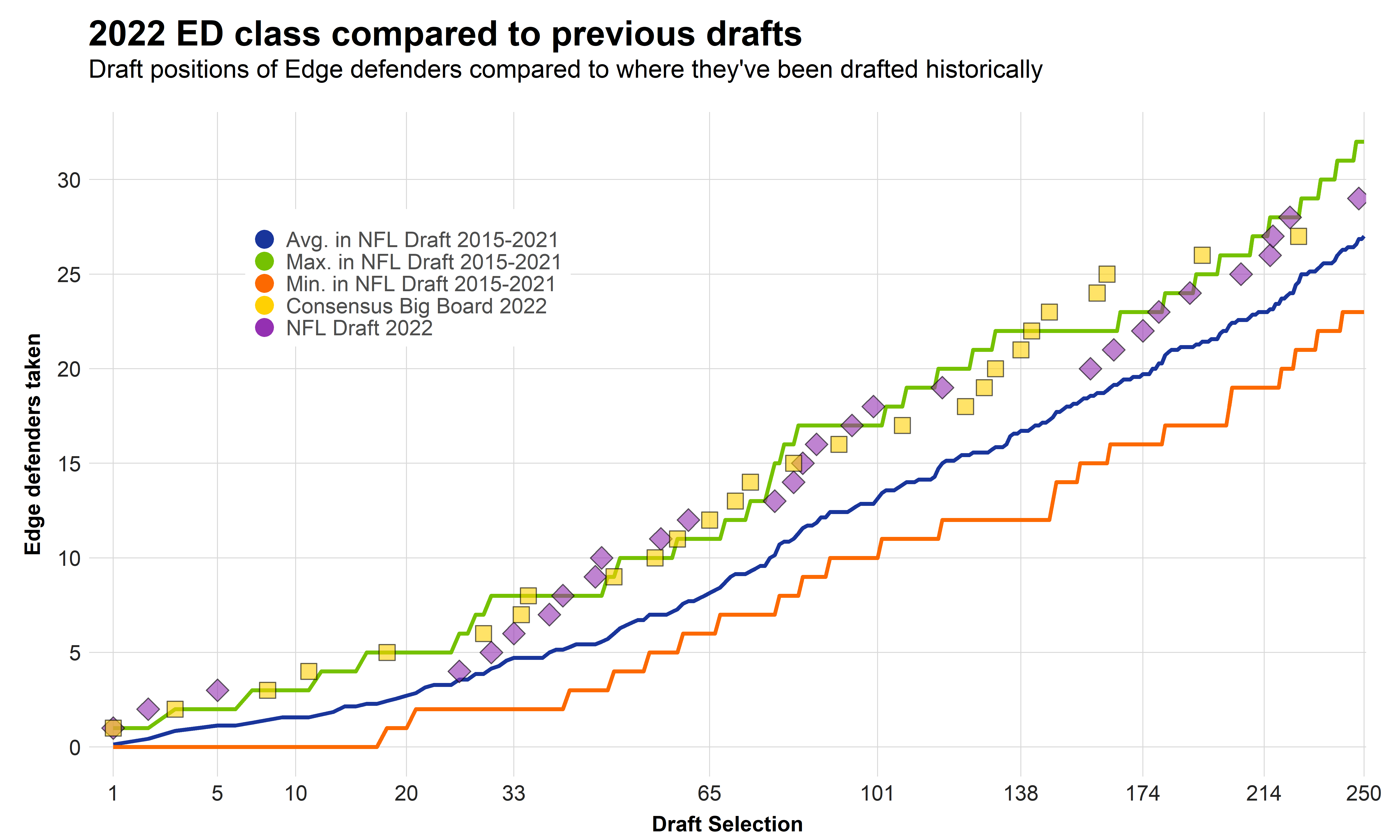 The class of interior defenders wasn’t supposed to be very strong, and other than taking a lot of flyers in the fifth round and later, NFL teams agreed with that assessment. 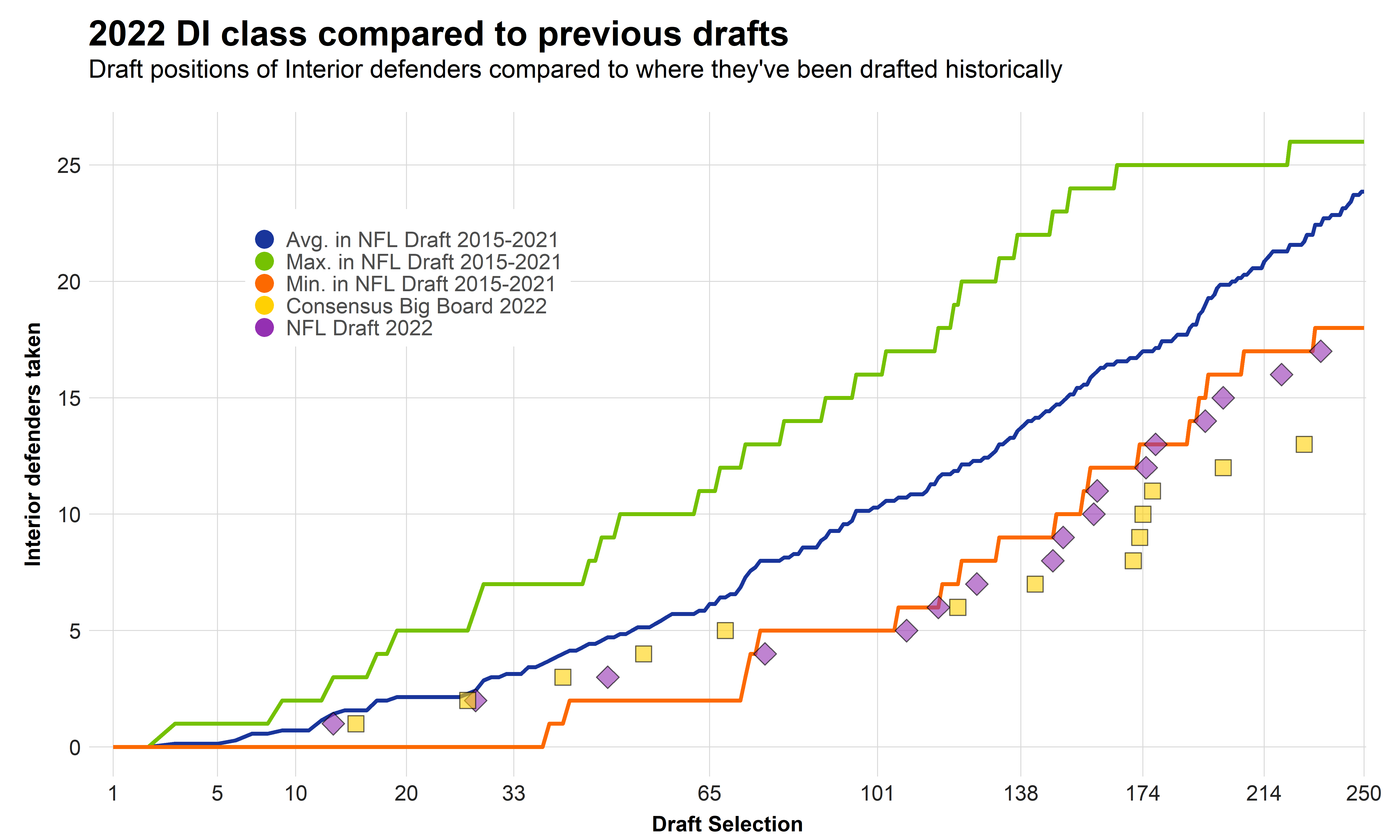 The Day 2 run on linebackers came as anticipated, but it was shifted by a few picks. 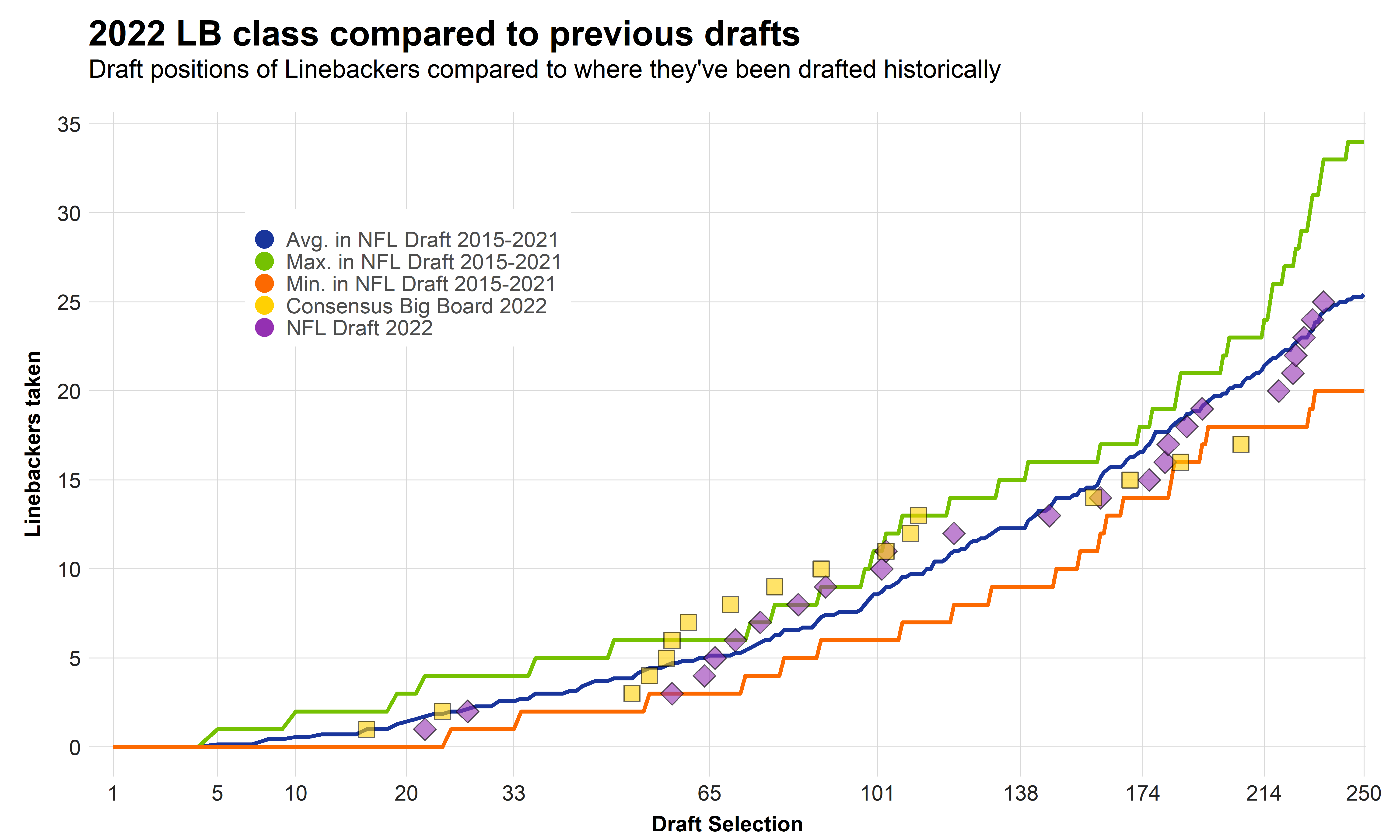 You can’t have enough players who can cover. The NFL adopted this saying and drafted more cornerbacks than in any other draft since 2015. 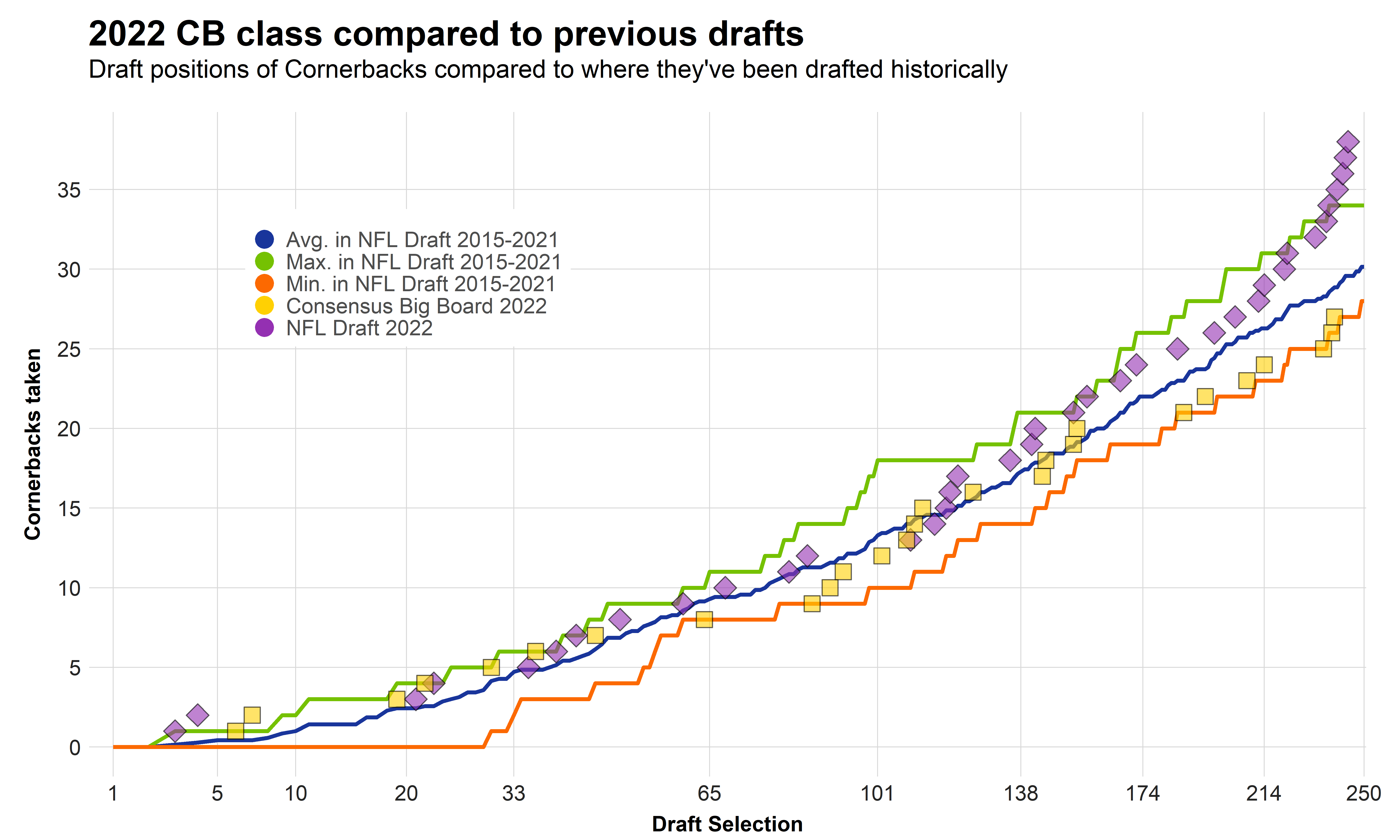 After recent drafts heavily devalued safeties, this was a strong year for them, with three first-round picks and a solid number of them going off the board on Day 2. 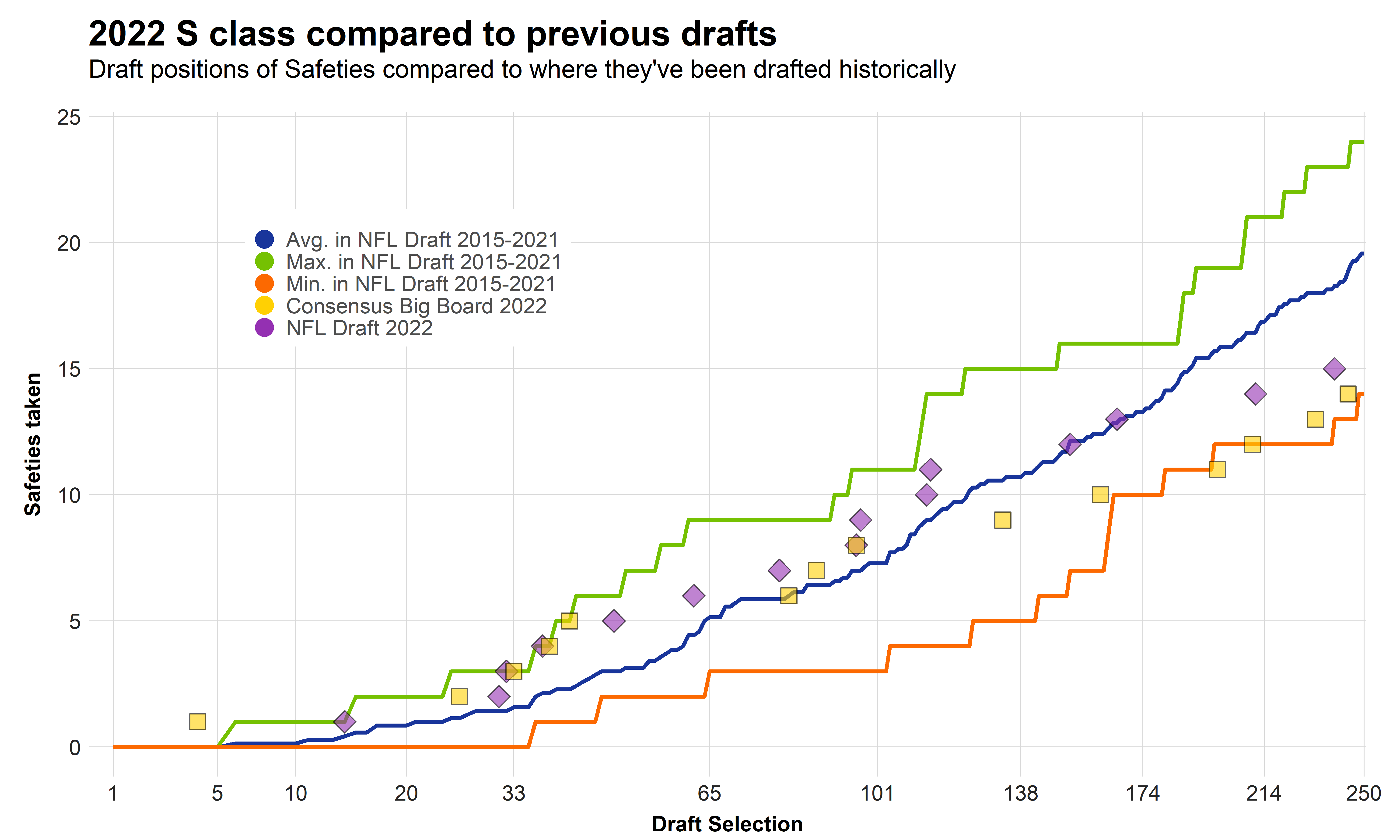