2021 NFL Draft Comps: Could Rhamondre Stevenson be the next Arian Foster?

The comps below were derived from a two-step process. First, I converted all the most statistically relevant stats and measurables to percentiles based on the thousands of prospects who have entered the NFL since 2006 at each position. Then, I filtered the total universe of past prospects by those who had draft positions, weight and 40 times within a 10th percentile in either direction of Rhamondre Stevenson. For undrafted players, I assigned a numerical draft position of 300.

For Stevenson's draft position, I’m using an estimate based on the mock data collected at GrindingTheMocks.com. For weight and 40 time, I’m using the numbers from his pro day, with a 0.03-second penalty added to the 40 time to reflect the uncertainty of pro-day timed measurements.

Stevenson put up solid numbers at his recent pro day, slimming down to 230 pounds and posting a 4.62-second 40-yard dash. The three-cone drill is not part of this analysis due to a lack of historical data, but we should note that Stevenson had a stellar time for his size at 7.02 seconds. 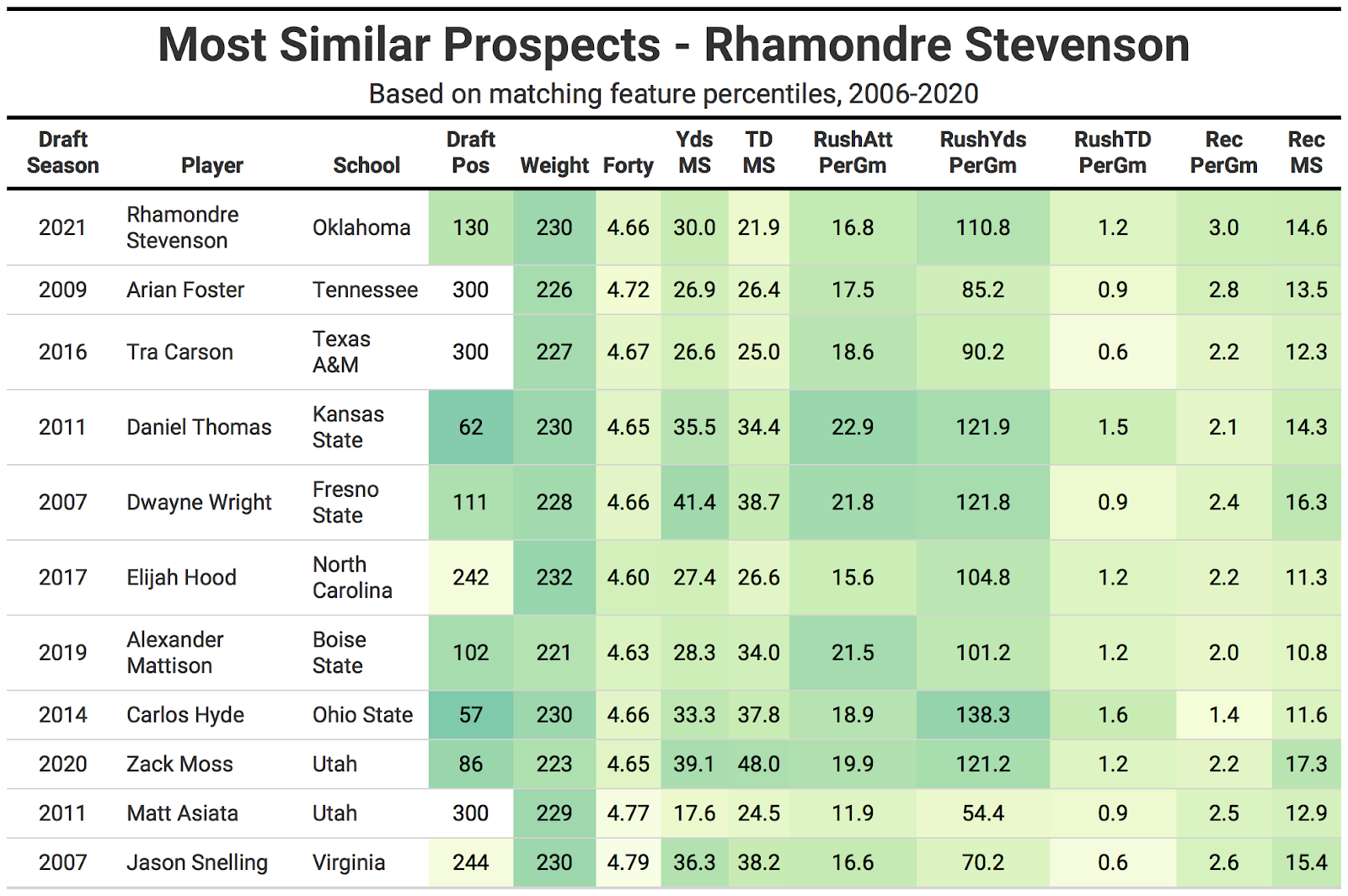 The fact that Arian Foster is Stevenson’s top comp probably says more about how poor a prospect Foster was than the realistic upside for Stevenson. That said, the Oklahoma product possesses all the tools of a successful NFL back, including size, functional speed and strong receiving numbers.

Stevenson’s receiving volume of three catches per game and receiving market share at nearly 15% are both top-notch numbers for any running back, let alone one weighing in at 230 pounds.

Beyond Foster, there aren’t many successful comps for Stevenson, especially among those who were drafted on Day 3 or were UDFAs. 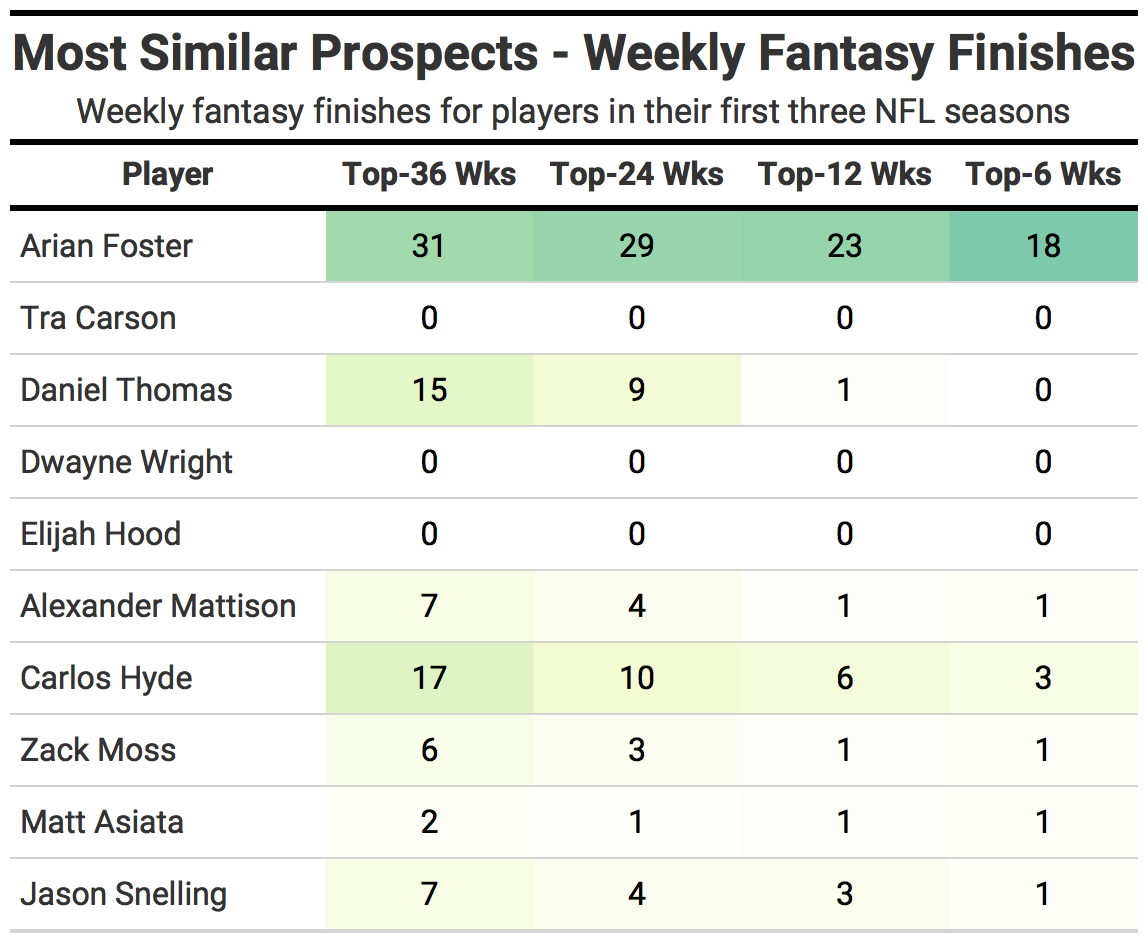 Even if you lived through the era he dominated, it’s still wild to see the fantasy numbers Foster put up during his early career. For players drafted since 2006, Foster is tied with Chris Johnson for the second-most top-six fantasy weeks in his first three seasons, an incredible feat for an undrafted player (Christian McCaffrey was first with 22).

Carlos Hyde and, to a lesser extent, Daniel Thomas are the other comps with modest fantasy production in their early careers. Unsurprisingly, they’re also the two comps drafted in the second round. As of now, Stevenson looks like a Day 3 pick, putting a damper on expectations.

Looking only at Stevenson’s closest comparable players who played in the PFF College era (2014-2020), we can see how Stevenson stacks up with his percentiles for rushing grade, receiving grade and other advanced stats like forced missed tackle rate and yards after contact. These stats are all from the prospects’ final seasons. 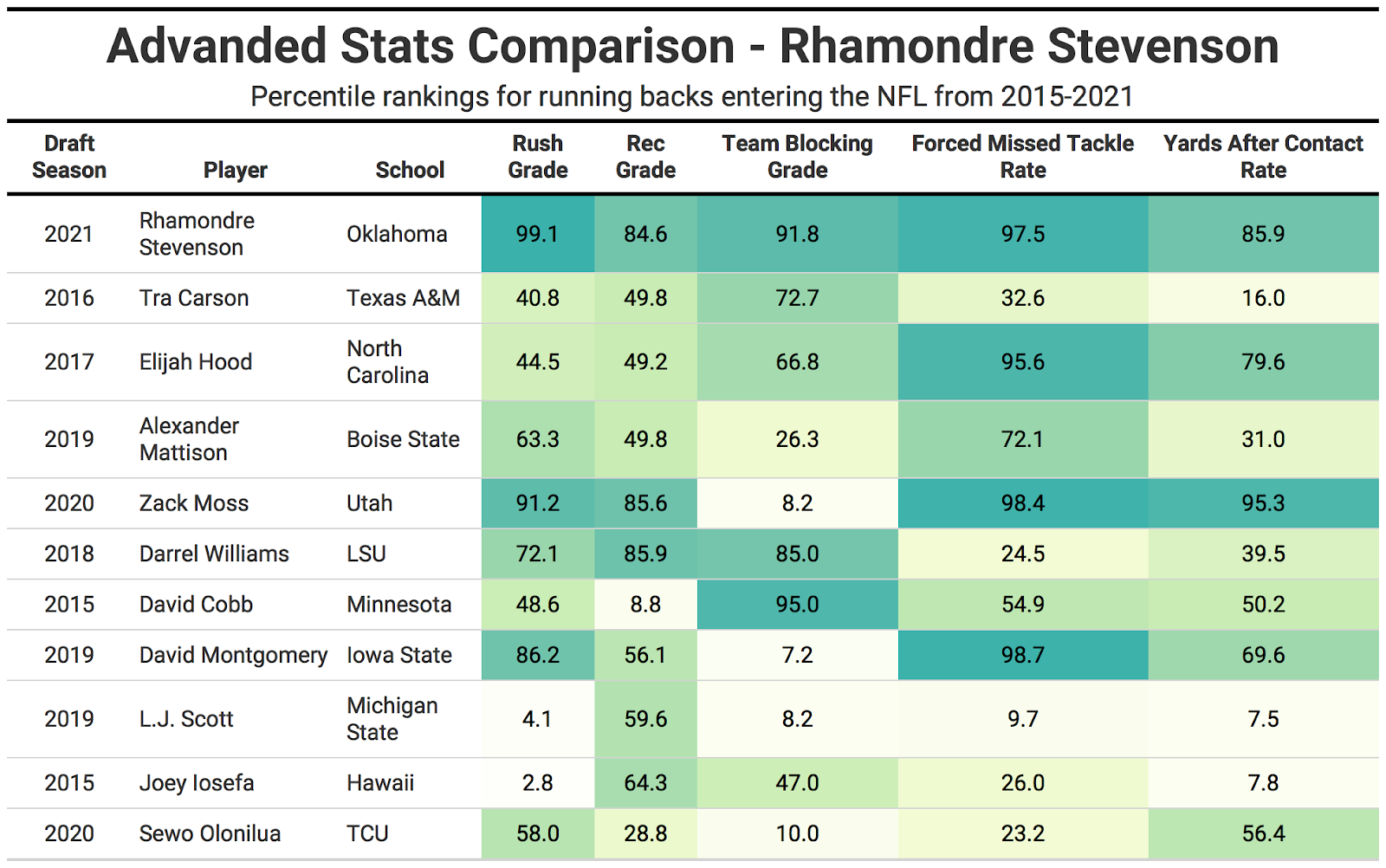 We added a couple of other names to this list that wouldn’t have made the top 10 going off the list above but would have been on an extended comparable player list.

Stevenson is extremely well-rounded, according to our advanced stat percentiles, with a top-notch rushing grade and a strong receiving grade. He was elite in his ability to force missed tackles and generate yards after contact, as well.

A caveat applies to Stevenson — and most of the 2021 class — as he has a limited final-season sample to base the numbers upon. Still, Stevenson did crack 100 rushing attempts in the six games he played in 2020.

The closest comp to Stevenson when only accounting for advanced stats is Zack Moss, who also excelled in all categories. Unlike Moss, Stevenson had outstanding run blocking at Oklahoma, which could have inflated his production and efficiency at 7.2 yards per carry. Stevenson was known as a patient runner in a style similar to another of Stevenson’s distant size/speed comps: Le’Veon Bell. Bell was a top-20, not top-10, comparable prospect to Stevenson.

Stevenson is the RB11 on the PFF big board at 165 overall — 35 spots below his expected draft position based on recent mock drafts. I’ll be watching intently to see if he can creep into Day 2 of the NFL draft and find a landing spot with blocking conducive to his patient style. Stevenson has the well-rounded skills a running needs to thrive in today’s NFL if both fall into place.