After Ohio State's Chase Young, there are some serious question marks in this edge class. There are a lot of guys with unique physical tools, but very few had consistently superior production, and because of that, this looks like one of the weaker edge classes in recent memory. However, that scarcity should only serve to push these guys up draft boards, as the need for pass-rush is still massive for many teams around the league.

[Editor's Note: PFF's 2020 NFL Draft Guide is LIVE and available to all EDGE and ELITE subscribers. Download your copy today!]

Young is quite easily the best edge prospect we've ever graded. He shattered the single-season PFF pass-rushing grade record with a mark of 96.5 in 2019. There's not a single thing about the position he's not elite at as a prospect. Truthfully, coming up with any sort of negatives about him just seems like nitpicking. Draft him, and you've got a top-10 edge in the NFL sooner rather than later.

Epenesa has been balling for the Hawkeyes ever since he earned a 78.8 pass-rushing grade on 326 snaps as a true freshman in 2017. He has a surprising amount of bend for a player his size and can win in a number of different ways. Chiefly among them is his bull-rush, which figures to be his calling card at the NFL level. Epenesa is a consistent pocket pusher who can play the run from virtually any alignment. Teams that covet versatile edge defenders should have Epenesa rated highly.

The biggest question that surrounds Epenesa is this: Why was a 6-foot-5, 280-pounder with immense physical tools rarely so dominant? Only his game against Minnesota this season earned a grade higher than 80.0. It's also concerning, to say the least, that his grade took a healthy drop on a full-time workload this past season — he went from 90.1 overall on 412 snaps in 2018 to 85.5 overall on 767 snaps this year. In a fairly weak edge class, though, don't expect Epenesa to last long. 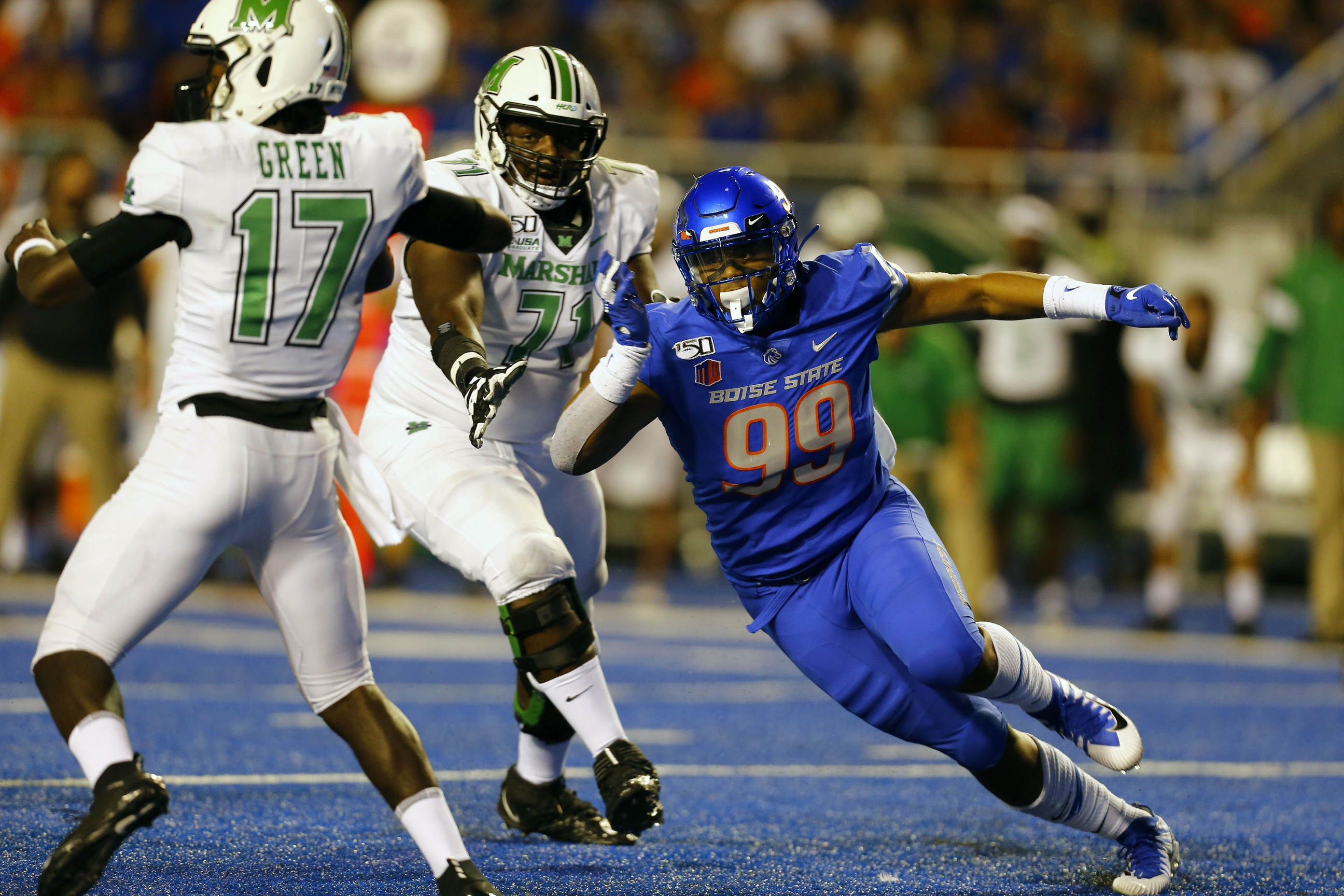 Weaver is a PFF favorite for what he's done as a pass-rusher in his time at Boise State. He produced 20 or more combined sacks and hits in each of his three seasons with the Broncos and is the only edge we've graded to have back-to-back pass-rushing grades over 92.0. His hands are right up there with Chase Young's for some of the best in this class, and his best work often came as an interior rusher on third downs (although he wasn't deployed often in that role).

The worry with Weaver is his athleticism (or lack thereof). He doesn't fit the ideal physical profile for the position, and given that he beat up on Group of 5 tackles for the most part, it's only going to bring up more questions as to whether his production can translate to the NFL. We've never seen any non-Power 5 defender dominate to the degree Weaver has, though, so we'll bank on that proficiency continuing.

Okwara is a certified freak athlete who looks as comfortable in coverage as he does rushing the passer. The Notre Dame edge defender may be undersized, but that didn't stop him from being one of the best bull-rushers in the country. He converts speed to power about as well as anyone in this draft class, as he's very flexible for a 6-foot-5 edge defender. It all led to a 90.4 pass-rushing grade before his year was cut short with injury.

The worrisome thing is that he only had three total pressures on 43 pass-rushing snaps against Mekhi Becton and Andrew Thomas this season. He was also fairly hot and cold this past year, with two or fewer pressures in five of the nine games he played in last year. Okwara usually needs a head of steam to work his moves and could be seen as a designated pass-rusher only at the next level. 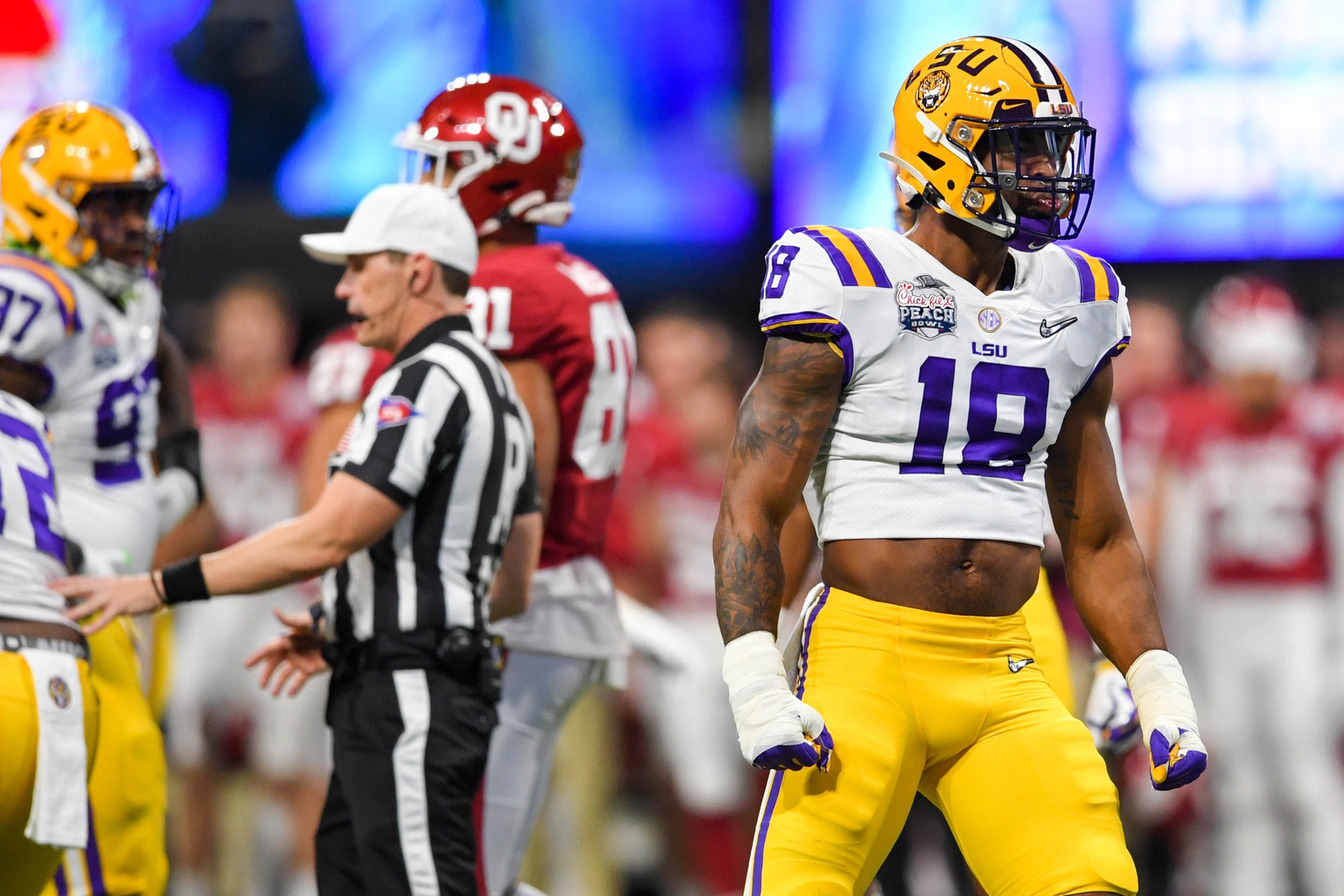 Chaisson is right up there with Julian Okwara in the conversation for the most athletic edge in the class. He moves like he could flip over to tight end tomorrow and still be a top prospect at 6-foot-4, 250 pounds. He's also one of the more confounding evaluations in this class. Chaisson has reps on tape against the likes of Texas' Samuel Cosmi, Georgia's Andrew Thomas and Clemson's Jack Carman that are freaky in nature, but he didn't earn a pass-rushing grade above 80.0 in any single game in his career. Those flashes will tempt some into thinking that they will happen once again in the NFL, but the lack of consistent dominance doesn't quite jive.

Taylor looked like a man possessed down the stretch in SEC play this season, and he actually led all edge defenders with an 84.9 pass-rushing grade against the SEC in 2019. The Tennessee product finished with multiple pressures in each of his last eight games of the season.

Taylor packs some power into his 255-pound frame. He has also shown a consistent ability to get to the edge and move back toward the quarterback. However, it's a little scary that he almost exclusively went up against right tackles. Winning the edge is much easier against what's traditionally the much “weaker” tackle at the college level.

The back end of NFL rosters are filled with undersized edge defenders who dominated in college but were rendered ineffective in the NFL. You can get by against unathletic college tackles by simply being quicker than they are, but you simply need more ways to win once you get to the league. That's obviously concerning for a 241-pounder like Uche, but there are a couple of key reasons why Uche could be a guy who bucks the trend.

The first is that he has legitimately walked back offensive tackles via the bull-rush, most notably a rep against Tristan Wirfs in the Iowa game and Matt Peart at the Senior Bowl. The second is that the majority of his production at Michigan, in obvious pass-rushing situations, came as a stand-up rusher on the interior. His ability to win with his hands against guards and centers was incredibly impressive. With 46 pressures on only 206 pass-rushing snaps, I'd bet on Uche being an undersized outlier.

Gross-Matos was one of the most consistent edge defenders in the country this past season, with eight of his 12 games earning a pass-rushing grade of 70.0 or higher. None topped the 78.7 mark, however, as Gross-Matos didn't have many dominant outings. He's got some serious pop in his hands and an ideal NFL build.

However, the true junior is still nailing down the finer points of rushing the passer. It often looks as if he's decided what move he's going to do before the snap and struggles to play off the opposing offensive tackle. His bull-rush wasn't nearly as deadly as you'd think it would be with his power and length. It's encouraging that he took a big step forward from a 67.7 pass-rushing grade in 2018 to 81.8 this past season, but he's still got a ways to go.

Willekes was one of the most dominant edge defenders in the country back in 2018 when he earned a 90.1 run-defense grade and 86.2 pass-rushing grade for the Spartans. After breaking his leg in their bowl game last season, Willekes didn’t quite come back as the same player. He’s still one of the most flexible defensive ends in this class with an unparalleled ability to play with leverage. He was also a straight iron man for the Michigan State, playing over 750 snaps each of the past two seasons. He’s never going to “wow,” but he’ll be a solid contributor in the league.

Lewis has the height (6-foot-5), size (258 pounds), and length (34 ⅛-inch arms) that you want on the edge. Unfortunately, his production doesn't quite match the elite physical profile. Lewis earned a solid 85.8 pass-rushing grade this past season and had a middling 57% win rate in the one-on-ones at the Senior Bowl. It was a good bounce-back year after missing all of 2018 with a knee injury, but it's still far from what we normally look for production-wise in the first round. Lewis is a long-arm specialist who works most of his moves off the bull-rush. That's a good starting point for a man with his length.