The preseason 2021 NFL Draft Guide is officially live here on PFF.com. With 228 pages of draft goodness, I’m fairly certain not everyone is going to have the time to read every word. That’s what I’m here for. After poring over these prospects all summer, here are the 10 most interesting takeaways that I found when putting together the guide.

1. The box score stats may not say it, but Justin Fields vastly outperformed Dwayne Haskins in the same offense

Even though Haskins went for nearly 1,600 more yards and seven more passing touchdowns in his final year at Ohio State than Fields did in 2019, the grading says that Fields played at a far higher level. Fields finished the season with a 92.4 passing grade with only a few blips on the radar compared to an 84.9 mark for Haskins.

One primary reason why is that Fields did far more of the work for his yardage. His average depth of target was over 2 yards deeper than that of Haskins' even though Haskins had the benefit of a talent like Terry McLaurin on the outside. The only real difference was opportunity, as Fields buried teams so consistently on 179 fewer passing attempts on the season. As such, we see Fields as a top-two prospect, whereas Haskins was further down our board.

This doesn’t technically apply to every edge prospect, as the undersized Chris Rumph II and Quincy Roche put up elite grades at Duke and Temple, respectively, last season. They don’t have the tools that teams normally look for in the first round, though. Yet, most of the guys with those tools haven’t quite hit their stride. Here are the 2019 pass-rushing grades for some of the top prospects:

As you can see, outside of Basham, a lot of the edge defenders could use (or will already get the chance to use, in some cases) a 2020 season.

The fact that the Crimson Tide can afford to have talents like wide receiver Jaylen Waddle and defensive tackle Christian Barmore ride the bench last season is why they’re, well, Alabama. Despite Barmore playing 256 snaps last season and Waddle only 293, both earned firm first-round grades in the PFF Draft Guide. 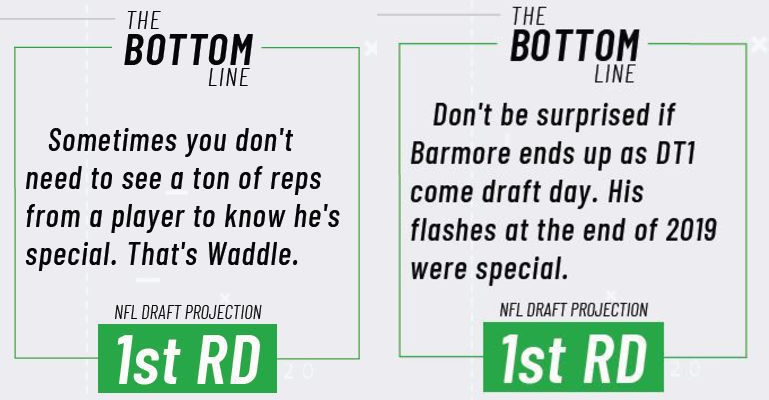 4. Penei Sewell is unlike any tackle prospect we’ve ever seen

In a year that saw four tackles drafted within the first 13 picks, it was the 19-year old Oregon tackle who led the position in wins above replacement. His 95.8 overall grade last season was the highest we’ve ever given to a tackle. And when I say in the draft guide that he doesn’t have weaknesses, I am not lying.

5. Florida State’s Cory Durden has the most pressures of any returning defensive tackle in the country

Don’t be afraid to ask, “Who?” Truthfully, Durden wasn’t even on my radar until I started digging into prospects in May to see who would make the draft guide cut. To my surprise, it was Marvin Wilson’s teammate whose 45 pressures topped all returning defensive tackles. Durden has an incredible motor as a pass-rusher and barely came off the field last year (721 snaps). He’s definitely a name to watch this fall.

Etienne could not be brought down last season. He led the nation in broken tackles (91) despite ranking 32nd in attempts (207). That forced missed tackle rate was the highest PFF has ever recorded for a single season. Oh, and he also averaged the most yards after contact per attempt (5.07 yards). He doesn’t have much more to prove at the college level.

Wake Forest wideout — and 2020 opt-out — Sage Surratt went down for the season midway through the Virginia Tech game last year. You can see for yourself what Newman did from there on out:

While Newman looks like he’ll get a shot to redeem himself at Georgia this season, Surratt won’t be putting any more snaps on tape. The fact that the Demon Deacons' offense went in the tank without him has to be seen as a positive in his favor. If you’re wondering what kind of receiver a team will get in Surratt, his pros and cons from the draft guide give a good glimpse:

8. TCU has one heck of a safety duo

They’re not just good — they were the best last season. Ar’Darius Washington and Trevon Moehrig ranked first and second, respectively, in overall grade among all safeties in college football last season.

Both were also members of Bruce Feldman’s yearly Freaks List this offseason. That’s usually a good combination to have. The fact that both players came from the same 2018 recruiting class is nothing short of incredible.

When the dust settled in the PFF Draft Guide, 11 wide receivers had earned top-three round grades — including a ridiculous six first-round grades. They were:

That’s some serious talent, and we haven’t even had a chance for breakout candidates like Justin Jefferson, Brandon Aiyuk, K.J. Hamler, and Devin Duvernay last season to show off what they can do in the NFL.

He may not have a cannon for an arm. He may not run a 4.6-second 40-yard dash. He may be only 6-foot-1. But don’t think that means Purdy isn’t a legit NFL prospect. He’s played exceptional football at Iowa State in his two seasons despite a paucity of NFL talent surrounding him.

It’s rare to see a quarterback grade out that well in only their true sophomore season. And it's rare enough that we see him as a top-15 player in the draft class.