After a tough, two-game road trip, the USC Trojans got back to their winning ways, riding a strong performance from their offensive line and just enough plays from their quarterback and defense to hold on to a 39-36 win over Washington State on Friday night.

True freshman QB JT Daniels completed 17-of-26 passes on the evening for 241 yards and three touchdowns. He heavily involved his playmakers, giving a decent target share among wide receivers Amon-Ra St. Brown, Michael Pittman Jr. and Tyler Vaughns, the latter seeing a team-high 11 targets against the Cougars. Daniels hit each of the aforementioned trio for a touchdown including a contested catch by Vaughns, a short curl that Pittman took all the way for a 50-yard touchdown and a perfectly thrown pass to St. Brown. 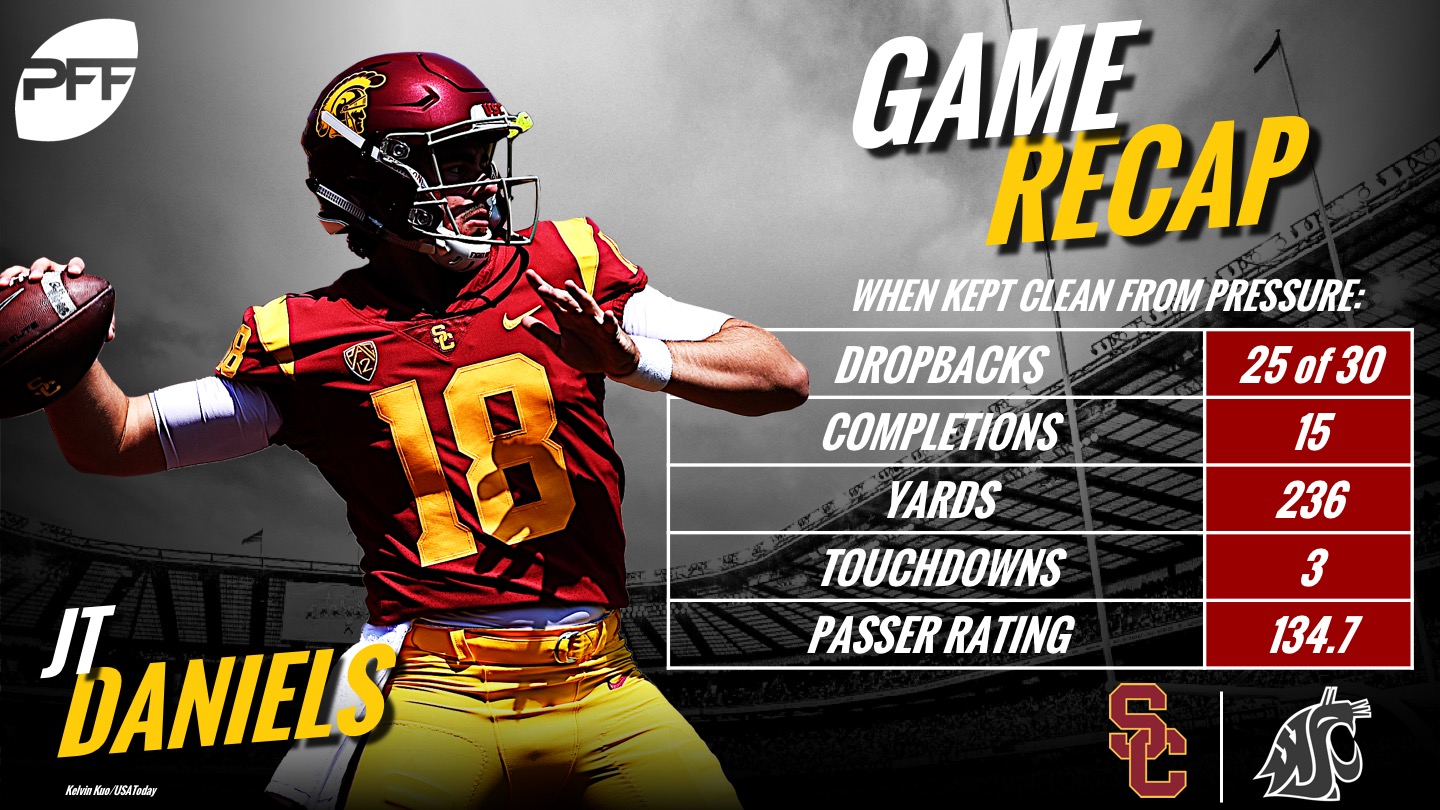 Perhaps the most impressive feat of the night, however, was Daniels work from a clean pocket. He was kept clean from pressure on 25 of his 30 dropbacks, completing 15 passes for 236 yards and all three of his touchdowns for a 134.7 passer rating. His offensive line did an incredible job keeping him upright and away from pressure, allowing just one pressure as a unit against the Washinton State defense.

In addition to their success in pass protection, four of the five starting offensive linemen received plus grades in run-blocking, most notably right guard Andrew Vorhees and his 74.8 run-blocking grade. Vorhees paved the way for a rejuvenated run game that had previously struggled the past two games. 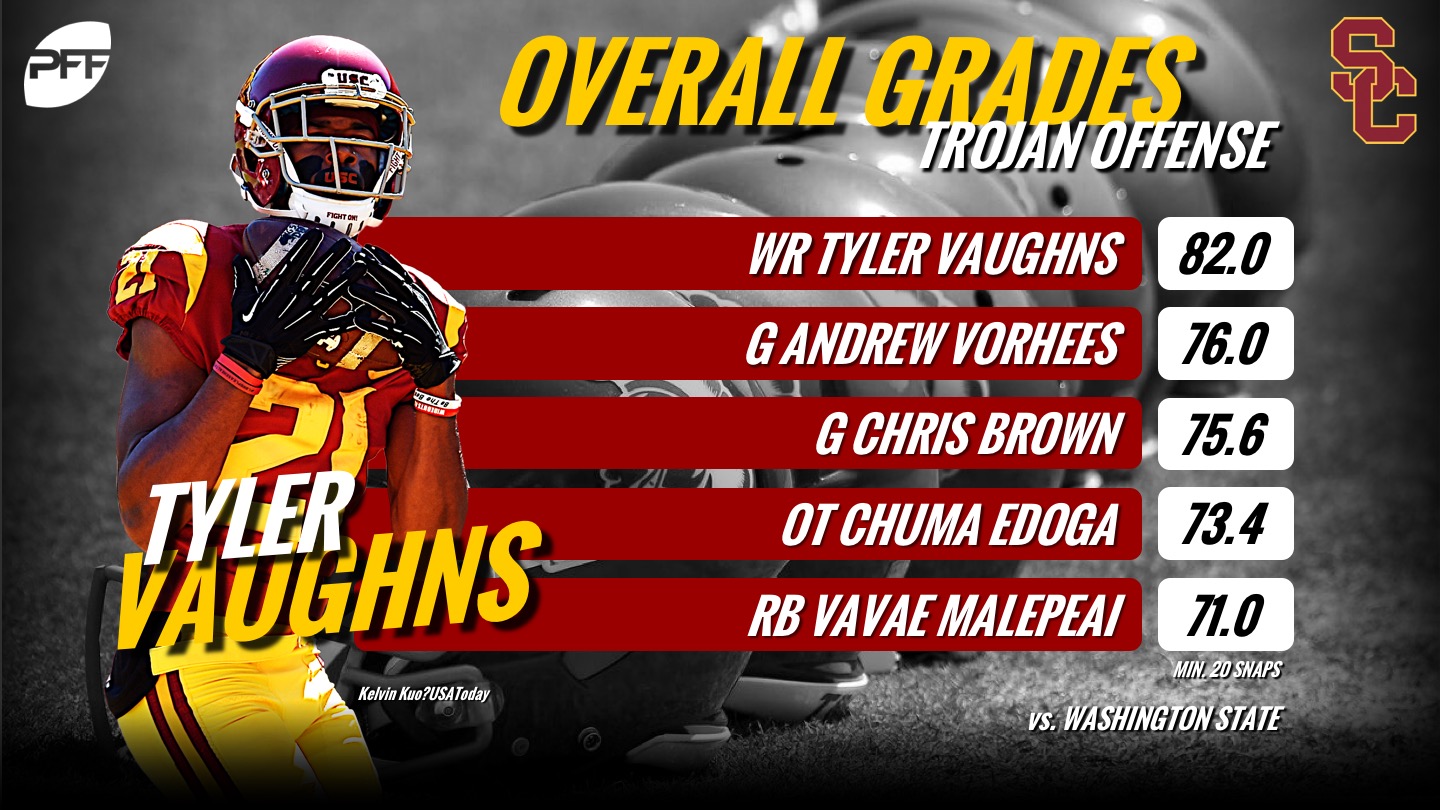 Against Washington State, the USC running backs carried the ball 12 times to either side of Vorhees for a combined 104 yards, averaging 8.7 yards per carry and one rushing touchdown. Stephen Carr and Vavae Malepeai were the beneficiaries of the Trojans strong run-blocking, totaling 155 rushing yards between the two of them including two touchdowns from Malepeai.

On defense, Cameron Smith continued his strong season and finished with 14 solo tackles including eight stops. He was heavily targeted in the Washington State air-raid offense, seeing seven targets but allowing only six of those to be caught for just 28 yards. 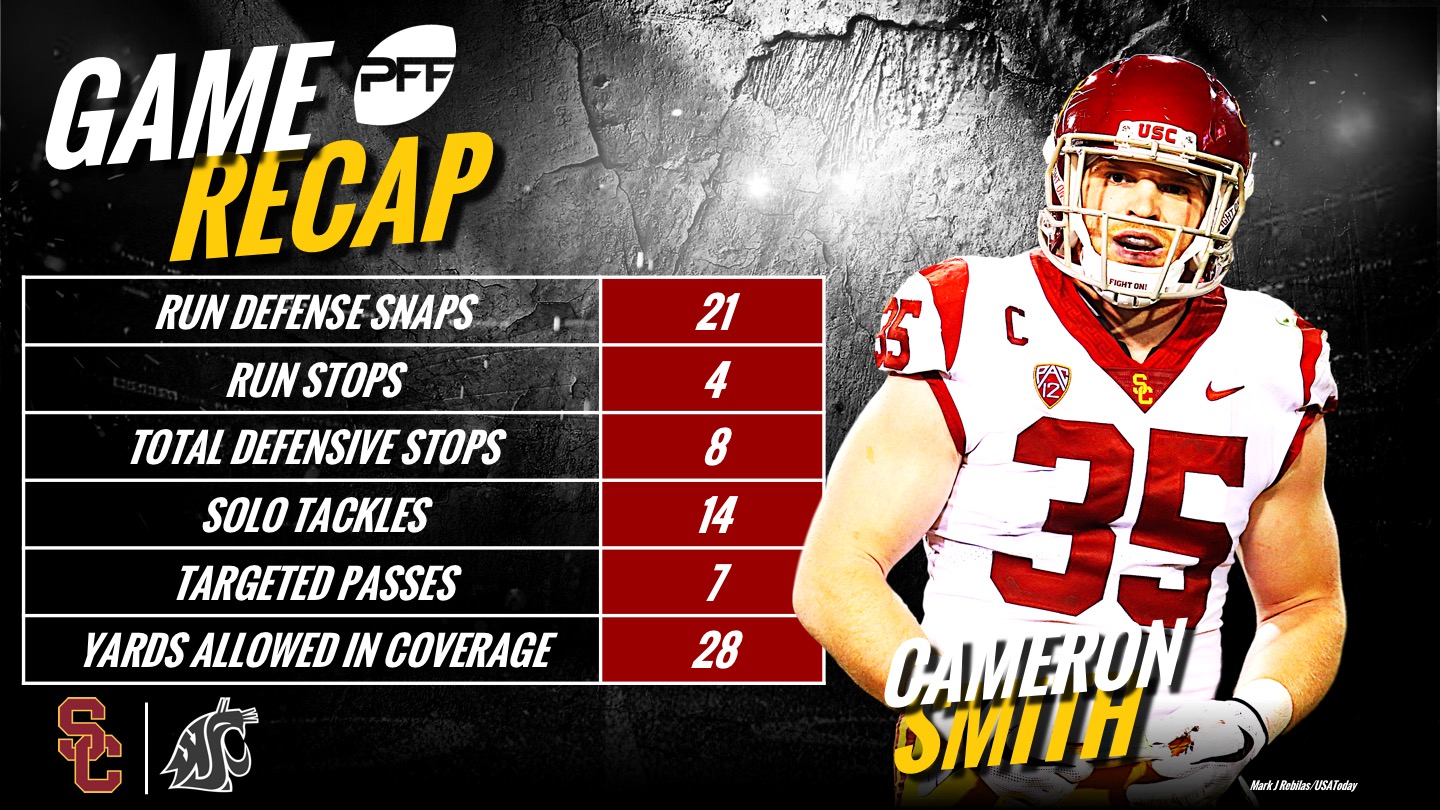 Both USC safeties had strong performances in coverage against Washington State as Talanoa Hufanga and Marvell Tell III each recorded a pass breakup and just 15 combined yards on six targeted passes as the primary coverage defenders.

By riding their offensive line to victory and allowing their playmakers to do the heavy lifting on offense, the defense did just enough, when it mattered most to hold on to a win. Could this be a recipe for success while Daniels continues his adjustment to college football? Only time will tell, but for now, USC can enjoy that winning feeling all weekend after a strong team performance.