The 5 top-graded defensive players from every Power-5 conference

We are now officially into Week 6 after Thursday night's action and while neither game pitted any Power-5 teams against one another, we figured now is the best time to unveil the highest-graded players from each Power-5 conference on both offense and on defense.

This list of top grades by conference is brought to you by Eckrich, the Official Smoked Sausage of the College Football Playoff.

Before we get into the action of Week 6 with Friday Night Football – here are the top-five graded offensive players in every Power-5 conference through five weeks of football: 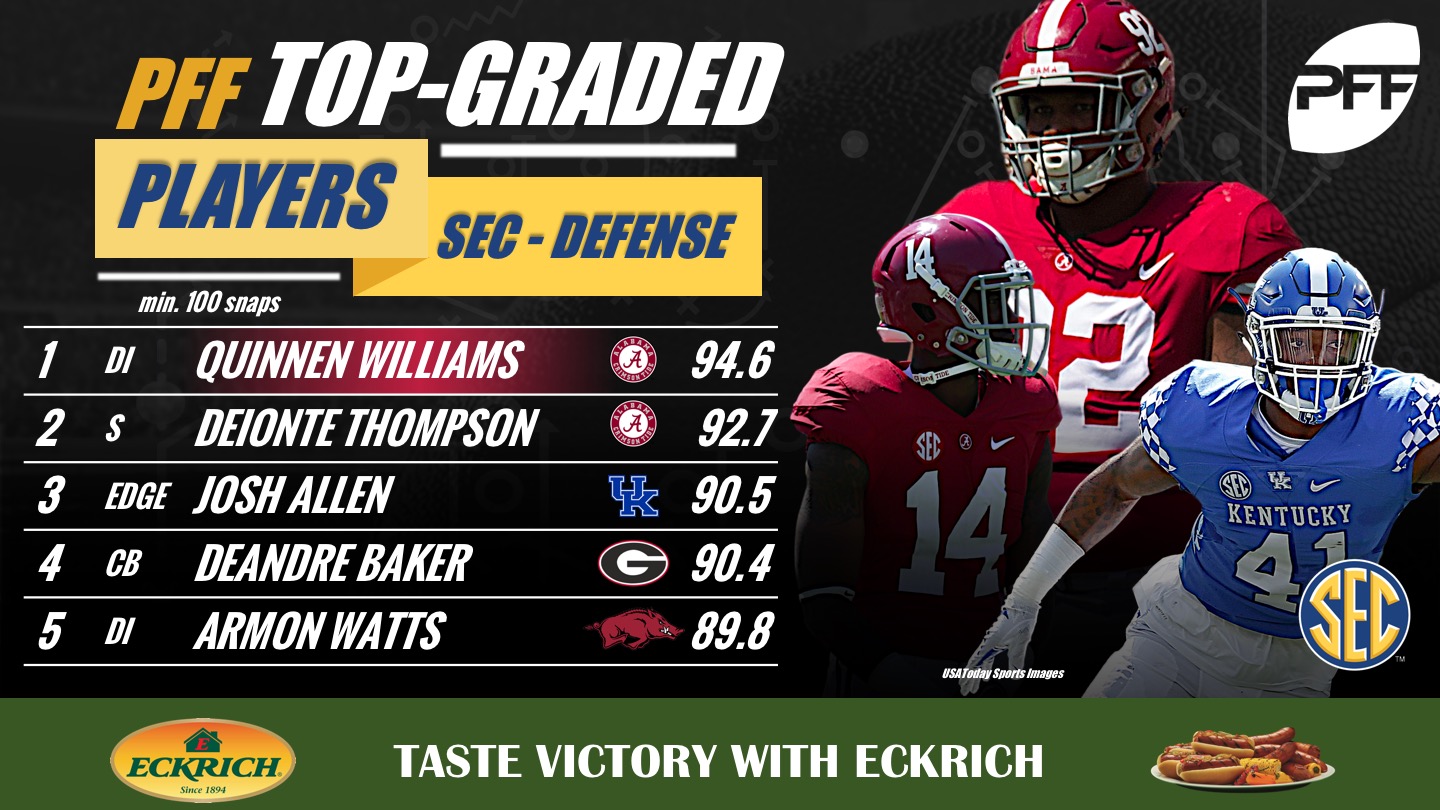 Williams is the highest-graded player in the entire country as he's proven unstoppable in each facet on defense. His run-defense grade of 95.3 is 4.2 grade points clear of second in the SEC at any position while he's racked up 12 pressures already from the defensive interior.

As mentioned when he cracked our Heisman rankings, Thompson makes all the plays you'd expect and the splash plays you'd want. Not quite up to the level of Derwin James, yet, but Thompson's pass-rushing, tackling, run defense and coverage have been stellar so far this season. In coverage, Thompson has been targeted 14 times already, coming down with two interceptions and four more pass breakups, making more plays on the ball (5) than receptions allowed (4).

A force off the edge, Allen has 16 hurries which would rank him tied for fifth place in total pressures in the conference. He adds to that with six sacks and seven QB hits to give him 29 total QB pressures this year – 11 more than the next closest SEC defender.

Baker has been tested in coverage 20 times this season, allowing 12 receptions for just 14 total yards after the catch. He's broken up five passes and intercepted two more all for a passer rating of 29.0 when targeted.

Not who you were expecting to round out this list? Watts has been a force to reckon with, registering 12 QB pressures including four sacks to tie for the lead among SEC interior defensive linemen. He's totaled 10 tackles including eight defensive stops and has done so without missing a single tackle. 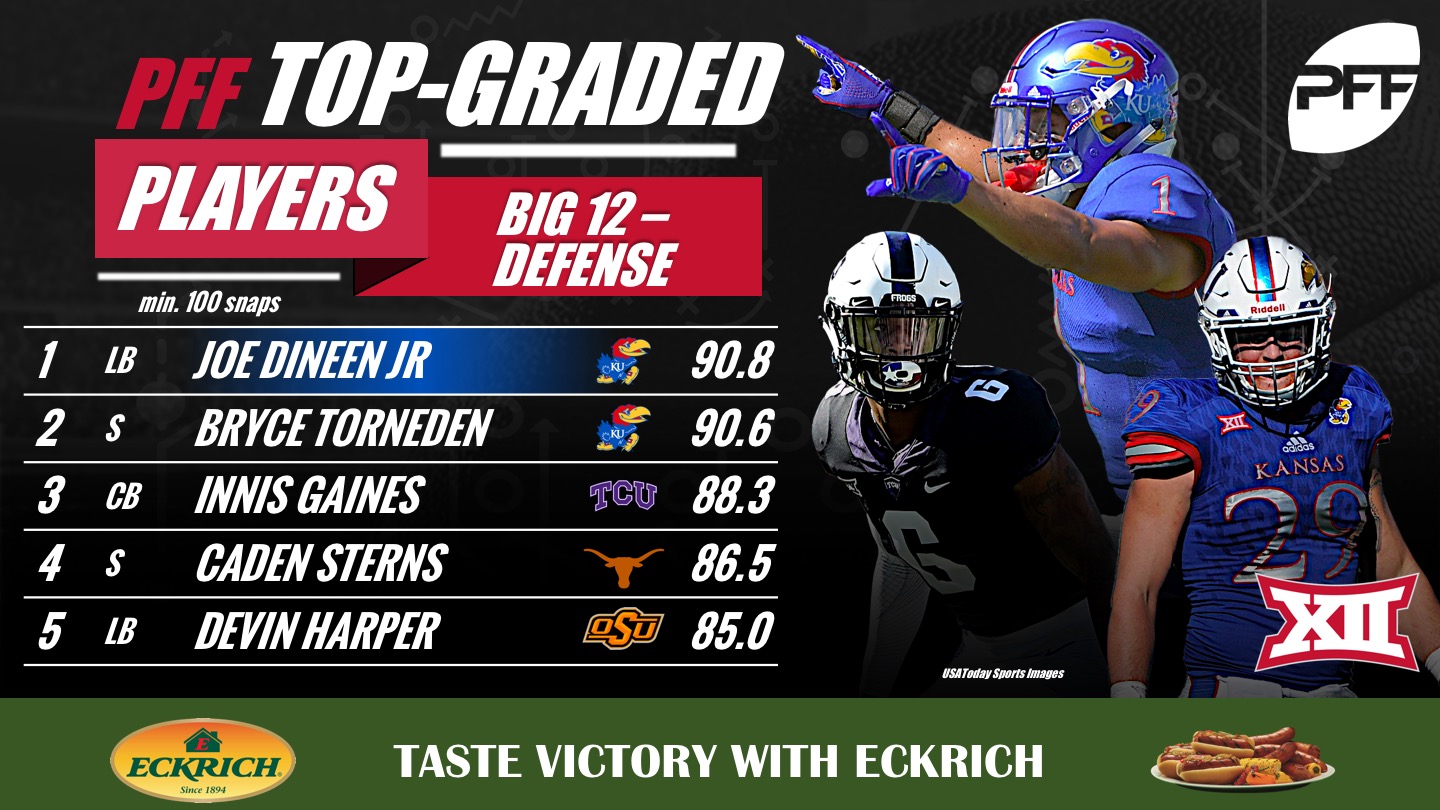 Dineen has long since been a run-stopping machine at linebacker and this year is no different except he's getting it done all over the field. He has five QB pressures from just 13 pass-rushes, has allowed just 35 yards on 10 targets in coverage and has a whopping 35 defensive stops, 12 more than the next closest Big 12 defender.

Joining his teammate atop this list, Torneden has recorded an interception this season in coverage but saved his best work for blitzing. On just seven pass-rushing snaps, he's recorded a sack, two additional QB hits and another hurry.

Gaines has allowed just six receptions as the primary coverage defender this season, for just 25 yards. He's broken up four more and added an interception of his own.

The true freshman has broken out in a big way and leads all conference defenders with three interceptions. He's caught more targeted passes than he's allowed receptions (2) and sports a 0.0 passer rating when targeted.

Less-heralded than some other Big 12 linebackers, Harper has excelled this season. He's brought in seven QB pressures on just 18 pass-rushes while he's made 21 tackles and just missed one tackle attempt. 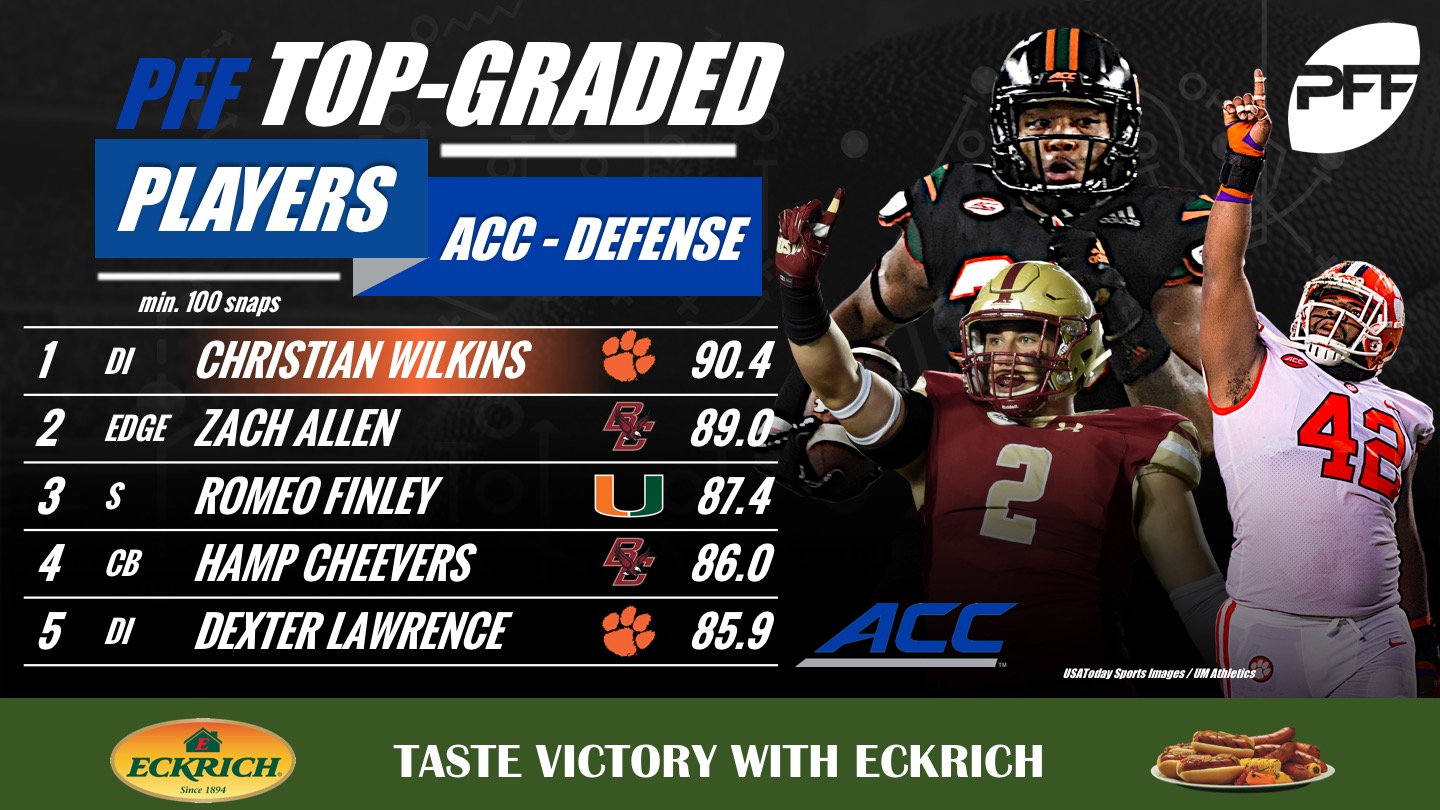 All the preseason hype was on the Clemson defensive line as they've more than lived up to the billing. Wilkins has added a solid pass-rushing resume to his game this season, bringing in 11 pressures on his 92 pass-rushes including a sack and two QB hits. Currently, his 81.8 pass-rushing grade is a career-high.

Allen has lived in Harold Landry's national shadow long enough. Despite two solid years of production, Allen has stepped up his game in 2018. He already has 28 QB pressures including three sacks and 10 QB hits, which ties for his career-high.

Cheevers has been targeted 26 times already, with not much success from opposing quarterbacks. He's allowed just 46.2% of passes thrown his way to be caught while he's intercepted three balls and recorded three pass breakups.

One of the big-three along the Clemson defensive line, Lawrence has had three triumphant years of grading with the Tigers. While his pass-rushing numbers declined a year ago and he may be without a sack so far this season, his 14 total pressures are just four short of the 18 he managed all of last year. 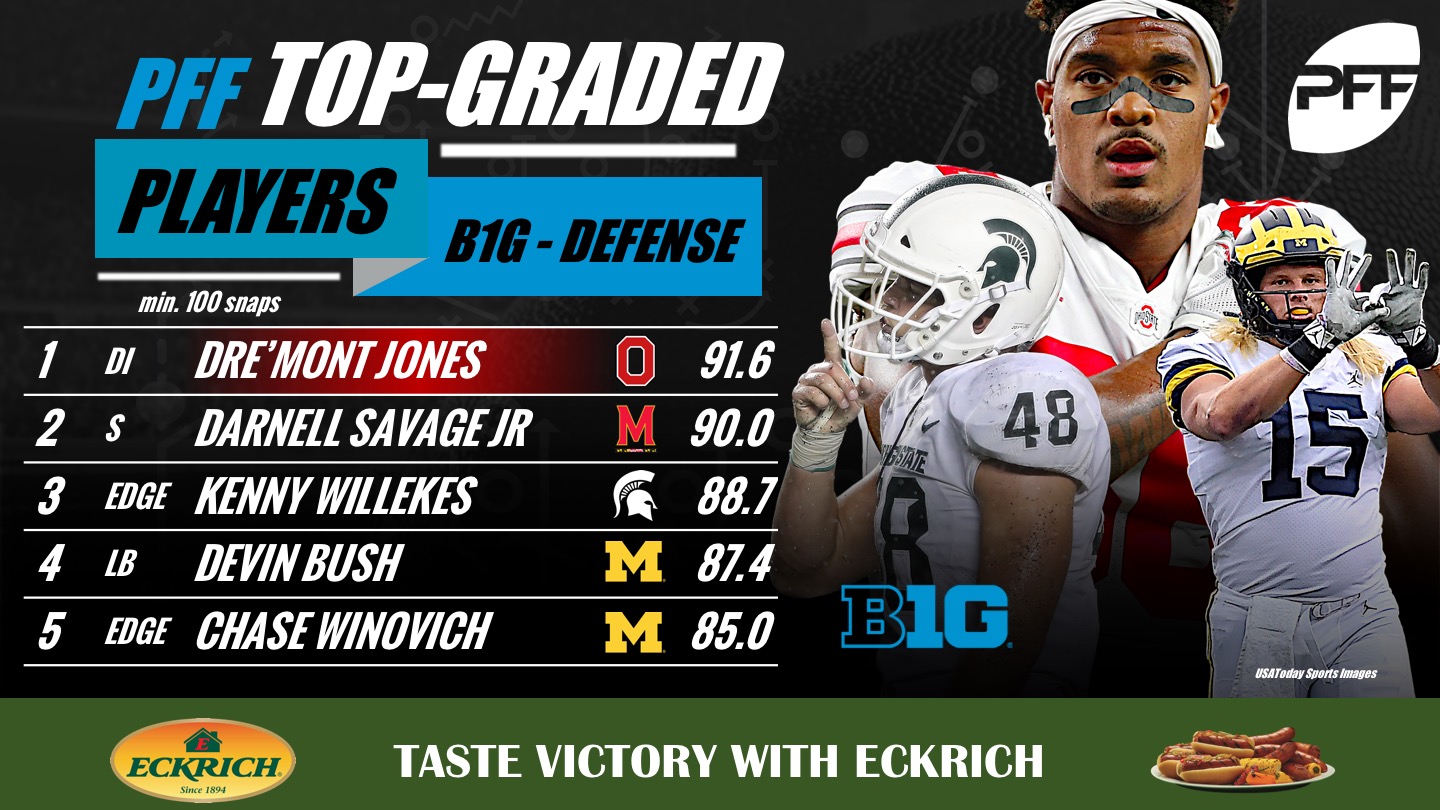 Nick Bosa would be atop this list had he been healthy enough and in action recently. Still, it's a Buckeye to grace the top-graded defensive players in the Big Ten with Jones sporting the top mark. He's recorded 12 total QB pressures this season and also made one of 2018's highlight-reel moments with his Pick-6 against TCU.

Savage has spent 112 snaps in coverage, seeing 13 targeted passes as the primary coverage defender. He's allowed just six receptions for only 16 yards, an average of just 2.7 yards per reception allowed and only 0.14 yards per snap in coverage.

Willekes leads the Big Ten with his 10 QB hits as he's also recorded four sacks and 13 additional hurries. His 27 total pressures are good enough for second this season.

Bush has been outstanding in coverage for the Wolverines this year. He's been targeted 12 times and despite allowing 10 receptions, he's only given up 23 yards. Limiting receivers to just 2.3 yards per reception is great no matter which position you play on defense.

Winovich has been unblockable this season. On 142 pass-rushing snaps, he has recorded the conference's best 28 QB pressures. 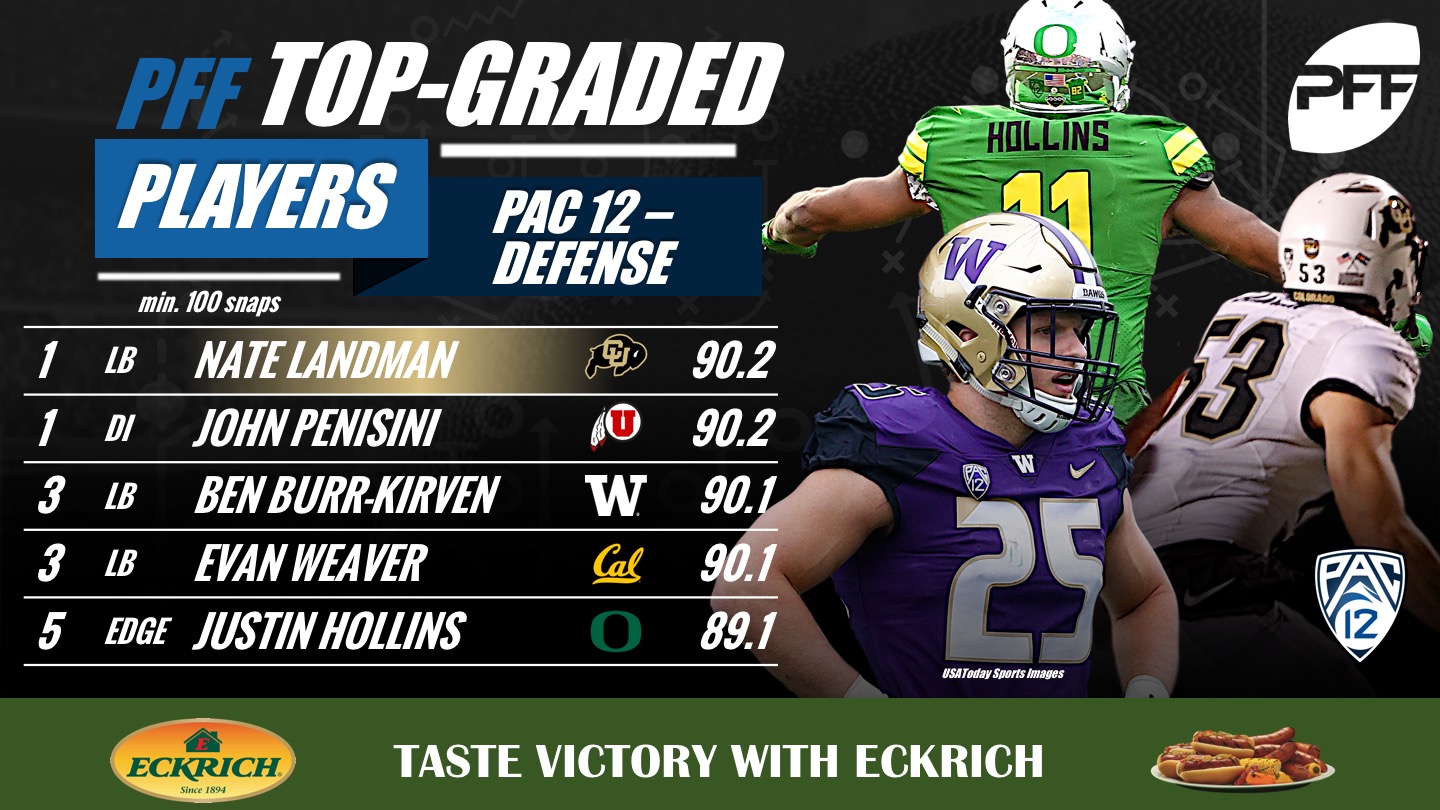 Landman tops the charts in the conference here, tying with Penisini of Utah on the heels of strong all-around play. He's brought in two pressures on seven pass-rushes, 21 defensive stops and also allowed just two receptions while intercepting two passes of his own.

Penisini has recorded 11 total pressures this season – on just 63 pass-rushes from the defensive interior. He's also been a sure-tackler, recording 15 total tackles and only missing one.

Solid all-around play is the name of the game for Burr-Kirven as he's recorded four QB pressures and a conference-leading 59 total tackles. His 25 defensive stops are good enough for third as he has missed only a single tackle attempt this season.

Keeping pace with Burr-Kirven, Weaver has been solid across the board but been incredibly strong in run defense. His 14.8% run-stop percentage is second only to Landman as he's made 19 stops against the run.

Coming in just behind teammate Jalen Jelks (17 pressures), Hollins has recorded 16 total QB pressures this season. He wins with his array of pass-rushing tricks and has also shown a penchant for dropping back into coverage, to the tune of an interception and a pass breakup on three targeted passes.