It’s won in the trenches. Dominate the line of scrimmage.

No matter what football cliché one uses, most understand they are describing the offensive line.

Earlier this week, PFF’s Gordon McGuinness outlined the top 10 offensive line groups in the country this season, and as we give one final look at last week by outlining an interesting observation pulled from PFF’s wealth of college data, our Top 25 Observations series focuses on the men up front, highlighting a specific offensive lineman on every team in the PFF Top 25.

[Editor's note: This story will focus on pass-blocking efficiency, the PFF metric that measures pressures allowed on a per-snap basis with weighting towards sacks allowed.]

The three-year starter has been the Tide’s most consistent performer in 2018. Our third-highest graded tackle has only allowed four total QB pressures (no sacks) in 157 pass-block snaps. His 82.6 run-block grade is also third among tackles and he’s only been penalized once. 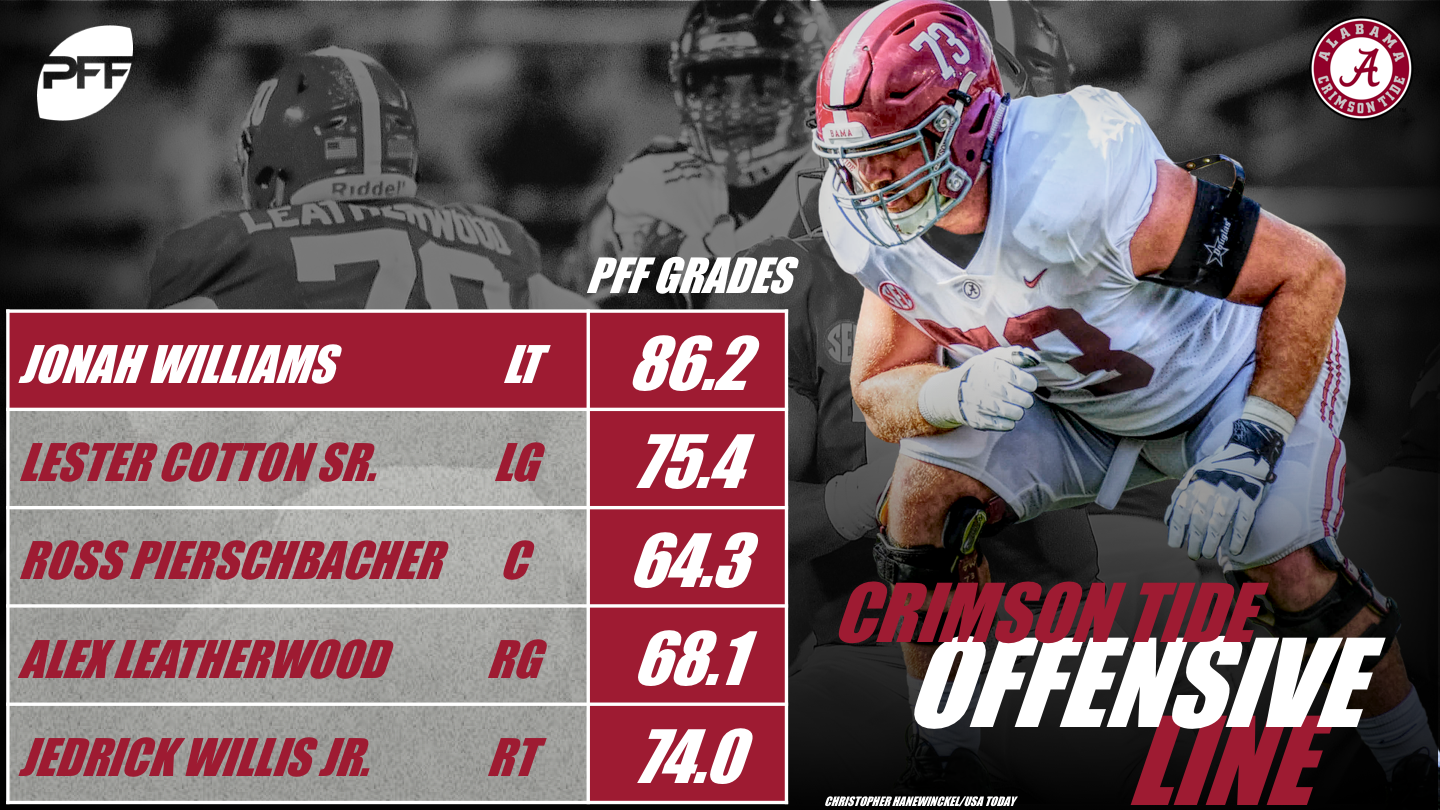 While his younger teammate, LT Andrew Thomas, is PFF’s highest-graded lineman overall, the three-year starter Gaillard has been the anchor for our No. 1 offensive line group. The senior, who started his career on the defensive line, is the only non-freshman or sophomore getting significant snaps and having the best season of his career. He’s the fifth-highest graded center in overall grade and in run-block grade while he's only given up three total QB pressures. 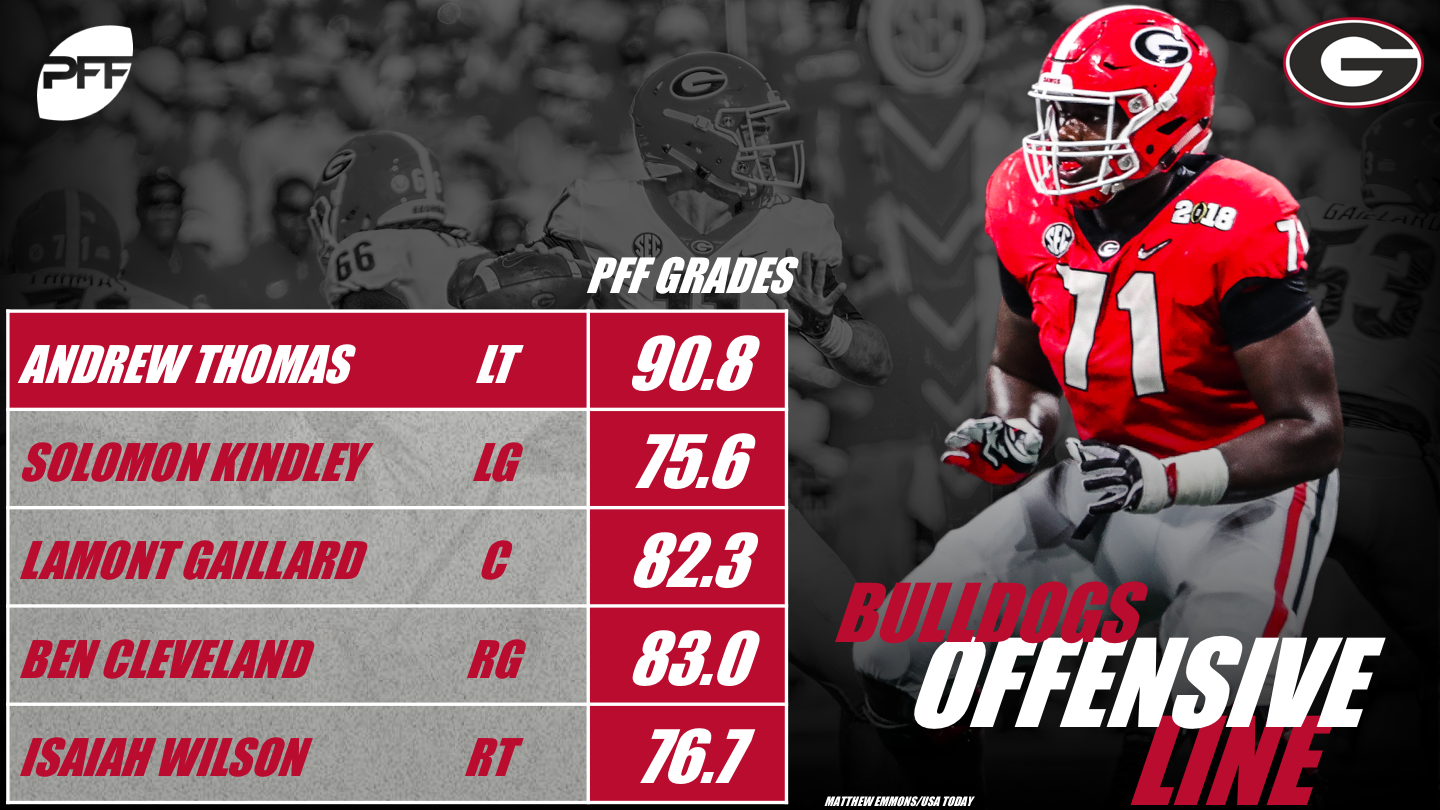 After leaving the Syracuse game with an ankle injury, Anchrum returned to help Travis Etienne and the Tigers run all over Wake Forest. Anchrum is Clemson’s highest-graded lineman and has yet to allow a QB pressure on the season in 150 pass-blocking snaps.

Pass protection has been an issue for the Fighting Irish this season – no matter who has been the quarterback. In the first three games with Brandon Wimbush (67.1), they allowed 36 total QB pressures. Despite improved quarterback play the past three games with Ian Book (77.2), they have still allowed 35 total QB pressures during that span. Now that LG Alex Bars (74.2) is out for the season with a knee injury, Hainsey is their highest-graded lineman in both pass- and run-blocking, allowing 10 total QB pressures (only one sack) on 217 pass-block snaps.

After two seasons of starting with snap one as a freshman at left guard, Jordan is currently our 13th-highest graded center and anchors one of our top 10 overall lines. Jordan has improved each year, especially in pass-blocking. After giving up 29 total QB pressures as a freshman, that number dropped to 16 as a sophomore and to this point, he has only allowed two hurries and no sacks. 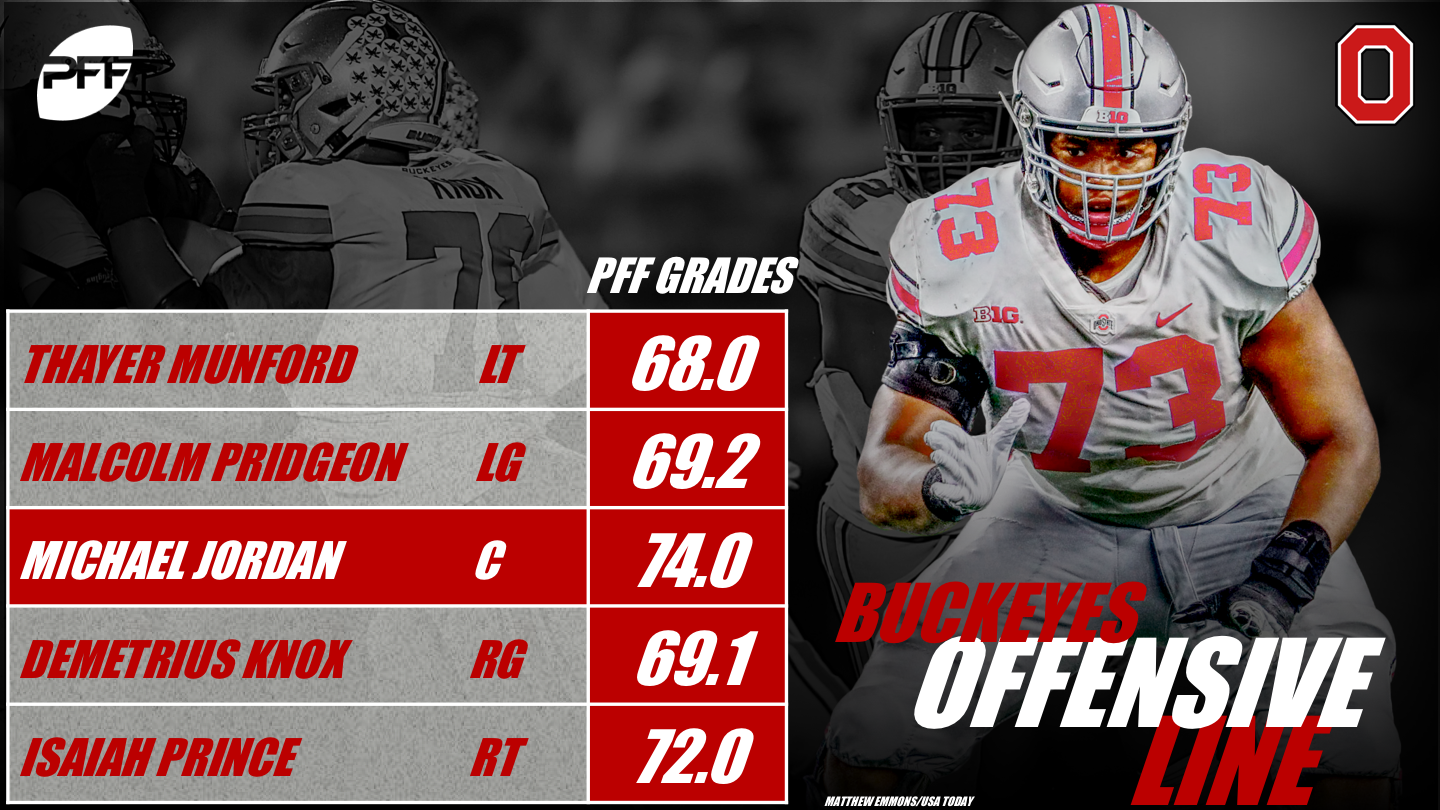 While not the highest-graded lineman on another of our top 10 units, Benzschawel has been the most consistent. The third-highest graded guard is also fourth in the nation in run-block grade. Benzschawel has only allowed three total QB pressures on 128 pass-block snaps and yet to be penalized. 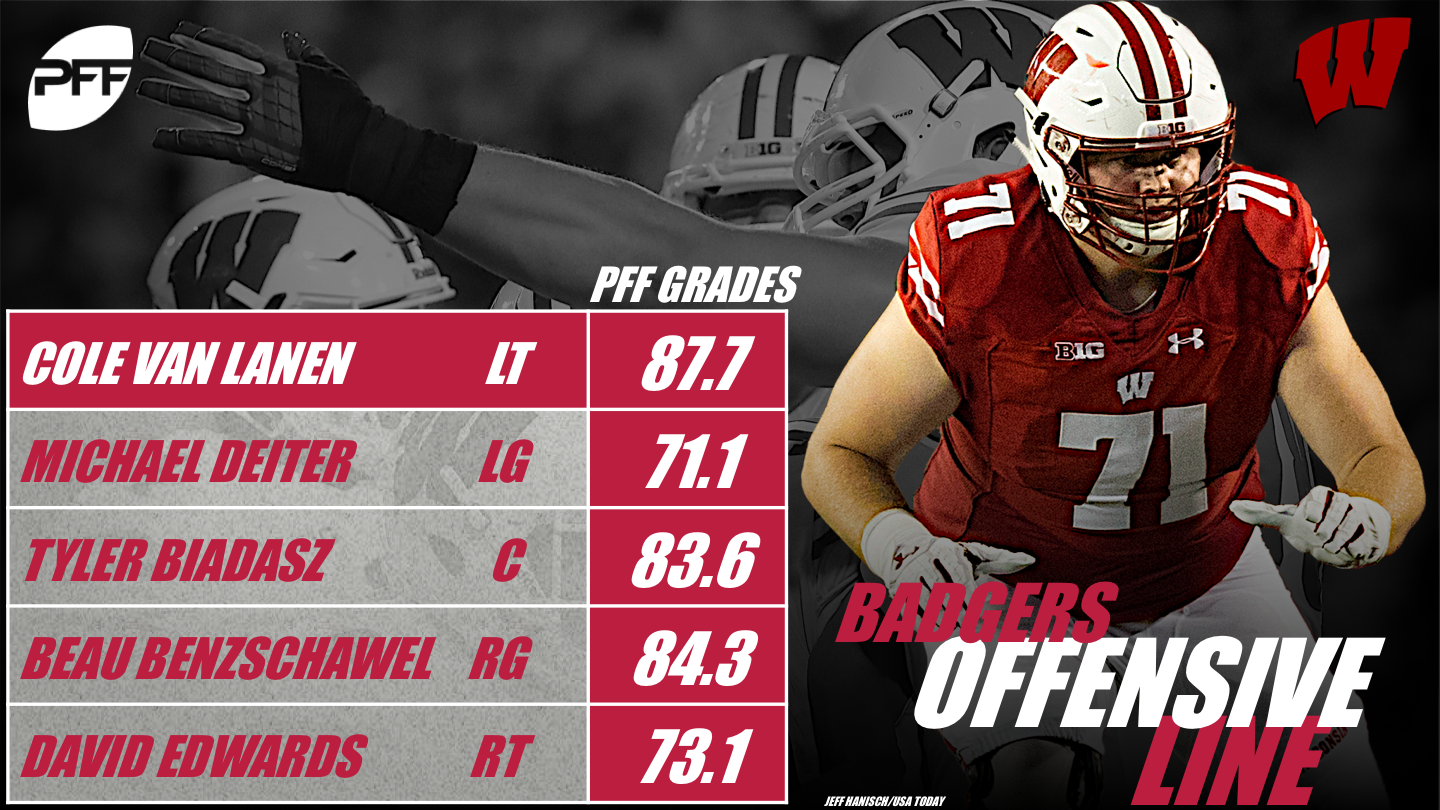 Another top-10 team not very strong at pass-blocking, the Nittany Lions have forced QB Trace McSorley to be under pressure on 32.1% of his dropbacks. Bates, their highest-graded overall and pass-blocking lineman, has been a bright spot this season – except against Ohio State’s fierce pass-rush. On the season, Bates has allowed only eight total QB pressures, but five of those pressures (and two sacks) were in the one-point loss to the Buckeyes.

A three-year starter for the Knights, Johnson is having his best season yet, as his current grades would be a career-high in each phase. Johnson has allowed only four total QB pressures (zero sacks) and been penalized just twice.

Another top-10 unit, the Huskies offensive line does not have a standout performer from a grade perspective but is solid across all positions. Harris is the group’s highest-graded performer and the 11th overall while holding the eighth=highest run-blocking grade among FBS centers. He’s only allowed three QB hurries while only being penalized once.

No other Hurricane lineman has been on the field for as many snaps as Gauthier the past two seasons, 92.5% this season (392) and 98.5% last season. The team’s third-highest graded lineman has only allowed four total QB pressures (zero sacks) and yet to be penalized.

After being in and out of the lineup in 2017, Wanogho has improved his grade in every facet this season. He has been on the field for 89.1% (375) of the total possible snaps and allowed five total QB pressures (one sack) while he is the Tigers’ highest-graded run-blocker among their regular contributors.

The leader of another of our top 10 units, Prescod has been one of the best linemen in college football this season. He has the second-highest grade among all linemen and is first in run-block grade while only allowing two QB hurries. His performance, along with our third-highest graded center Garrett Bradbury (83.2), will be key moving forward as the Wolfpack look to challenge Clemson for ACC supremacy.

Cushenberry has excelled in pass-blocking, not allowing a QB pressure or being penalized thus far this season. However, he and the team as a whole has struggled in the run game. Tiger backs have gained 64% of their yards after contact and the team’s 64.0 overall run-block grade is 10th in the SEC.

Wiggs has played the most snaps and been the most consistent pass-blocker for the Bulls, only allowing two total QB pressures. Run-blocking, though, has been a struggle for the Bulls overall. Their team run-block grade (58.8) is 96th the FBS.

After intermittent playing time early in his career, Bushell-Beatty began starting late last season and has kept that spot ever since. The fifth-year senior is now having the best season of his career, only allowing five QB hurries on 172 pass-block snaps and being penalized once through six games.

The redshirt sophomore has already played more snaps in 2018 than he had prior to this season and is currently the Cowboys’ highest-graded lineman. He is also the only Cowboys’ lineman with an overall grade over 70.0.

Seeing his first true action at the FBS level, the junior has the Bulldogs’ highest overall and run-block grade. He has only allowed four total QB pressures and been penalized once this season.

A starter since his true freshman season, the now junior has been the highest- or second-highest graded Gator lineman since he’s been there. He’s only given up four total QB pressures, but his six penalties to date are the fifth-most among tackles. Overall, the Gators’ 66.9 team pass-block grade is 103rd in the FBS even though they start five players who’ve played over 7,700 snaps in college combined.

Even though he missed the Auburn game with an injury, Williams has been Mississippi State’s most consistent lineman. He’s only allowed four total QB pressures and his run-block grade is the only on the team above 70.0. He is currently the 12th-highest graded guard (and ninth-highest run-block grade).

Though the junior who played his high school ball in Hawaii is having a down year compared to his 2017 campaign (78.1, No. 14 overall guard), he is still Stanford’s highest-graded lineman by far. He’s the only significant contributor on the line to have a grade above 70.0 overall and in the run game.

The highest-graded lineman from another of our top 10 lines, Dillard has allowed nine total QB pressures on 360 pass-blocking snaps (most among all lineman). His pass-blocking grade is ninth among tackles. The redshirt senior has also had pass-blocking grades over 90.0 in each of the previous two seasons.