As we get ready to embark on another weekend of action with some big games on the slate (PFF No. 3 Ohio State at No. 5 Penn State; No. 12 Stanford at No. 9 Notre Dame), it’s best to give one final look at last week by outlining an interesting observation pulled from PFF’s wealth of college data.

In our Top 25 Observations series, we are providing data from our grading of every player on every play of every game at the FBS level and this week bring you, our readers, the observations on every team’s top playmakers in the passing game, whether they're a wide receiver or a tight end, in our Top 25.

*Yards per route run (YPRR): considers the number of snaps a player went into a pass pattern, which provides a better indicator of production than yards per reception or even yards per target*

Alabama’s receivers have enjoyed the rise of breakout star Tua Tagovailoa, and Jeudy has been the prime recipient who leads the Crimson Tide in receptions, yards and touchdowns. Last week against Texas A&M was the first game Jeudy hasn’t reached the end zone at least twice. Jeudy primarily does his damage from the slot (75 percent of his snaps), as he’s seventh in the FBS in yards out of the slot (345), third in yards per route run (4.93), and second in touchdowns (six) while averaging 24.6 yards per reception from the slot. 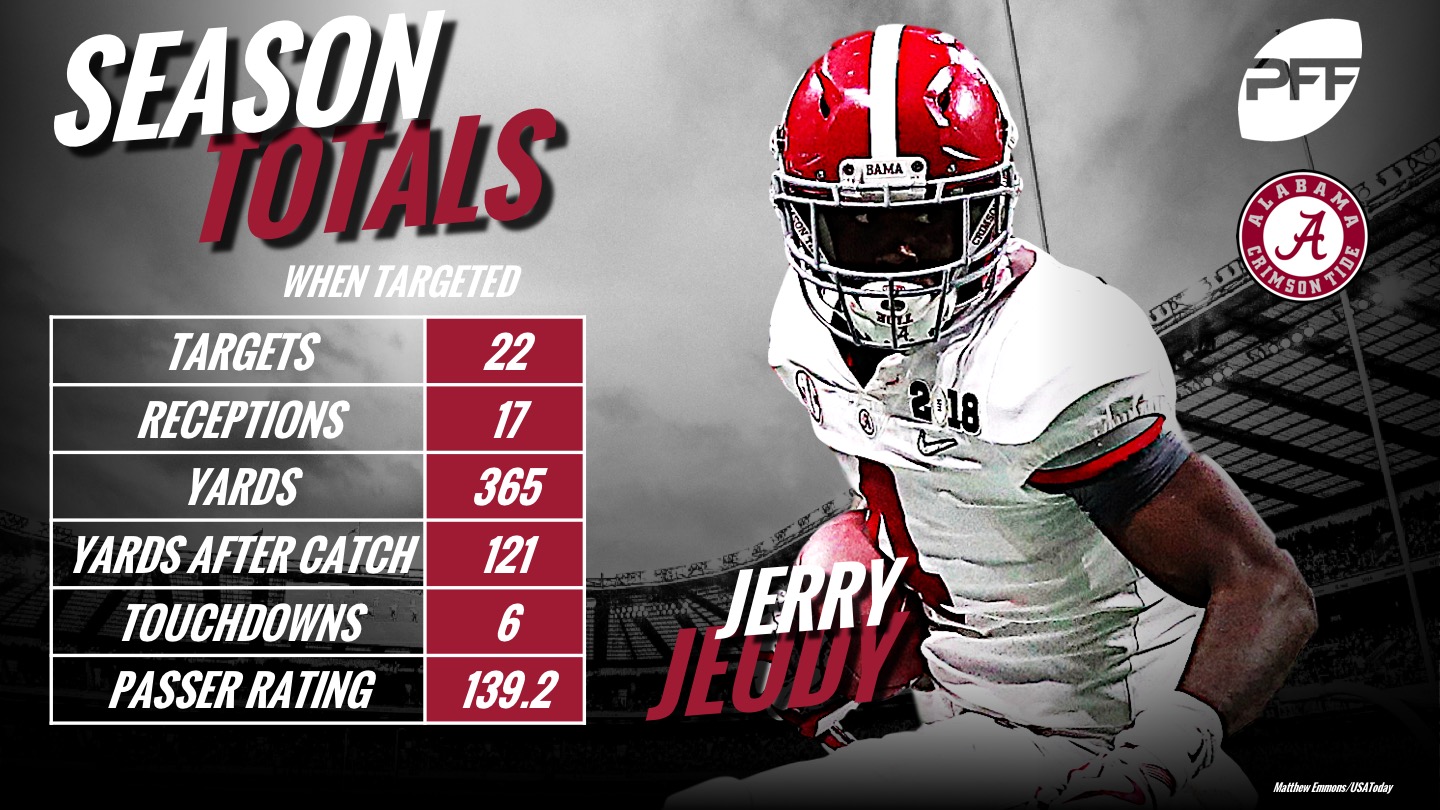 We’ve highlighted the Georgia playmakers previously this season, and both Ridley and Hardman are leading that group for the Dawgs. The duo has combined for 27 receptions, 416 yards and seven touchdowns, with each reaching the end zone this past weekend against Missouri. Hardman is 11th nationally in YPRR (sixth from the slot) and 13th in passer rating when targeted (151.5), while Ridley is fifth nationally in passer rating when targeted (156.5). For Hardman, his damage is done primarily once the ball is in his hands, as his 12.1 yards after the catch per reception is No. 1 in the FBS. Oh, and neither of them have dropped a pass this season.

Much like the aforementioned Alabama receivers, one of the best WR combos in the nation is benefitting from the great play of QB Dwayne Haskins and will look to again light up the scoreboard in the game of the week at Penn State. Hill is our top graded receiver through four weeks and fourth in YPRR, hauling in 21 of his 22 targets for 259 yards and a touchdown. Campbell is right behind Hill in YPRR (fifth nationally) and is tops in the nation with a perfect passer rating when targeted (158.3). Campbell has caught 19-of-23 targets for 299 and five touchdowns. Using his elite speed, he has recorded 213 of his 299 yards after the catch. Like the Georgia duo above, neither Hill or Campbell has dropped a pass yet. 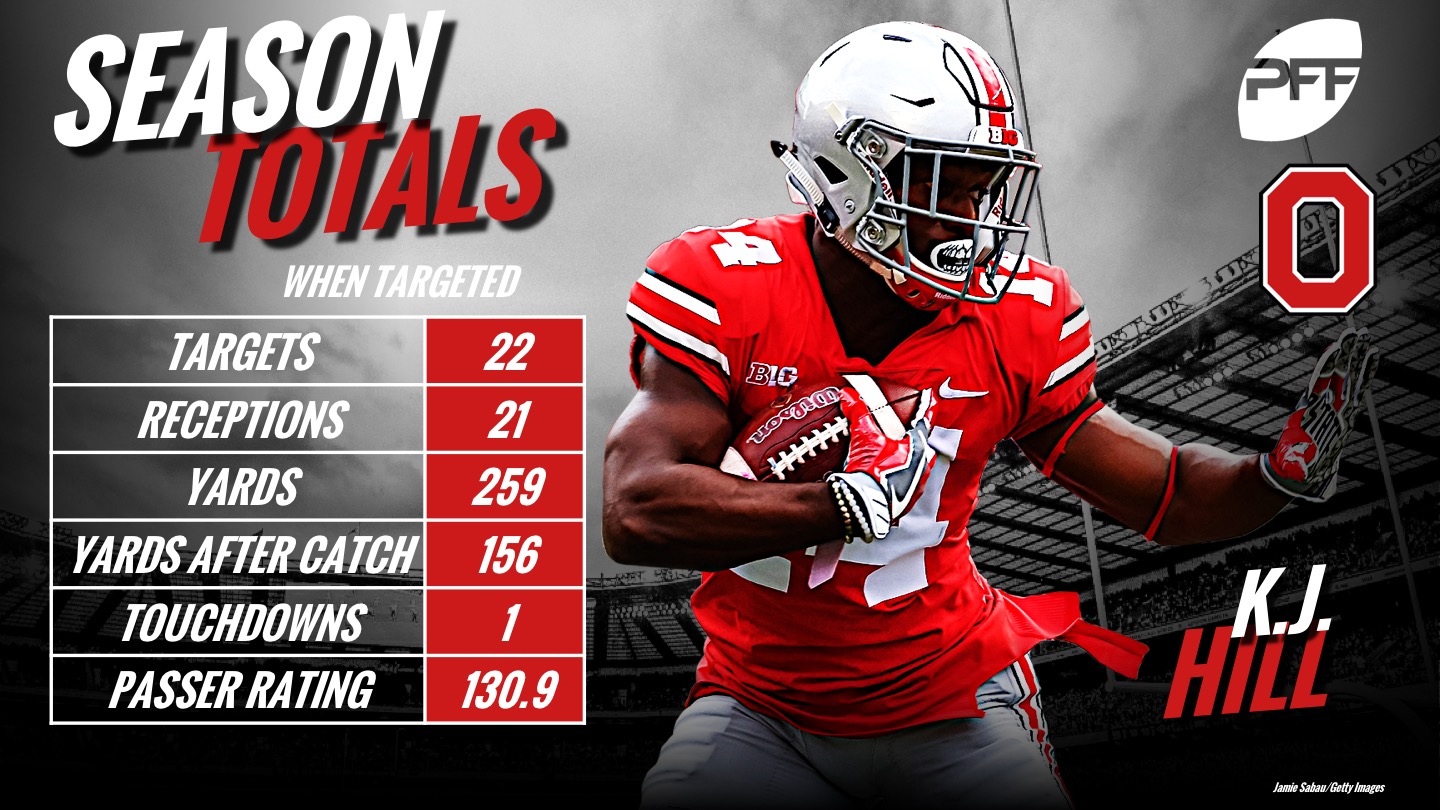 Another elite duo getting elite quarterback play from Kyler Murray. ‘Hollywood' Brown is our 14th-highest graded receiver and sixth in YPRR. In addition, Brown has caught four of his eight deep (20-plus air yards) targets for 195 yards and two touchdowns. Like Paris Campbell, Lamb also has a perfect passer rating when targeted, catching 16 of his 19 targets for 247 yards and four touchdowns.

Big plays in the passing game have been hard to come by for the Nittany Lions this season, but redshirt freshman Hamler has given them solid production working entirely from the slot. He leads the team in receiving yards and touchdowns, including a big 15-yard touchdown reception in the opener against Appalachian State to send the game into overtime.