After grading and analyzing every player on every play of every game during the 2018 college football season, it’s time we unveil the 2019 Preseason PFF All-B1G first team, second team and honorable mention for every position on offense and defense as well as for the first time ever, specialists.

The Preseason All-B1G list may differ a bit from any year-end look back at the previous season as we project to the 2019 season ahead of us. Find out which of these athletes made the PFF All-American team as well. 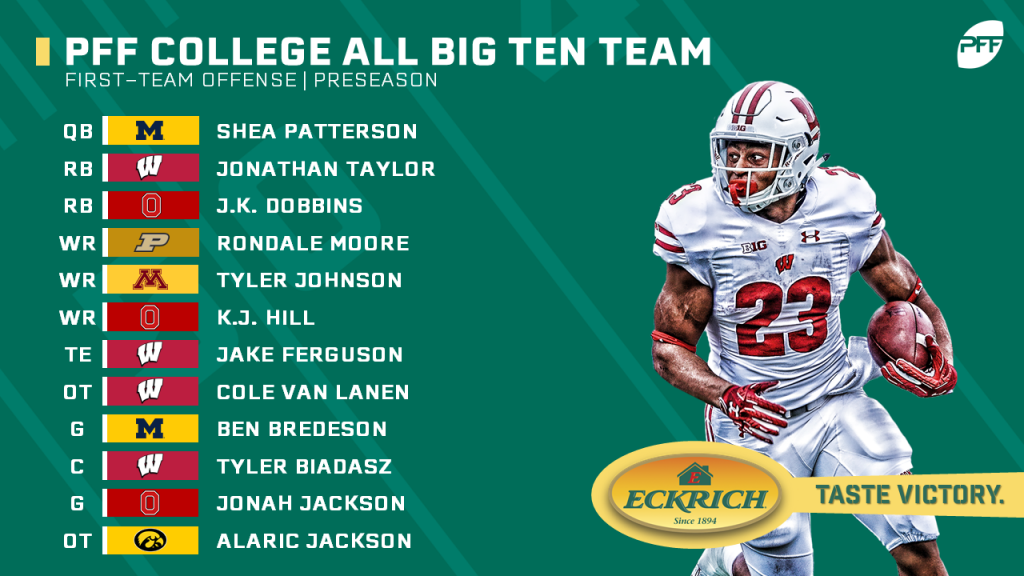 No running back comes close to Taylor's production of back-to-back seasons with 1,300+ yards after contact and at least 66 missed tackles forced on the ground.

With back-to-back 1,000-yard seasons to his credit, Dobbins has now accumulated 1,444 yards after contact and 77 career missed tackles forced on the ground.

The shiftiest receiver in college football returns for a true sophomore campaign after leading the nation with 37 missed tackles forced after the catch last year.

No returning receiver has converted more receptions for a first down or touchdown than Johnson as his 91 lead the next-closest receiver by six and he's the highest-graded active receiver in the red zone just as he is on money downs (3rd & 4th).

Hill returns with the third-most yards after the catch among Power-5 receivers and his average of 7.7 YAC/reception proves just how dangerous he is with the ball in his hands.

No active Power-5 tight end forced as many missed tackles last season than Ferguson and he's a reliable target for whoever is throwing the rock in Madison this year.

Leading the nation's tackles in run-blocking grade by some margin, the aforementioned Taylor has one of the better run-blocking tackles that we've seen in five years of grading out in front of him.

Carried heavily by his pass-blocking, Bredeson is a monster of a man who has allowed all of two sacks on his 1,046 career reps in pass protection.

The pinnacle of the center position in 2019, Biadasz has finished 16 games without a single pressure allowed and dominates at the next level in run blocking.

About the only thing that went well with the Rutgers offense last year, Jackson holds the Power-5's third-highest pass-blocking grade among active guards and slides over to the Buckeyes for 2019.

Against some of the most feared pass-rushers in the country, Jackson allowed just three combined sacks + hits a year ago. 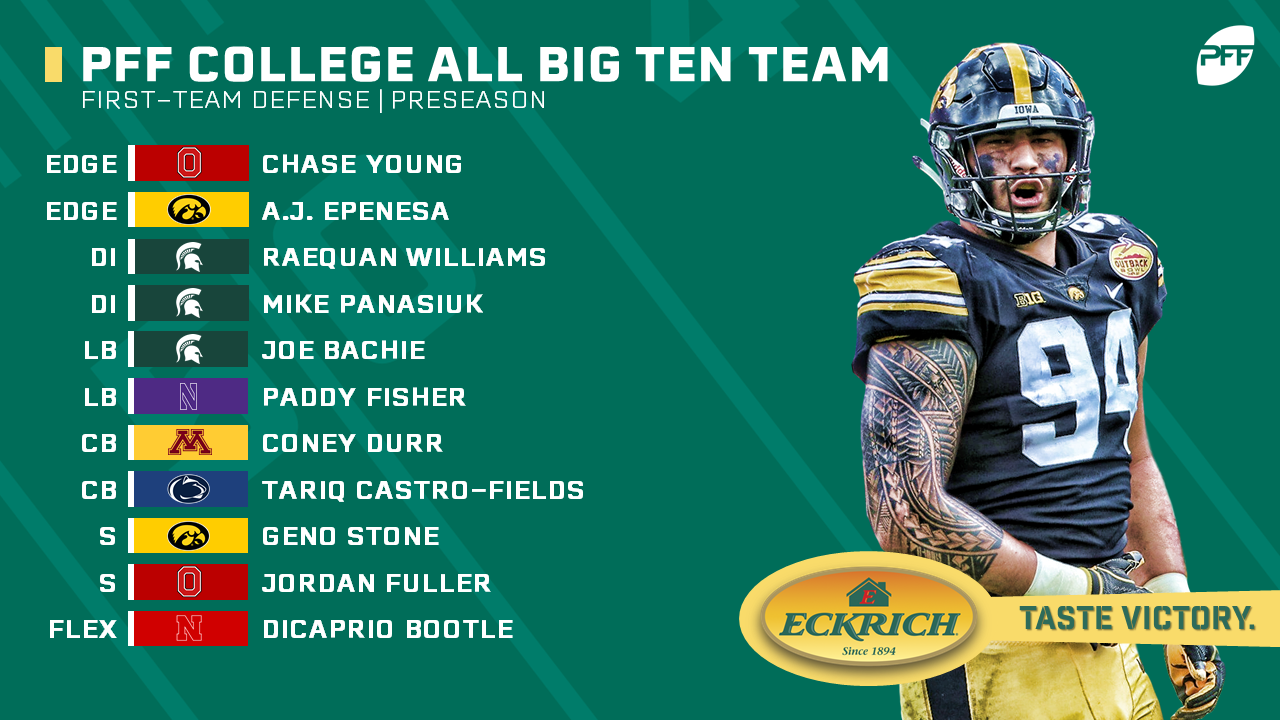 No edge defender had more pressures than Young did in 2018 and that number should only be on the rise as he continually wins his pass-rushes with ease and with a bevy of pass-rush moves.

Epenesa is primed for big things in 2019 in an extended role. On limited snaps, he leads the Power-5 in pass-rush win rate over the past two seasons.

With an elite 90.5 run-defense grade to his credit, Williams' has also recorded 23 QB pressures that include eight sacks and hits.

Getting it done much like his teammate, Panasiuk adds to a formidable run-defense unit for the Spartans.

Bachie is a stalwart in run defense for the Spartans. His 82 stops in run defense are the second-most among Power-5 linebackers as he’s recorded 23 tackles for no gain or a loss against the run over the past two seasons.

No Power-5 linebacker played more snaps than Fisher last year as he finished with the third-highest run-defense grade in that group. He also racked up 49 defensive stops and forced four more fumbles, the latter tying for most among P5 LBs.

You may not have heard of him outside of the Minnesota and B1G circles but Durr is on the rise. He allowed only 47 yards after the catch and made two interceptions with four more pass breakups to boot last season.

Castro-Fields didn't give up a touchdown or a pass longer than 39 yards a season ago despite logging 319 snaps in coverage.

Stone got it done in coverage last season, albeit on a smaller sample size, seeing just 11 total targets come his way. Still, he intercepted four of those and broke up two more while allowing just 23 yards into his primary coverage.

With 20 defensive stops to his name, Fuller ranks inside the top 15 among all Power-5 safeties in that regard while also possessing a top-25 coverage grade.

Bootle finished third among Power-5 cornerbacks with 15 pass breakups last year and allowed just 50.0% of his total targeted passes to be caught.

Power-5's second highest-graded kicker, Justus knocked home 83.3% of his field goals last year including all 11 from 39 yards in.

Unleashing 77 punts a season ago, Korsak averaged 39.6 net yards a kick and pinned his opponents inside the 20-yardline on 25 attempts.