The 2019 season begins this weekend and with that, the full set of 2018 data officially becomes history. We look ahead towards the top-graded players returning in each conference, keeping things going with the Pac-12. 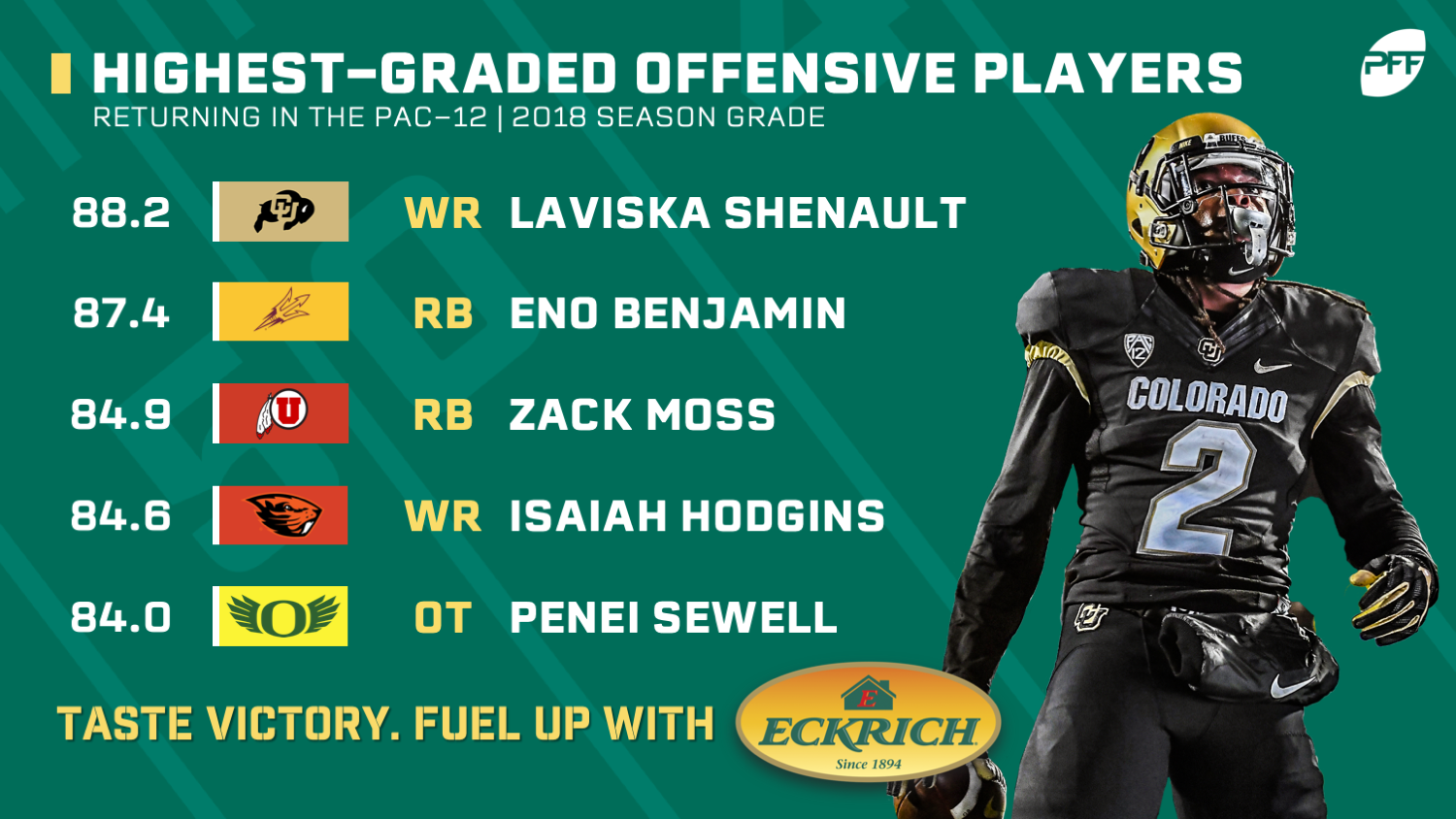 Costello returns with the highest grade among signal-callers as he was dominant in the intermediate and deep passing game. Herbert has the highest two-year grade of the returners while Huntley was on pace for a record-setting year in the PFF grade books before an injury.

Benjamin forced more missed tackles than any returning running back in the nation as his 84 missed tackles forced are 31 more than any back in the Pac-12. Moss rocked off 634 yards after contact while Jefferson recorded the second-most rushing conversions in the conference.

Shenault is the top of the class in the Pac-12, returning as the Buffaloes' top returning player overall. He forced 29 missed tackles after the catch and holds the conference's top receiving and overall grade at the position. Hodgins and Bradford give the Beavers the top 1-2 combination at receiver in the conference, contrary to prior belief.

The Utes have two of the top returning players at the position in terms of grade but Bryant is perhaps the nation's best tight end if he can stay on the field. He's a receiver in a tight end's body and has all the skills to translate to the NFL.

The Oregon Ducks return the nation's best offensive line with perhaps the best bookend-tackle situation with added depth at the valuable position. Sewell has the highest grade we've ever given to a true freshman tackle and Throckmorton was dominant across four different positions on the line. Jones played just 107 snaps of high-level play in relief of Sewell last season.

Lemieux is another shining example of the Ducks' top offensive line as he returns as the nation's highest-graded guard. His teammate, Dallas Warmack, was the highest-graded guard over the past three weeks of the season while Lavaka has the conference's second-highest run-blocking grade.

With the highest run-blocking grade among returning centers, Harris was no slouch in pass protection either. Hanson has logged more snaps than any returning Pac-12 center as he and the rest of the interior of the Ducks line combine for well over 5,000 career snaps. 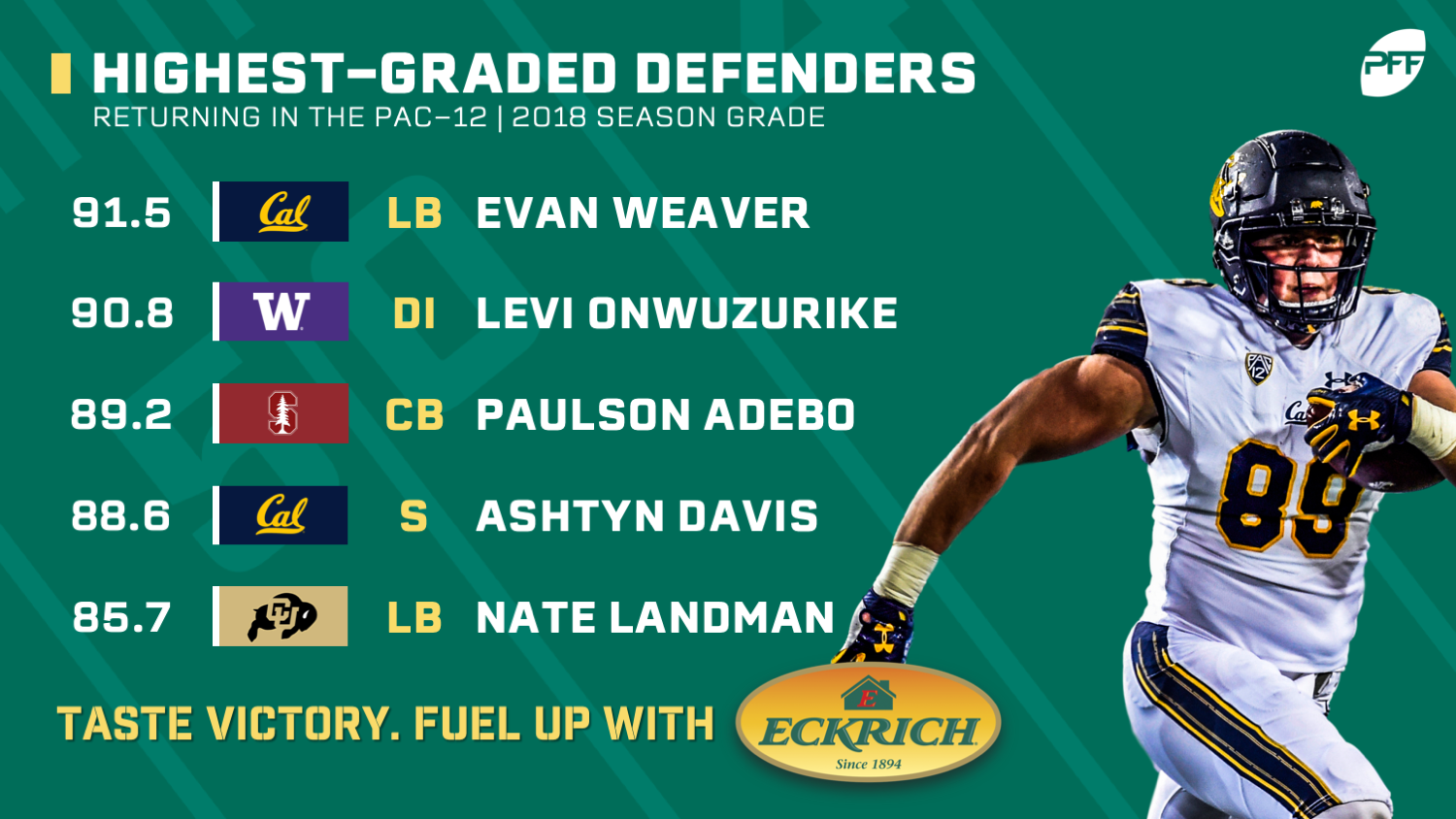 The conference's leader in total pressures from a season ago returns as Anae recorded 55 total QB pressures including 11 sacks. He's the conference's top returning edge defender in run-defense grade with his 41 total defensive stops leading the group as well.

Rocketing up draft boards and preseason lists before any games have been played, Onwuzurike returns as the conference's top-graded interior defender on his 391 snaps a year ago. Another solid outing and he'll climb all the lists even more so than he already has.

The Power-5's highest-graded linebacker returns to the Pac-12 as Weaver has top figures in run-defense grade, tackling grade, pass-rush and coverage grades. He recorded 18 pressures on just 85 blitzes and made 74 defensive stops.

Adebo led all college football last year with 19 pass breakups from a season ago as he also recorded four interceptions on his 78 targeted passes. Bynum and Graham each recorded top-notch coverage grades and Bryant is slated to be next in line from the DB Factory that is Washington.

Davis and Hawkins return and mark what is set to be an improved secondary for Cal. Davis was targeted 22 times as the primary coverage defender and came away with four interceptions and five pass breakups, stamping an awesome year for him.