How did Old Dominion pull off the upset of the year over Virginia Tech?

This week, Old Dominion completed one of the biggest upsets in college football, gaining their first win of the season, and their first win against Power-5 opposition since they joined the FBS when they overcame the No. 13 ranked Virginia Tech Hokies.

Needless to say, this was one of the biggest upsets of the year in any sport. The Hokies had yet to lose, while Old Dominion had lost 52-10 against Liberty in their season opener and were 0-3 heading into the game. The line was 28.5 points in Virginia Tech’s favor, so just how did Old Dominion get it done?

The star of the show for Old Dominion didn’t even start the game, but Blake LaRussa entered the fray on ODU’s second series to complete 30-of-49 attempts for 495 passing yards and five total touchdowns (four passing, one rushing) by the time the clock ticked zero. LaRussa posted one of the best PFF grades of the season, with an overall score of 94.3 and there was no facet of the game in which he was not outstanding.

Under pressure, he completed almost sixty percent of his passes (58.8) for an NFL passer rating of 109.0 and an overall PFF grade of 91.4, and that grade remained over 90.0 whether he was kept clean, blitzed or left unaffected in the pocket.

On deep passes (20-plus air yards), he completed 7-of-11 attempts for 205 yards and two touchdowns and some of the best throws he made in the game came deep down the left side of the field.

ODU put up 632 yards of total offense in the game, and LaRussa was the driving force behind all of that success, accounting for much of it himself, and posting an overall PFF grade almost 15.0 points higher than the next-best player on the team. 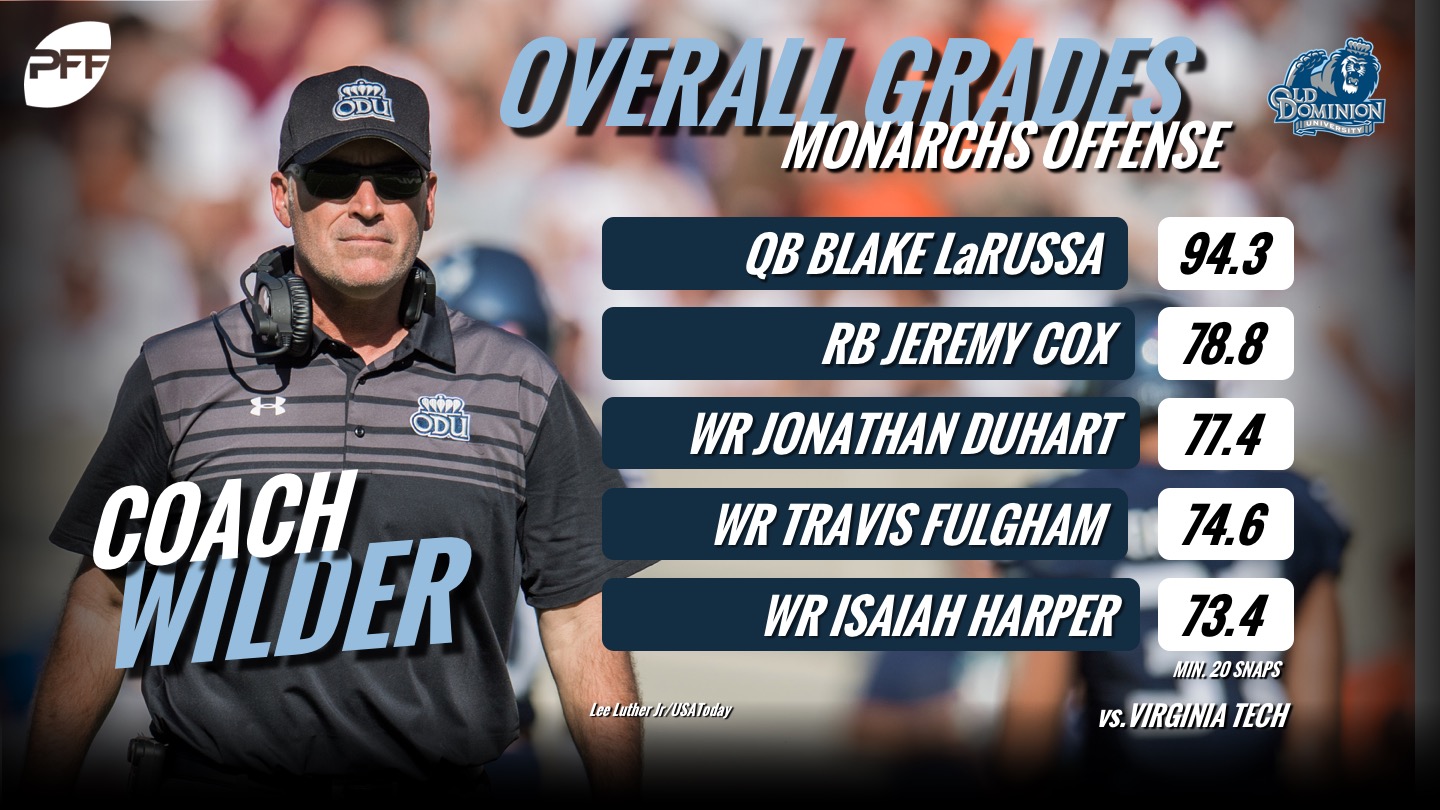 While the passing attack did the bulk of the damage, ODU running back Jeremy Cox also made some big plays, racking up 130 rushing yards on 20 carries. The biggest plays came to the left side of the field, with runs around left end going for 76 yards, two scores and three first downs. What makes this display from Cox so impressive is that the blocking was not phenomenal, and he actually gained more yards after contact than he had total for the day. Cox broke 13 tackles on 20 carries, and on average, was hit behind the line of scrimmage, generating 136 yards after contact from 130 rushing yards.

It was Cox’s 40-yard touchdown run with less than two minutes remaining that ended the game as a contest and sealed the upset.

The Hokies had held the lead in the third quarter, but ODU stormed back with a couple of scores before Virginia Tech found itself in a huge hole as quarterback Josh Jackson went down with a leg injury. His backup did lead them on a touchdown drive to tie it up, but he couldn’t match Jackson’s play (66.4 PFF grade to 72.2) and it wasn’t enough to win a shootout.

That’s not to say that Jackson was a certainty to get it done himself as he had completed just one of his four deep attempts (scoring on that play) while throwing an interception on another, and completed just two passes while under pressure (that went for zero yards). When ODU blitzed him he had a PFF grade of just 37.2 and his best plays in the game came as a rusher.

While ODU’s offense was the biggest differentiator, they had plenty of help from Virginia Tech’s defense. Just one player earned an overall PFF grade above 70.0, while 14 earned one below 60.0 and one of just 38.0. As a unit, the defense missed 16 tackles and managed just three forced incompletions from 46 pass attempts. They also coughed up six penalties and were nothing like the caliber needed to slow down LaRussa and the ODU offense.

As if usually the case, the quarterback was the biggest reason ODU was able to secure the biggest win in the program’s history, what was shocking is that it was a quarterback that didn’t even start the game. The junior quarterback had taken just 256 career snaps before this game and had been sitting behind Steven Williams, whose performances for the team have been more bad than good over the past two seasons.

LaRussa wasn’t perfect, but behind his eight big-time throws, he played one of the games of the college season so far to lead his team to one of the upsets of the year.