The Week 9 Eckrich Big-12 Team of the Week powered by PFF saw some impressive performances and, of course, the strength of opponent also factored into the overall selections as did the PFF player grades.

All four of the Big-12 games in Week 9 were separated by 10 or fewer points, with No. 5 Oklahoma's 48-41 loss to Kansas State at the forefront of college football headlines this week. And both Oklahoma State and TCU managed to claim upset wins, shaking up the conference that much more. 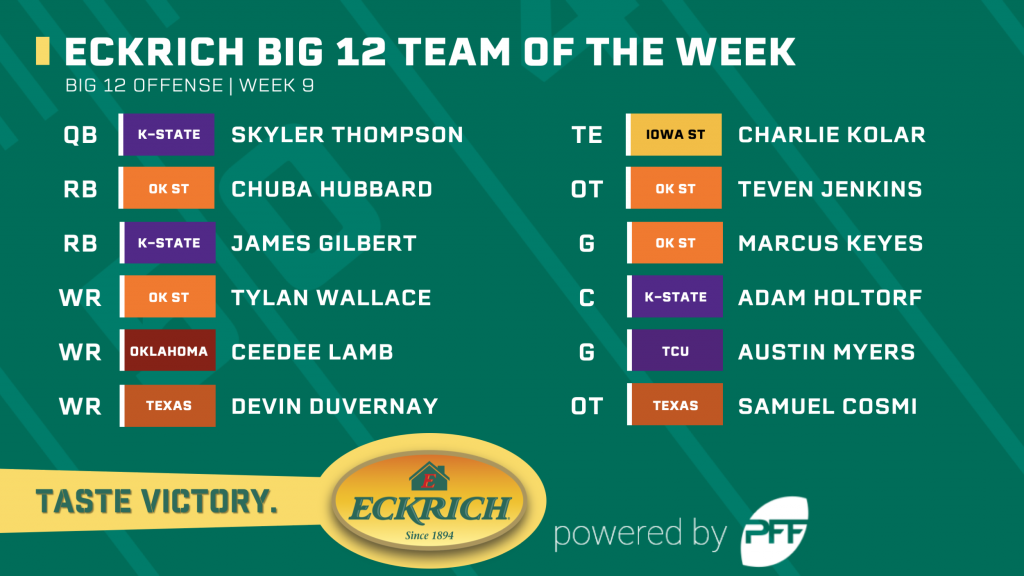 Leading your team to a win over a previously undefeated Oklahoma team warrants plenty of praise. Skyer Thompson remained poised Saturday, and while it certainly wasn't his best performance of the season, he tossed two big-time throws and had 69.5% of his passing yards come through the air — the second most a quarterback has managed against Oklahoma this season.

It's almost a guarantee to find Chuba Hubbard on the Big-12 Team of the Week at this point, with this marking his fifth time on the first-team offense. He averaged 5.0 yards after contact per attempt, leading all qualifying Big-12 running backs this week. And for the sixth straight week (and seventh time in eight games), Hubbard topped 100 yards on the ground.

On just 13 carries, James Gilbert crossed the first-down marker six times — the second-most among Big-12 running backs in Week 9. And three of those attempts went for 15-plus yards as GIlbert paced his Wildcats squad to a monumental upset of then-No. 5 Oklahoma.

If you haven't already, you should watch Tylan Wallace bully the majority of Iowa State's defense on his catch-and-run score Saturday. He was targeted 12 times against the Cyclones, reeling in eight of them for 131 yards — 111 of which came after the catch.

While a drop hurt Lamb's overall grade, he was effective as always. He hauled in 5-of-9 targets, racing past defenders in a similar fashion to Wallace to rack up 107 yards after the catch. Lamb also added a touchdown, the 11th time he has found the endzone in eight games this year.

Devin Duvernay continues to be a nightmare for opposing secondaries, this time to the tune of 21.6 yards per reception and four plays of 15 yards or more. And he continued his streak of having at least four first-down catches in every game this season, sitting tied for second among FBS wideouts with 43 chain-movers.

It was another week of Big-12 tight ends proving quiet on stat sheets — that is, aside from Kolar (again). He saw a whopping 13 targets, which was more than the five next-highest tight ends combined in the conference. Six first down catches and a touchdown were easily enough for Kolar to earn first-team status.

Teven Jenkins was clean in pass protection on Saturday on 25 pass-blocking snaps, and he held sturdy in the run game, too. Jenkins was one of only two Big-12 tackles to earn a run-blocking grade of 70.0 or higher on Saturday.

With just one pressure surrendered, Keyes was stout on the inside for Oklahoma State. He also helped spring running back Chuba Hubbard to yet another 100-plus yard game.

Adam Holtorf earned the top run-blocking grade among Big-12 centers in Week 9 while also allowing just a single quarterback hurry in pass protection. Surely, Skyler Thompson and James Gilbert were appreciative of his efforts as the Wildcats took down Oklahoma.

It was a rebound week for Austin Myers. After allowing three quarterback pressures to Kansas State last week,  he posted his second clean sheet of the season — with this one helping to propel his team to an upset win over Texas.

Samuel Cosmi is tied for the second-most pass-blocking snaps among Big-12 tackles this season, yet he's only surrendered one quarterback hit and one sack. Week 9 was much of the same, with Cosmi allowing a hit and a hurry on 58 pass-blocking snaps. 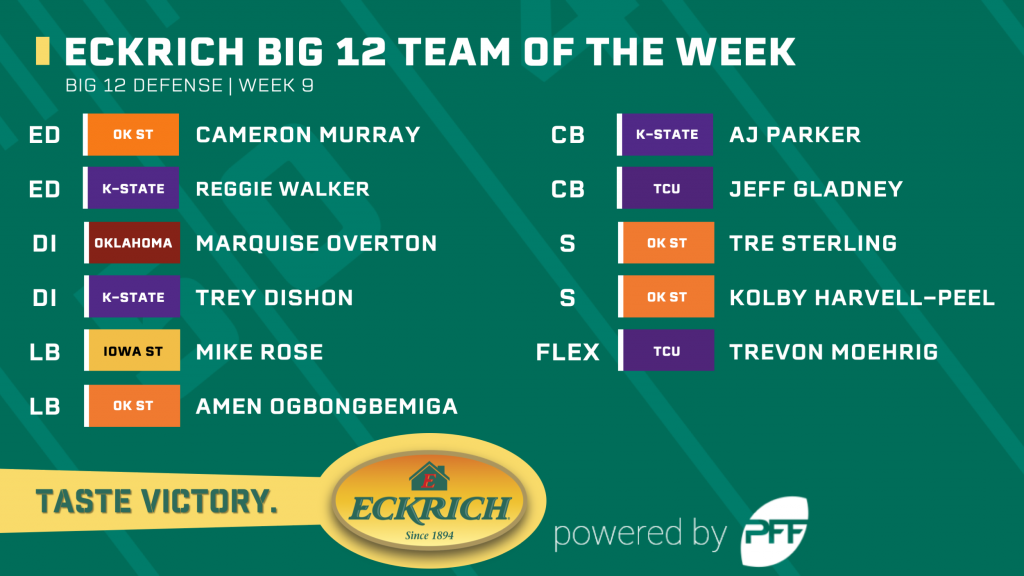 A conference-leading six pressures at the edge-rusher position in Week 9 earns Murray his place on the team of the week. Although five were hurries, Murray managed to easily surpass his previous game-best of three pressures in 2019.

Reggie Walker did a little bit of everything on Saturday, notching a stop and three quarterback pressures while allowing a single catch in coverage for a mere five yards.

It wasn't Oklahoma's day, but Marquise Overton was stout as a run defender. He piled up three run stops on just 18 run-defense snaps, giving him a 16.7% run stop rate that ranked second among Big 12 interior defenders this week.

Two more run stops and an elite coverage grade vaulted Mike Rose into the first team this week.  He faced three targets on Saturday, ultimately allowing one to be caught for just three yards while snagging an interception and recording a pass breakup.

Amen Ogbongbemiga was similarly stout in the passing game, facing five targets and allowing just 17 yards into his coverage. He also came down with a pick and tallied three stops.

AJ Parker was one of just two Big 12 cornerbacks to come down with a pick in Week 9. He finished the day allowing two completions into his coverage for only 25 yards.

Sam Ehlinger had it out for Jeff Gladney in Week 9, targeting him a whopping 17 times. Gladney employed a bend-don't-break mentality, allowing nine to be caught and holding his opposition to -11 yards after the catch.

An interception and 0.53 yards allowed per snap lands Tre Sterling on the Big-12 Week 9 Team of the Week. He also added two stops and a season-high nine tackles.

Kolby Harvell-Peel was the Big 12's most targeted safety in Week 9, but he held firm. Just five completions for 46 yards went into his primary coverage, and he has now allowed only 51% of passes thrown his way this season to be caught.

Trevon Moehrig broke up two passes, snagged an interception and allowed just 37.5% of targets thrown his way to be completed. He continued his elite season in coverage, where he now boasts a near-90.0 grade.