The Week 7 Eckrich Big Ten Team of the Week powered by PFF saw some impressive performances and, of course, the strength of opponent also factored into the overall selections as did the PFF player grades. 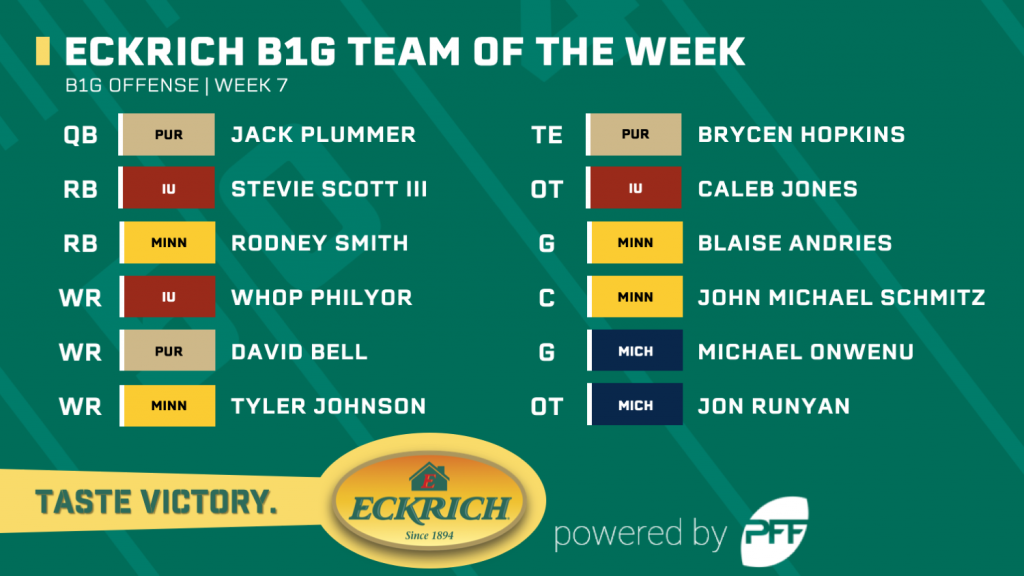 Plummer was in control all game against Maryland, completing a conference-high 33 passes on 41 attempts for 420 yards and three scores. He was moving the chains all afternoon as 20 of his attempts went for a first down — seven more than the next closest Big Ten quarterback for the week. On throws targeted 20-plus yards downfield, Plummer posted a perfect passer rating, going 4-of-5 for 148 yards and two touchdowns.

Scott III put on a show with his 12 rushing attempts versus Rutgers, generating 164 yards, seven first downs and five runs of 10-plus yards. The Hoosier running back averaged a conference-high 13.7 yards per attempt for the week, while 49 of his 164 yards came after contact for a 4.08 yards after contact average in the 35-0 rout.

Smith earned a spot on the Big Ten Team of the Week yet again this season after he and the Gophers ran all over Nebraska in their 34-7 victory. In total, he finished with 139 yards on the ground on 18 attempts. Of Smith’s total rushing yards, 91 came after contact — by far the highest in the conference for the week. He also forced three missed tackles, while posting seven first downs and four runs of 10-plus yards.

Philyor put up a casual nine reception, 178-yard day in Indiana’s 35-0 win against Rutgers on Saturday afternoon. The Indiana wideout forced three missed tackles and gained a conference-high 101 yards after the catch, while moving the chains on five different occasions.

Bell generated a perfect passer rating when targeted in Purdue’s convincing 40-14 win over Maryland. He hauled in nine catches on 10 targets for 138 yards and two scores, while converting a conference-high six first downs and totaling 53 yards after the catch.

Johnson made the most of his five targets on Saturday with five receptions for 109 yards. Three of his catches moved the chains, and 45 yards came after the catch. Among receivers with three or more targets for the week, Johnson’s 21.8 yards per reception average ranked second in the B1G.

Hopkins stood out from the pack in a major way among Big Ten tight ends in Week 7. The Purdue pass-catcher put together an impressive 10-reception afternoon for 140 yards and six first downs against Maryland. Hopkins’ 12 targets were five more than any other player at the position in the conference, while his 56 yards after the catch doubled up the next closest tight end for the week.

Jones had a clean afternoon at right tackle for the Hoosiers. He finished the day without allowing a pressure on 37 pass-block snaps in the 35-0 victory.

Andries finished the week with the sixth-highest run-blocking grade among guards in the conference on 49 snaps in the running game. While he had to pass-block on only 13 dropbacks, he didn’t allow a single quarterback pressure.

Schmitz helped control the line of scrimmage all afternoon for the Gophers, finishing as the top-graded center in the running game for the week. He paced a Minnesota offensive line that paved the way to over 320 yards rushing against the Cornhuskers.

Onwenu was dominant at his right guard position in Michigan’s 42-25 win over Illinois. He ranked as the top guard in overall grade and run-block grade, while finishing third in pass-blocking grade. He finished the week without a pressure allowed in 24 snaps protecting the quarterback.

Finishing with the conference’s highest run-blocking grade (in 47 run-block snaps) and second-highest grade among tackles, Runyan also finished the weekend with a clean sheet in pass protection. On his 24 pass-blocking snaps, he didn’t allow a single pressure. 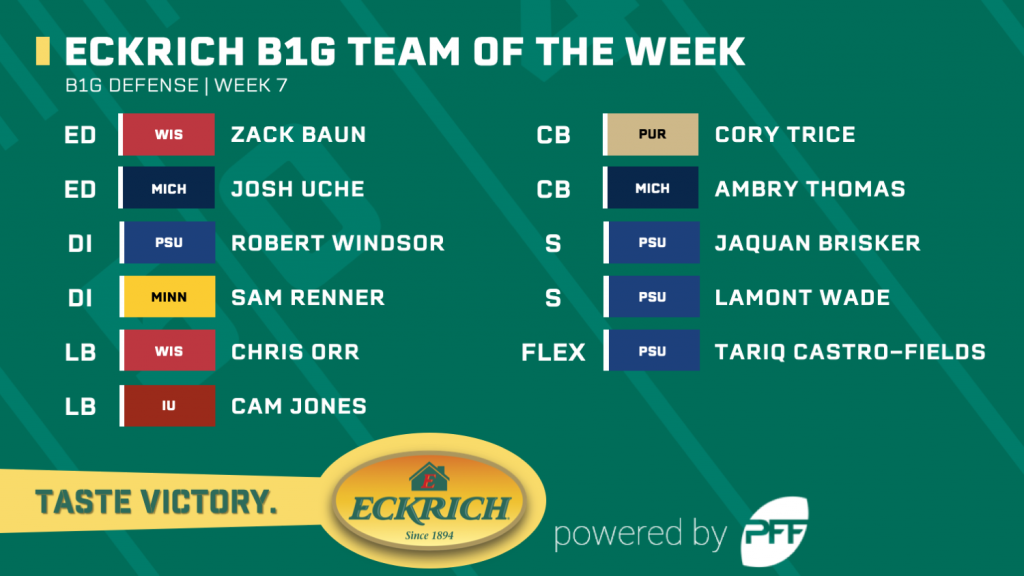 Baun finished the weekend with the top overall grade among edge defenders at 94.6. His versatility was on full display, making plays against the run, rushing the passer and lining up for seven snaps in coverage that resulted in an interception.

Uche was a standout among the Wolverine defense on Saturday afternoon with a four-pressure, four-defensive stop performance. Of Uche’s four pressures, two went for sacks, while another landed for a hit on the quarterback.

The Penn State interior defender was a menace all night in the team’s 17-12 victory over Iowa. He ranked as the top player at his position with a 91.2 overall grade, finishing with a conference-high six total pressures and three defensive stops. Of his six pressures, two went for sacks and one more ended with a quarterback hit.

Renner was a major reason the Gophers held Nebraska scoreless into the fourth quarter on Saturday. The standout interior defender wrecked the game to the tune of five pressures on the quarterback in only 24 pass-rush snaps, including one sack and two quarterback hits, and three defensive stops.

Orr was all over the field during his 37 snaps on Saturday for the Badgers. He generated the second-highest overall grade at the position for the week, impressing in multiple facets with three defensive stops, three pressures on the quarterback and one pass breakup in coverage.

Jones lined up for just 23 defensive snaps in Saturday’s 35-0 victory over Rutgers, but he more than made his presence felt in the contest. He registered three pressures on the quarterback on all three of his pass-rush snaps, including two sacks. Jones also tallied five defensive stops without missing a tackle, top-five at the position for the week.

Trice put on a show in coverage for Purdue, being tested on seven targets vs. Maryland. He allowed only one catch for 18 yards in the game with two interceptions and a pass breakup, resulting in a 0.0 passer rating allowed. He also recorded seven solo tackles without a miss and one defensive stop.

Ambry Thomas was in full shutdown mode on Saturday for Michigan, allowing only one catch for 12 yards on four targets in 43 snaps in coverage. He registered three solo tackles and two pass breakups, and his play in coverage resulted in a lowly 39.6 passer rating allowed.

The duo of Brisker and Wade at safety helped Penn State win a defensive battle in Iowa on Saturday night. Brisker generated the second-highest overall grade in the conference at the safety position for the weekend and tallied an interception late in the second quarter to stop a Hawkeye drive.

Wade saw the most targets in coverage among Big Ten safeties for the weekend, with 10 passes coming his way. He allowed only five receptions for a grand total of 23 yards, resulting in a 56.3 passer rating when targeted in coverage. In total, Wade recorded six total tackles without a miss and one defensive stop as Penn State remained perfect on the season.

Castro-Fields was a key part of the lockdown Nittany Lions’ secondary on Saturday night. He allowed four receptions for 66 yards on eight total targets in coverage with one pass breakup. Castro-Fields didn’t miss a tackle all game on five solo tackle attempts while finishing with two defensive stops versus the Hawkeyes.