The Week 5 SEC Eckrich Team of the Week powered by PFF saw some impressive performances and, of course, the strength of opponent also factored into the overall selections as did the PFF player grades. 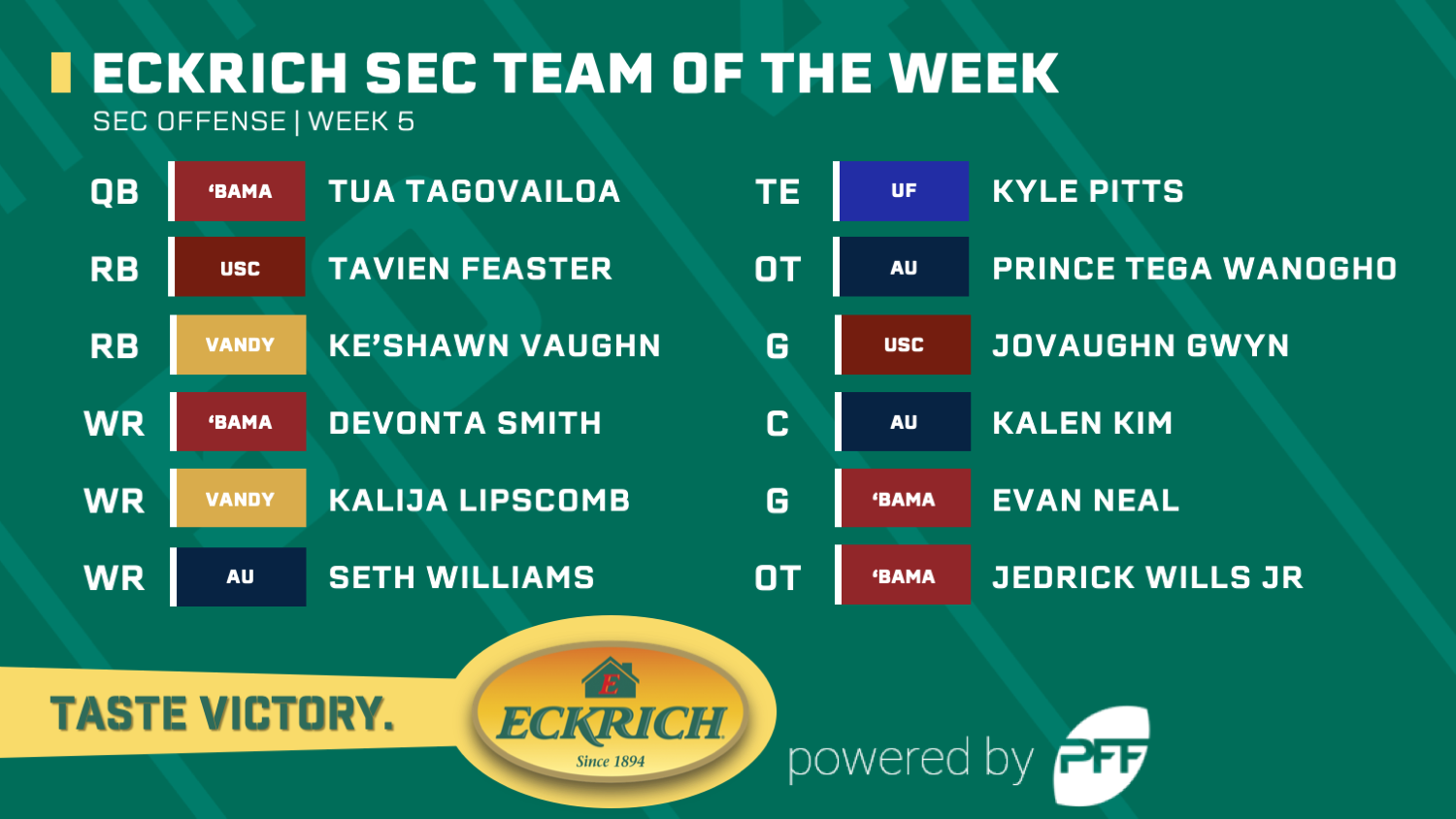 Tagovailoa needed just 25 completions to hit 417 yards through the air as he connected for six touchdowns against Ole Miss. He hit DeVonta Smith for five TDs and even ran one in himself to become the leader in touchdowns-responsible-for in Alabama history, cementing himself as perhaps one of the best college quarterbacks of all time. His dominance on full display, Alabama is now 2-0 in the SEC and has a week off to get ready for Texas A&M on October 12.

Needing just 15 carries to reach 107 yards, Feaster showcased his speed and balance with 85 yards coming after contact and forcing six missed tackles. He scored two touchdowns and four more carries recorded first downs for the Gamecocks in their victory.

Vaughn led the conference in rushing yards at 138, averaging 8.1 yards per attempt while ripping off seven first-down carries and another touchdown. He needed to break just one tackle and if it weren't for a fumble lost, his all-around game may have been good enough to crack the national conversation.

One week it's Jerry Jeudy. Another week it's Henry Ruggs. This week it's DeVonta Smith as the Alabama receiving corps are not only showing their strength and depth, they're dominating in the process. Smith produced a national-best 274 receiving yards on Saturday, on 11 catches as well as five touchdowns and three more first-down receptions. He gained 159 of his yards after the catch, forced four missed tackles and saw a perfect passer rating of 158.3 when targeted, obviously.

The only other SEC receiver to go over 100 yards, Williams hauled in eight receptions, scoring two touchdowns and securing three more first downs. He forced two missed tackles and like Smith above him, saw a perfect passer rating when targeted in the Tigers win over Mississippi State.

Lipscomb came on strong when called upon, averaging 13.4 yards per catch with 7.7 yards after the catch per reception. He forced two missed tackles after the catch and caught Vanderbilt's lone receiving touchdown on the afternoon.

Pitts churned out two touchdowns in short-yardage situations against Towson while also securing another first-down reception in an easy win for the Gators. What separated him from the list were his run-blocking snaps that saw him emerge as the team's highest-graded run-blocker in the contest.

The preseason nod for All-SEC finally lived up to expectations with a dominant performance for the Tigers. He allowed two hurries in pass protection and was downright dominant in the run game, paving the way for open lanes all afternoon.

Gwyn finished with an elite pass-blocking grade of 85.0 after he kept a clean sheet in pass protection while also paving the way for Feaster and Dowdle to have monster games on the ground.

Keeping a clean sheet in pass protection, Kim didn't allow a pressure on 27 pass-blocking reps while finishing with the conference's second-best run-blocking grade among all centers.

Neal led the way through the middle for the Crimson Tide, allowing just one QB hurry on 37 pass-blocking snaps while fielding a top-five run-blocking grade among guards in the conference.

A common theme, Alabama spots another player on the list as Wills had a sharp game across the board. On 41 pass-blocking reps, he allowed just one hurry and had the conference's top run-blocking grade among tackles. 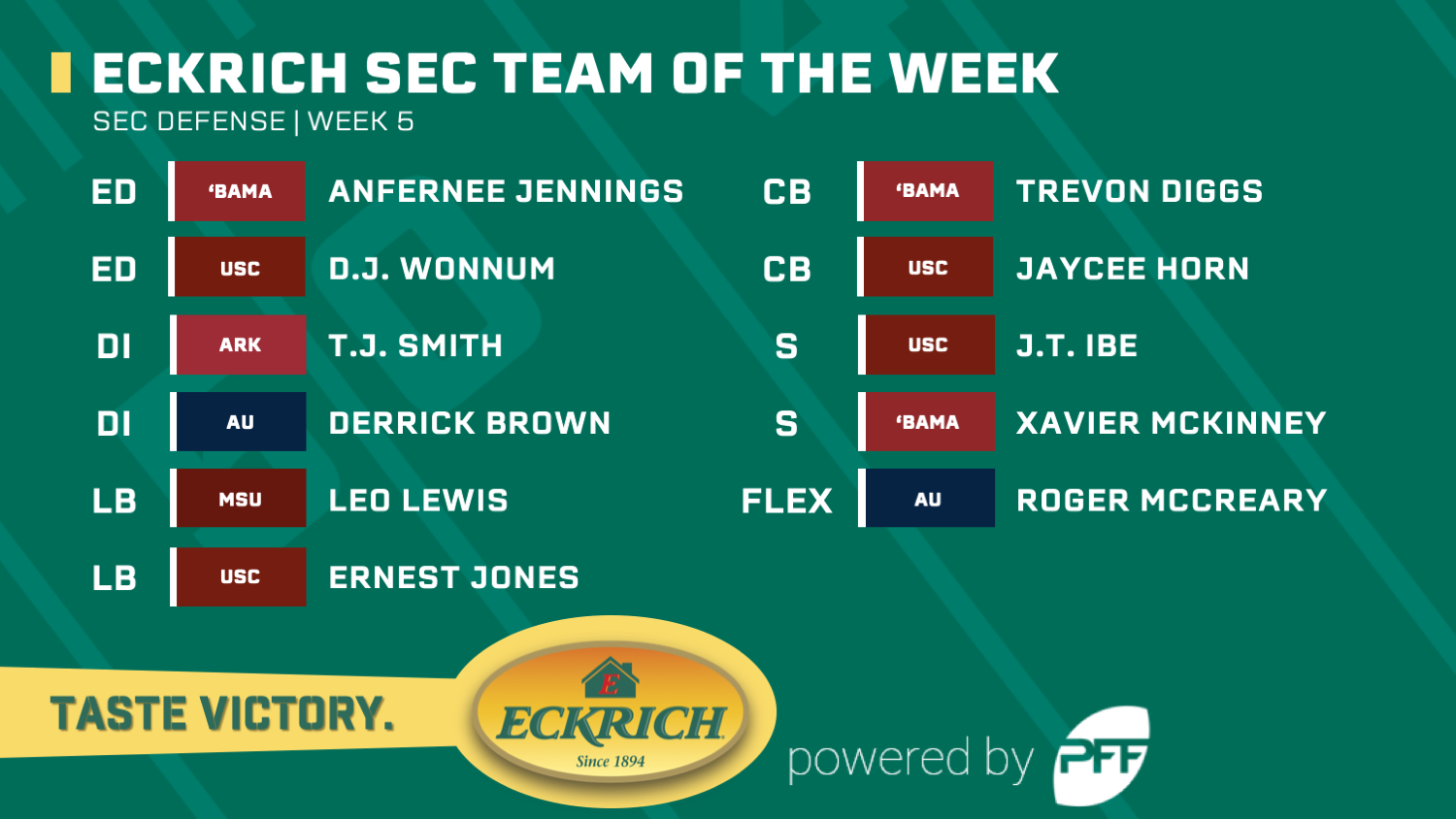 Jennings finished with just two QB pressures on his 17 pass-rushes but it was his effort in the run game that sets him apart here. He recorded six defensive stops on his eight tackles, and did so without a single missed attempt.

Wonnum played a great game, finishing with five total pressures that included three sacks. He had plus-grades across the board and even had two more defensive stops in the run game with a forced fumble to boot.

Smith and the Razorbacks didn't pull off the upset against Texas A&M but Smith was sharp in all facets. He recorded a sack and two more QB hurries while chipping in with a defensive stop in the run game as he ate up blockers in the middle.

Brown finished the contest with two quarterback pressures and a defensive stops as he required double teams on multiple occasions. He won the majority of his pass-rushes but didn't get to the quarterback before the quick pass left his hand in another dominant performance from the All-American.

The Bulldogs didn't get the win but Lewis was certainly not to blame. He was sticky in coverage, not seeing a single target come his way on 24 snaps, while he recorded four defensive stops in the run game and forced a fumble. He missed just one of his nine solo tackles and recorded a QB hurry on a blitz in an all-around noteworthy performance.

Jones joins Wonnum with a great all-around game, making an interception on one of the two targeted passes he saw in coverage and recording nine total tackles that included three defensive stops. As the primary coverage defender, Jones allowed just a 27.1 passer rating, much less than if the QB simply threw the ball into the dirt on every play instead.

Targeted twice in the game by Ole Miss, Diggs didn't allow a single reception and chipped in with three tackles from the secondary. Without a missed tackle to his name, two of his solo tackles went for defensive stops as he was pivotal in keeping the Rebels off their pace.

Horn and the rest of the Gamecock defense deserve a lot of credit for the win as Horn himself made two pass breakups and didn't allow either of the three targeted passes thrown his way to be caught. He chipped in with a stop in run defense and was stout all throughout the contest.

Ibe wasn't targeted as the primary coverage defender at all as he flew around the secondary with reckless abandon. He chipped in with four total tackles and no missed attempts as he was a missile to the ball for SC.

No shocker here, McKinney finished the game with 13 total tackles and no missed attempts to his credit while he added a QB hurry on one of his two pass-rushing attempts. he allowed a touchdown in coverage on the back end but his overall game was so strong, he certainly deserves praise.

McCreary was targeted five times in the contest and even with a touchdown allowed, was sharp throughout. He finished with plus-grades across the board and two pass breakups in coverage with another stop in run defense for the Tigers.