The Week 5 Eckrich Team of the Week powered by PFF saw some impressive performances and, of course, the strength of opponent also factored into the overall selections as did the PFF player grades. 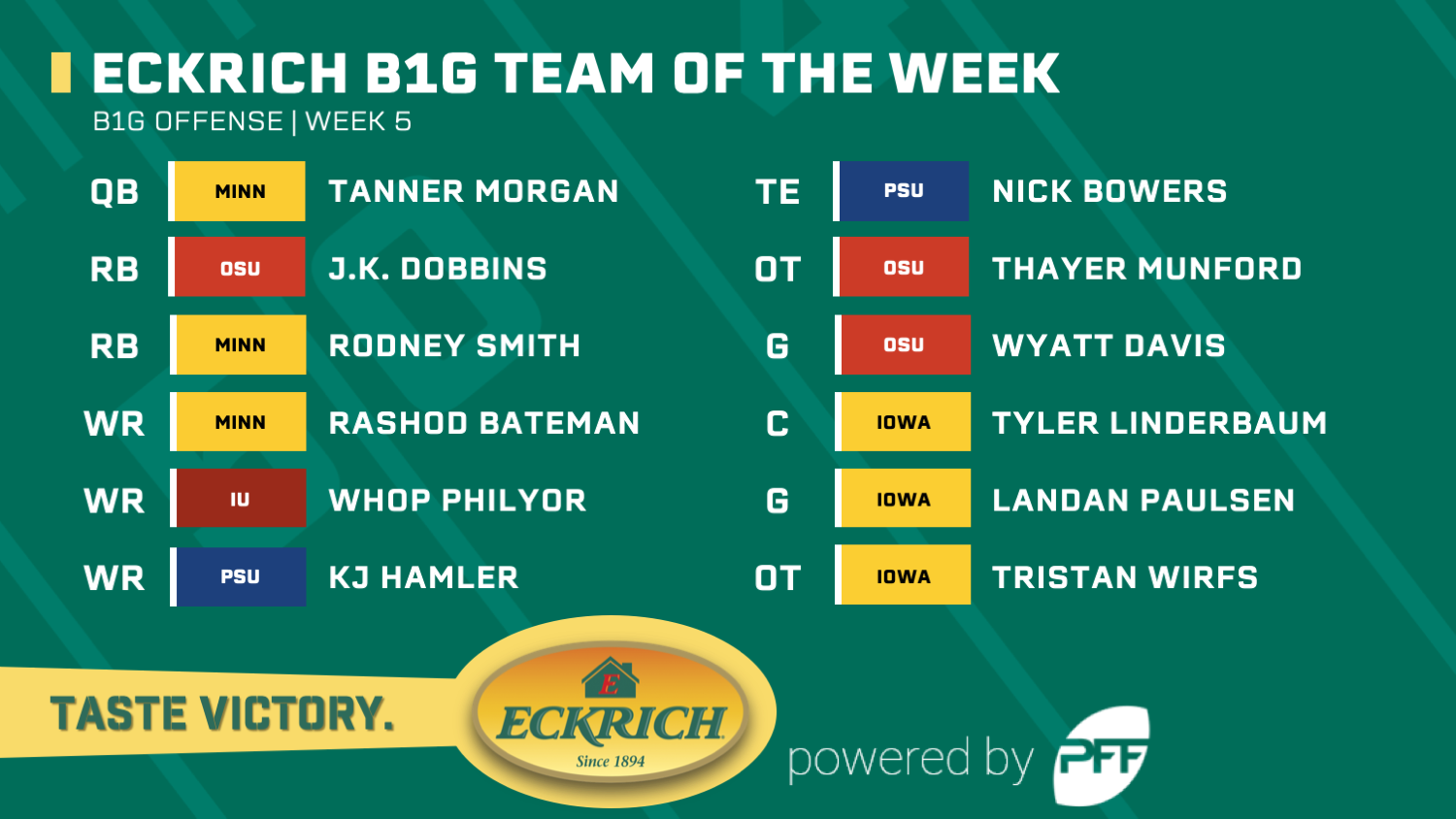 Morgan was ridiculously accurate in the Gophers win against Purdue, completing 21-of-22 passes for 396 yards and four scores. He was in the conversation for National QB of the Week, falling just short of Tua Tagovailoa's six touchdowns and Jalen Hurts display against Texas Tech but that is in no way a slight towards Morgan. More games like this and the Gophers are going to be more than just a surprise team in the Big Ten, they'll compete with each and every team they play.

Another week, another Dobbins big-time performance. He ran for 177 yards against Nebraska, needing just 24 carries to do so and forcing five missed tackles on the path to victory. While he didn't score a touchdown, he did secure 11 first-down carries as he consistently moved the chains for the Buckeyes.

Smith having quite the game is almost like a blast from the past as he climbs the Minnesota career leaderboards. He ran for 115 yards and a touchdown while breaking four tackles and gaining 66 yards after contact against Purdue.

Bateman's contested catch in the second half against Purdue was ultimately a game-changing moment as he feasted on the Boilermakers' cornerbacks opposite Tyler Johnson. Bateman snagged six balls for 177 yards, two scores and ripped off 56 yards after the catch for a perfect passer rating of 158.3 when targeted.

One of the more dynamic players in the conference, maybe even in the country, Philyor turned a whopping 14 targets into two scores and six more first-down receptions. He gained 90 of his 142 yards after the catch and broke two tackles en route to a big day.

Hamler's ‘routine-looking slant' route went for 58 yards and a score as he broke two tackles on the play and looked absolutely dynamic in the process. Penn State cruised past Maryland and Hamler was a big reason why.

Leading the conference in overall and receiving grade, Bowers needed just two targets to his 70 yards on the night as he gained 59 of his 70 yards after the catch. He had plus-grades in pass protection and in run blocking, rounding out a great night.

Sout in the run game, Munford led all Big Ten tackles with a 78.5 run-blocking grade while allowing just a single pressure in pass protection. He finished as not only the highest-graded blocker against the run but overall as well.

Davis was a stalwart in not only pass protection but also against the run for the Buckeyes against Nebraska in their big win in Lincoln. He allowed just one QB hurry on 29 pass-blocking reps while he paved the way against a stout interior of the Cornhuskers defensive line to the tune of the nation's third-highest run-blocking grade among guards.

Holding the nation's top pass-blocking grade among centers, Linderbaum was dominant in all facets for the Hawkeyes. He didn't allow a single QB pressure on his 30 snaps in pass protection while also finishing with the nation's second-highest run-blocking grade.

The Iowa offensive line was utterly dominant against MTSU, as represented by their placing of two offensive linemen on the list here. Paulsen locked down the left guard spot with a clean sheet in pass protection and a strong performance in the run game.

Wirfs turned it on in the run game with the conference's second-highest run-blocking grade while allowing just two pressures on his 27 pass-blocking snaps. He's as stout as it goes with a bevy of moves in both pass protection and in the run game. 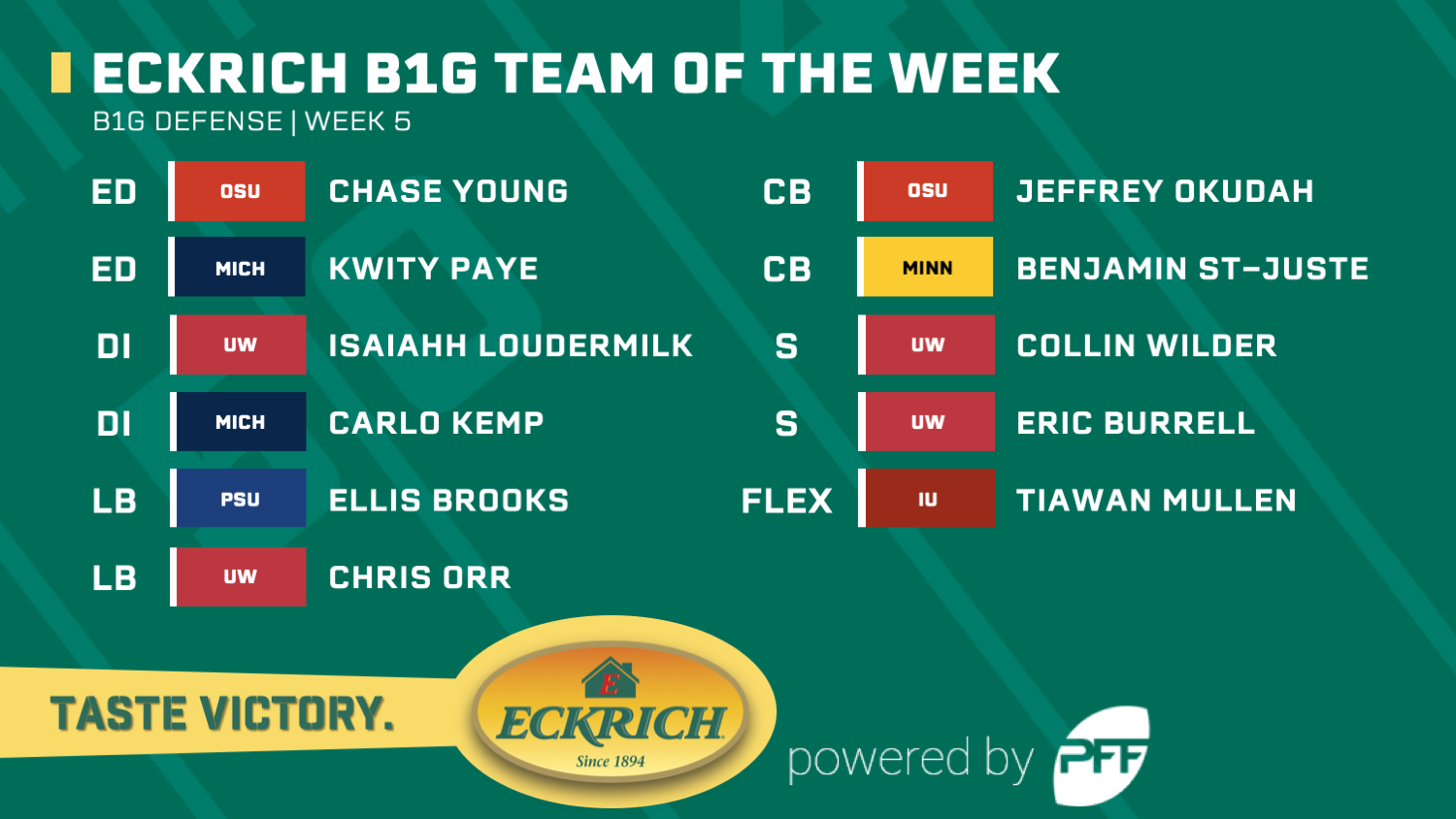 For the second time in as many weeks, Young finds himself on our list as not only one of the edge defenders of the week but as the highest-graded edge defender from the weekend. He needed just 11 pass-rush attempts to record five total pressures including a sack and a forced fumble. He recorded two additional stops in the run game to showcase just how well-rounded he is along the edge as perhaps the country's best defensive player.

Playing Rutgers certainly has its benefits and Paye saw those come to fruition. On 26 pass-rushes, he recorded four total QB pressures that including a sack and two QB hits while recording three additional stops in the run game.

Loudermilk didn't record a pressure in the pass-rushing game but that was no fault of his own. He won several pass-rush attempts but also had a stout game in run defense where he notched three total tackles and a defensive stop.

Kemp saw the benefit of playing against Rutgers as well, finishing with four total tackles against the run and a defensive stop. Like Loudermilk, he didn't record a pressure but won a handful of pass-rush attempts against his defender.

Brooks brought down three sacks on his seven attempts at rushing the passer in a truly dominant display of defense for him and the whole Nittany Lions defense. He was targeted once on his 14 snaps in coverage and allowed just two yards on the catch.

The second time in as many weeks, Orr was dominant in all facets. He recorded five total pressures including two sacks and had six additional stops spread across his run-defense and coverage snaps.

Lying on his back, Okudah had an interception fall into his hands, literally, as that's just how great the Ohio State defense played. He also made another play on the ball that showcased his football instincts, jumping a route and securing a brilliant contested interception. For the day, he was targeted just once, making the interception and chipped in with another defensive stop in coverage.

Targeted six times on the afternoon, St-Juste allowed just two receptions to go for 14 yards and allowing all of just one yard after the catch. He broke up three passes in his primary coverage and saw just a 42.4 passer rating as the primary coverage defender.

Wilder was all over the field for the Badgers in this one, recording two pass breakups on his three targeted passes in coverage and recorded a sack on a blitz. He had four solo tackles and two of them were credited as defensive stops.

No shocker here that Burrell joins the list with Wilder as Burrell finished the day with a pass breakup and three defensive stops to go with a sack and three total tackles without a missed attempt.

Mullen is nearly topping the charts among true freshman defensive players as he was targeted a whopping seven times against Purdue and didn't allow a single reception. He had four pass breakups in the game and now has allowed just one reception on 12 targets this entire season.